Not every apartment has a spacious bathroom. At the same time, you always want to place in it the necessary amount of plumbing, served by water fittings. Bathtub faucets with long spout can simultaneously serve both the bath and the sink, provided they are located next to each other. By installing such a mixer, you can save money on the purchase of an additional mixer for a washbasin. In addition, you do not have to overload the already small bathroom with additional wiring pipes. It remains only to choose a model that could correspond in its characteristics to an increased intensity of operation. 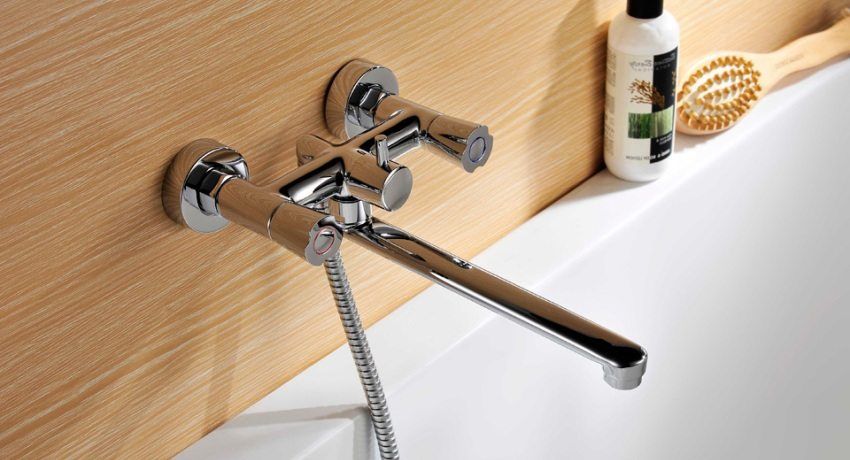 Bathtub faucets with long spout. Which model to choose

Model faucets with a shower for a bathroom with a long spout are available for a long time, but the demand for them, as practice shows, does not decrease. Despite the fact that manufacturers offer a huge number of new models, many briefly reflect on which one to choose. Bathroom faucets with a shower, having a long gander, are quite versatile in use and have a convenient configuration: you do not have to hold the tank in weight, waiting for water to collect in it; in case of using the sink, the swivel spout can be easily guided for maintenance. 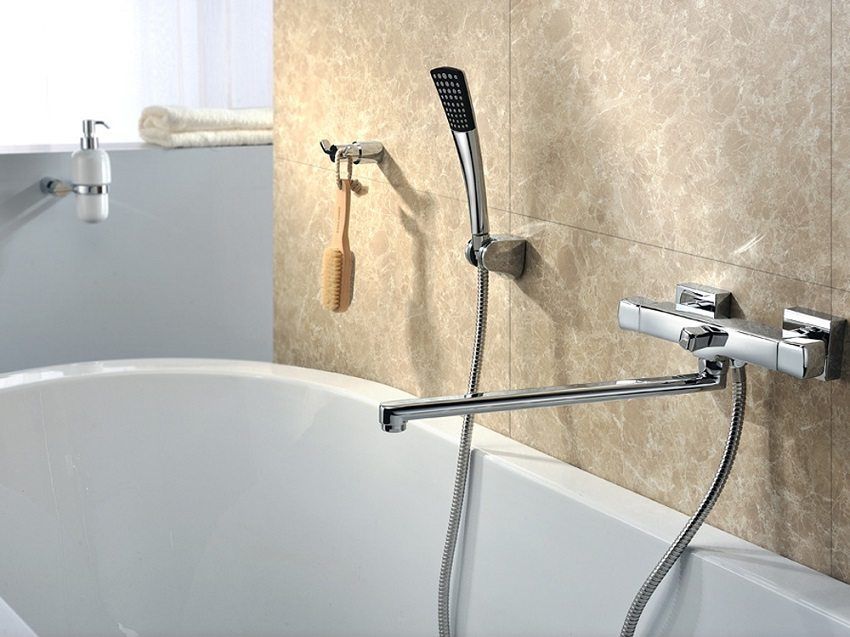 Well proven faucets with a shower for the bathroom with a long spout Russian manufacturer Rossinka Silvermix. Spout mixer has a modern flat shape, equipped with a plastic aerator with easy cleaning. The model range includes products with a round spout, with different angles of inclination, with single-lever and two-valve control. Models are available to an extensive circle of buyers, the price varies from 2,800 to 5,600 rubles. All models are warranted by the manufacturer. 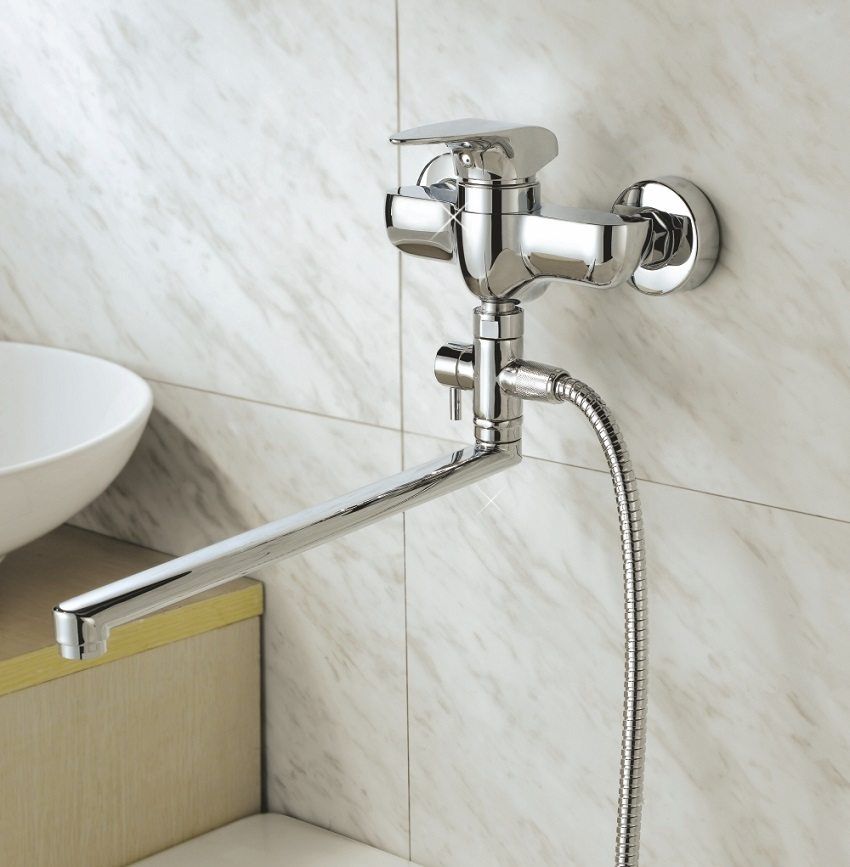 With a photo of the faucets for the bath with a shower can be found on thematic sites. 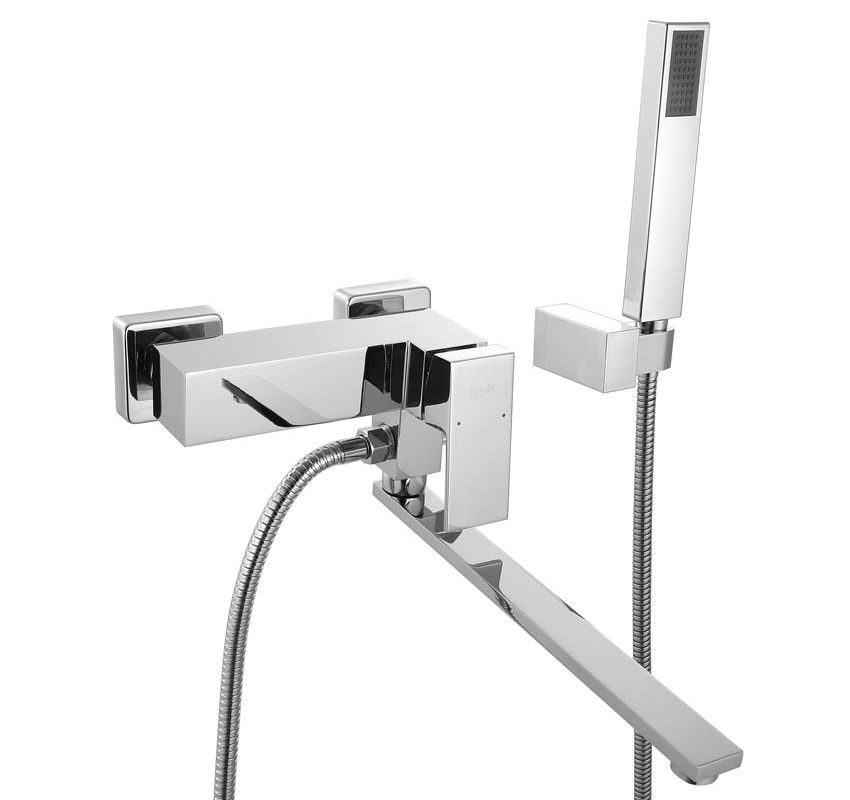 By design, bathroom faucets are two-valve and single lever. The body of the mixers is usually made of stainless steel, the cartridge is made of ceramic. The composition of the two-valve model includes a node unit (crane box), by means of which the water supply and temperature are regulated.

This classic version of the mixers is popular in the market, it is enjoyed by supporters of the classics and retro. Two-handle models serve rather long and their price is relatively low. Among the shortcomings it is worth noting the rapid failure of the rubber gaskets of the crane-axle box, which must be changed from time to time.

Prices of bathroom faucets with shower in a two-valve version are in the range of 2000 rubles. up to 6,000 rubles. – These are models of manufacturers from Russia, China, and Turkey. The cost of models from brands Astracast (UK), Bandini (Italy), Grohe (Germany) will be much higher.

Cases of single-lever (mono-command) mixers are also made of brass. Such mixers are controlled by a single lever: the lever moves upwards to regulate the flow, turning it to the right / left changes the temperature of the water. Single-mixers can incorporate a ball or ceramic cartridge. In the ball mixer the regulating head is made of stainless steel.

Ceramic cartridge is arranged in the form of two dense plates of metal-ceramic. The technology of high-temperature firing of ceramics allows to achieve high wear resistance. Stainless steel is used for fastener parts in single-lever mixers.

Helpful advice! When choosing a ball mixer model, it should be borne in mind that in the event of a breakdown, repairs will be expensive, as the ball module will need to be replaced. To extend its life will allow the cleaning filter for water.

To give metal products durability they are covered with a layer of chromium. In addition, this coating prevents the growth of bacteria on the surface. In some samples you can find glass or malachite valves.

You can get acquainted with the rating of the best bathroom faucets with shower (photos, prices are indicated) on the respective manufacturers websites. Among them are the following brands: 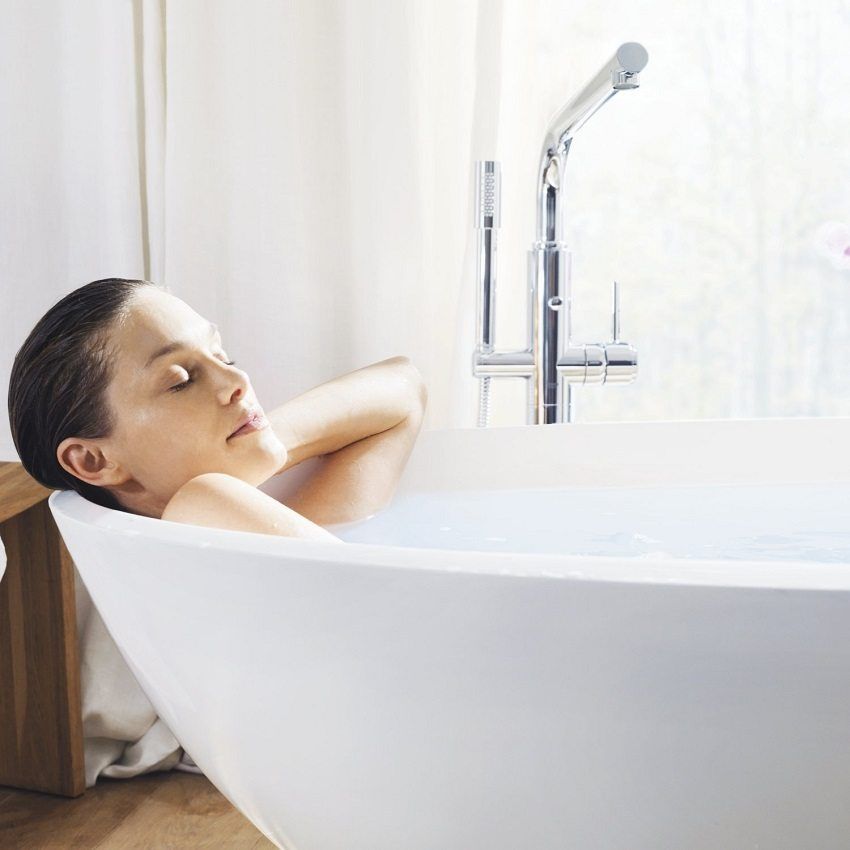 Despite the popularity of the usual bathroom faucets with a long spout, many prefer the more modern models. Choosing a suitable model of bathroom faucet, you should pay attention to the appearance of the structure and its assembly. The range presented by manufacturers of plumbing is quite diverse: from small models and faucets with hygienic shower to massive structures. 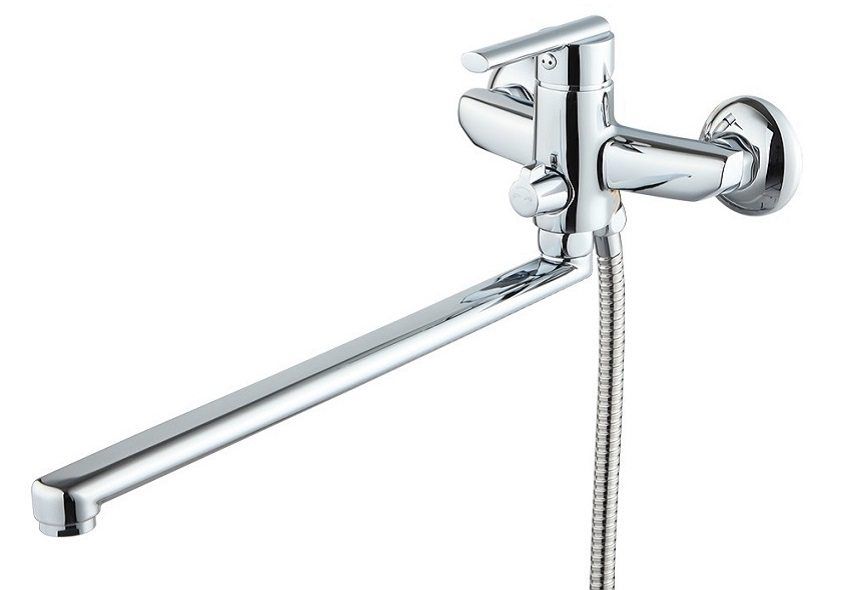 By purchasing a shower rack with a mixer, you will get ready to connect the headsets. Installation of such mixers involves only the withdrawal from the wall of hot and cold water. Often, these faucets are equipped with a rain shower, shower head and a hose.

The design of some products allows you to adjust the watering can to the required height – for an adult or a child, as well as to move the watering can in a horizontal plane. Some models are equipped with different nozzles to obtain the desired effect: from a strong pressure with a massaging effect to a soft relaxing. 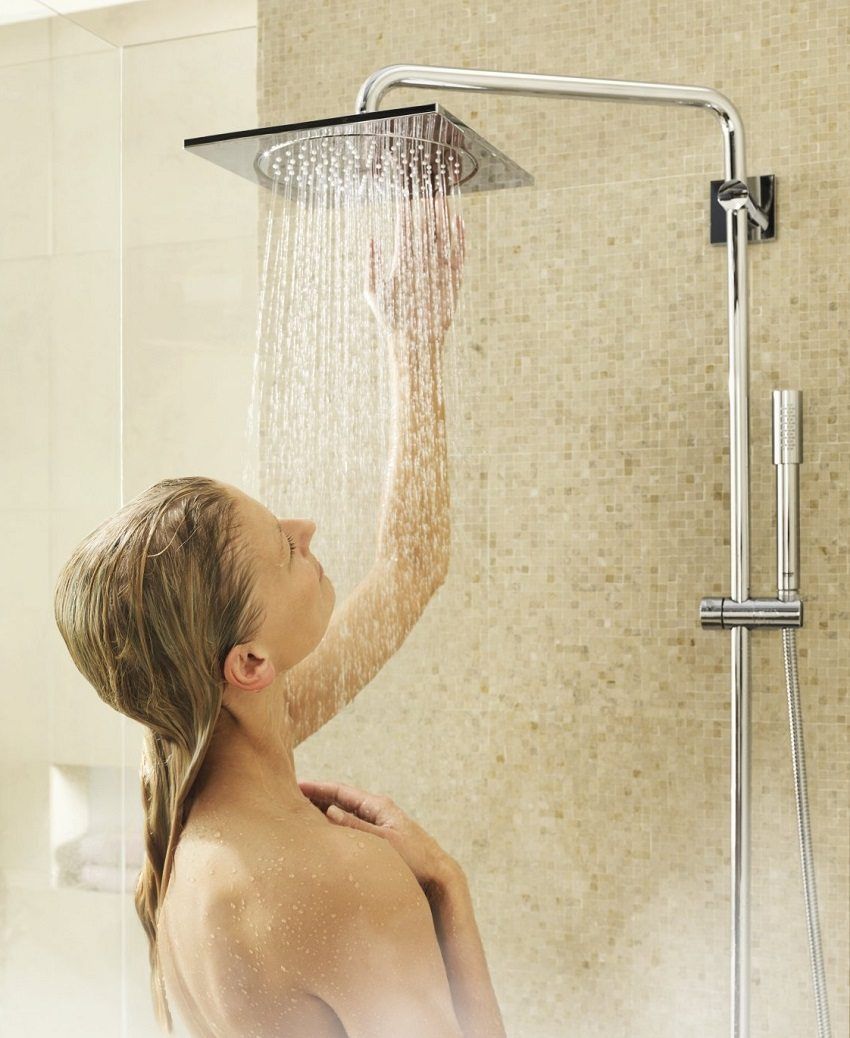 An important feature of shower racks is versatility. For the models of bathroom faucets with a rain shower for the convenience of making various accessories: shelves, hooks, stand, soap dish. Shower mixers with various watering cans and spouts will provide the desired water treatment. All products have a manufacturer’s warranty from three to five years.

Design features shower racks allow you to mount them to the wall or set on the floor. Popular corner stands, they are compact and take up little space.

Models from manufacturers such as Brovat (Germany), Valentin (France), Timo (Finland) are in demand. Products differ in refined design and the corresponding cost. 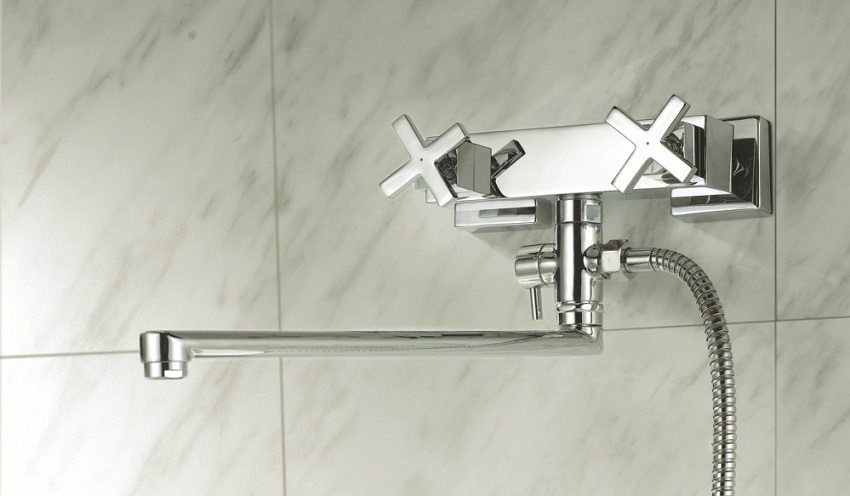 Models of some shower racks with overhead shower and spout allow, in addition to taking a shower, to fill the bath with water. The design of racks is equipped with a spout and a switch on the spout. This model will suit cascade shower lovers.

Raspberries – a very common and many favorite berries. The fruits ripen early, smell

How to calculate the stairs to the second floor: the main parameters of the calculation. Features of complex structures

Solar lamps for autonomous illumination of the garden and the plot

Rebar gauge: the right choice as a guarantee of reliability and durability of the structure

Artificial stone for countertops as an alternative to the natural counterpart

How to build a cheaper house: cheap, budgetary and fast DIY construction from scratch

Well on the water with their own hands: effective methods of drilling

Spunbond: what it is, material capabilities and efficiency of use