The article details the answer to the question of why plastic windows in the apartment are sweating from inside the room. The text contains a complete overview of the causes that influence the state of window structures and the formation of condensate on their surface. On the basis of these data, effective ways are offered to solve the problem of fogging of glass in an apartment and a private house, as well as on the balcony. 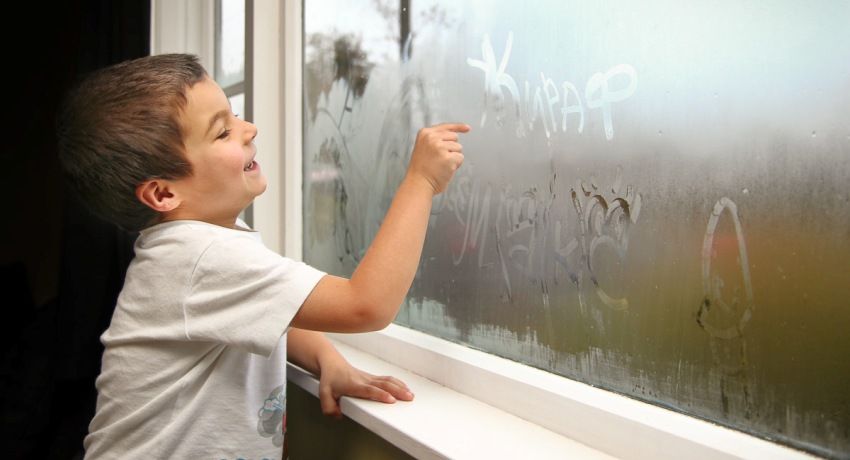 Why are plastic windows inside the apartment sweating: nature of condensate

If the plastic windows constantly accumulate moisture, do not ignore this problem. The presence of condensate can create favorable conditions for the development of fungal spores and mold in the apartment. In order to permanently get rid of excessive moisture, you need to figure out why plastic windows in an apartment are misted and to eliminate the cause causing this effect. 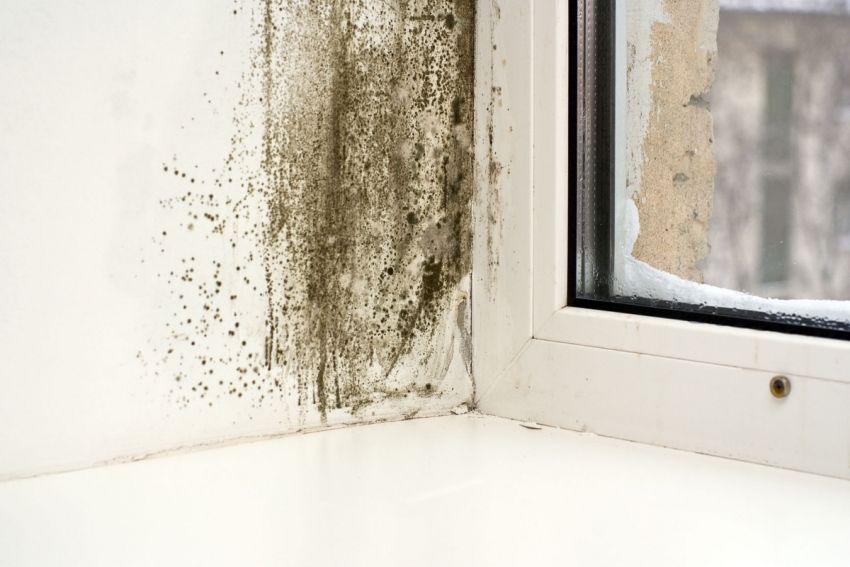 Moisture that accumulates on the glass surface of windows is called condensate. Its appearance is due to impaired normal evaporation. The air contains a small amount of water vapor. It is formed during the drying of linen or cooking products in the kitchen, from human breathing, etc. When the temperature decreases, the water makes a transition from a gaseous to a liquid state, as a result of which condensate settles on the glasses.

Some types of materials are free to pass water vapor, so no condensate forms on their surface. Glass is not included in the number of these materials. It creates a kind of barrier to the smallest particles of water contained in the air, which entails the appearance of droplets on the surface of the window. Glass is not able to retain heat, so it is always cold. The lower the surface temperature of the window directed into the room, the higher the likelihood that drops will appear on it.

If the windows in the apartment mist over, this indicates problems with the indoor microclimate. 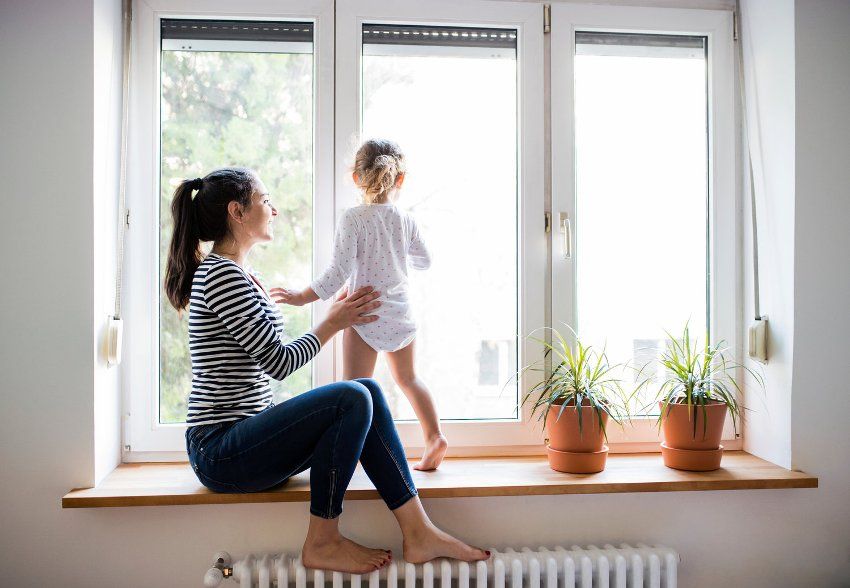 If everything is in order with the circulation of air flows in the room, even the most cost-effective double-glazed window with the simplest design will not mist over, so if such a problem arises, you should definitely determine its source. In some cases, it is enough to slightly correct the window construction, and sometimes it may be necessary to completely replace the defective glass unit.

Note! The temperature that converts the water contained in the air in the form of steam into a liquid state is called the “dew point”. 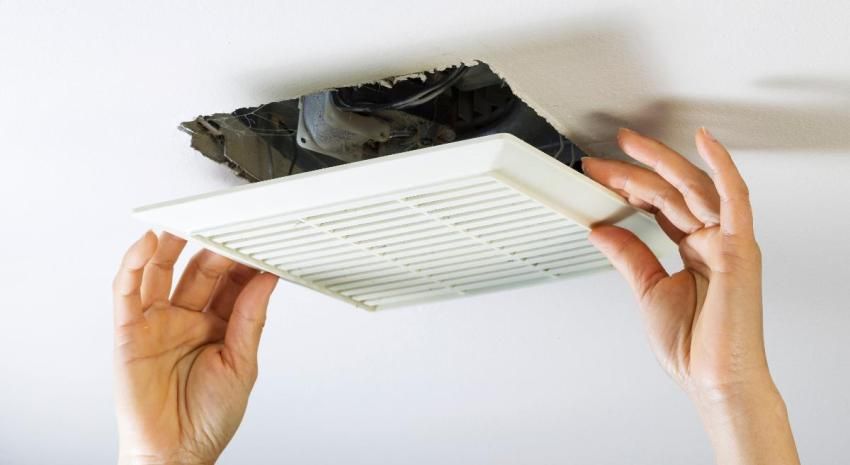 Fogging on windows in winter is not uncommon. At the same time together with dampness frost may appear on the surface of the structures. In this case, plastic windows in the apartment fog up due to the presence of the difference between the temperature parameters of the glass unit and the microclimatic conditions in the room.

This may be due to enhanced heating when the room temperature reaches 25-29 ° C. Typically, heating systems are designed to balance the microclimatic conditions in the room. Due to the intake of cold air from the street, the temperature decreases from the cracks if the heating in the apartment is intensified. When replacing wooden windows with sealed glass packs, this function disappears. The absence of gaps leads to an increase in temperature and humidity levels, as a result of which condensate accumulates.

Another reason why plastic windows are sweating in the apartment is the formation of cold bridges. They contribute to the cooling of the window sill, because of which there is a difference between the temperature of this element and the air in the room itself. In such a situation, you need to measure indicators. Condensation occurs if the differential exceeds 5-7 ° C. 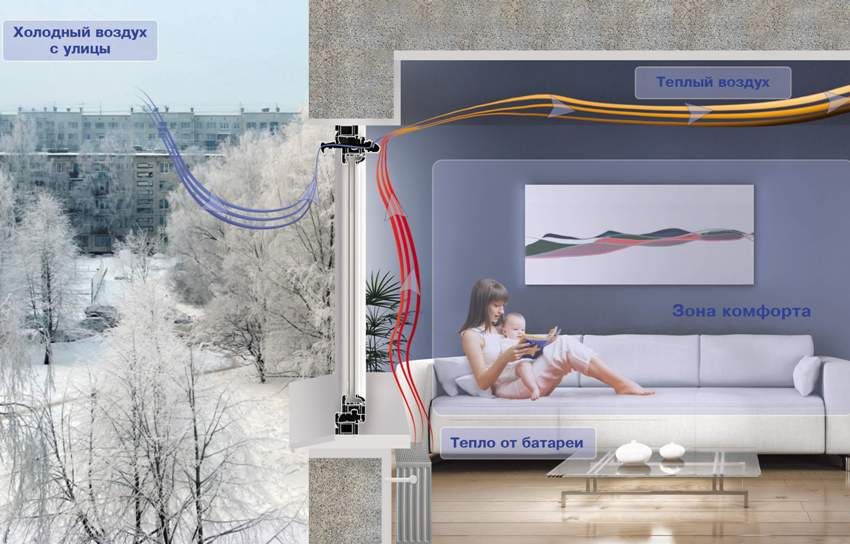 In addition, fogging windows in winter helps blowing. The most common source of draft is the porch. If there is a rip under the lower loop, it freezes. This can be noticed without measuring temperature indicators.

To understand why plastic windows in the house sweat from the inside, one should study the features of these structures. When repairing is performed indoors, a frame is installed in the opening, on which the doors are fixed. They can be both stationary and mobile. The number of valves is not limited to one or two. It depends on the configuration of the window. Glasses are placed parallel to each other so that between them formed free air space. Inside is a frame made of aluminum, and a material that absorbs moisture.

Due to this structure eliminates the likelihood of condensation inside windows. If the installation is made with violations, inside the structure can get moisture. A similar effect occurs when the sash is installed intermittently. Heat and air penetrates into the glass unit, which causes condensation and, in the future, mold. In this case, so that the windows do not fog up, it is better to contact an experienced technician who will correctly perform installation work. 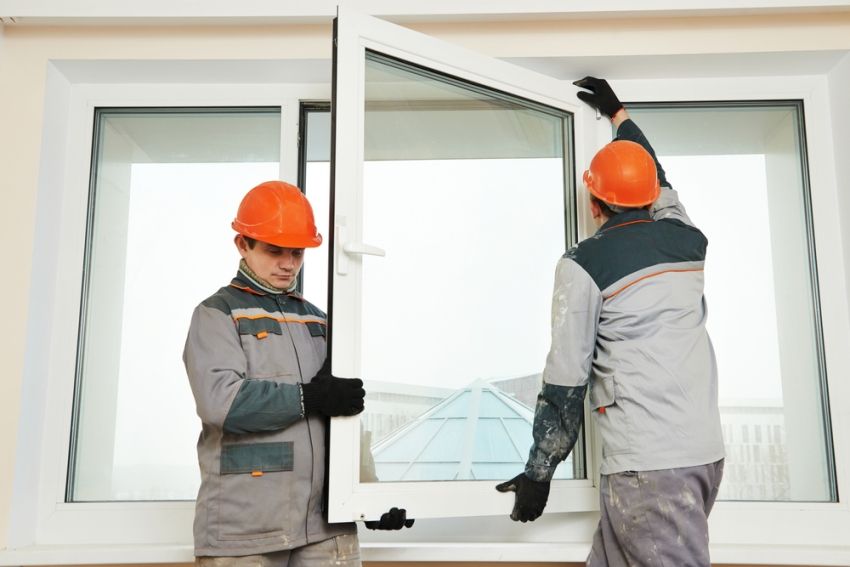 Note! In the design of a metal-plastic window there are internal mechanisms and accessories. If it is not timely to figure out why windows in the house sweat, the constant impact of condensate will significantly reduce the service life of these elements.

The formation of condensate on the glass may be due to the presence of factory defects. To avoid the difficulties associated with dismantling and replacing the window, it is advisable to carefully inspect the product in the store before purchasing.

Factory defects include the following defects: 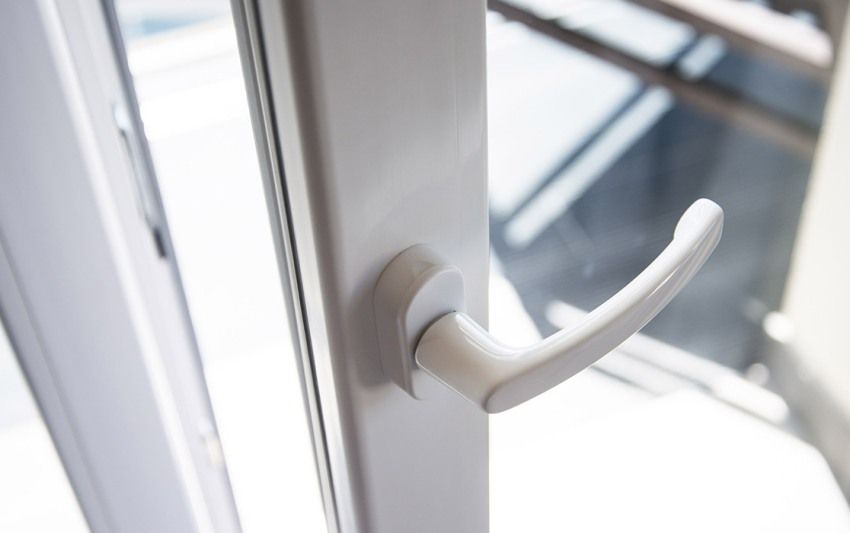 The manufacturer is responsible for the quality and tightness of window designs. Even the slightest deviation from the standards can cause significant problems. During operation, such plastic windows sweat and flow, what to do in this case depends on the nature of the defect. Most often, simply installing a new glass unit. If the manufacturer keeps track of its reputation, then in the presence of a factory defect, poor-quality construction is replaced free of charge.

The presence of cracks is one of the reasons why the windows in the apartment sweat. Such damage occurs if the process of transporting or assembling structures is done carelessly. Many apartment owners turn a blind eye to minor cracks appearing on the windows, which is a mistake.

It is not recommended to try to mask the damage with glue or putty. This approach will not bring results, but only takes time and money. Cracked glass must be replaced. The only way to protect the house from the appearance of fungi and drafts. 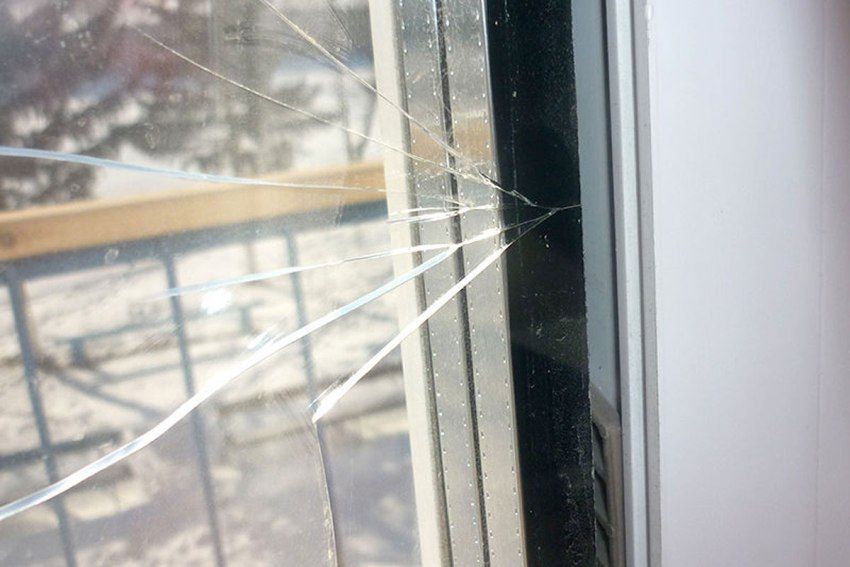 Single-chamber window designs have only one layer. The space between the inner panes is minimized, which may cause misting. The size of the gap is less than 3 cm, which significantly affects the insulation of the window, reducing its level.

Helpful advice! It is not advisable to install single-pane windows in a residential area. Such designs are poorly retain heat. Such savings are very doubtful. The low price of these products does not at all justify the low technical parameters that the buyer ultimately receives.

Many finishing materials have low levels of steam permeability. In some cases, it may be completely absent. This property of finishing is necessary in order that water vapor was removed outside the room and did not accumulate on the glass in the form of condensate.

The primer is widely used as a finishing material before installing glass packs. Its use adversely affects the level of vapor permeability of the coating. Flizelinovye and vinyl wallpaper, despite the approval of manufacturers, also have a bad influence on this figure. 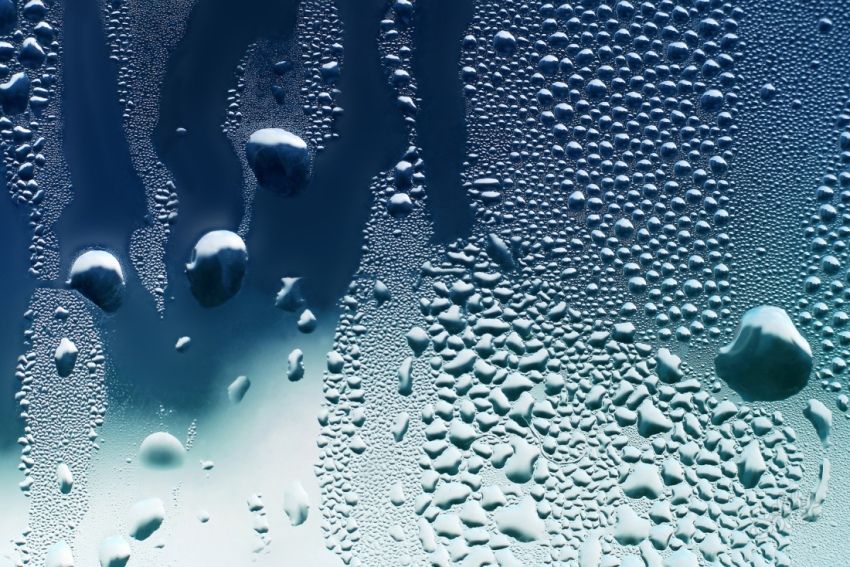 It is worth noting that double-glazed windows sweat more strongly than windows with wooden frames. This is due to the fact that natural material has good throughput, unlike plastic. Through the pores that wood has, unnecessary moisture is drawn out of the room and enters the street.

Initially, poor-quality sealing material is the basis for the rapid emergence of cracks through which heat is leaking. As a result, constantly accumulating condensate provokes the development of fungal spores. Similar problems with insulation occur in violation of the installation of windows, improper removal of measurements from the frame, as well as poor fixation of glass.

Temperature drops can cause condensation. To understand the mechanism by which the process is proceeding, and to understand why plastic windows mist over, it will be necessary to consider the basic laws of physics. When water evaporates, its particles rise into the air and remain as vapor in one of its warm layers. 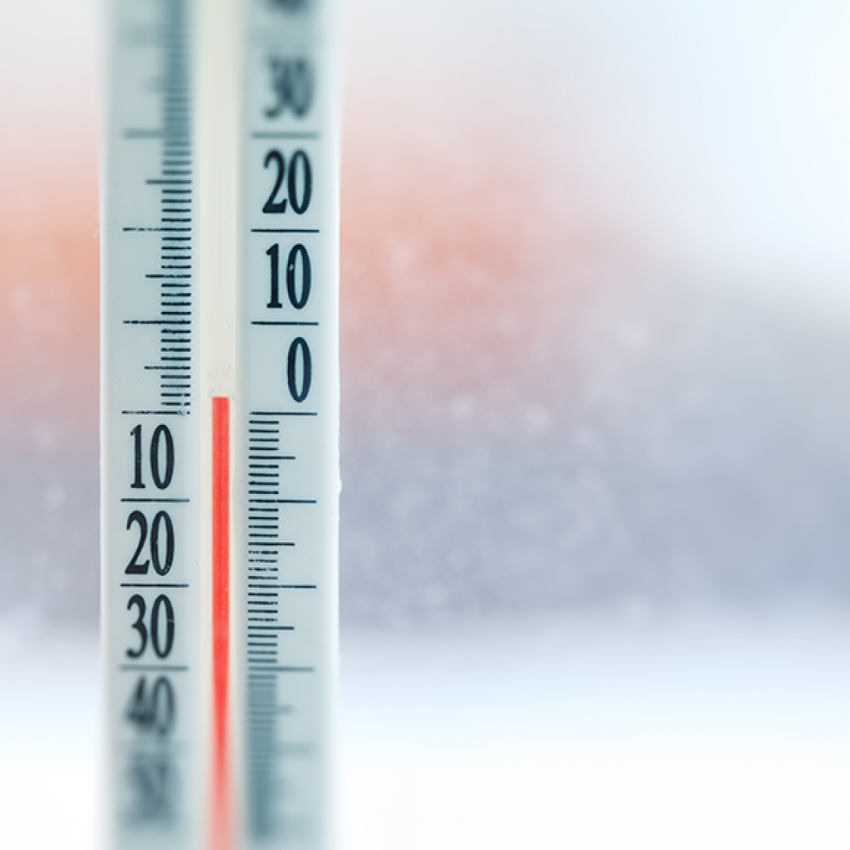 In rooms, moisture acts differently. The air in the rooms has about the same temperature, so the droplets rush to the cold surfaces. In the bathroom, condensation is formed on the tile, and in the living rooms – on the windows. From the street on the window affects the flow of air that cools the glass. If the room temperature does not reach the optimal level, the windows are not able to warm up. That is why windows mist over in winter.

There are many nuances that affect the operation of windows. If there is condensation on the glass in the house, you can independently identify the cause of this problem. To do this, it suffices to check the operational performance of the room and the quality of installation of the structure itself.

To eliminate the risk of moisture on the glass in the future, it is advisable to maintain an optimal level of humidity and temperature in the room, as well as to clean the ventilation holes and exhaust in the kitchen in a timely manner. All this will not worry about the condition of the windows and protect the house from mold and dampness.

Heated floor in recent years has gained deserved popularity. What pipes for underfloor heating
A unique offer for you

Expanded clay in bags or in bulk: how to calculate the volume of material

Blinds on plastic windows: aesthetic decoration of the openings

What a better humidifier: how to choose the best device

Corrugation hood: easy installation and ease of use

Paint on metal for outdoor use: types of compositions, their advantages and disadvantages
//zuphaims.com/afu.php?zoneid=2466924