Textured plaster “bark beetle”: the photo clearly displays this, is today one of the most popular and sought-after facing materials, which is convenient in application and is able to create not only a beautiful coating, but also protect the base from negative environmental influences and mechanical damage. More information about this versatile material can be found in this article. 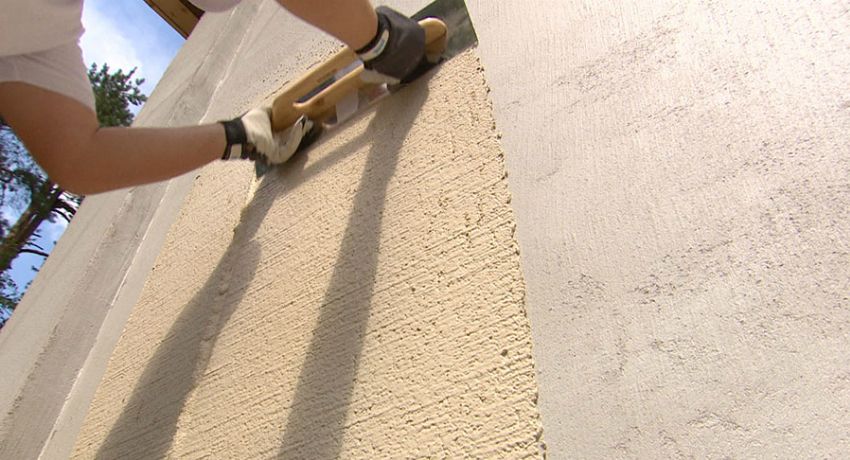 The name of the material was due to the fact that it creates a surface that resembles the structure of a tree eaten by bark beetle larvae. The surface of the plaster has a striated structure. These furrows have a different direction, size, depth, length and accuracy. 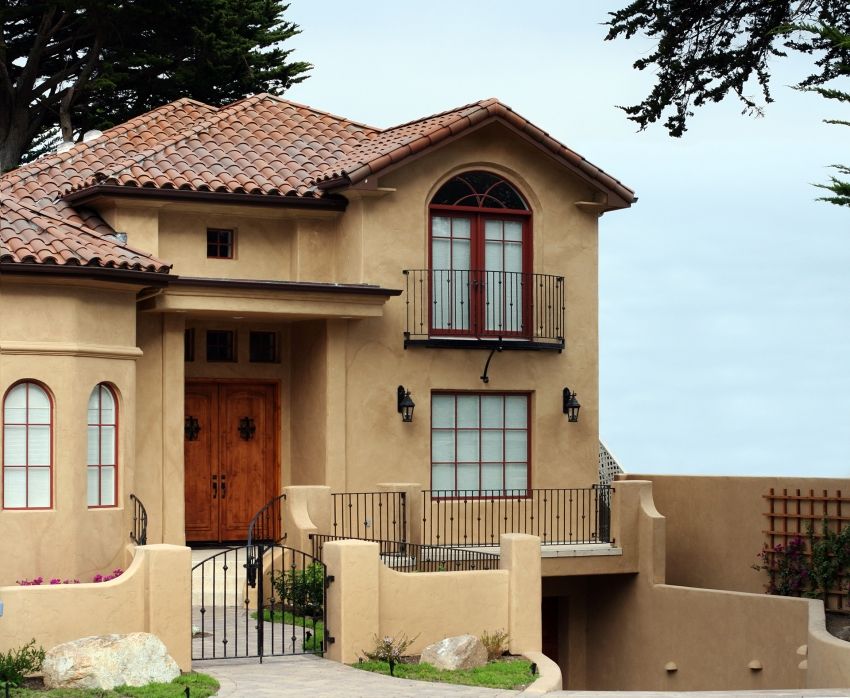 Plaster consists of two fractions: small, in the form of a filler, and large – granules. The granules are round stones of approximately the same size. They determine the width of the grooves, the thickness of the layer and the consumption of plaster “bark beetle”. The number of granules in the material determines the accuracy of the pattern.

The principle of applying “bark beetle” plaster, the video clearly displays the sequence of actions, is as follows: when a material with a thickness approximately equal to the size of a large fraction is applied to a flat surface with a metal spatula, these same granules begin to push the filler, creating furrows. To make the granules move horizontally, vertically, crosswise or in a circle, you can use a rectangular plastic trowel. Thus, a pattern resembling wood, eaten by bark beetles, is formed. 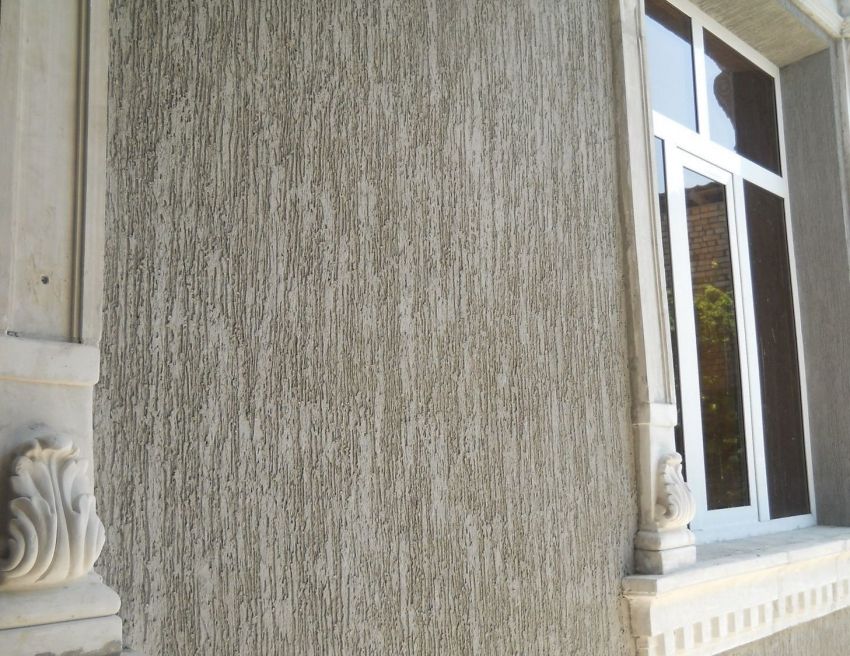 When applying decorative “bark beetle” plaster to the surface, one should not put too much pressure on the trowel, because the longer and more thoroughly the material is rolled out, the less noticeable the characteristic pattern will be. The surface in this case will be glossy, as when using Venetian plaster in the interior of the house, a photo of which displays this effect on the surface of the walls.

Helpful advice! The material should not be laid too thick, which will cause cracks to appear on the surface soon. 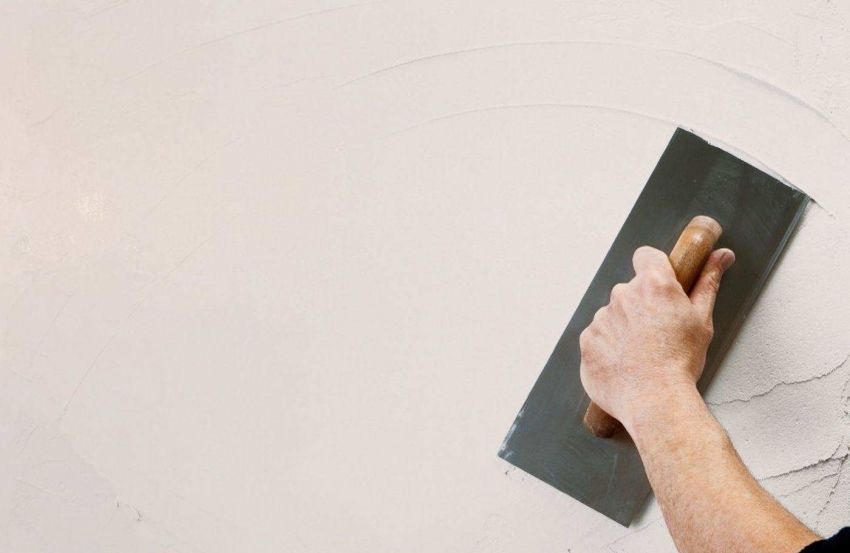 The composition of the bark beetle plaster contains granules of a certain size, which determines the marking of the material. The size of the fractions can be from 0.8 to 3.5 mm. On this basis, it is possible to determine for which works this mixture is suitable. For example, if the packaging is marked with K20, it means that there are granules, 2 mm in size.

Most fine-grained plasters with a size of fractions from 0.8 to 1.5 mm are suitable for interior decoration of rooms, and material with large fractions from 2 to 3.5 mm is used for plastering facades. Photo examples clearly show the resulting texture effect. 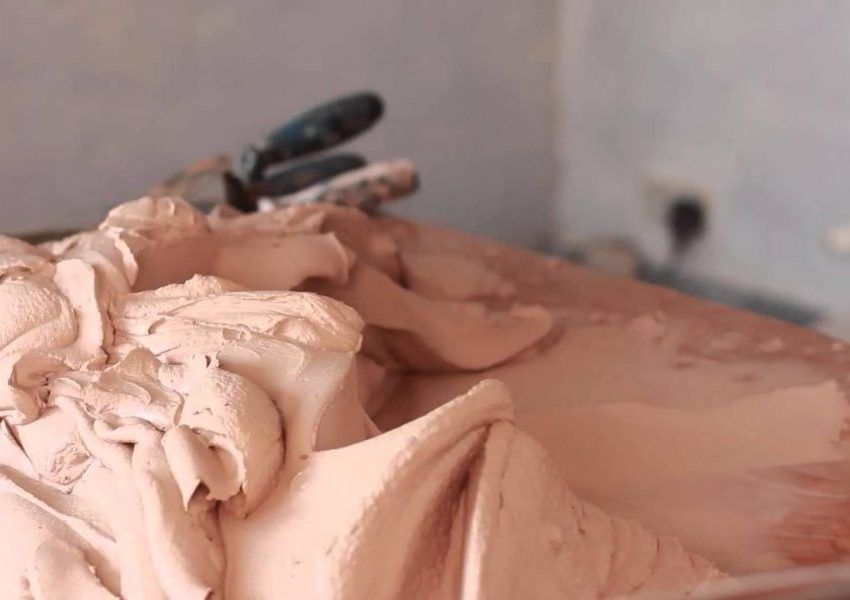 The size of the granules affects the depth of the furrows in the finish and the consumption per 1 m2 of bark beetle plaster. So, the compositions with larger fractions have a higher consumption than with small patches. Plaster with granules of 2 mm consumed 2.5 kg per 1 m ?. At the same time, the material consumption with 0.8 mm granules is about 1.8 kg per m ?.

It is worth considering that the price per bag of bark beetle plaster with smaller fractions will be much higher. This is due to the complexity of the technology of filtering grains. 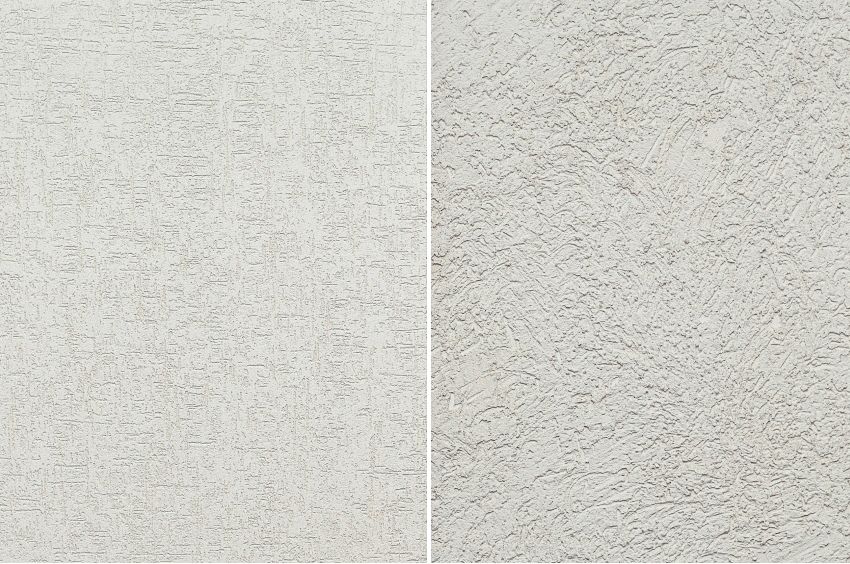 The advantages of this facing material are: 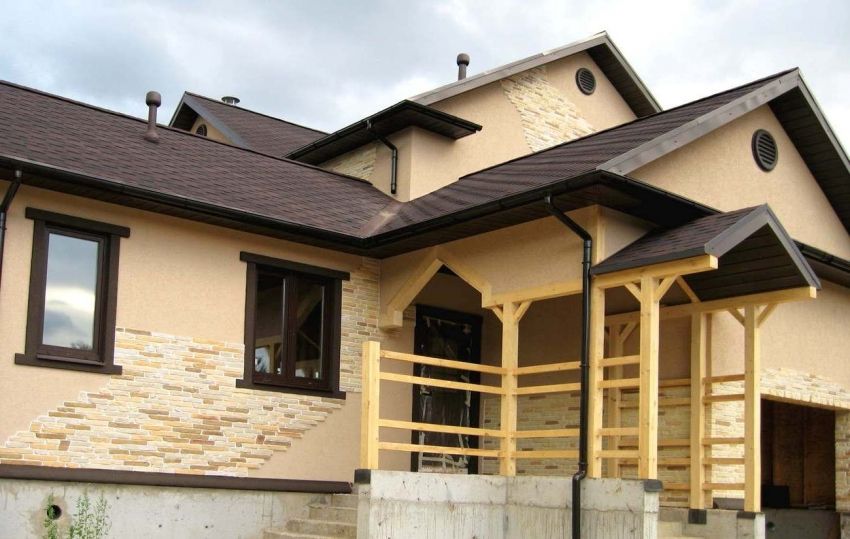 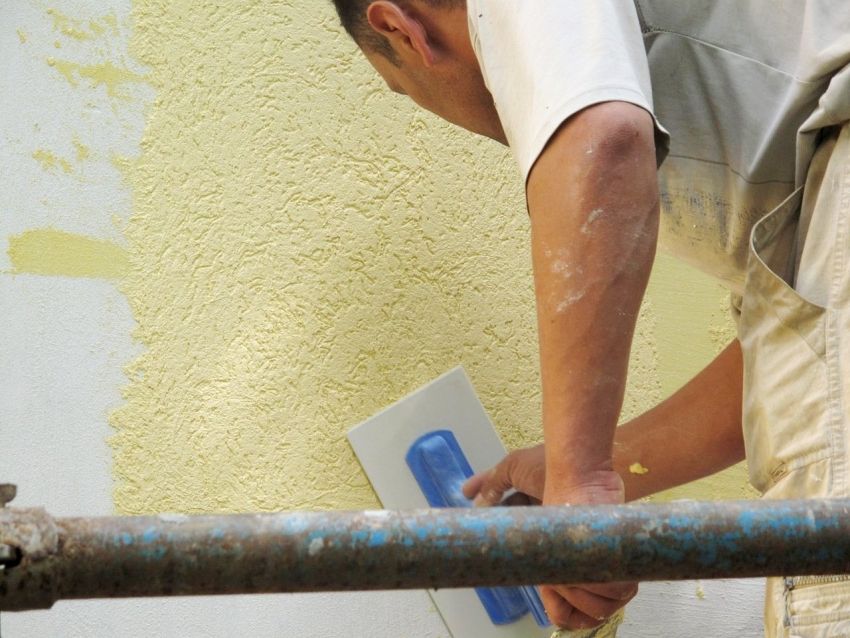 Important! Bark beetle plaster is not recommended to be applied on a wooden, metal, plastic or glass surface.

Bark beetle plaster can be made on a polymer or mineral base. Polymeric compositions can be acrylic or silicate. 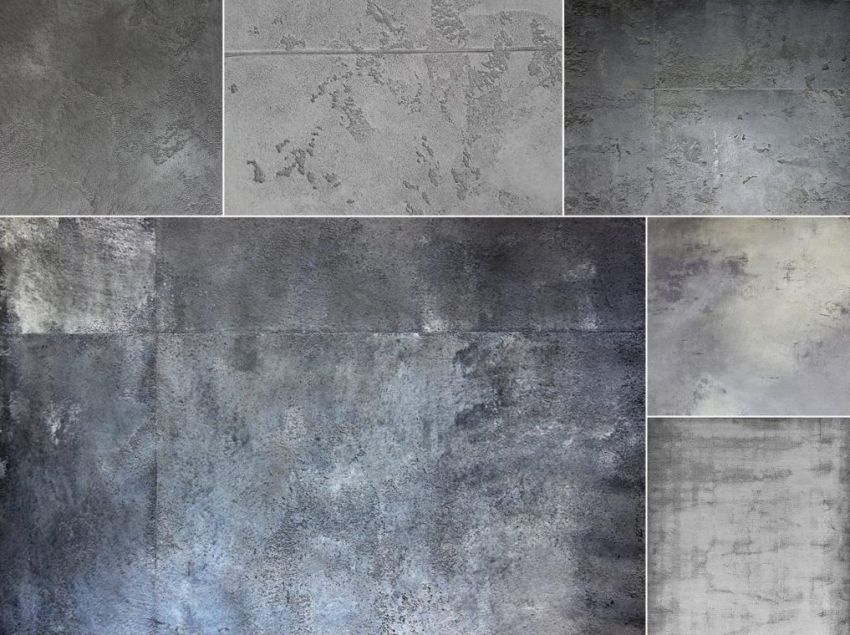 The mixture based on acrylic has good adhesion and high moisture resistance. Therefore, acrylic textured plaster, photos of successful design solutions illustrate this clearly, it is widely used for cladding rooms with high humidity: showers, bathrooms, pools. This material has good elasticity, hydrophobic and moisture-proof properties, as well as high adhesion to any bases. It is tinted in weight, which allows you to choose the most suitable color and create a spectacular and durable surface.

With the help of decorative plaster to the facade of the house, a photo of two-storey houses is a clear confirmation of this, you can give an aged look, which, undoubtedly, will highlight it to the forefront among other buildings.

The bark beetle plaster, a photo of houses and interiors with its use, demonstrates the popularity of the material, is a natural, versatile, strong and durable facing material. It is able to create reliable protection of the foundation against mechanical and natural influences, and also makes it possible to embody any design concept. 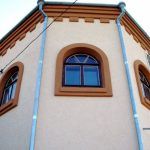 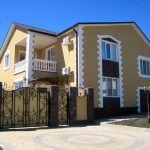 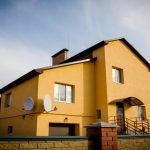 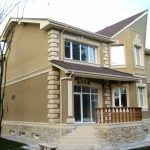 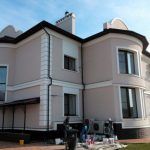 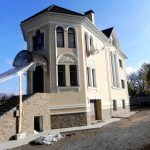 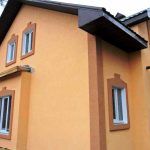 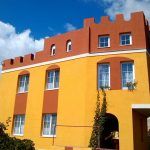 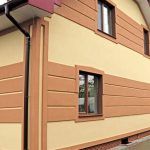 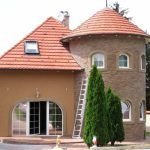 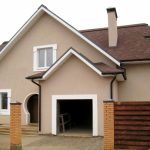 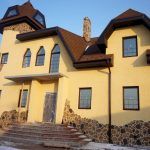 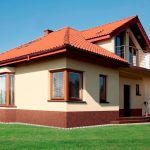 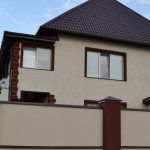 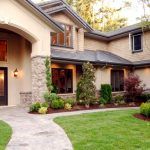 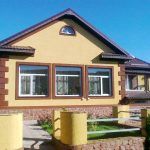 In this review, we will consider what documents are needed when selling a land

Polymer board is a very stable and durable building material. At the initial stage
A unique offer for you

How much does a cube of sand weigh: calculation of material for construction works

MDF: what is it? Features and applications of the material

Brick wall in the interior: unusual combinations and design solutions

Refrigerator rating: a review of the best models and tips for choosing

Range of channels: a parity of characteristics as guarantee of reliability

Technology of roofing of metal