To ensure the forced exhaust of air from the room, various kinds of fans are used. They are used when it is necessary to get rid of excessive moisture, an unpleasant smell, or simply to create the desired microclimate. Silent duct fans are installed directly into the duct of the duct and are effective for use in the bathroom, toilet or in the kitchen. 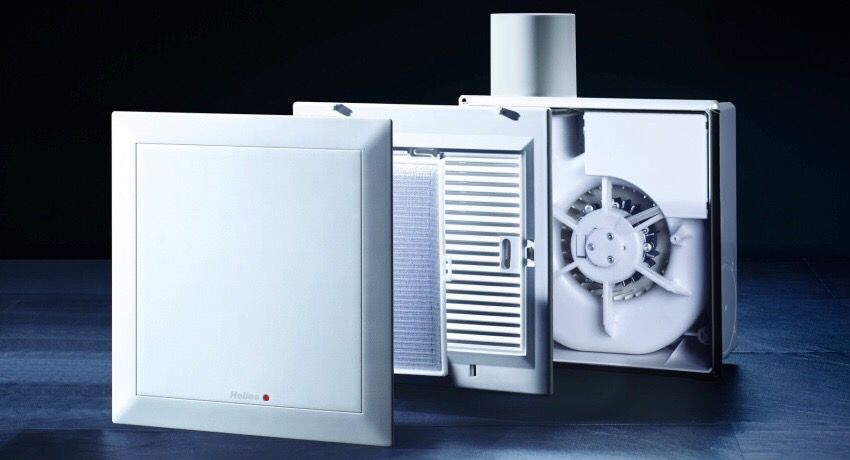 Varieties and features of duct fans for exhaust

Different device models can differ significantly from each other in a number of characteristics. For example, there may be differences in the shape of the body: 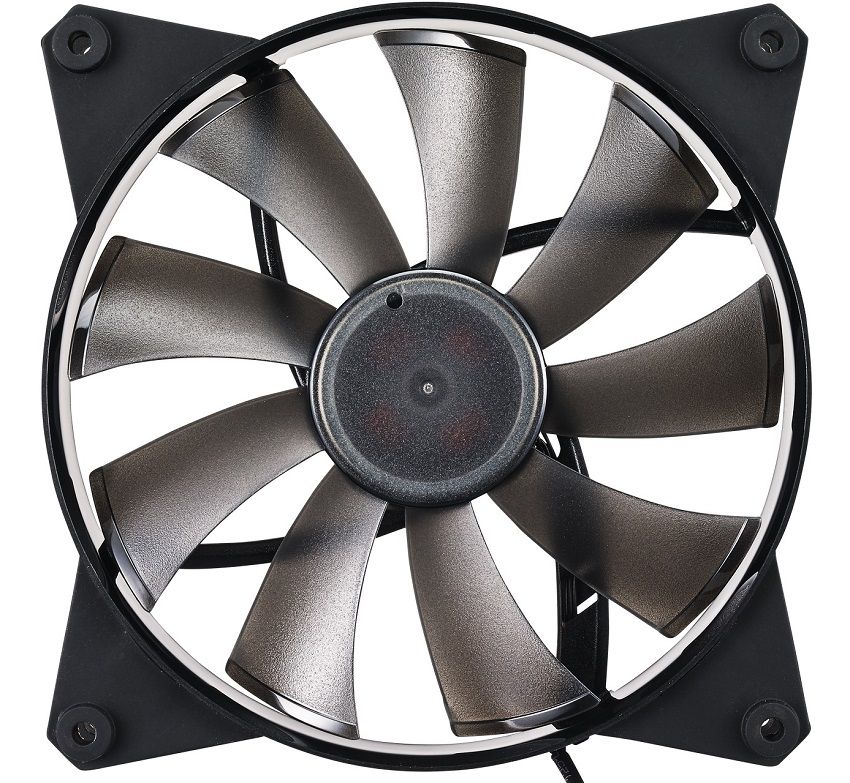 Channel devices for exhaust air are distinguished by design features.

Axial – have a cylinder-shaped housing, inside of which is a fan with blades mounted on the axis of an electric motor. Air masses with this design move along the axis of the device, and a special manifold is often installed at the inlet, which improves the aerodynamic characteristics of the device. From the advantages of axial fans for exhaust, it is possible to select a rather high efficiency – over 100 m? air per hour

In addition, axial models are characterized by ease of installation, so they are often installed in the ventilation holes in bathrooms or kitchens. The disadvantages include low pressure characteristics and high noise level – about 30-50 dB. 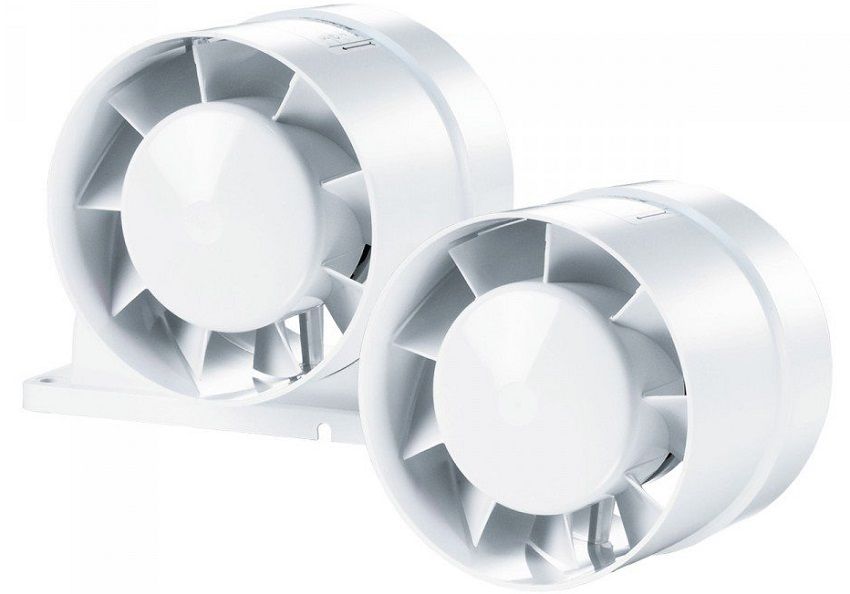 Radial – have a spiral casing, inside which is located the blade wheel. When it rotates, the air masses move in the radial direction, the air is compressed by the action of centrifugal force and leaves the body. The blades of the radial device can be directed backward or forward, in the first case, when working, the savings amount to 20% of electric power, and the noise of the device is significantly reduced. The blades bent forward increase the power of the fan. Radial models have compact dimensions, so they can be easily installed in almost any air duct.

Centrifugal – A relatively new model that has already gained great popularity among users. Centrifugal extractor fans are well suited for installation in rooms with an area of ​​more than 15 m ?, are notable for their high power and almost silent operation. The advantage of a centrifugal fan is that it can be installed not only in front of the air intake, but also in the middle of the ventilation shaft. 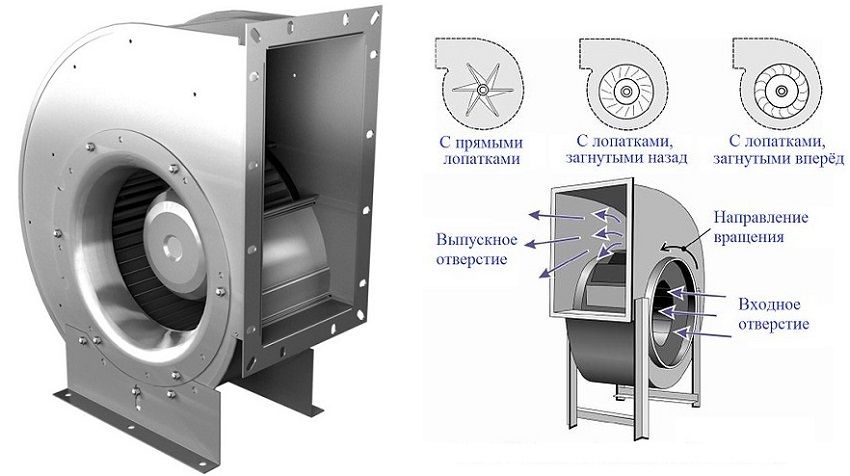 Helpful advice! If you prefer a centrifugal fan, it is better to install it directly in the ventilation shaft, so its efficiency will be much higher, and also condensate will not accumulate on the device and dust will settle.

There are also such specialized models as fans for smoke removal and protected from explosions. Axial smoke exhaust fans are designed to move air masses in which there is a certain amount of impurities. This is a good option not only for industrial premises, but also for kitchens where large volumes of food are often cooked. In addition, these models of hoods are very powerful and allow you to quickly extract steam and smoke from the room. 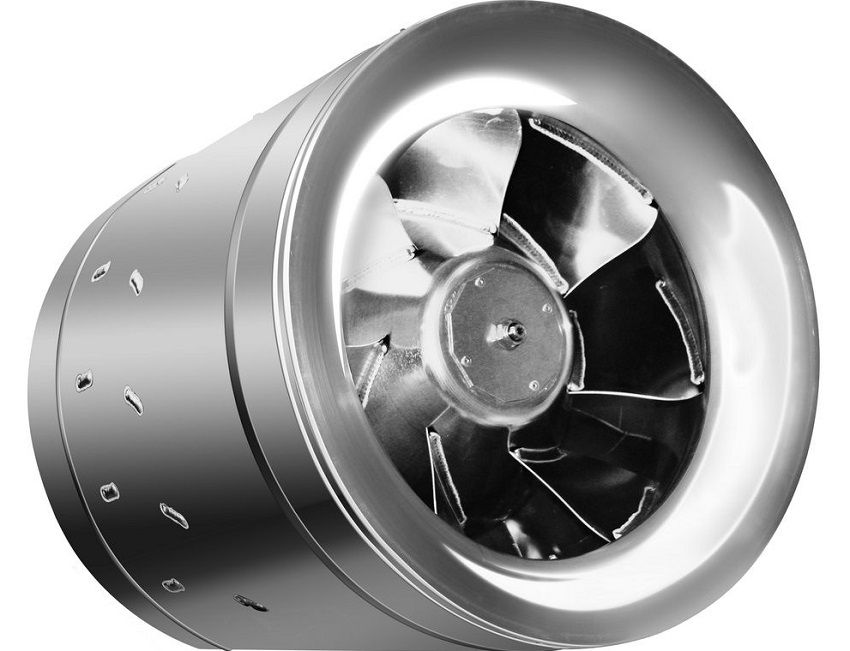 The explosion-proof axial fan is intended, first of all, to organize the forced exhaust of air with flammable or explosive impurities. Such models are rarely used in everyday life, but are very popular in enterprises where there is an increased risk of fire or work with explosive substances.

Before you buy an exhaust device that will ensure the forced movement of air masses in the bathroom, toilet or kitchen, you should pay attention to the following parameters. 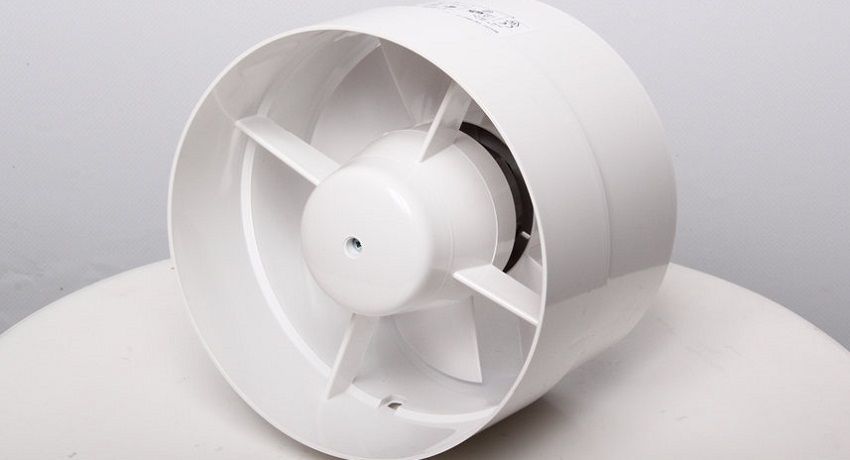 Fan performance. This parameter is calculated using a fairly simple formula. To do this, you need to multiply the volume of the room by the multiplicity of air exchange. The last figure indicates the number of air changes per hour. The multiplicity depends on the type of room and is 6 for the bathroom, which is used by up to 3 people, 8 – more than three and up to 10 – for the toilet.

At the same time choosing a silent fan for exhaust, always take the product with somewhat overestimated figures. For example, the performance of the device installed in the bathroom should be 95-100 m? / H. 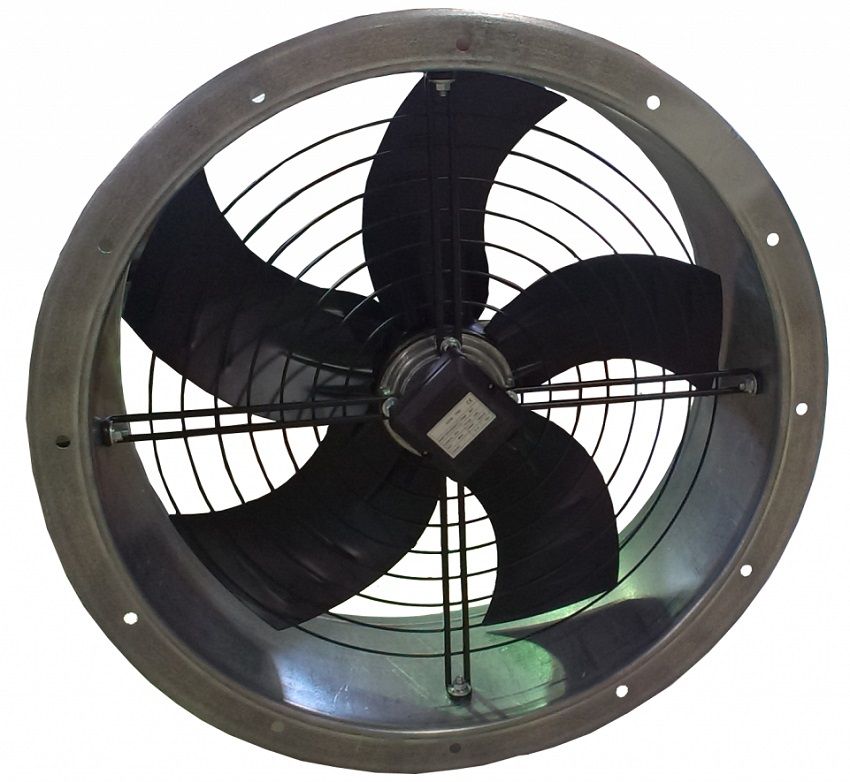 The amount of noise produced by the device during operation. Any fan always emits mechanical and aerodynamic noise. The first is the noise from the operation of the electric motor created by its vibration, which is transmitted to the duct, the second is the noise from the movement of air masses. Silent duct fans are models whose operation noise does not exceed 25 dB. An indicator exceeding the threshold of 35 dB is already noticeably annoying, so installing a device with such characteristics in a residential area is not worth it.

A silent duct fan can be made even quieter if you install a special silencer right behind the body, and also make the ventilation shaft finish a material with high sound-insulating characteristics. 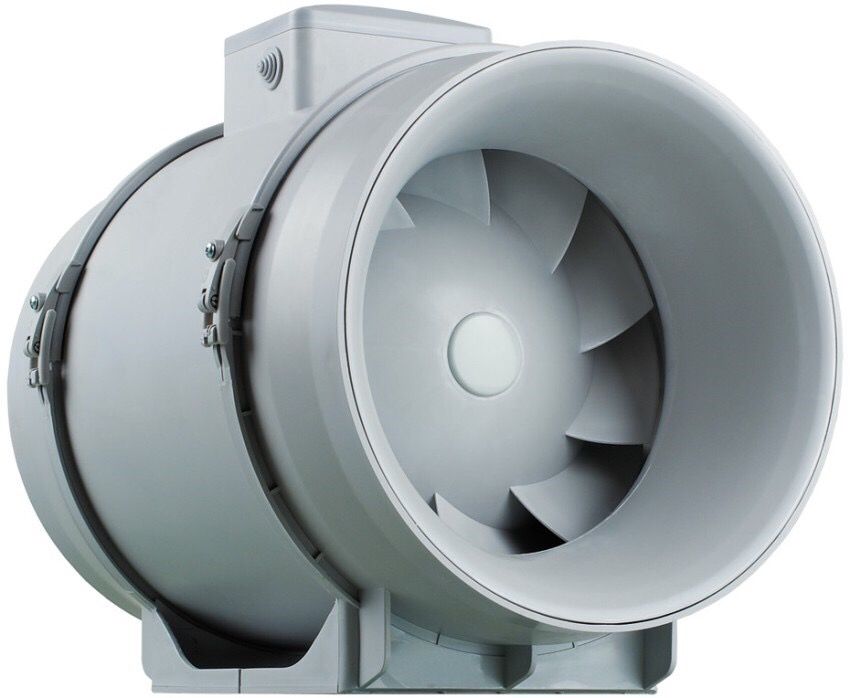 Safety construction. This refers to the level of protection against moisture and dust. This is especially true if you get a duct fan for a rectangular duct in the bathroom or in the kitchen, where inevitably formed high humidity. Moisture inside the case may cause a short circuit, so it is better to immediately purchase models with protection against water. In addition, the purchase of a device operating at a low voltage of 24 V can be an additional protection.

The functionality of the hood. This refers to the mode of operation of the fan – automatic or standard. Standard axial intake fans are turned on at the same time as turning on the light in the room and are well suited for rooms in which the humidity level is not too high. Otherwise, the device simply will not cope with the exhaust air. The automatic hood is equipped with a timer that turns the device on and off. 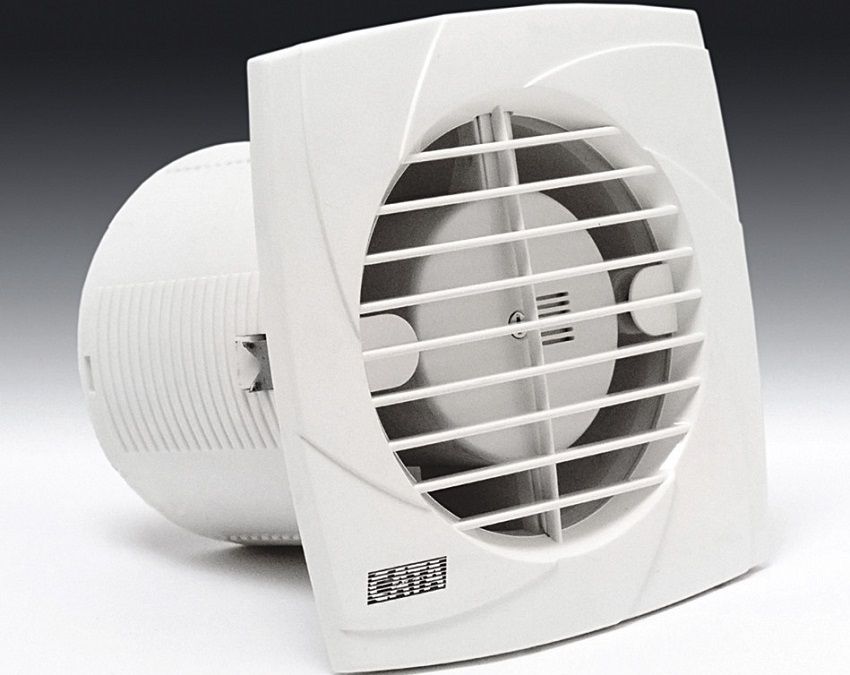 In addition, the design of the automatic fan may include a humidity sensor, which is very convenient for the bathroom. The price of an axial fan for exhaust will be higher than the standard, however, such improvements will allow you to more effectively and quickly get rid of excess humidity in the room.

The quality of the device. If you need a really high-quality fan for exhaust, then you should pay attention to the fact that it meets international standards. For example, the minimum acceptable instrument protection class is IP 34. 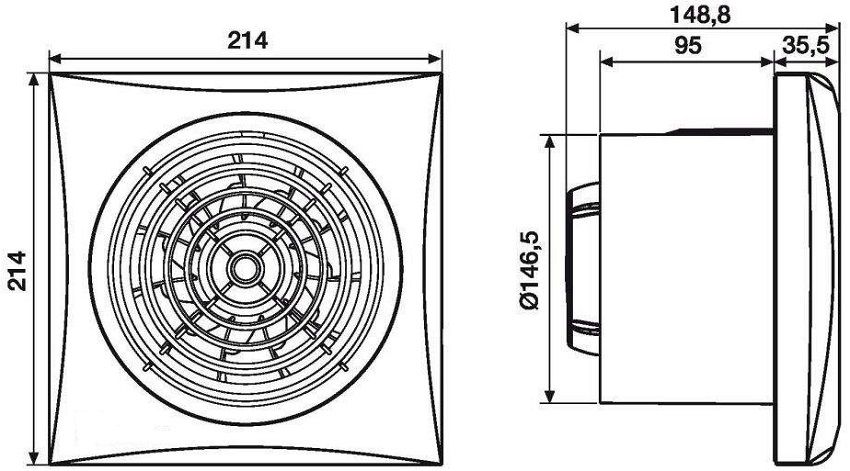 When choosing a device for exhaust, give preference to models that have already proven themselves in the market and are popular among buyers.

The appliance installed in the kitchen is somewhat different in its characteristics from the fan, which is suitable for installation in the bathroom. The main difference is that the kitchen is a source of odors. Therefore, if you do not want smells from a neighbor’s apartment to enter the kitchen, it is recommended to install a model with a check valve. This design will not allow air to enter the room when the hood is turned off. 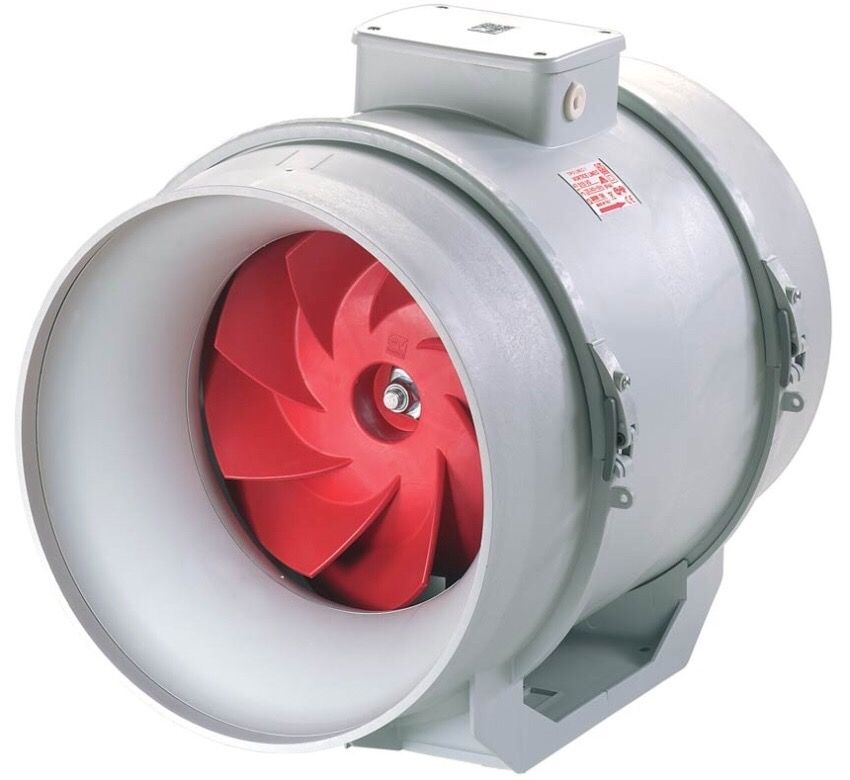 Also when buying an exhaust fan for the kitchen, pay attention to the fact that it can withstand high temperatures and high humidity. This is especially true if you are mounting the device in the immediate vicinity of the kitchen stove. The control of the kitchen hood can be carried out using a remote control, a special cord, and it is also possible to switch on simultaneously with the lighting. The most convenient way is to choose the remote option. You can also purchase a model with a built-in presence sensor that will trigger when you enter the room.

Bathroom – an integral part of the dwelling. The specificity of the room requires

Any owner wants to give the appearance of his house a presentable appearance. There
A unique offer for you

Soffit roofing: sizes, prices and a brief overview of varieties

Provence style wallpaper for an elegant and luxurious design

Is it possible to lay laminate on laminate: how to upgrade the old flooring

Which interior doors are better to choose for an apartment: criteria, nuances, tips

Decorative brick for interior decoration and its properties
//whugesto.net/afu.php?zoneid=2466924