The article will discuss the question of what is better to use as a filtering sheet, which would be needed if a drainage pipe 110 in the filter is used for arranging storm sewers: geotextiles or coconut fiber. The main types of pipes used for the organization of the drainage system, the features of their selection and use in the suburban area, as well as the prices for the purchase of consumables for construction will be considered. 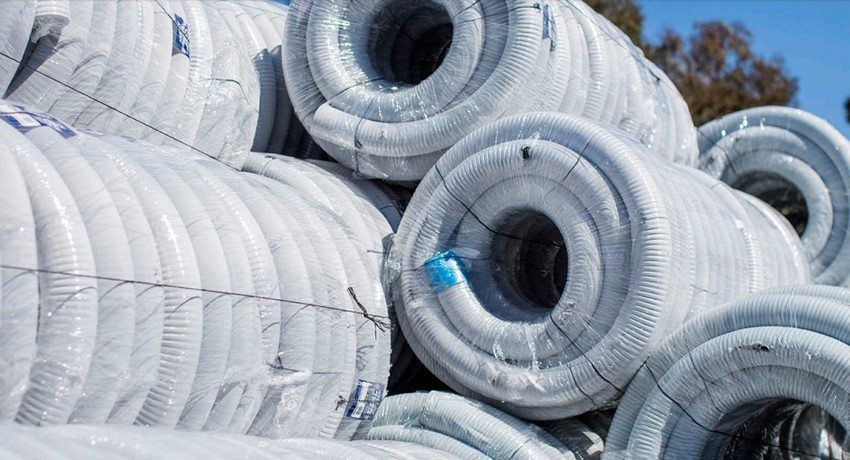 Types of drainage pipes for groundwater abstraction: price and classification

Any country plot, regardless of whether it will be used for growing vegetables or acquired for construction for a residential house, needs a drainage system. This system is an extensive pipeline laid under the surface of the ground and performing the function of output communications transporting stormwater off-site.

Elements of such output systems are primarily classified by type of material. The modern range of pipes is divided into groups, including products made on the basis of: 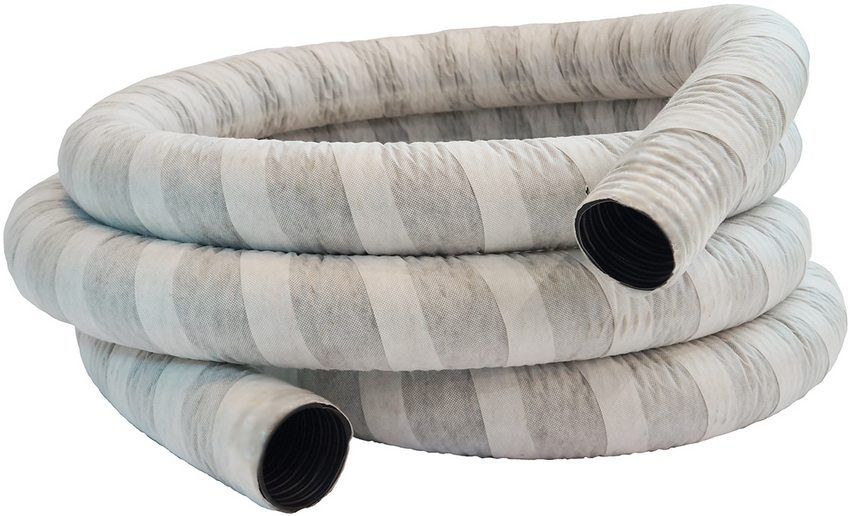 Note! The use of pipes for drainage and storm sewer is necessary if you want to preserve the fundamental part of the house. Often, stormwater floods cellars with conservation, cellars and the base of a residential building, causing the development of dampness and fungus, the formation of cracks and other damage.

The price of pipes for storm sewage depends on the material of manufacture, diameter, length and other parameters. Asbestos-cement and ceramic products today are practically not used due to the large number of disadvantages compared to their plastic counterparts.

The main drawback of asbestos-cement pipes in addition to low performance is their heavy weight. Compare the data from this table with the prices of retail drainage pipes of 110 mm or more of plastic, to feel the difference between these materials.

Drain pipe 110 in the filter: geotextiles and coconut fiber

Despite the extensive choice of sizes, it is the drainage pipes 110 that are used in the filter most often when laying down the drainage and drainage system. Filter material increases the efficiency of the entire system.

The use of drainage pipes 110 with a geotextile filter or other filter media allows large debris, grains of sand and small particles of dirt to be trapped. By purchasing such products to organize the drainage system, you will significantly reduce the rate of internal silting and increase the service life of the pipeline.

For wrapping pipes, special webs are usually used, which are non-woven material with hygroscopic properties. Canvases are divided into groups according to the type of material, which can be natural or artificial.

Note! The effectiveness of the filter is based on its capacity, calculated in microns. For this indicator, you can calculate the size of the particles that the filter is able to delay: 1 micron = 0.0001 cm. The highest throughput of a straw filter is 12,000 microns, polyester has the lowest throughput – 180-240 microns. 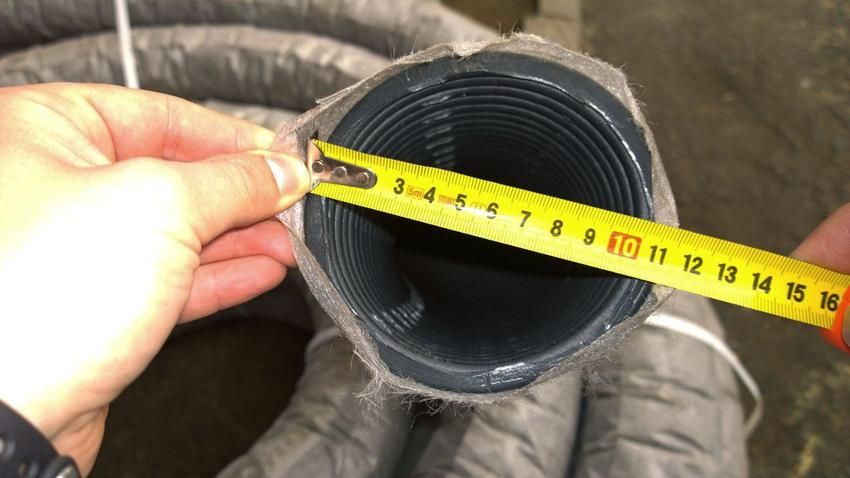 The most popular among consumers are drainage pipes in geotextiles and coconut fiber. At the same time, geotextiles as a filtering material have a throughput in the range of 450-700 microns. Most often it is used on clay and sandy soils. Due to its excellent performance properties, this type of coating on pipes does not decompose.

Concrete and plastic drainage well for storm sewer. Types and features of designs. Rules for the construction of wells and a detailed description of this process. Calculation of storm sewer.

Products wrapped with coconut fiber have an inherent throughput factor of 700 microns. Such a pipeline is usually laid in sandy, agricultural types of soil, as well as peat. In contrast to the previous version, the material is decomposable.

Coconut fiber and geotextiles: prices of drainage pipes in a 110 mm filter

Geotextile is a non-woven, and in rare cases, woven fabric made on the basis of polyester or polypropylene yarn. There are variants of products where both types of these threads are used. 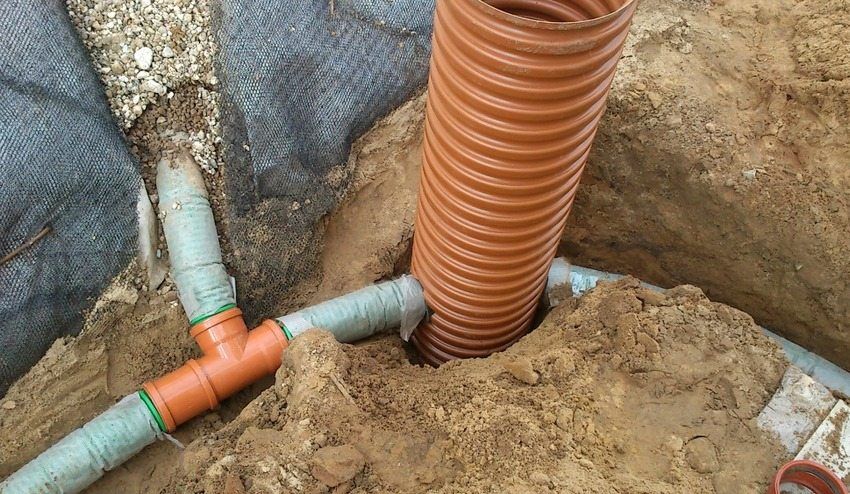 Geotextiles are widely used in medicine and home furniture, but this type of material found the most extensive use in construction. Many drainage pipe manufacturers have already appreciated the benefits of geotextiles, so most of them are gradually refusing to use coconut fiber and other filters.

Helpful advice! The low cost of a drainage pipe 110 per meter running is one of the significant advantages of products wrapped with geotextiles. Use this advantageous property to save the cost of building a drainage system.

According to this table, the cost of drainage pipes 110 mm in geotextiles is three times less than similar products in coconut fiber. The same trend is observed with respect to pipes with a different diameter size when comparing these filter materials.

The price of a drainage pipe 110 mm in a geotextile filter is not the only advantage of the products. This version of the material has other advantages: 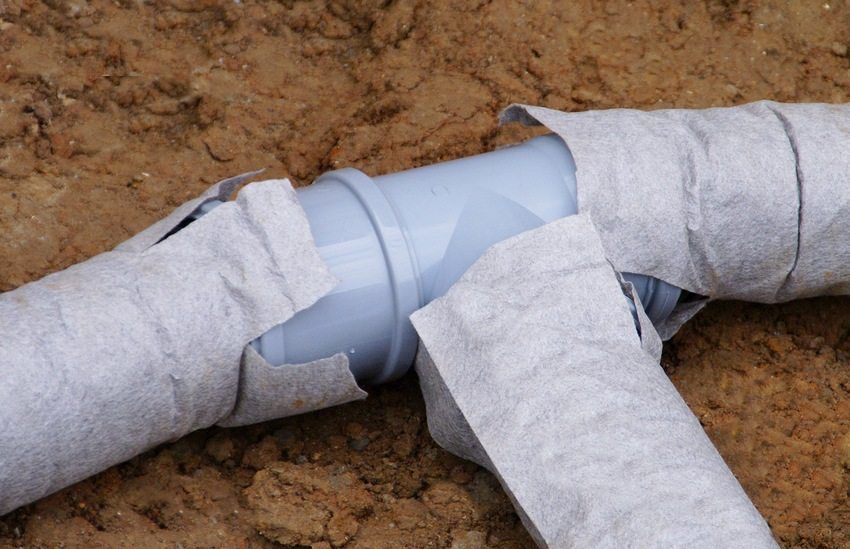 Note! If you decide to buy drainage pipes for groundwater drainage with a geotextile filter, in the absence of significant loads, this material can last for almost as long as the entire installed system.

Geotextile is perfectly combined with any types of drainage pipes. But complete with polymer products, it can bring the maximum number of advantages. 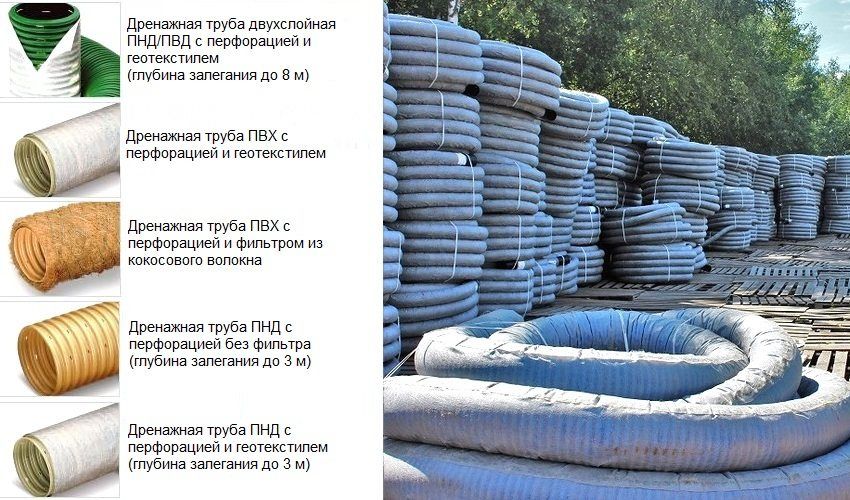 Polymer communications can be made from various raw materials:

Smooth, perforated and corrugated pipes are also on sale. In this case, depending on the constructional features, two-layer and single-layer drainage pipes are distinguished.

Prices for double-layer products with perforation:

Features of drainage corrugated pipes in the filter 110 mm geotextiles

Corrugated products have an uneven ribbed surface. Such pipes are issued with the special openings which are carrying out function of the filter. They are great for organizing drainage systems and storm sewers located under the surface of the soil.

Helpful advice! Use the properties of corrugated products to form a pipeline of complex shape with turns. Due to the flexible structure, these pipes make it possible to refuse the use of fittings during installation of the system. In addition, they provide high-quality and easy connection to the wells. 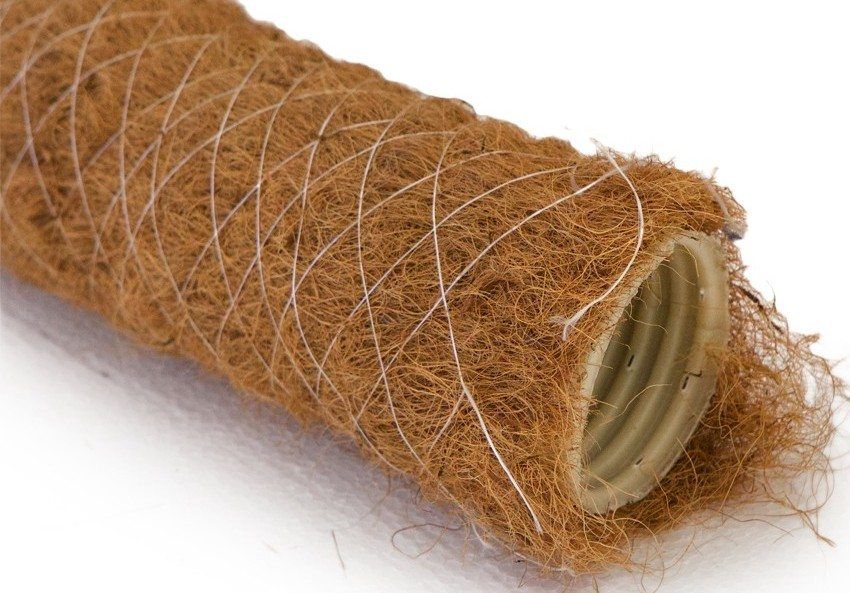 Most corrugated products are made using polyvinyl chloride or low pressure polyethylene. They have a special label that allows you to quickly navigate the range.

For example, the marking on the drainage pipe in the filter “DGT PND d110” means the following:

If you intend to buy a drainage pipe for your construction, the corrugated products can be either with or without a filter. In the first case, the average cost of the product is 71 rubles / rm, in the second – 67 rubles / rm.

Compliance with all the rules of technology laying the pipeline involves the correct choice of materials. If you make a mistake at the initial stage, the work will have to be redone. 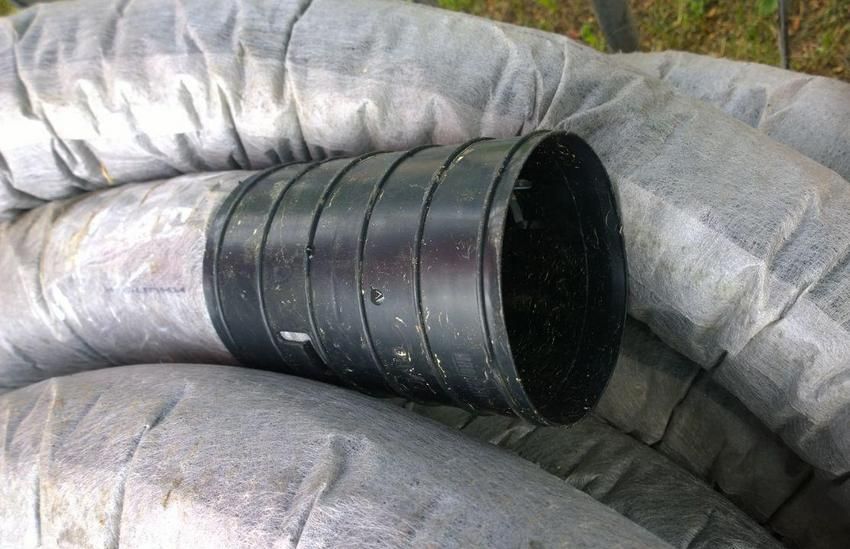 Before you buy a pipe for a drainage ditch and other elements of the system, you should make preliminary calculations. An important role is played by the indicator of stiffness and flexibility. Experts recommend purchasing rigid pipes for the organization of surface pipelines, while for installation of a recessed system it is better to take flexible versions of products.

Pipes that have a non-flexible structure are characterized by a high index of ring stiffness. It indicates the degree of deformation of the product, which may occur in the event of a strong mechanical impact.

Note! Inflexible pipes have dimensions within 6-12 m. While flexible versions of products can be about 40-50 m long.

Inflexible pipes retain their strengths even when the soil is displaced. The disadvantages of such structures are the costs associated with the need to purchase additional hub parts for the organization of turns of the pipeline. These include tees for 110 mm drainage pipe, bends, couplings. Manufacturers offer key parts that fit the basic diameters of products: 110, 160, 200, 250 and 315 mm.

In the process of transporting pipes should be careful, as well as during their installation. If for some reason the material receives even a single damage, in the future this section of the pipe will be constantly clogged, and the drainage procedure will be disturbed and become uneven. 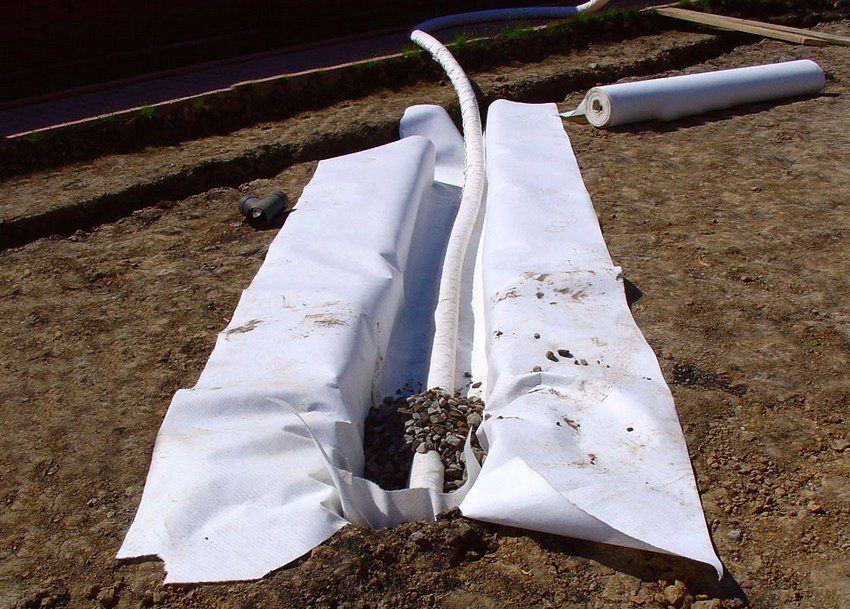 Many manufacturers produce pipes with a sheath in the form of geotextiles. This greatly facilitates the installation process. The technology of installation of the system also assumes an independent wrapping of products with cloth, which can be bought separately.

Not all types of geotextiles that are commercially available can pass water, so not every type of material is suitable for laying drainage pipes with your own hands. A suitable option is polypropylene sheets, obtained by needle-punching method and consisting exclusively of monofilaments. 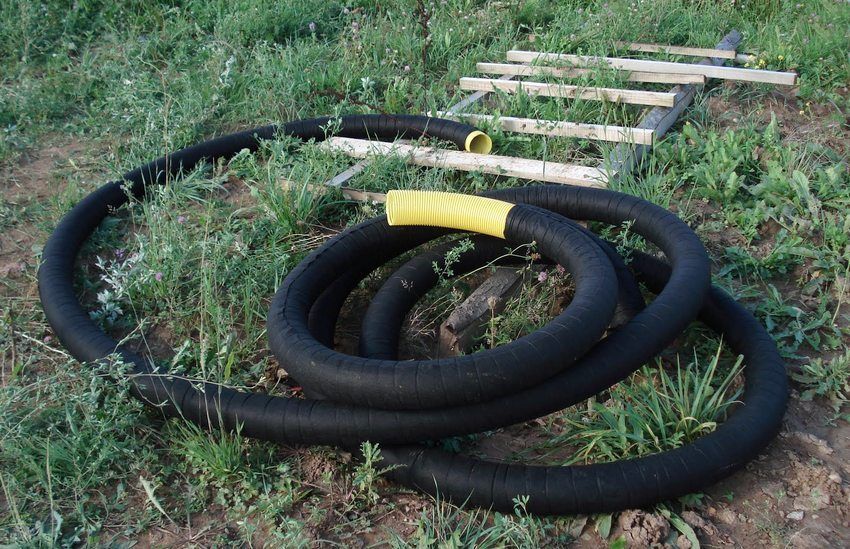 When the canvas is wrapped, its edges are fixed due to the back filling of the ditch with sand or soil. The rest of the technology of working with the canvas does not differ from the usual installation of a storm system with already wrapped pipes.

The choice of the construction of the greenhouse, which is planned to be installed
A unique offer for you

Air ionizer: everything about work and features of use of the device
“Norms and rules for the construction of a private house on the site: requirements of SNIP”

Step by step making the warm beds do it yourself in the spring: popular technologies

Humidifier for children: which one is better to buy a humidifier in the nursery

Design of the hall in the apartment: photos of stylish interior solutions

Oven from the barrel: a simple variant of the organization of heating in the outbuildings