When planning the construction, you need to take into account many different factors, including how convenient the structure will be to operate. This rule applies to the construction of not only residential buildings, but also a bath. And since a place to rest in any case is required, we will consider projects for a bathhouse with an arbor under one roof. This article contains information on how convenient and profitable this option is, as well as several projects as examples. 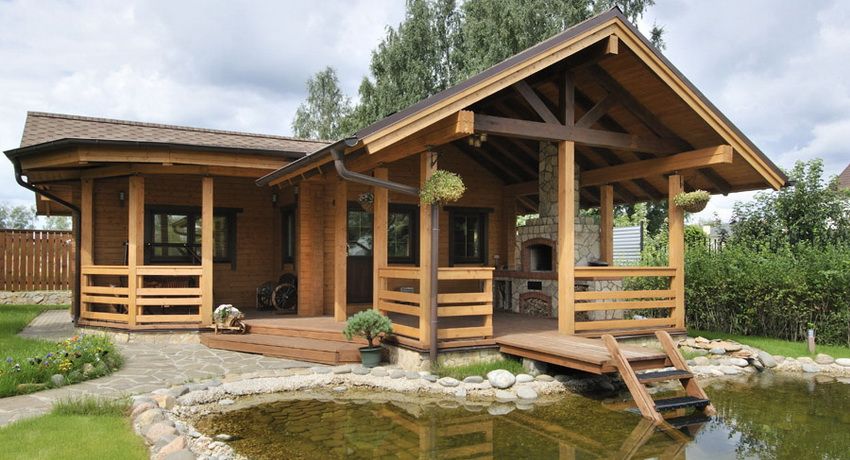 Bathhouse with arbor: what is it? What features does this structure have?

From the point of view of architects, a bathhouse with a gazebo under one roof is a combination of two separate objects, which differ not only in their purpose, but also in the capital structure of the building. Since the gazebo is a predominantly lightweight construction, in which vertical supports perform the supporting function.

Usually the arbor is built in the shape of a rectangle or hexagon. A bit less common is a round arbor. The size of the gazebo can be any, and the walls can be left completely open or partially covered with decorative grilles.

When it comes to a gazebo combined with a bath, then such a formulation can not be called true. It will be more accurate to talk about the terrace or the veranda, however, attention is rarely paid to this, so on the Internet you can find a large number of photo baths with gazebos, as well as instructions and recommendations for construction.

An extension to the bathhouse in the form of a gazebo was not at all accidental. This solution has a lot of advantages that attract owners who want to start building on their site. Consider the advantages of the implementation of such a project: 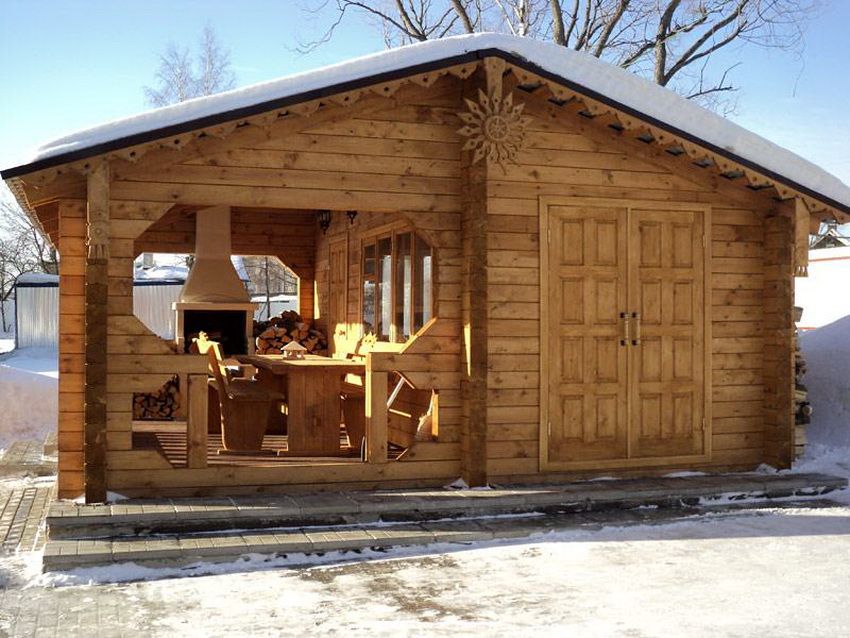 All these advantages should be added by the fact that combining two objects saves time and effort. After all the necessary work in one period of time it is easy to see the advantages of this method of construction.

The traditional material, ideal for the construction of baths, and for the arrangement of the arbor, is natural wood. This material is quite affordable, easy to handle and relatively inexpensive compared to others. 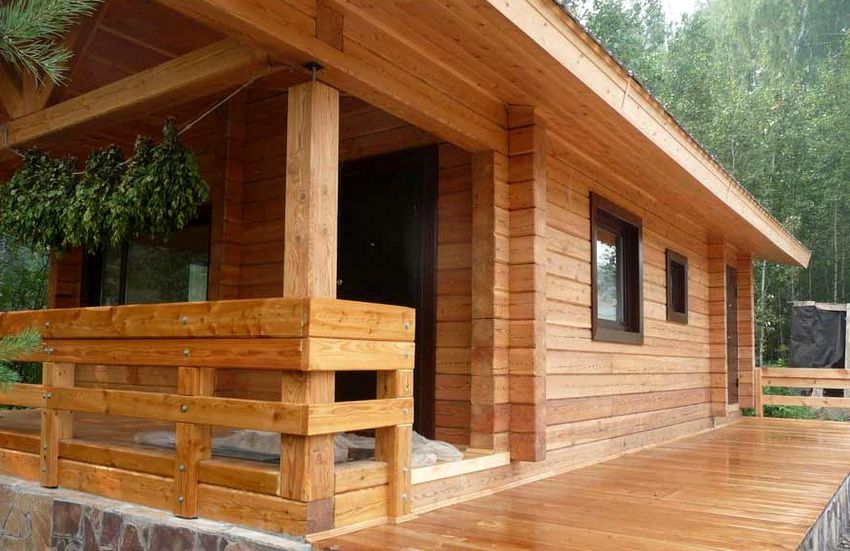 Initially, for the construction of the bath often used whole log. Subsequently, other wood derivatives appeared on the market, which were used in construction. With their help, it became possible to significantly reduce the budget for construction without loss of quality. Consider some of the most common ones:

For the construction of baths use not only wood and its derivatives. Today, foam blocks and bricks are increasingly used for this purpose. These materials differ in cost and installation method, so that each owner can choose the right one for himself, focusing on his own capabilities and desires. 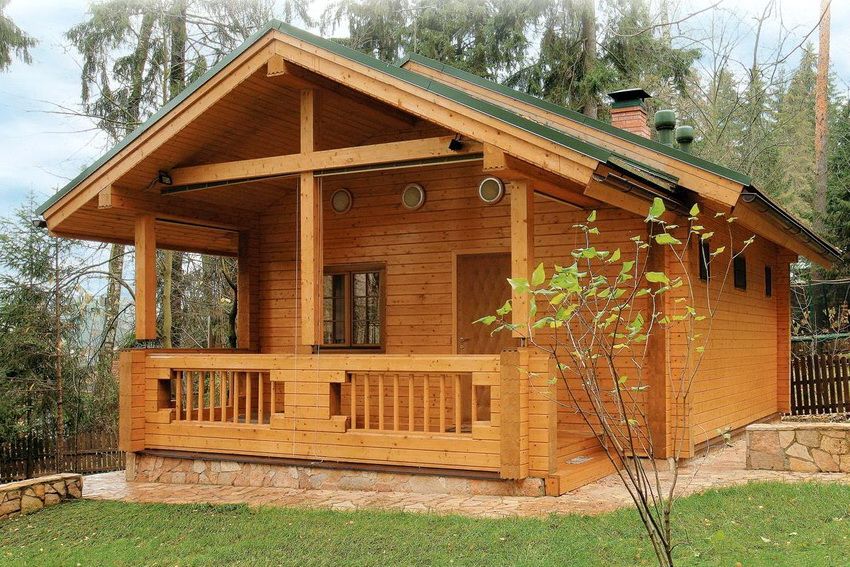 Arbor, attached to the bath, can greatly change the appearance of the building. In addition, it will affect the functionality of the room. Therefore, before starting construction, it is worth considering a few of the most popular options, each of which has its own advantages.

The covered passage between the bath and the gazebo is especially relevant when the bath is already built and it became necessary to attach a gazebo to it. Such a solution will allow combining both structures without disturbing the integrity of the bath structure. In order for the construction as a whole to last longer, a covered walkway is built on a shallow-reinforced reinforced foundation.

The complexity of such a project is that it is necessary to equip a multi-level roof. Therefore, special attention will need to be paid to the quality of arrangement of the truss system. Otherwise, there may be a problem with the leakage of the roof. 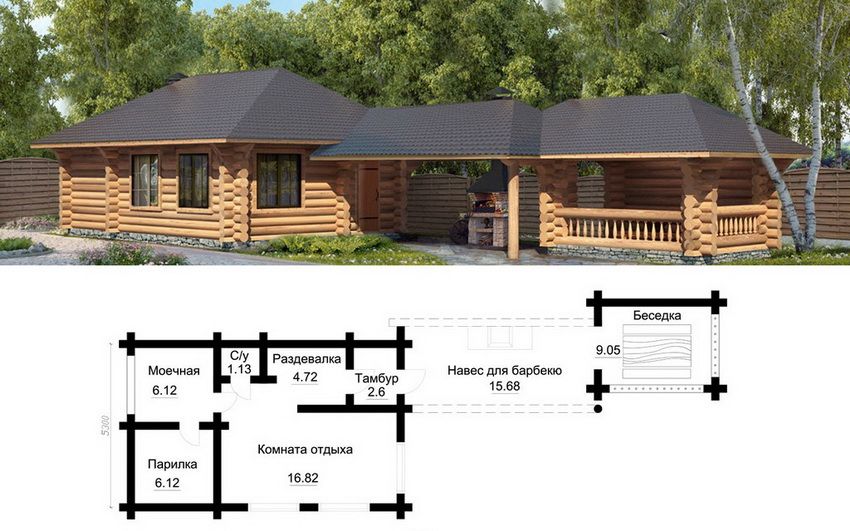 Otherwise, this project deserves attention, since the sauna, connected to the gazebo by a covered walkway, is a beautiful and functional option that provides the owners with a sufficiently large amount of free space.

This option most of all others confirms the fact that speaking of the gazebo, in fact, imply a veranda. Despite the apparent complexity, to implement this project is quite simple. As a support for the roof of such a structure, use the arbor frame. Thus, the building looks like a single composition.

Note! Extremely impressive in this case will look decorative wooden lattice, decorated with carvings. They are light, perfectly transmit the light and create comfort inside the gazebo.

Compared with the previous project, this option has certain advantages. Thus, the consumption of building materials is significantly reduced due to the absence of a separate transition from one part to another.

Due to the fact that the construction of this type of building does not provide for complex shapes, it is advisable to use rounded logs for construction. Working with such material is easy, so you can create a functional and beautiful building in a short time. To hold the roof above the gazebo use a separate vertical rack.

Also, this is ideal if the owners want to have a bath with a gazebo and barbecue, as it is quite simple to install everything you need for cooking in the summer.

Interesting! In the warm season, a gazebo-extension to the bath can serve as a summer kitchen. For this purpose, it is possible to install a stone oven.

For those who do not want to spend time and effort to implement complex and intricate projects, there is more than a simple option. The roof in this case is single-pitch, which greatly simplifies the erection procedure and saves money. Even under the condition that the size of the building will not exceed 2.6 x 2.0 m, this will allow you to place everything you need, including a barbecue or barbecue. 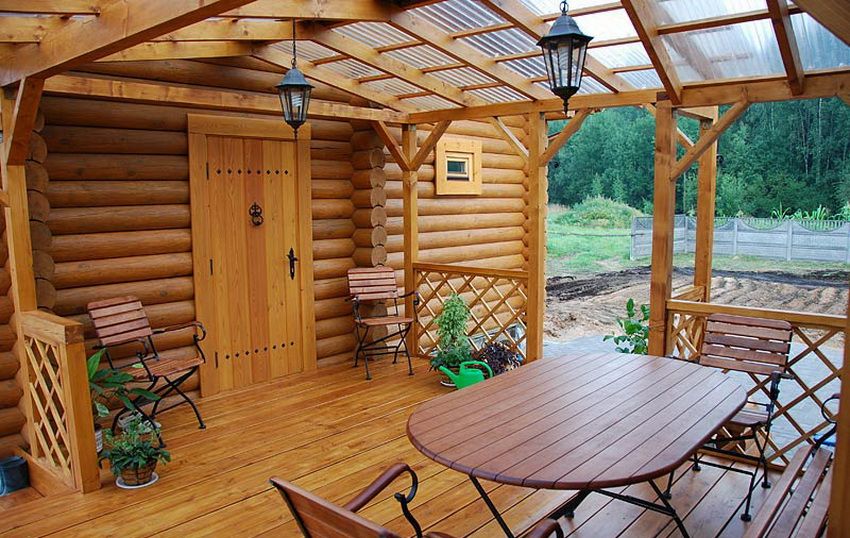 Looking through the photo bath with a gazebo under the common roof, you can make sure that the options are not so little, and there is plenty to choose from for the most demanding site owners. Taking into account how much money is required for construction, as well as which of the projects will look better on the existing territory, it will be easy to choose the best option.

First of all, it is worth paying attention to the features of the most popular project – a bathhouse with a gazebo under an elongated gable roof. Arbor in this embodiment is based on the walls of the building and vertical supports. In this case, experts recommend paying special attention to the process of building the foundation, since it is best to use bases of different types.

Usually, a reinforced strip foundation is laid directly under the building, which copes with serious loads perfectly. But under the gazebo is best to make the column. However, they will not be interconnected and each of them will function on its own.

You should also pay attention to the fact that the gable roof in this case will have quite large sizes. Its length just above the gazebo will be about 4 m. And this is a serious load on the supports and, consequently, the risk of displacement of the truss system. It is important to understand that even minor, at first glance, distortions (3-4 cm) can have a serious impact on the state of the structure. Therefore, even at the stage of laying the foundation is to try to eliminate such risks. 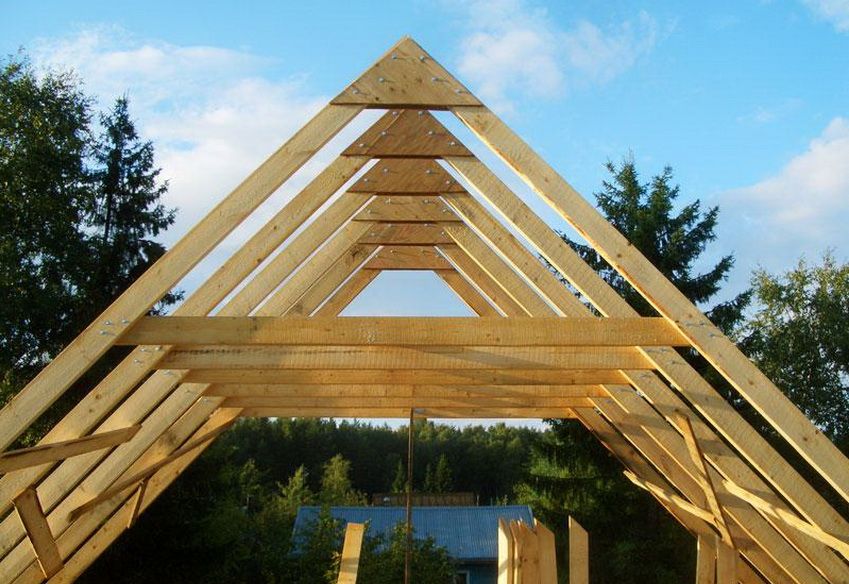 Helpful advice! And the belt and column foundation will be more reliable if you lay it below the level of soil freezing in winter. At the same time, bored piles are recommended for the column basement.

Despite all the recommendations, some owners still prefer shallow foundations. In this case, it is important to strictly adhere to all building codes:

You should not forget that for the column foundation, the presence of anchors is mandatory, which will allow fixing vertical posts, the width of which will be at least 40×40 cm. 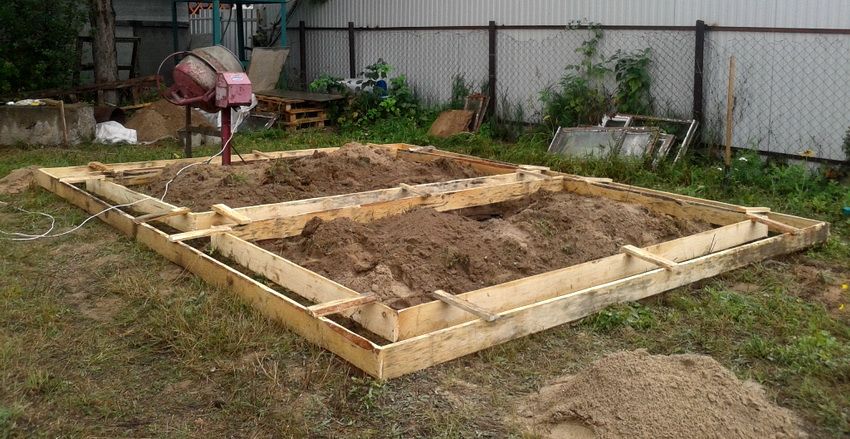 In addition, it is important to understand that virtually any material undergoes shrinkage and wood is no exception. In some cases, this figure reaches 0.7 cm per 1 m height. But the racks that hold the roof over the gazebo, will not sit down. Therefore, it is best to give time for shrinkage throughout the building. As a rule, this period is one year, but it is better to take more time to avoid further trouble.

The first step towards creating a truss system is the selection and purchase of all the necessary materials. This will require a 150×150 mm timber, as well as 50×100 and 50×150 mm boards, from which rafters and other elements will be made.

If construction of such complexity is made for the first time, it is best to give preference to a simple scheme in which crossbars and tightenings are provided. And in order to increase the strength of the structure, it is advisable to pay attention also to the struts, the headstock and the ridge bar. It is believed that the presence of all these elements is not necessary, but in fact they take on some of the load, thus avoiding deformation of the entire truss system.

Looking through the photo extensions to the bath in the form of gazebos, you can see that for many it is another field of activity where everyone is able to realize their own ideas and fantasies. The main thing is to find a balance between beauty and functionality, paying due attention to all aspects of construction: aesthetics, practicality and reliability. Otherwise, this option is fully justified, since it allows you to simultaneously solve several problems, while spending less money and time on it.

In addition to the main repairs, such as wall and ceiling finishing, we have

This article discusses in detail such a popular type of finish, as ceramic tiles
A unique offer for you

Wallpaper under the tree: features of finishing material and its application
Types of porcelain stoneware

Stairs to the second floor on a metal frame: beauty, elegance, ease of installation

The diameters of steel pipes: how to properly plan communications

Video: putty walls under the wallpaper with their own hands. Putty or putty, how to?

Building a house from scratch: where to start and how to build it yourself, step by step instructions

Solar panels for the home: the cost of the kit and the feasibility of installation