When designing a sewage system for a private house, not everyone knows how to do it correctly. Indeed, for its perfect functioning, it is necessary to take into account many factors and to know about some nuances. We will try to understand them in order to build sewage systems in our country house at a professional level. 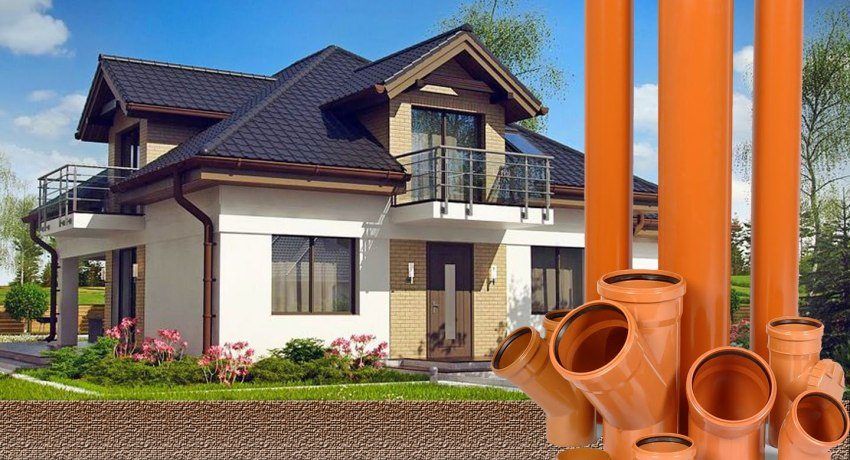 The current boom in the construction of private housing has necessitated the development of modern autonomous sewage systems. Their distinctive property is considered to be the ability to ensure the outflow and processing of a large amount of domestic wastewater.

This is due to the expansion of the line of household plumbing devices that require water to function. These include: shower devices, washing machines and dishwashers, a jacuzzi, car wash devices and other similar devices. In connection with their use, the water consumption rates per person were increased to 200 l / day. 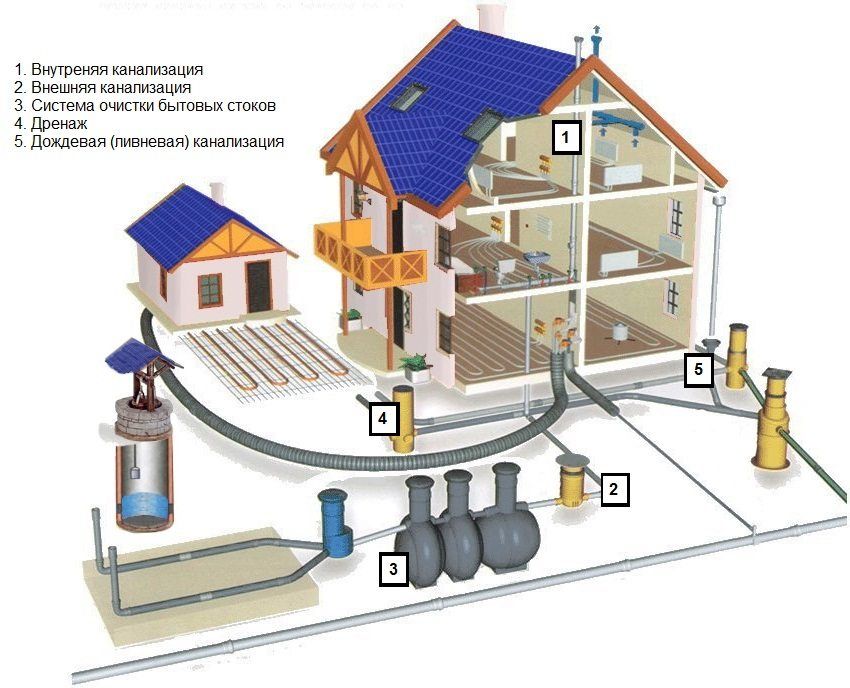 In addition, this number of sources of wastewater makes it difficult to complicate the sewer network. However, with the advent of PVC pipes for sewage, the dimensions of the structures were able to be kept within reasonable limits. The same circumstance allowed to significantly increase the degree of ease of installation and dismantling of sewage systems. After all, all components of PVC reinforcement have a dense, but easily assembled connection system.

Thus, the modern sewage system is a complex of intra-house distribution of sewage pipes that have a certain degree of slope in the direction of the drain. On leaving the house, the drain pipe enters the external tank, in which accumulation occurs, or the cleaning or recycling of domestic waste water in various ways. All sanitary appliances are equipped with siphons, which ensure the absence of odor in the room. 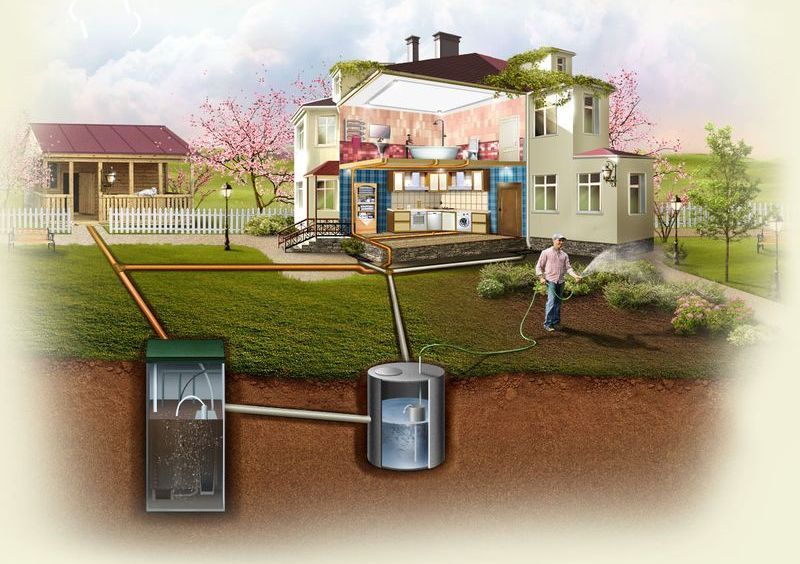 For example, take a two-story cottage with two bathrooms and a kitchen. On the second floor there is a toilet, and on the first floor there is a kitchen, a bathroom and another toilet. If the bathrooms are located approximately in the same vertical plane, then you will need one riser, and if in different, then two risers.

Vertical sewer risers are the largest pipe diameter, standing vertically. They connect the roof and basement. The drains from all plumbing fixtures converge in them. The risers at their lower points are connected to a horizontal pipe that slopes and extends outside the house. It leads to an external sewer.

When moving through a pipe, the water that fills its entire section creates the effect of a piston. This happens, for example, when draining water from a toilet bowl. Behind this piston, an area of ​​too low pressure is created, due to which all the water can simply be sucked out of the siphons of all plumbing fixtures. This causes the formation of an unpleasant odor in the rooms.

A high pressure is created in front of the piston, which is able to push water out of the siphons in front of it. To prevent this from happening, a ventilation device is required that will effectively equalize the pressure in the system during an explosive discharge of water. That is why the upper part of the risers is displayed in the attic and does not close.

In addition to the drain from the toilet, a similar effect of the piston is created when draining from the bath or washing machine, in which additional pressure is created by the pump. The same can be observed in the presence of long connections from plumbing fixtures to the riser and with an excessively large difference in the levels of the beginning and end of the supply pipe. 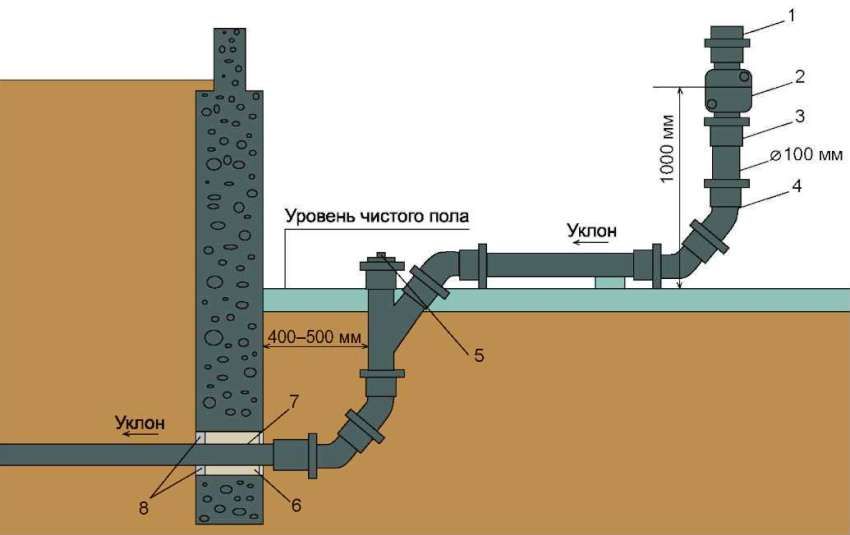 Helpful advice! When constructing a sewage system for a private house, not everyone knows how to properly position the toilet. Meanwhile, it must be connected to the riser separately from other devices. They, if possible, should be above this most “dangerous” device.

There are several basic rules for the construction of an internal sewer system, the violation of which is fraught with an imbalance in the work of the entire sewage system: 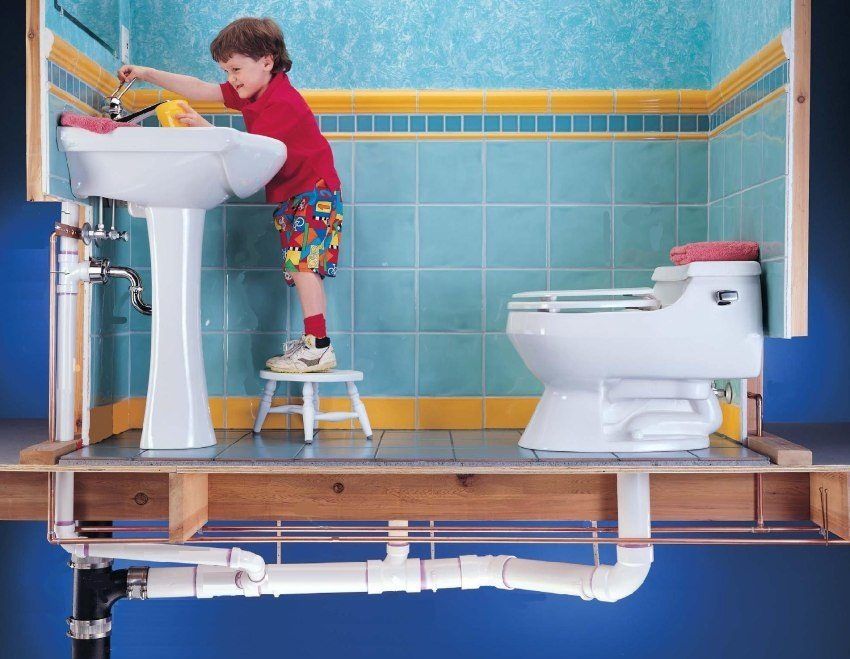 Helpful advice! There is a way not to increase the diameter of the pipe with a large length of the liner. To do this, it is necessary to equip its upper end with a vacuum valve, which will create aeration. The second option is to connect the rear end of the liner with the ventilation pipe from the riser. In the same way, you can extend the liner to the toilet if necessary. 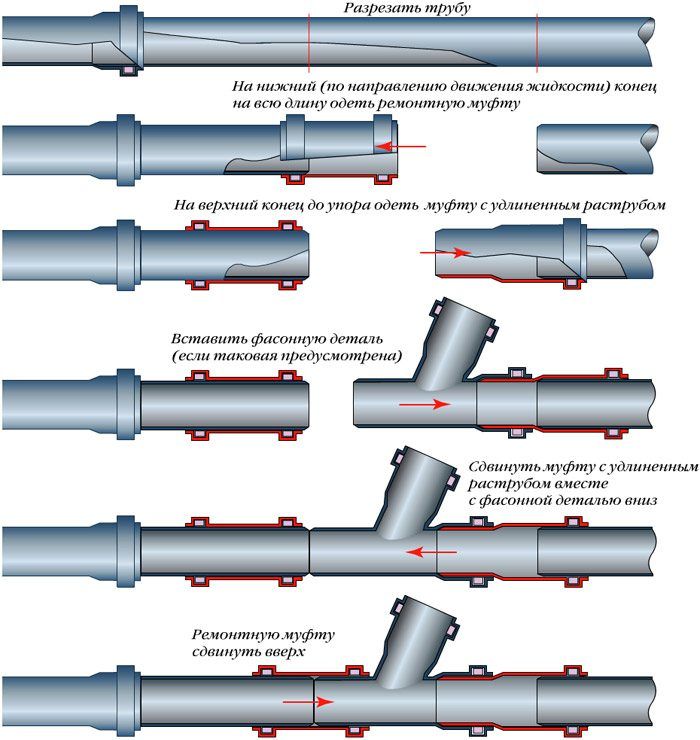 In addition to the above basic rules, when installing sewage, you need to take into account the equally important nuances:

Helpful advice! To prevent sewage from entering the house when the septic tank overflows, a check valve is mounted inside the outlet pipe. It still prevents penetration into the house of rodents.

Each sanitary device in the house is connected to the liner not directly, but through a U-shaped small knee, which is called a siphon. At the bottom of it, at any moment in time, there is a liquid that creates a hydro-barrier for gases generated in sewage. Thanks to him, the smell does not penetrate the room.

If inside the house there is an unpleasant sewage odor from a plumbing fixture, this may mean the following:

In order to prevent this, the ventilation is made of PVC pipes for sewage, the dimensions of which must be at least 100 – 110 mm. Its upper end should be above the roof.

Observing the proposed rules, you can independently assemble the internal sewage system of the house, which will function without serious problems.

Today, the most acceptable for the cost of construction, is a septic tank of

Stretch ceiling in the bathroom, photos of ready-made design solutions

Irrigation system in the country: a variety of options for irrigating plants

Power supply for LED strip 12V: the choice of the optimal device

Ceiling LED lamps for the home: the essence of harmonious lighting

Thermostat in the outlet for household heaters: how to choose the best

Soffit roofing: sizes, prices and a brief overview of varieties

Landscape design of the dacha plot: photos and recommendations for creating pictorial projects