During excavation, freshly dug mounds, pits and slopes fall off, especially after heavy rains. The geogrid for strengthening the slopes is one of the best solutions when you need to quickly and effectively eliminate this problem. Cell structures, geosynthetics, and reinforced ground plates solve the problem in different ways. Consider the possibilities of geogrids in detail, comparing with analogues. 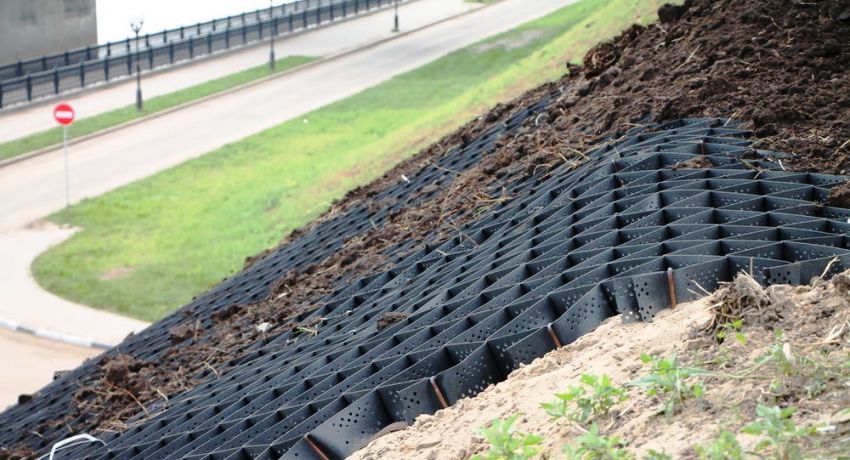 The main characteristics of the polymer geogrid

For those who have no idea how a geogrid looks like a geotextile, a quick glance is enough to understand the simplicity and practicality of this invention. It can be described as the simplest cell base consisting of fairly strong polymer filaments. Another option is a geotextile or a mesh of ribbon-like fibers. 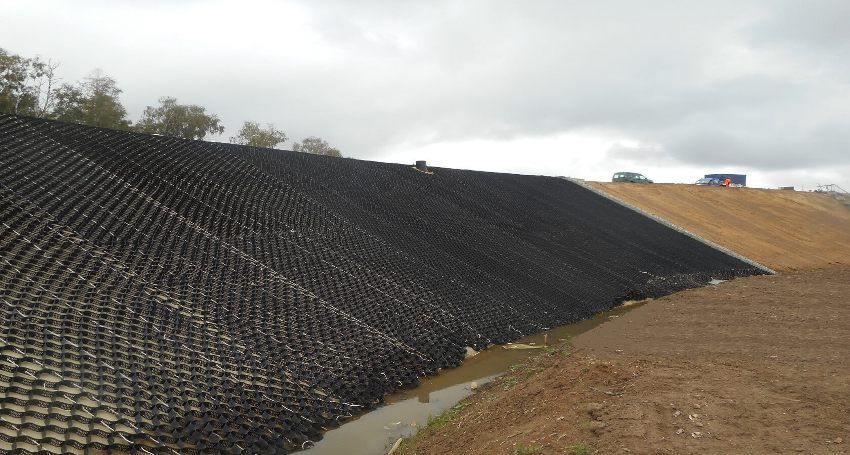 Geogrids are called polymeric cloths from materials not subject to rotting. Transformation under tension gives a voluminous cell structure resembling a chessboard or honeycomb. Raw materials for their production:

High-strength synthetic fibers are covered with a protective layer of polyvinyl chloride (PVC) to protect against damage from ultraviolet radiation. By type of production geotextiles are classified:

European manufacturers of similar raw materials used in enterprises Bonar (Slovakia). In the building supermarkets there is Armatex®RSM and Armatex®M – a composite geogrid for strengthening the slopes, the price is quite reasonable. 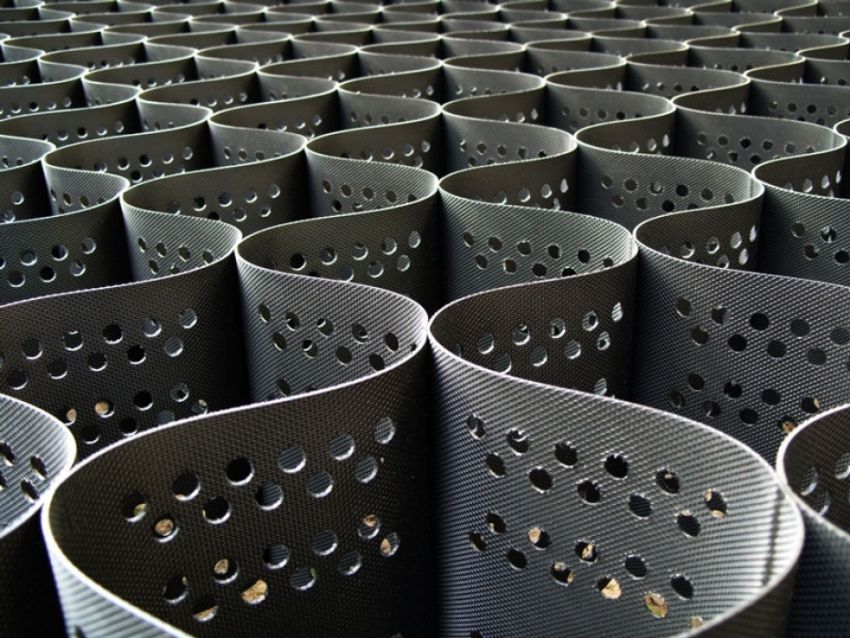 It is interesting! The plastic material is interesting in that when stretched, cells are formed for filling with soil or rubble with sand, increasing the coverage area.

The geogrid is produced from polyethylene tapes – on the same basis as polymer products for construction. Due to the resistance to rupture and resistance to weather and climatic factors, geosynthetics of the 3D format does not undergo rotting and destructive changes in the earth. They will always be in demand – durable polymer fibers are not destroyed by moisture and frost.

Rigid extruded geogrids are also produced from another, less elastic raw material – polypropylene. They pull out after a brief warm-up. In specialized retail outlets, you can buy geogrids to strengthen the slopes of Tenax®LBO and Tenax®TT – offers from Tenax (Italy). Ultraviolet rays and temperature fluctuations, increased acidity or alkalization of the soil, as well as aggressive microflora do not cause significant harm to geosynthetics.

Steep and relatively gentle slopes, hills and ravines typical of the landscape of most countries. Moscow and Rome, as is known, are built on hills, new facilities today require the strengthening of slopes with a geogrid. The products are designed for heavy loads – biaxial modules assume stretching in two directions. 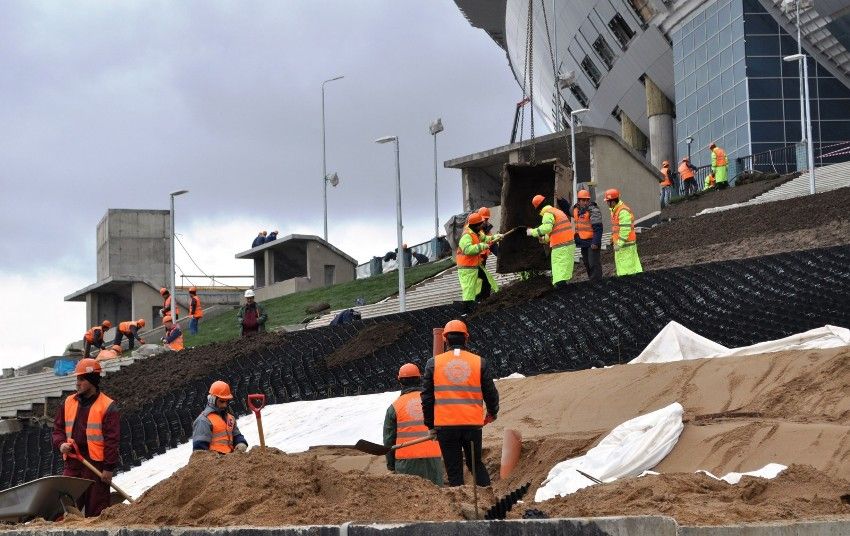 Uniaxial rigid structures made of high density polyethylene HDPE are used for retaining walls and stabilizing almost vertical structures. They have the longest service life – up to 50-100 years.

Without the attachment of a geogrid or polymer grid, the excavation line will lose its design shape, and the excavated soil will settle. Reinforcement safer to issue:

Cellular structure of polymers – an excellent basis for the design of gentle slopes. The surface is formed by embankment in the windows of natural or artificial aggregates. The laying grid is stretched above the surface, obtaining a honeycomb structure, which remains to be secured with anchors and filled with substrate: 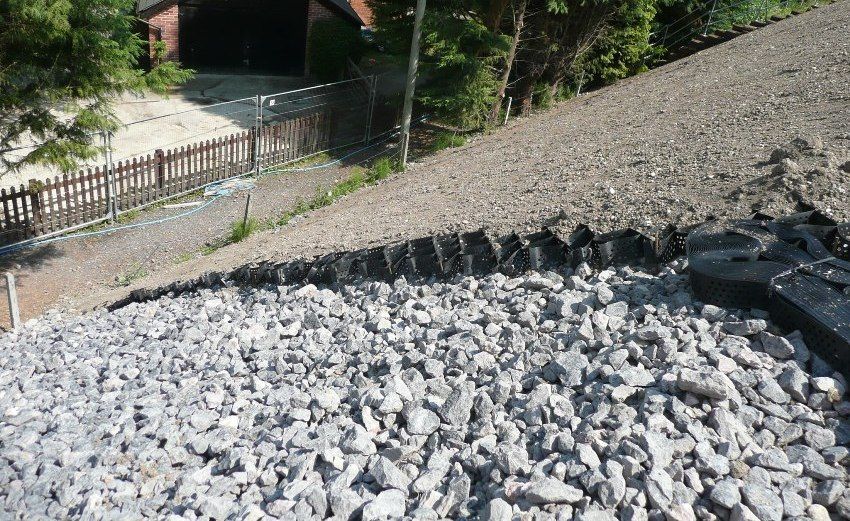 So far, nothing better has been invented for volumetric reinforcement of slopes, with the exception of concrete geo-facets for slopes (reinforced earth products). Their cost is much higher, loading and transportation is more difficult.

Polymeric volumetric geogrid for the reinforcement of crumbling and unstable soil has a lot of positive qualities: 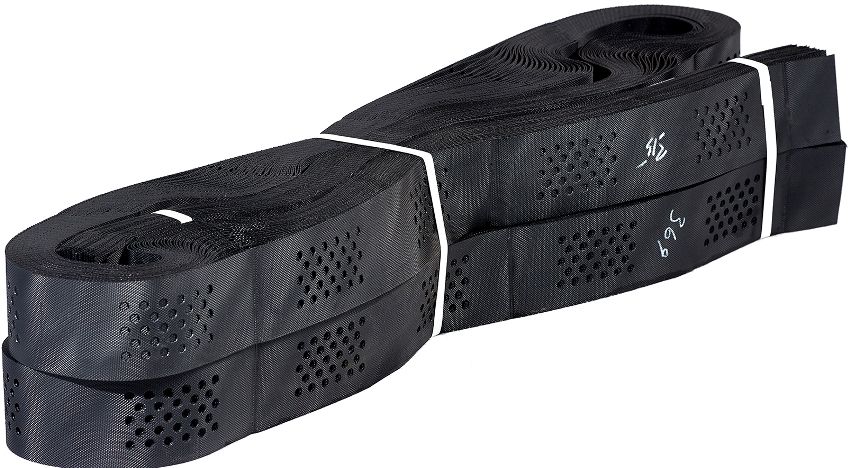 It is important to note that the weld seam of polymer tapes demonstrates a load of the order of 7–8 kN / m, as a rule, it does not reach such tests. Spike is produced by extrusion method – with short-term temperature exposure, increasing strength.

A geomat is a three-dimensional structure resembling a layer of fibrous polymers, multilayer polypropylene (one-on-one lattice overlay). The best tool for soil erosion, laying is very simple. Suitable for planting vegetation on the surface – the roots penetrate through the structure, let moisture through.

Geomats, like other lawn coverings, do not collapse when temperature drops and the negative effects of seasonal temperatures. Based on the results of laboratory studies, it can withstand from -300 ° C to + 1000 ° C. The polymer layer is not flammable, does not collapse under the influence of high acidity of the soil. 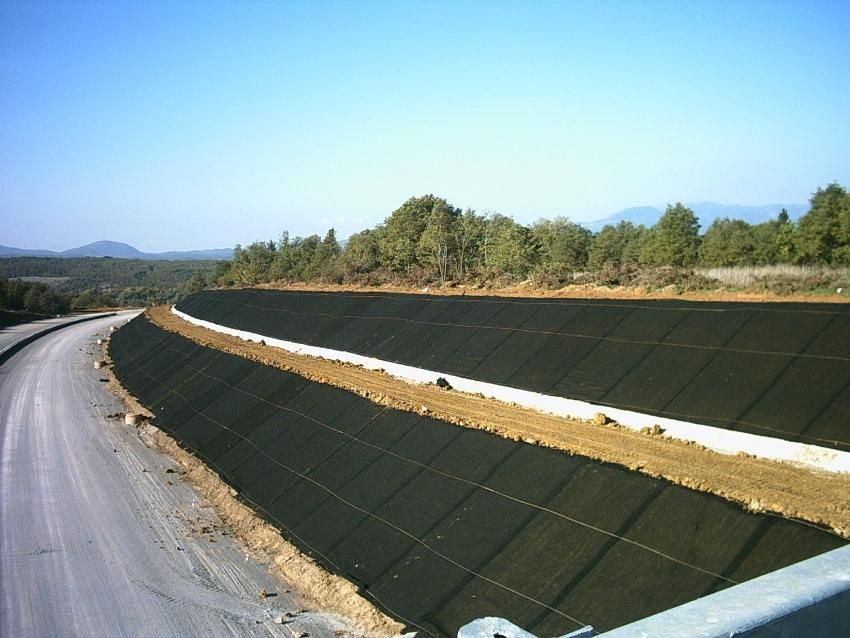 Such material is biomats, consisting of plant components (mainly coconut coir, quilted jute). Wide rolls are environmentally friendly, so the soil structure and suitability for fouling after the strengthening of the slopes do not change. A layer of soil and decorative stones is piled on top of the laid roll onto an inclined landscape design area.

Note! Biomats are not recommended to be laid in frosty weather. Excessive moisture and excessive watering are unfavorable for them.

Geotextiles – dense synthetic non-woven material of high strength, having a lot of advantages. It is used in suburban areas to strengthen the soil – as one of the “layers” and as a grid for a lawn.

Excellent frost resistance, the material is not subject to destruction by excess moisture in the soil and precipitation. Under its cover the pathological microflora does not develop. The material transfers stretching up to 120% of its own area, but before mounting it is recommended to level the surface. 3D geosynthetics are easy to cut and fit. 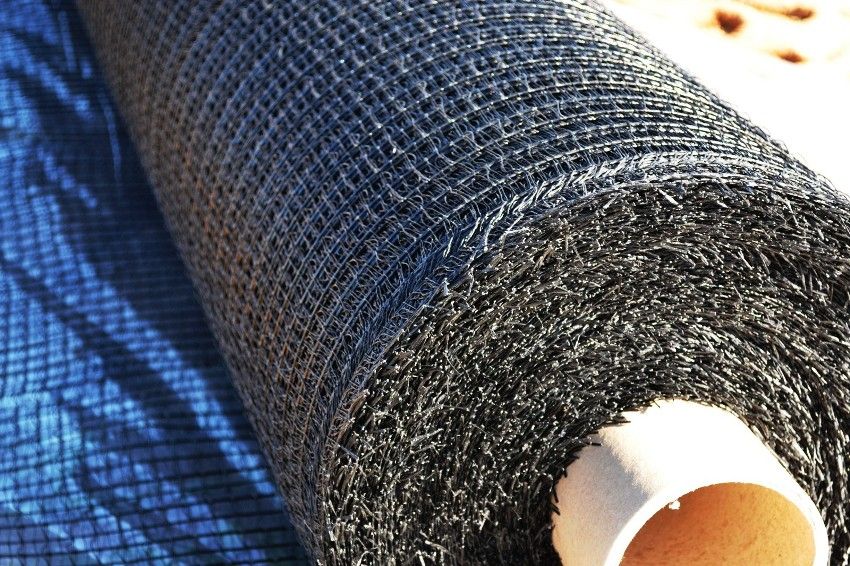 Geogrid made of synthetic fibers (polyester, polyethylene, fiberglass) is multifunctional and convenient. Flexible and plastic panels are not afraid of seismic vibrations and temperature drops. It is easy to transport in the form of rolls and laid on crumbling soil. Coating compresses the soil, reinforces the slopes, protecting the artificial relief from damage.

Cell device geogrid does not prevent the circulation of moisture and air in the surface layers of the soil. From above you can sow lawn grass, germinating, it additionally strengthens the slope. Dams and artificial reservoirs, cones of bridges and fresh ravines after landslides and mudflows are condensed with material.

To strengthen the complex terrain of the slopes are also used reinforced slabs, counteracting the landslide processes on unstable soils. With their help stabilize the load on almost vertical surfaces along the roads and embankments of junctions.

Armored soil geoplit – guaranteed stabilization of loads during the construction of roads. They are designed to improve the properties of loose soils, therefore, are used for fastening of supporting structures. Products provide aesthetic volumetric reinforcement – plates have uniform cells that retain bulk materials in which plants sprout. 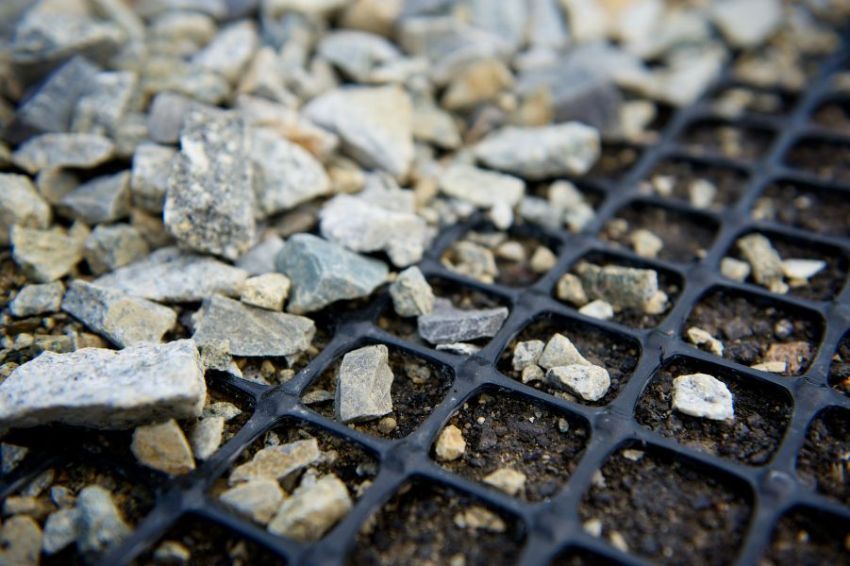 The combined flooring combines different types of reinforcement of slopes, including geogrid rolls and stones. For greater surface aesthetics, stones or pebbles are sorted by size, color and composition.

The technology of laying the geogrid with the combined method is about the same. Stones are piled on top of geomats, fixed with anchors 30 cm long. Next, textiles or mesh are laid, then stones (possibly in several layers) fixing the layers with polyurethane.

Gabions are heavy structures for preventing rockfalls and mudflows in the mountains. They are well laid at the base of the sloping sections along highways that have been used for nearly a century. These are ordinary blocks of metal fittings filled with stones of different sizes. Recently, they are actively used for decorative purposes – in landscape design. Metal mesh fill: 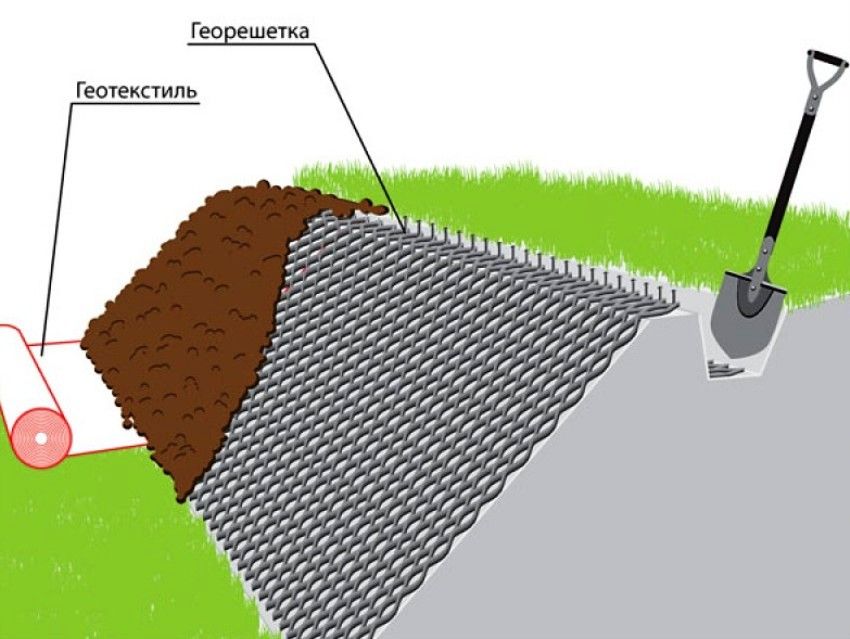 Technical gabions are applicable as stabilization of slopes of any type, especially where other types of fortifications are not applicable. Eco-friendly and inexpensive filler long and reliably serves. Such reinforcement of the slopes is advantageous in that the filling can be taken almost under your feet.

Helpful advice! Prepare a pad, marking the boundaries of the piling. Be sure to soil the soil after each layer of the geogrid to reinforce the slopes, removing the anchor at the end of the next stage.

Available cloth with a tape from 50 mm to 200 mm. The size of the cells also varies, you can choose under your soil filler – 160×160 mm, maximum 410×410 mm. To join the tapes in a checkerboard pattern, ultrasonic welding is used. The strength of polyethylene tapes is very high – about 10-15 kN / m (the indicator varies with different thickness of the cloth).

In the formation of landscape design, a special geogrid for tracks is used – narrower canvases that are convenient to work in the country. It is applicable both for laying a trench filled with pebbles and for forming a lawn adjacent to the walkway.

As you can see, the polymer mesh or geogrid for strengthening the slopes is a simple solution to complex problems of strengthening crumbling surfaces.

Ventilation in the frame house with their own hands. Scheme, calculation and installation of the ventilation system

Consignment bath sink on the countertop: style and practicality of use

Decorative plaster, photo in the interior and description of possibilities

Energy meter readings: transfer data in the most convenient way

LDSP: what is it? Features, benefits, manufacturers review

Stencils for walls for painting: a creative way of interior decoration

Pump Kid: technical characteristics and features of use

Consignment bath sink on the countertop: style and practicality of use