The grinder, which is also called the angle grinder (angle grinder), is a universal device. With this tool you can perform various types of processing, such as cutting, grinding, polishing, chipping, etc. The grinder is suitable for working with stone, metal, as well as wooden blanks. The effectiveness of the device depends on the correct selection of tips on the grinder. In order not to be mistaken when choosing the right product, you need to study its types. 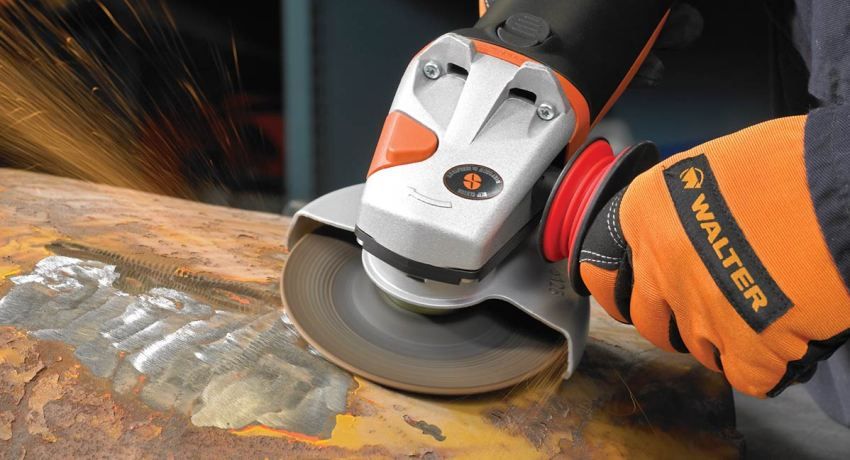 What are the nozzles for grinders: the main characteristics

On the modern market you can find many varieties of circles for angle grinders. A huge number of modifications can confuse an inexperienced person. Each type of nozzle has its own operational features that determine the design of the product. Differentiation of such tools occurs according to the following criteria: 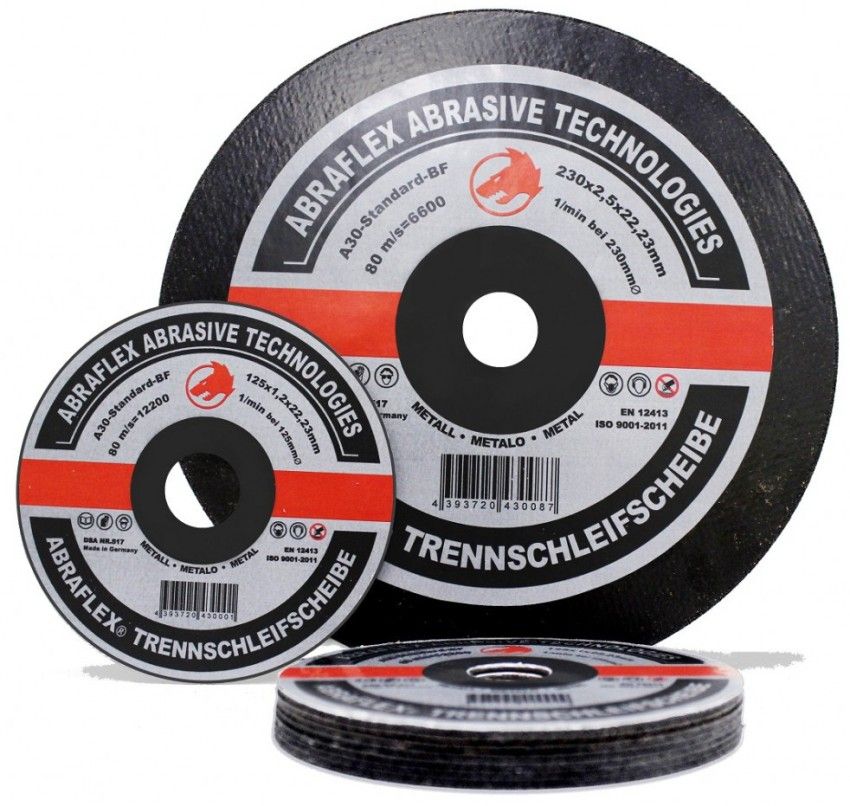 Today you can find many circles on the grinder, which are used for processing metal, wooden or stone parts. The purpose of the product determines its labeling. It should be noted that some types of nozzles are universal. For example, a stone circle is often used to cut ceramic tiles, concrete and brick products.

However, most drives are only suitable for highly specialized work. Nozzles for metal in any case can not be used when cutting wooden logs or boards. And the circles that are used for roughing steel, it is not accepted to apply for stainless steel.

Useful information! Why Bulgarian is called grinder? The answer to this question is very simple: in the USSR, the first samples of this device appeared in the 70s. They were delivered from Bulgaria, therefore such a name was assigned to the device. 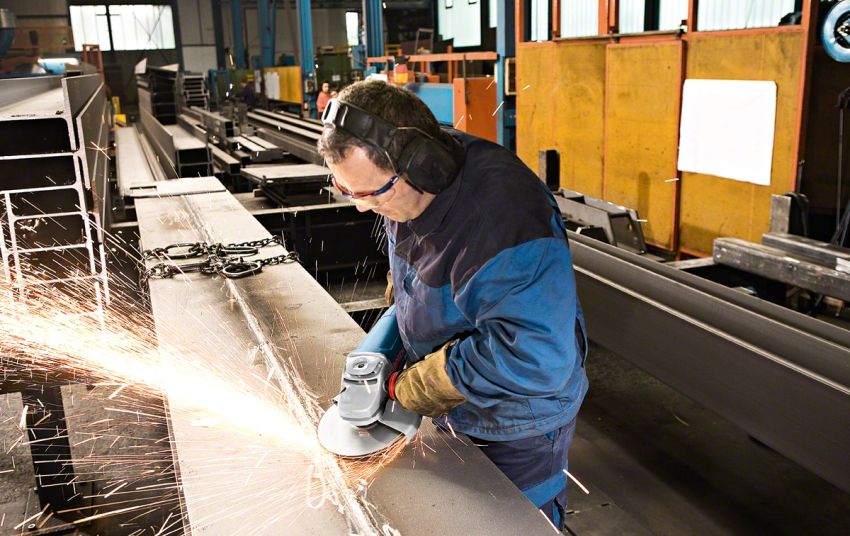 Angle grinders are used for cutting and grinding materials. If desired, you can pick up a circle for processing glass, plastic or marble slab. All tools for angle grinders are divided into types according to the class of processing, as well as the degree of rigidity.

Nozzles that are used for cutting various materials can be used to perform a variety of operations. Each device has a unique properties and design. Depending on the destination nozzles are:

Cut off. Such circles are used in the case when it is necessary to cut or cut material (rough). The detachable nozzle for angle grinders has the shape of a disk equipped with a cutting edge. In some cases, these circles are equipped with a solid cutting part, and sometimes – segmented. 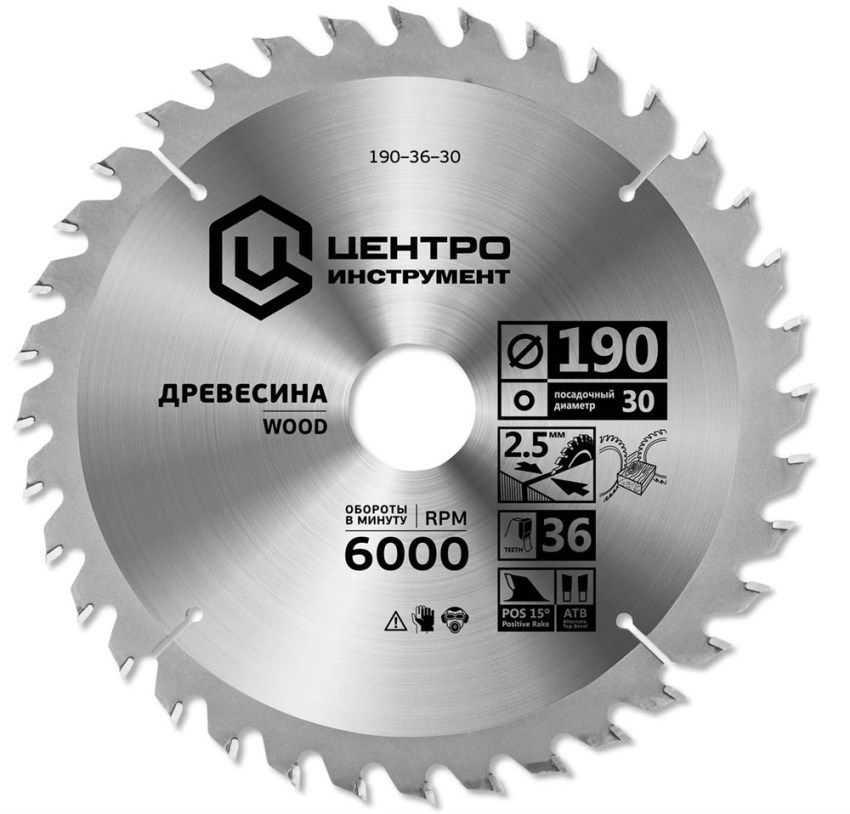 Saw. By the name it is clear that such products are used for cutting various pieces of wood. The peculiarity of these tips is that their cutting part has teeth. Such discs are widely used for cutting wood, drywall, chipboard and fiberboard. With the help of the saw blade, you can perform an even cut of ordinary and laminated boards. It should be noted that the teeth of the saw blade for the grinder may differ in shape, which affects their operational purpose.

Peeling. Such nozzles are used for grinding metal, concrete and wooden blanks. Using a similar disk, you can easily remove the old layer of paint or varnish from the surface. Grinding wheels are also used to remove the primer. If necessary, using these products is grinding.

Cleanup. Wiping nozzles are attributed to the peeling group. They are circles whose edges contain metal wire. Wiping discs are used to remove rust from metal surfaces, as well as to eliminate other types of persistent dirt. Most often they are used to prepare pipes for painting. 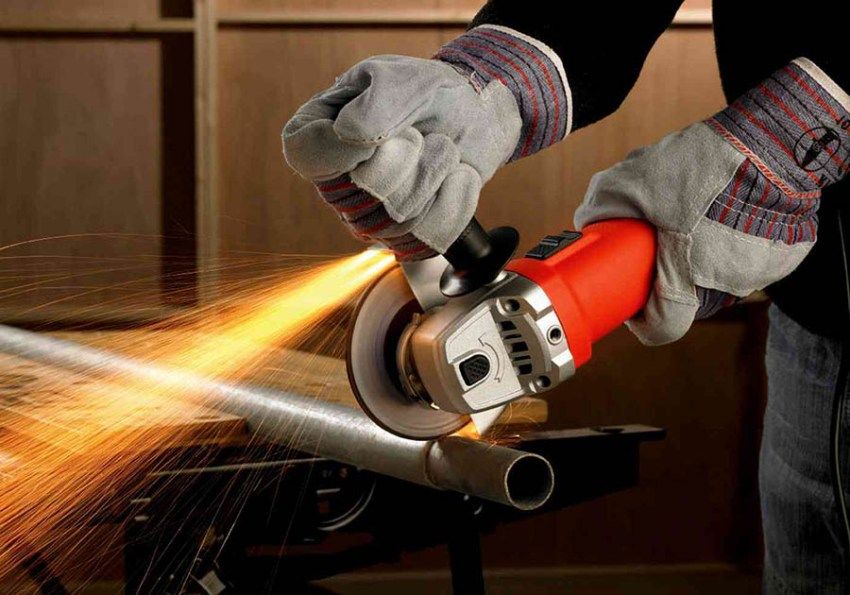 One of the most common varieties of stripping nozzles is the petal circle. This product is used for processing blanks of metal, wood and plastic. The flap wheel is a disc, at the edges of which small segments of emery paper are fixed. Depending on the nature of the work, the granularity of the working components is selected. On the modern market can be found varieties petal disk:

Grinding (grinding) nozzle for grinders with mandrel is used in the case when it is necessary to ensure high accuracy of work. Many products belonging to this group are used to eliminate burrs after cutting metal and plastic pipes.

Useful information! With the help of wiper wheels, final processing of welds is performed. 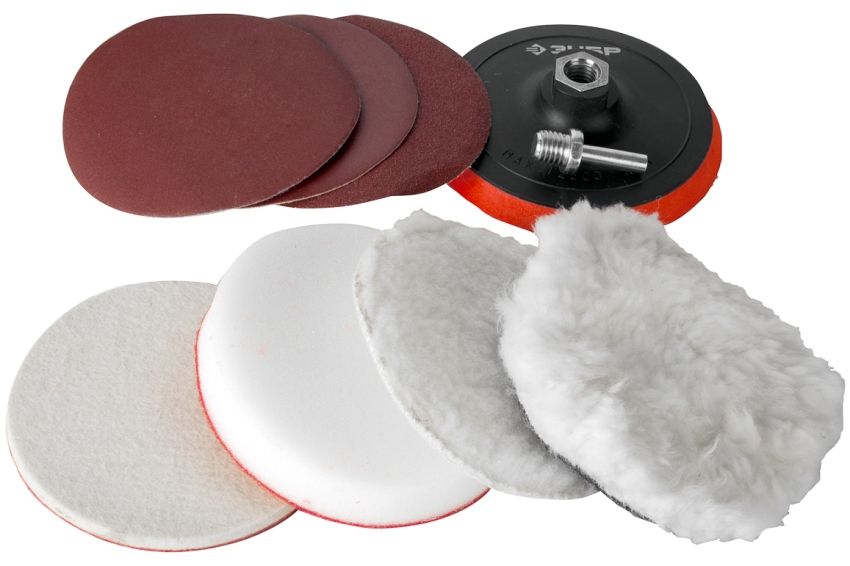 Nozzles for seams are used for the organization of stitches in stone products, concrete, as well as asphalt. Suture circles have the special design allowing to perform similar work.

Polishing. These products are used for polishing surfaces. Most often they are used after grinding. The following types of discs can be attributed to this group: felt, felt, and also emery wheel. Velcro is used to fix them on the instrument, so it is very easy to change them.

For the manufacture of nozzles, which are used during work with angle grinders, various materials are used. All of them are highly efficient, as well as made with regard to safety. For example, many metal circles have special slots filled with copper that prevent the disk from overheating during operation. Consider what materials you can buy circles for angle grinders. 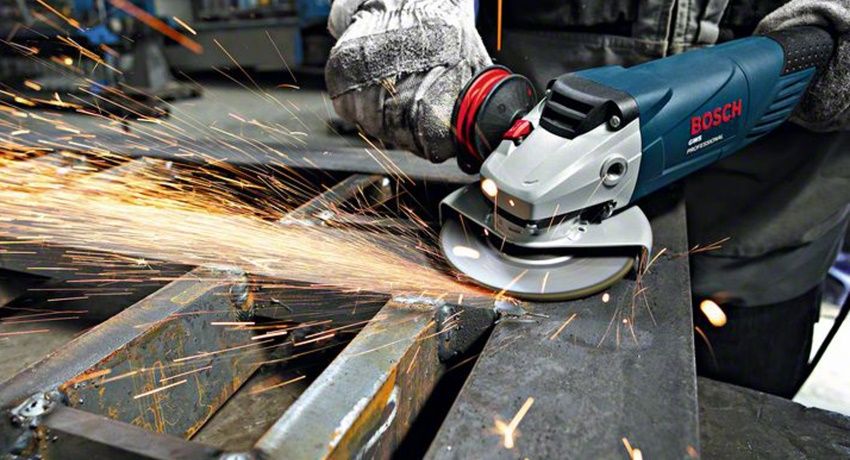 Diamond wheel. Similar products include two components. The first of these is the steel base, and the second is diamond spraying. These discs are used for processing metal blanks, as well as products made of stone, concrete, ceramics and glass. The diamond wheel for the grinder differs in high efficiency and accuracy of work. With the help of it is the thinnest cut of the workpiece.

“Turtle”. Such a nozzle also has a diamond coating, but the base in this case is represented by flexible rubber, which is characterized by high strength. This disc name is due to the corrugated structure. Diamond coated circles are fixed to the base by means of velcro.

Carbide disc. For the manufacture of such devices are used metals, an alloy which forms a strong connection. The edges of such circles contain solder, which consists of high-carbon molybdenum steel. Also, chromium and nickel impurities are included in the solder, which increases the resistance of the product to adverse operating factors. Such discs are used for cutting metal (more rarely – wood). 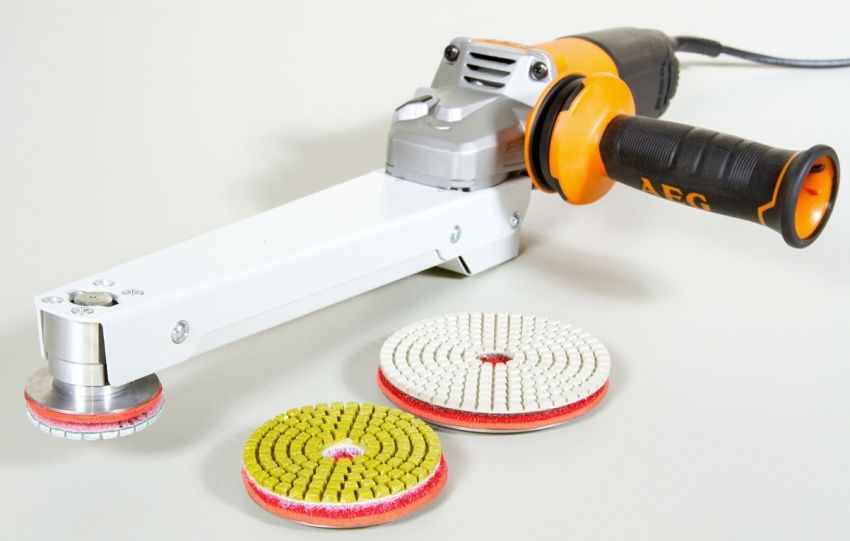 Abrasive. Such a circle is made of latex paper, the main characteristics of which are density and resistance to moisture. Such devices for angle grinders include in their structure a special reinforcing mesh. An abrasive layer is applied to such a substrate. Circles of this type used for grinding may have a polymer base.

Sweep. This disc includes a metal wire, through which the removal of paint, varnish and heavy dirt from the treated surface. The diameter of the wire is selected depending on the nature of the work.

Note! Separately, it should be said that the nozzles used for angle grinders include support plates. Such products are made of polymeric materials or durable rubber. They are used in combination with some grinding and polishing tools.

Cutting a wide variety of materials is the most popular operation for which LBM is used. A very important point necessary for the performance of this task is a competent selection of the nozzle. The choice is made depending on which material will be processed. For example, cut-off wheels are used for cutting metal, for the production of which a crystalline mineral is used – corundum. 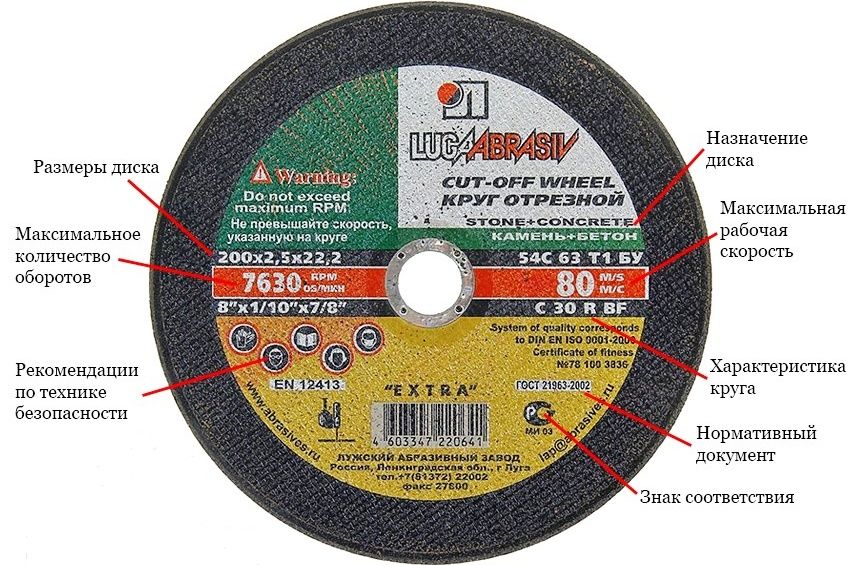 All circles for grinders are marked in color depending on their purpose. For example, it is common practice to use discs with blue marking for cutting metal objects. It is important to remember that cutting wheels are recommended to be installed on grinders with adjustment of turns.

Cutting products for metal processing are also differentiated by size. The main geometric data of such attachments include:

Metal cutting discs are available for three types of angle grinders: small, medium and large. The diameter of these products varies from 115 to 230 mm. 125mm circles are very popular. Products with a diameter of 150 and 80 mm are less common.

The thickness of such devices ranges from 1 to 3.2 mm. Accordingly, large circles are made thicker in order to have sufficient rigidity. And at small nozzles this indicator can be absolutely different. 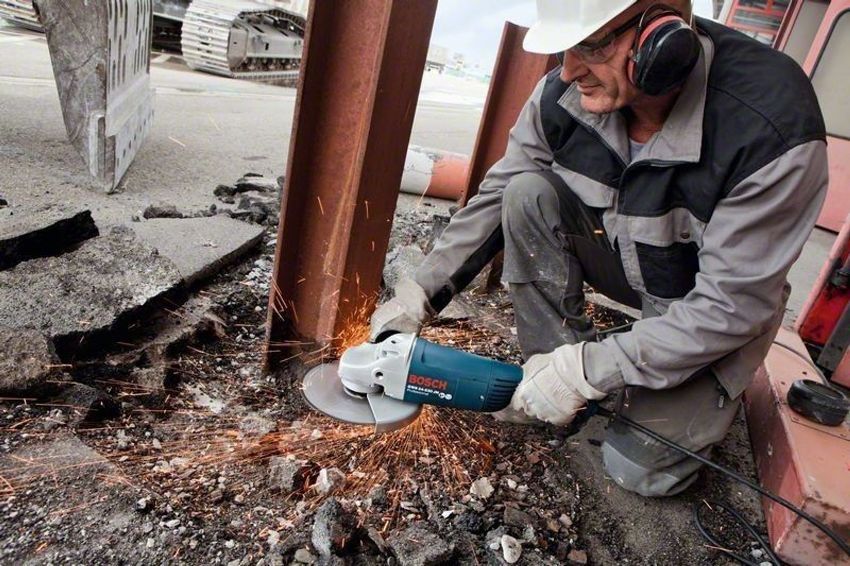 Cutting nozzles, which are used to work with stone and concrete, are made of a completely different material – silicon carbide. Such an abrasive ensures the efficiency of angle grinders when cutting white brick, as well as slate. The most common type of grinder is the angle grinder 125 (with adjustable speed). This is due to the fact that it is the most functional and has a low weight.

For the processing of red brick silicon carbide is not suitable. In this case, it is common to use diamond-coated circles applied to a metal base. 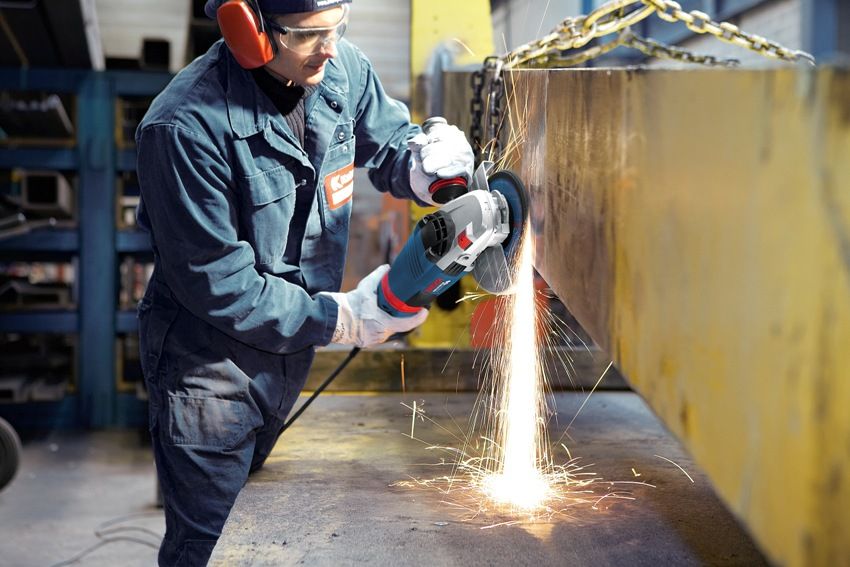 LBM is a very common tool that can be purchased on the market, in a store or ordered online. This device has many options for use precisely due to the possibility of changing the nozzles. Before purchasing a grinder, you need to take into account what it will be used for and study the range of discs. Choosing the right nozzle will allow you to do the job quickly and efficiently, and most importantly – safely.

From this article you can find out what features a bath may have: photos,

The kitchen is a special room with a specific microclimate. The floor should not
A unique offer for you

Drainage system around the house: a drainage device for the foundation of a residential building

Which floor screed is better: wet, dry, semi-dry or self-leveling

Boilers long burning on the wood with their own hands, loading 24 hours

Hammer paint on metal and the advantages of its application

Waterproofing the floor in the apartment before the screed: types and details of installation

Linoleum: photos of coatings in various rooms and tips on choosing a material