An advantageous option for supplying heating to the room and providing hot water is the waste oil boiler. The device is characterized by a simple design that allows you to make it yourself. This will help save money. If this possibility is excluded, you can purchase a boiler to work out the factory assembly. Currently, the product range is presented in a wide variety. 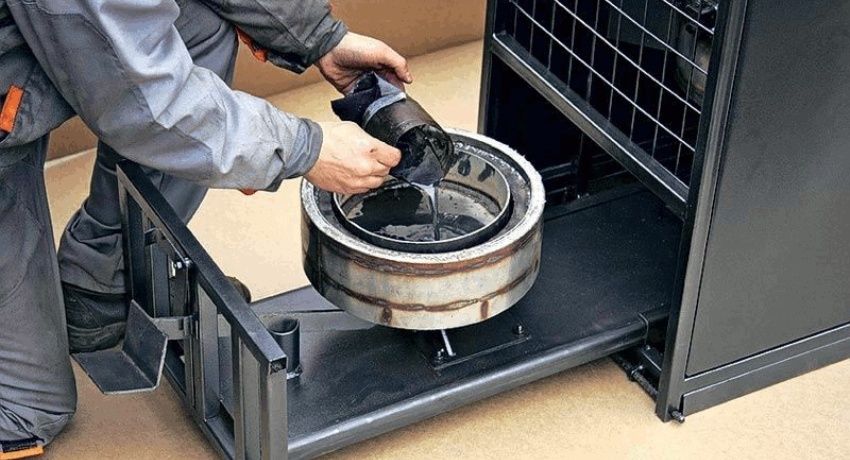 What is a waste oil boiler

Today, heating equipment, which operates to work out, is very popular. This is due to a number of distinctive advantages of the device. The first is the low cost of installation and the availability of fuel, which can be bought for a nominal fee. Heating for mining does not need to use resources in the form of electricity and gas, which makes it economically viable. 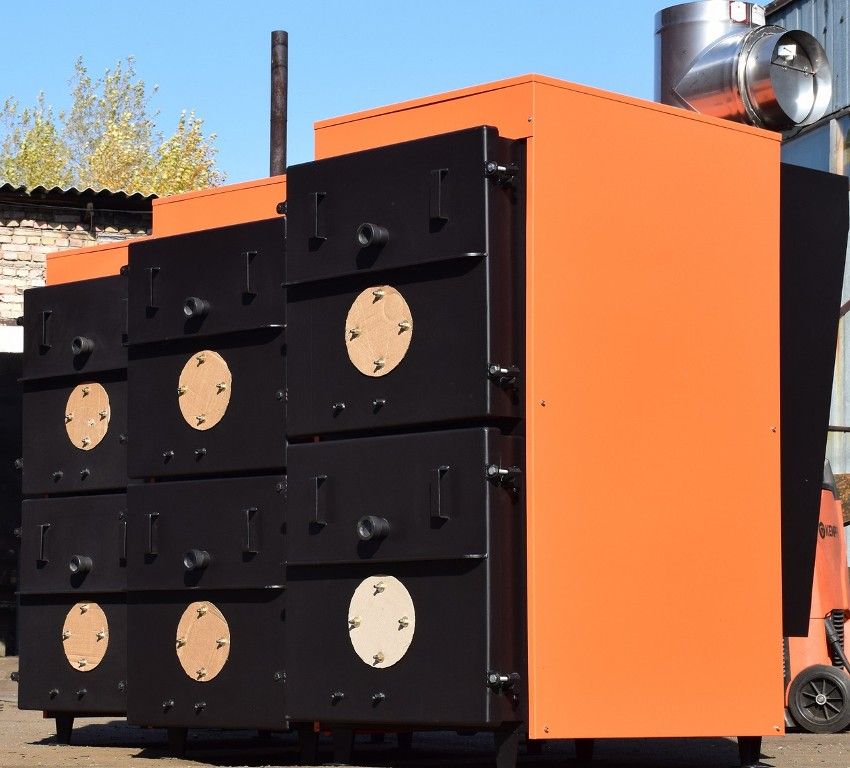 Important! The full use of products of mining in full has a beneficial effect on the environment, excluding the utilization of oil and its penetration into the ground and into reservoirs.

When the boiler is set up correctly, the waste oil is completely burned, so that no toxic combustion products are formed. The device consists of a minimum number of parts that can be seen on the boiler diagrams. This increases the reliability and durability of the structure. It does not take much time to warm up the boiler. Forced convection contributes to the rapid temperature rise in the room.

Despite numerous advantages, the boiler has some drawbacks. During operation of the device, moisture from the air evaporates and oxygen is burned, which adversely affects human health. Therefore, the boiler should be located in a non-residential area with a good ventilation system. Devices on working out quickly polluted. This applies particularly to the plasma bowl and chimney.

For such a boiler can be used different versions of waste oil, which is characterized by an abundance of different impurities. Therefore, to ensure a long period of operation of the device in the place where the oil is supplied to the boiler, you should install a filter that needs to be changed as it gets dirty. 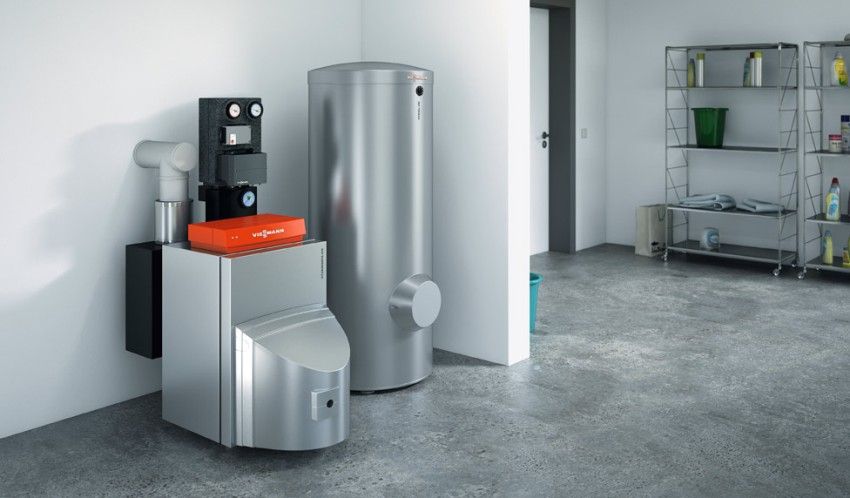 The boilers for a private house with waste oil, as well as for the garage, workshop or production premises have a simple structure. They consist of two compartment chambers: the evaporative chamber and the combustion chamber. In the first compartment, the process of preparing the used oil for burning is performed. In the second – it is burned. The principle of operation of the device is as follows.

From the tank with waste oil, the pump delivers the substance to the evaporation chamber, which is located in the lower part of the apparatus. It maintains the necessary temperature sufficient for heating and subsequent evaporation of the mining. Oil vapors rise to the upper zone of the housing where the combustion chamber is located. It is additionally equipped with a duct in the form of a pipe with holes. With the help of a fan, air is fed through the duct into the chamber, where it is mixed with oil vapor. The resulting mixture burns without residue.

The heat exchanger spreads the resulting heat. Formed products of combustion enter the chimney. Mandatory process is preheating. The oil contains many impurities. Under the action of a certain temperature, the process of decomposition of a substance into simple carbons takes place, which are subsequently burned. As a result, water vapor, nitrogen and gas are harmless to the body. 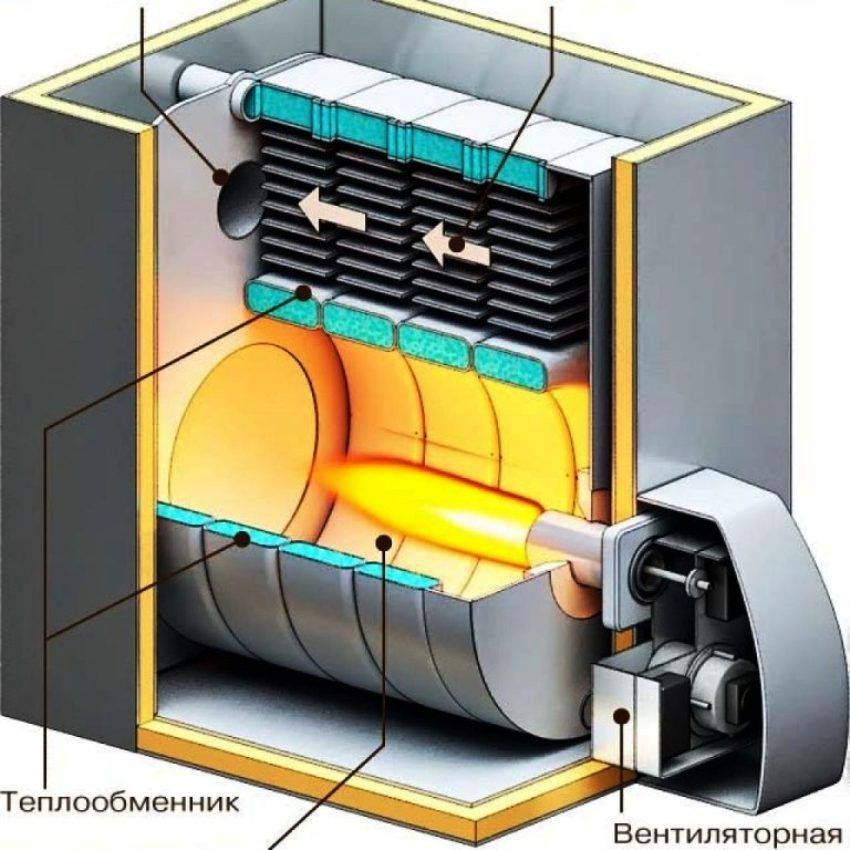 Full oxidation of carbohydrates is possible only at a temperature of 600 ° C. If this value is not observed, during the combustion process, a lot of toxic substances are formed that are extremely dangerous for human health.

There are three options for waste oil boilers: water heating, heating and household. The first option is an alternative to the modern boiler. Having a platform design, the device heats the flat surface where the water tank is located. At the outlet of the tank there is a small pump that adjusts the pressure in the system.

Important! To change the temperature of the water is very difficult, so if necessary it is recommended to dilute it with cold.

For hot water boilers used water tank is used with a volume of not more than 140 liters. It heats up over 2 hours, which is several times faster than the speed of a modern electric boiler. The oil water heater can operate in two modes: fast and wick. The first option is used to heat completely cold water. The wick mode allows the water in the tank to be heated. However, this will require a large amount of fuel resource. 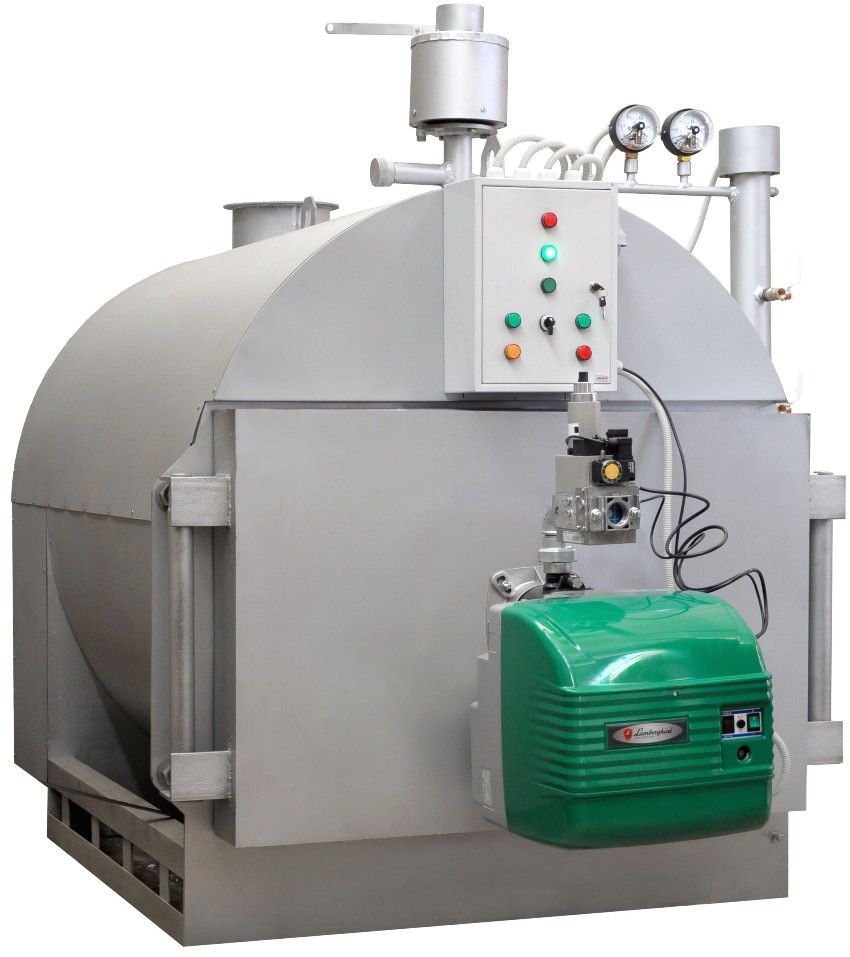 Important! Oil water heaters are installed in the basement because they are not transportable.

Household boilers are the ideal solution for country houses. They have a built-in gas cleaning mechanism, which contributes to the operation of the device without smoke. Such devices are mobile structures that allow you to transfer them to any place without affecting the performance of the product. This multifunctional device allows not only to heat the room, but also to heat food. The unit can be used outdoors or while traveling.

Automation for waste oil boiler can perform various functions. Here you can configure the control for heating the coolant, the air temperature in the room. Such devices are installed on the floor. Their cost depends on the functional features of the device. 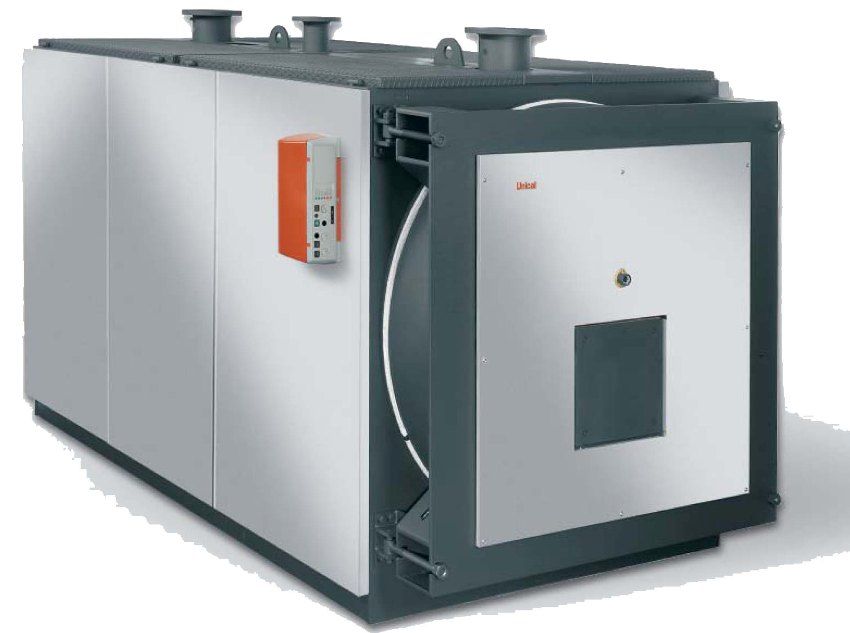 The heating boiler for waste oil should be located in a non-residential area. As a rule, for heating the house it is installed in a special extension. Despite the fact that modern devices are equipped with an improved filtration unit, in the process they emit an unpleasant smell of engine oil.

The inside of the unit is equipped with a heating unit with a water tube and a hydraulic pump. The last element can operate from the electrical network or from the energy generated by the apparatus itself. With the help of a hydropump in the circuit, the coolant is circulated in the form of ordinary water.

The principle of operation of the device is as follows. In the combustion chamber, the oxidation of oil vapor and air masses, which come under the influence of a ventilated compressor, takes place. The level of fire is regulated by a hose with a valve. The ventilating device is the only movable element, as a result of which it can break down.

Such boilers are characterized by high performance and the ability for a long time to maintain the air temperature in the room. The fuel tank is located on the floor, and the air heater can be mounted on the wall or ceiling. 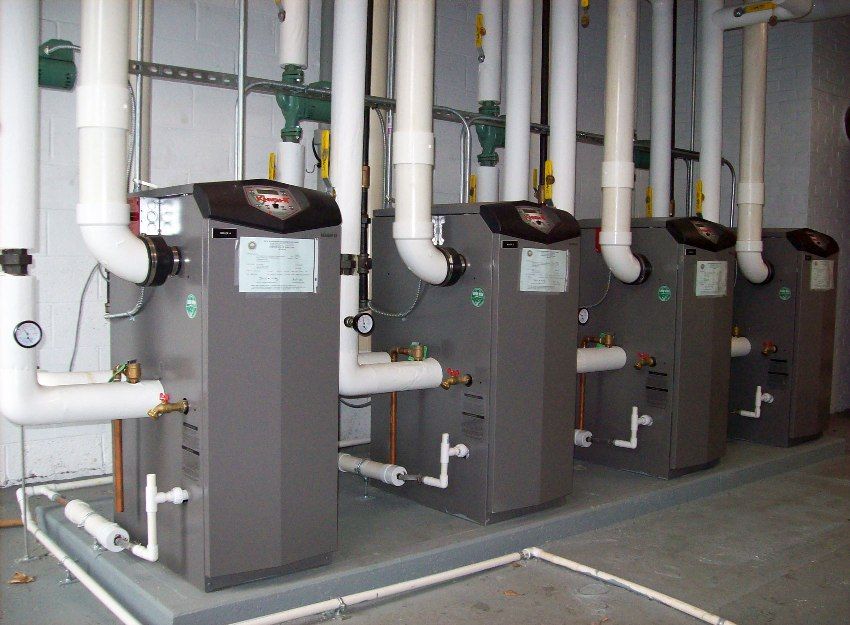 The most important component of the combustion process is preheating. This will allow the heavy substance to oxidize to light components. To achieve this result, you can create a thick-walled red-hot bowl made of metal, where the working out will be fed in drops.

When oil enters the hot metal, the substance turns into vapors, which are discharged into the combustion chamber. There they must be mixed with air for better combustion, for which ducting is used. It is equipped with an impeller, due to which the flow is swirled, which contributes to a prolonged stay in the combustion chamber of the oil-air mixture. Only in this case the fuel will burn completely.

To carry out the process of heating the evaporating bowl, a wick impregnated with fuel should be placed into it. Next, add a little diesel or gasoline and is set on fire. When the metal is heated to the desired temperature, the oil flows. This process is simple, but very dangerous. Therefore, it is important to properly organize the intake of a substance into a nozzle for a waste oil boiler. 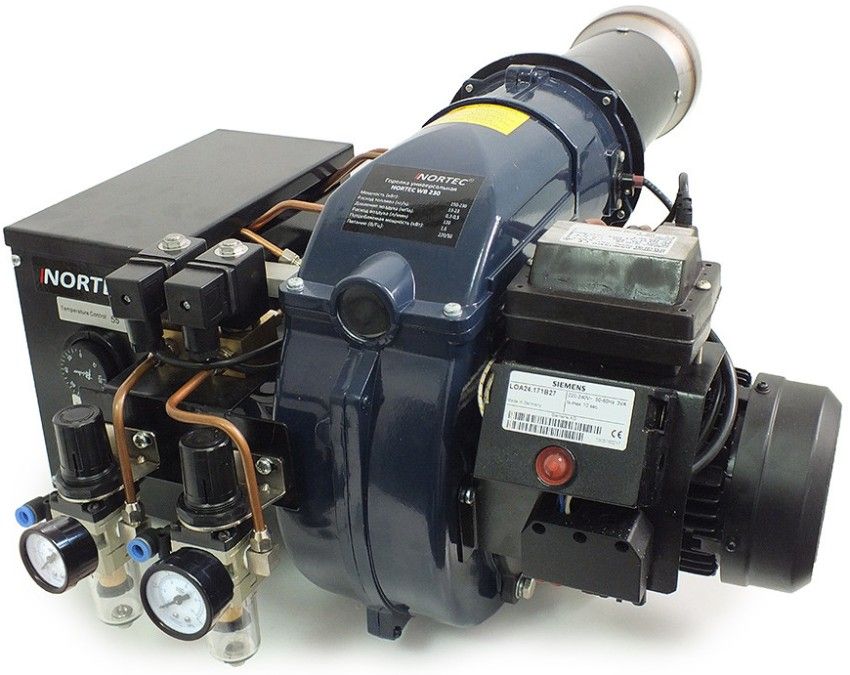 If the oil will flow, the fuel will not have time to burn. As a result, toxic components that are hazardous to human health are formed. For effective combustion without smoke, droplet fuel supply should be organized. For this purpose, a hose is used, at one end of which a filter is installed. It is better to use full oil filtering automobile element. Then a fragment of a medical dropper with a castor-regulator is put on the hose. The element is fixed on the fitting. The oil from the dropper is sent to the funnel, which is connected to the pipe. She feeds the fuel into the combustion bowl.

Based on the study of the drawing of the boiler with their own hands on waste oil, the preparation of the following necessary materials and tools: 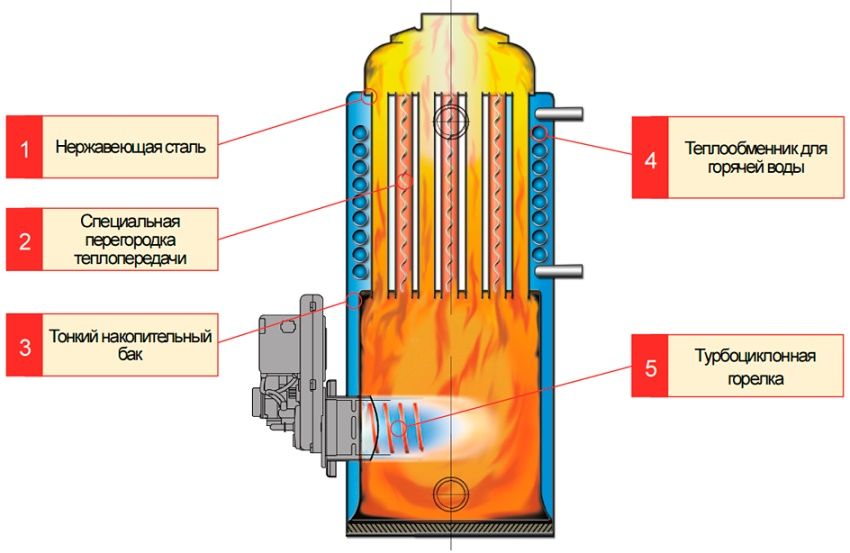 Helpful advice! To facilitate the creation of a homemade boiler to work out, you can use ready-made barrels for oxygen or propane.

The body of the boiler is divided into two parts. At the bottom there will be a heating radiator, and at the top – a water jacket.

The process of doing the boiler with your own hands on waste oil begins with the manufacture of an internal tank in the form of a tank with a water jacket, a channel for supplying oxygen and an oil tube. 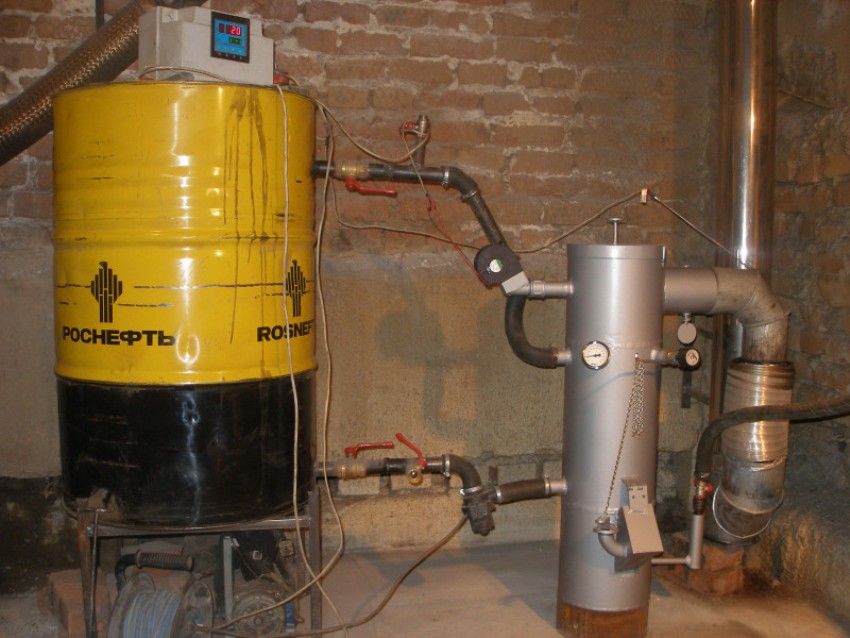 The dimensions of the tank elements are applied on the sheet of metal according to the boiler drawing on waste oil. All parts are connected by welding. In the bottom of the case is the door to remove the bowl and ignite the oil. To speed up the process, the body can be made from a fragment of a pipe with a diameter of 500 mm and a length of 1 m.

Two round-shaped elements are cut out of metal plates, which will play the role of the bottom and the cover of the case. In the upper part a round hole is made, having a size corresponding to the diameter of the perforated pipe in which it is inserted and welded. The body is covered with two plates by welding. Legs from reinforcing bars are attached to its bottom. 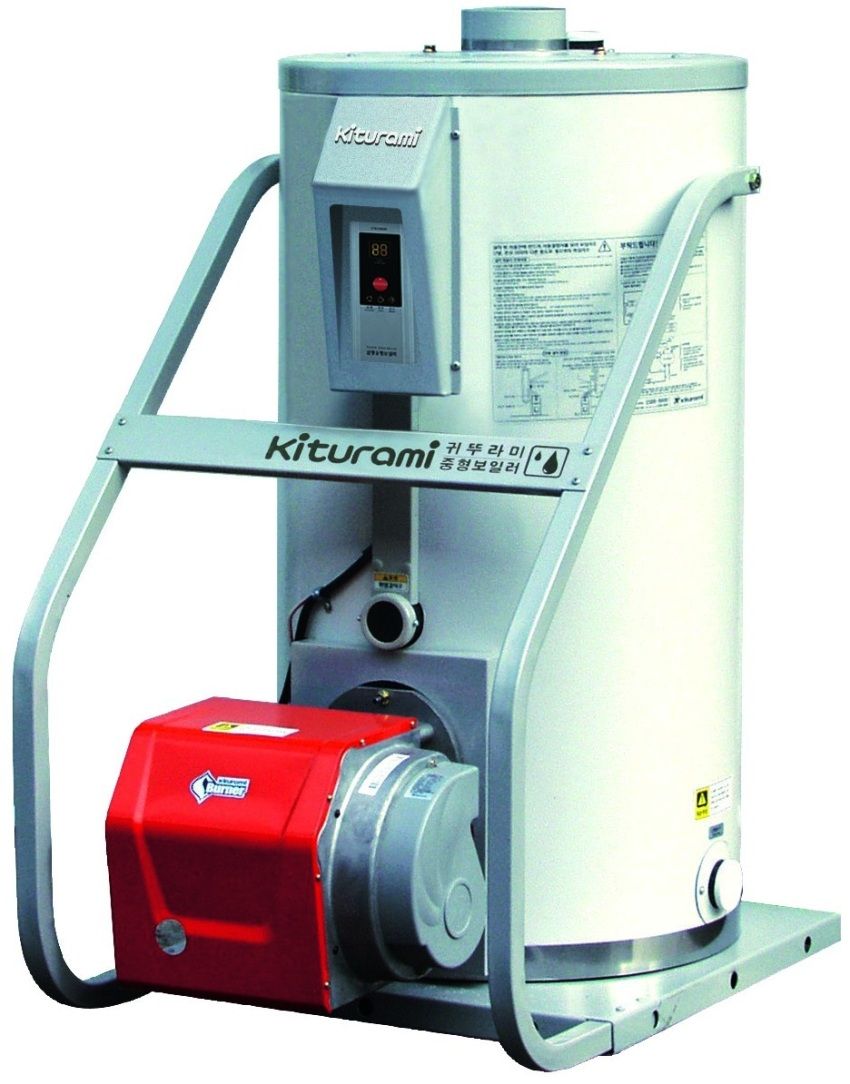 Currently, waste oil heating is very popular. This is primarily due to the economic viability of this option. Boilers for testing are characterized by a number of distinctive advantages, but the devices of factory performance are quite high cost. To save money, the device can be made independently, having studied all the details of the process.

Beautifully decorated ceiling, of course, is able to attract any view. The general perception

The benefits of water procedures for children have long been known. They quench the
A unique offer for you

Warm floor under the laminate on the wooden floor: types and features

How to check with a multimeter transistor: test various types of devices

Thermal curtain on the front door: the key to creating a comfortable microclimate

Decorative stone in the interior: stylish design of the house

Weather stations for the home: the possibilities of “smart weather forecasters”

Wall-paper for a bathroom: the universal decision for the stylish room

Which interior doors are better to choose for an apartment: criteria, nuances, tips