The fashion for the construction of environmentally friendly housing predictably returned the former popularity of wooden houses. This natural material has indisputable advantages: it is economical, durable, aesthetic, has a small thermal conductivity and allows you to create a very special microclimate in the room. However, fungus, mold and moisture can negate all these advantages. The vapor barrier for the walls of a wooden house will be the way out. 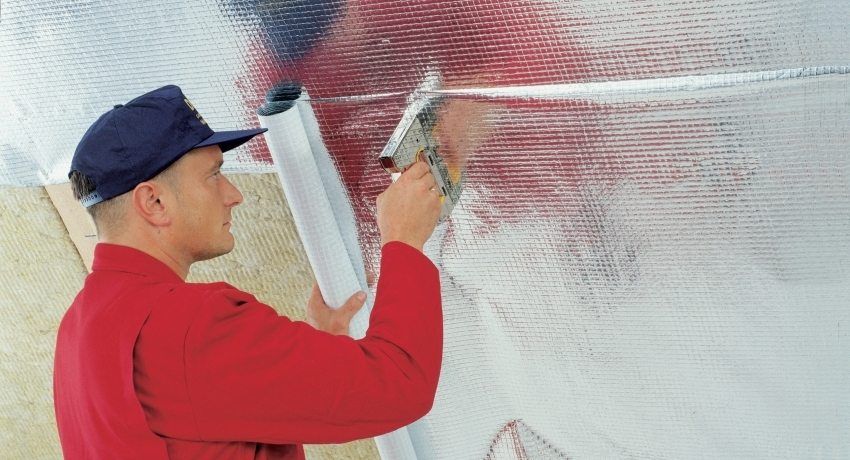 One of the distinguishing features of the tree is its ability to “breathe.” In simple wooden houses, built in the old fashioned way, this was quite enough to ensure sufficient circulation of steam between the interior and the street.

In modern homes, however, an important role is played not only by environmental friendliness, cost and beauty, but also compliance with energy saving standards. Because of this, the usual wooden wall has evolved, in fact, into a multi-layered cake from a bar, insulation, waterproofing materials and finishing.

Such multi-layer prevents the free circulation of steam. As a result, it accumulates in the insulation, deforming it and reducing the insulating characteristics, and condensate gradually destroys the tree, causing the formation of mold and fungi, changing the shape of the logs, causing the development of cracks and disrupting the tightness of the joints. Thus, it became necessary to add another layer to the wall cake – the vapor barrier layer. 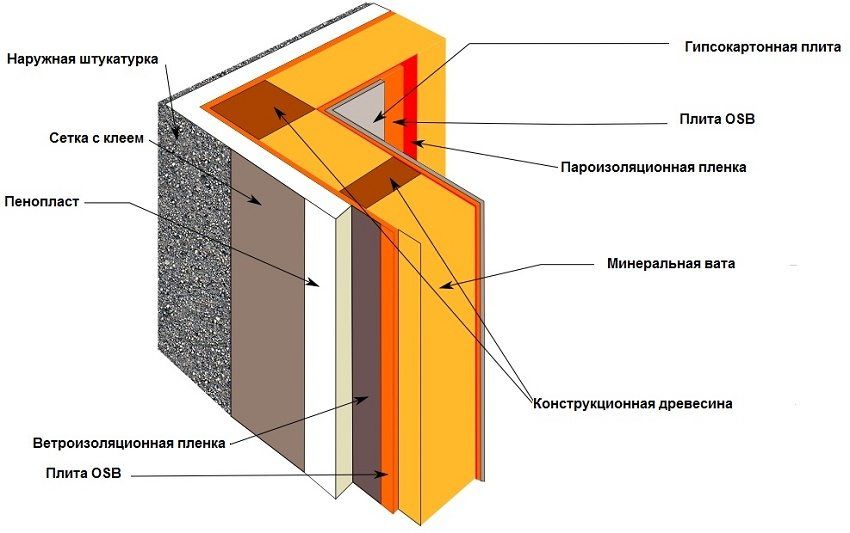 However, even in a modern wooden house, vapor barrier is not always required. A carriage, semi-sheet, chopped with an ax or a sawn by hand, due to its inherent natural high humidity, can dry for many years, preventing it from going to internal work. In this case, the installation of a vapor barrier makes it possible to significantly save construction time, protecting the material from rotting and fungus, and the insulation – from moisture accumulation.

Helpful advice! Glued or rounded timber still at the production stage loses most of the moisture, the standard factory dimensions and grooves make it possible to achieve a considerable tightness when mounting walls, which makes it possible not to use vapor barrier. 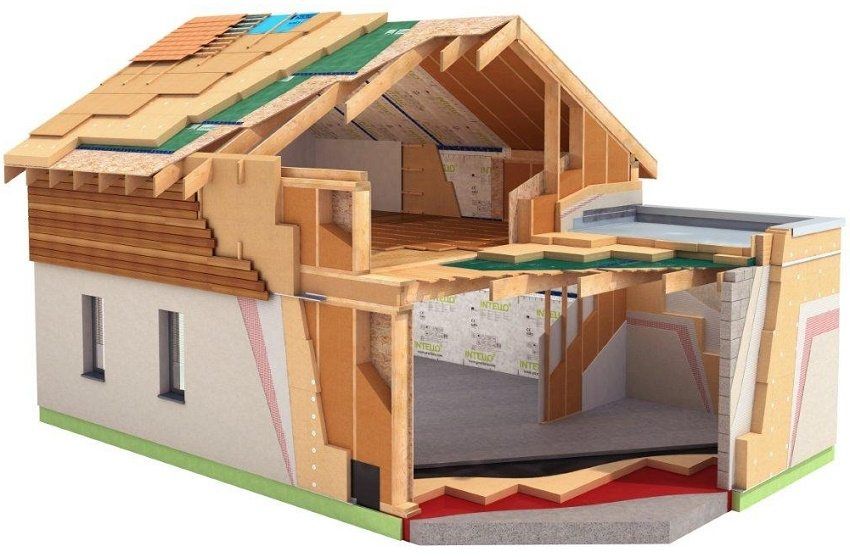 Also pay attention to the material used as insulation. For example, mineral wool, one of the most common insulating materials, absorbing moisture, gradually begins to settle, deform, and its protective properties are reduced. This implies the use of a vapor barrier. Unlike mineral wool, the foam is laid in such a way that the joints are sealed, and the vapor barrier material is completely impermeable to moisture.

The choice of material for vapor barrier walls depends on many factors: on how you plan to warm the house – outside or inside, on the condition of the building, on financial possibilities, on the type of insulation. 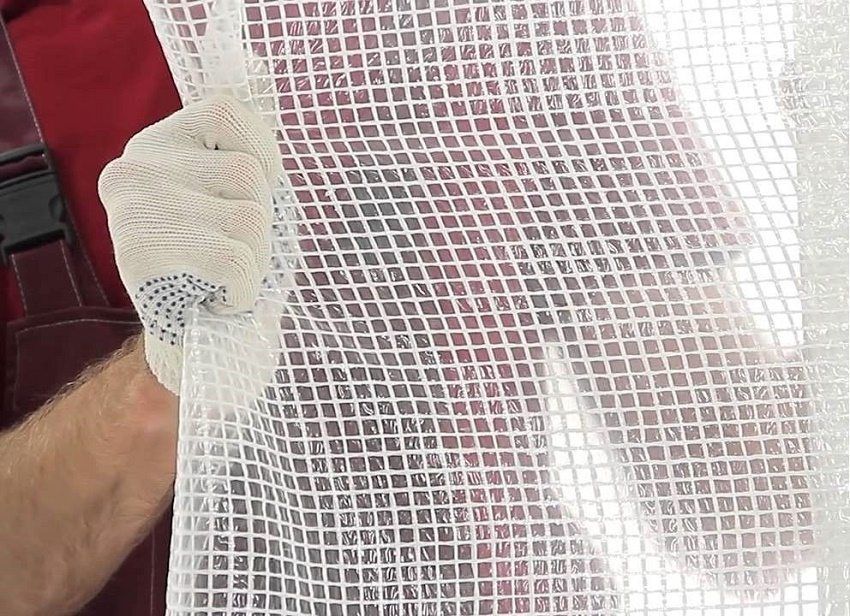 The most democratic type of vapor barrier is a polyethylene (preferably reinforced) film. It is affordable, but not durable and durable. Its main drawback is full air and moisture impermeability, which leads to accumulation of moisture on the surface and significantly reduces its vapor barrier properties.

Helpful advice! Polypropylene film is devoid of some of the shortcomings inherent in the plastic film. It is stronger, and its cellulose fibers prevent the formation of condensate. 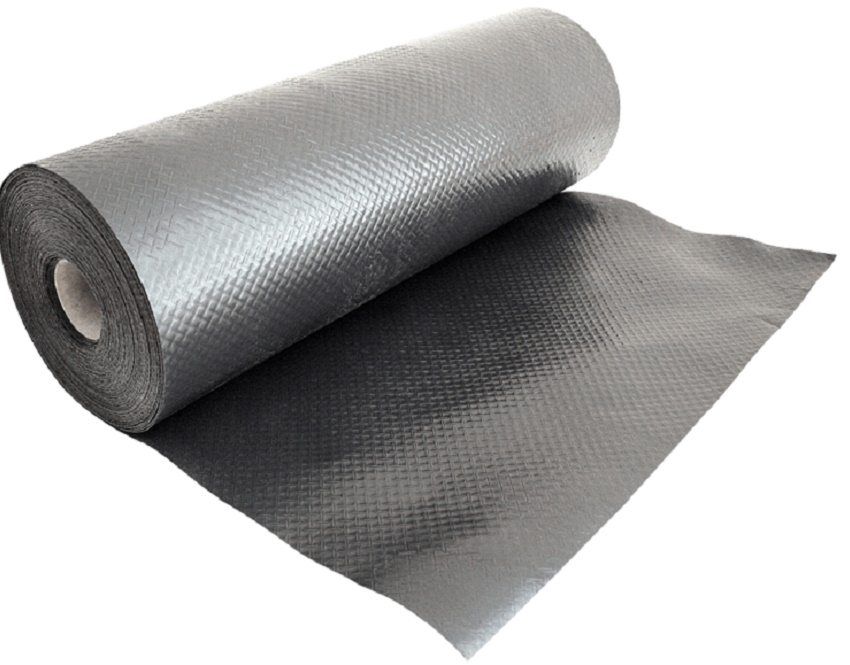 Laminated polyethylene film with aluminum coating or aluminum foil (more than 0.02 mm thick) not only provide vapor insulation, but also reflect the heat inside the house, ensuring an optimal level of energy saving.

Insulation for the walls of the house outside the siding: choose the material and method of installation. The choice of the type of insulation. Features of materials, their advantages and disadvantages. The main stages of installation.

Roofing material is also often used to vapor barrier the walls of a wooden house, and the choice is made on bitumen, with a double-sided coating. 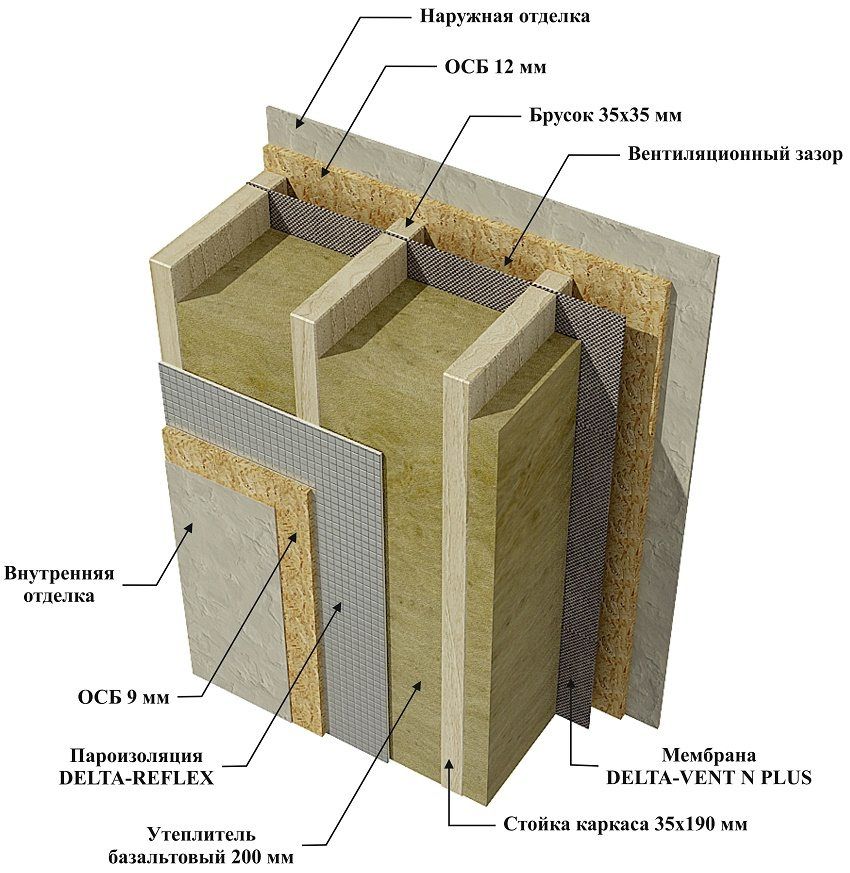 Excellent performance has a diffusion membrane. This breathable durable material can have several layers, can be one-sided and two-sided and additionally provides hydro and thermal insulation. Its disadvantages include high cost. In addition, it is not suitable for vapor barrier exterior walls. 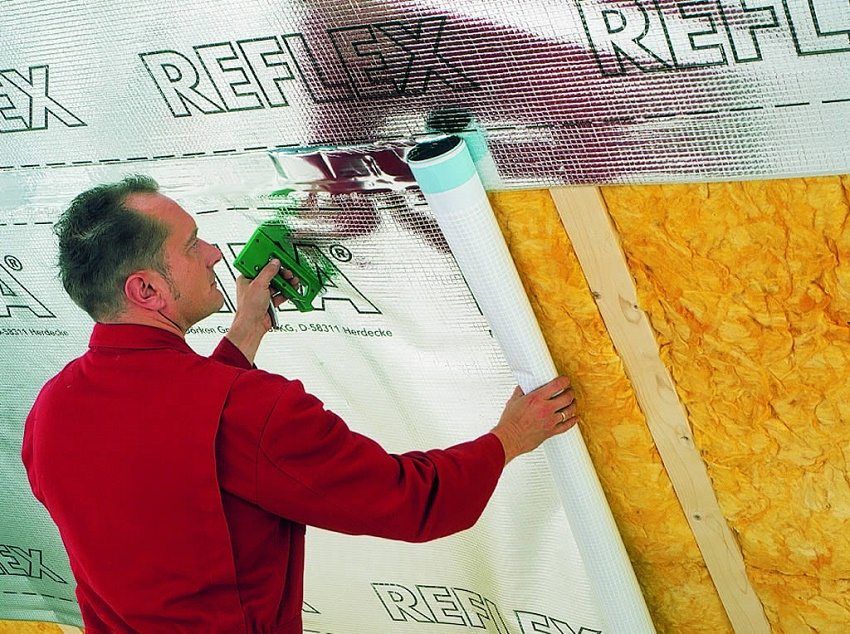 Recently, vapor barrier for wooden house walls is gaining popularity with izospan – high-quality vapor-permeable membranes and films with different strength and density. The simple and clear instructions contained in the instructions for use of the vapor barrier isostan make it easy to install them, even for an inexperienced builder. 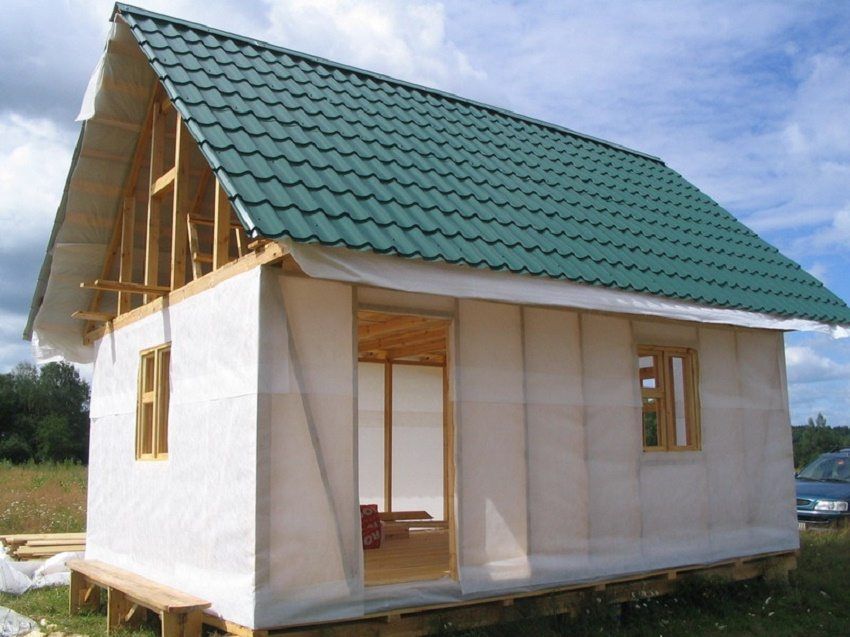 When laying the vapor barrier on the outer wall of the house of round logs, you can not leave the ventilation gaps. Their role is to perform the voids at the junction of the logs themselves. If the house is erected from a smooth bar with a square or rectangular section, then it is impossible to lay the vapor barrier layer directly on the tree. This will lead to impaired steam circulation. On the logs, it is necessary to fill the slats 2.5 cm thick with a step of 1 m. And only after that you can put a vapor barrier material, fixing it with a construction stapler. 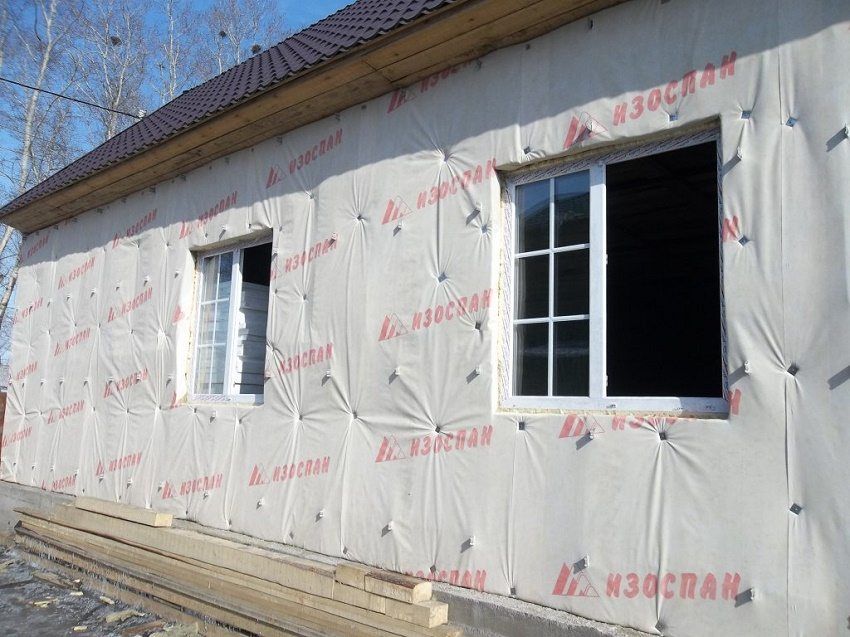 Then a crate is installed on which thermal insulation is placed, a waterproofing film is put on top, and finally, an external finishing is applied.

This option allows you to save a special microclimate in the room due to the fact that the tree inside the house is not hiding under the finish. It is suitable not only for log houses, but also for frame houses, it is distinguished by its sufficient simplicity, which allows vapor insulation of the walls outside the wooden house with your own hands. 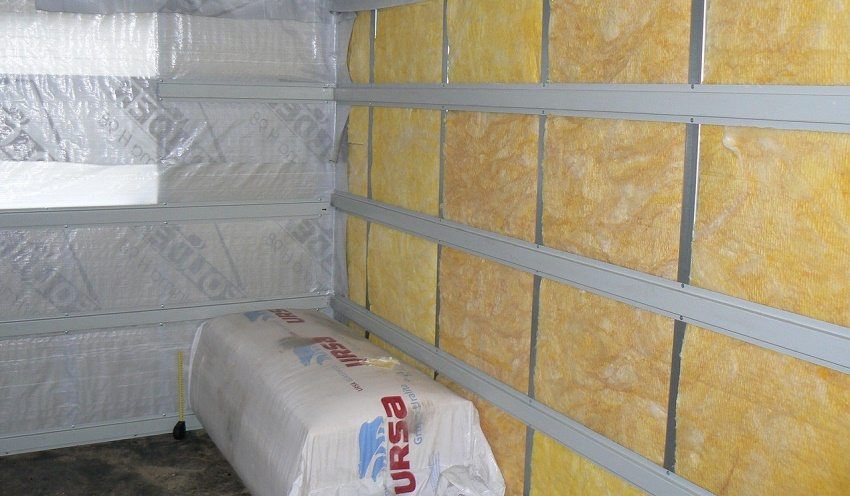 However, there are certain disadvantages. The wood must be completely dry, which may take more than one year. Therefore, this option is not very suitable for new buildings. In addition, the joints should be treated with sealant, the grooves prokonopat on both sides, and as a heater, you can use only hydrophobized materials. The service life of this design does not differ in durability.

There is also a way to install a vapor barrier for the walls of a wooden house from the inside. To this end, the walls are thoroughly cleaned and treated with an antiseptic composition. On top of the crate set of rails. Insulation is laid between the slats, and a vapor barrier is mounted on top of it. It is fastened with staples of a construction stapler or nails with wide caps.

If a diffusion membrane is used as a vapor barrier, it is placed directly on the insulation. Otherwise, it is necessary to leave a distance of about 5 cm between the insulation and the vapor barrier. The film must be well stretched, otherwise its protective properties will decrease. The lining is attached to the vapor barrier, and the finishing interior is applied to it. The distance between the skin and the film should not be less than 3 cm, otherwise the free circulation will be disturbed, and the moisture accumulated on the film will not evaporate.

There are several general rules that allow you to correctly select the necessary material and carry out its installation. 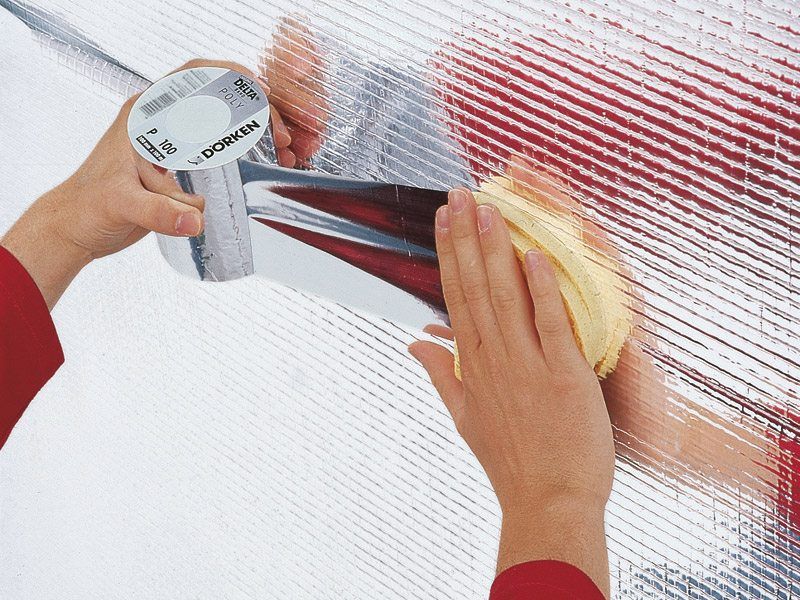 To prevent the ingress of moisture, the film is fixed with an overlap of at least 2 cm. It can be laid in several layers, but the total vapor barrier should not exceed 4 mm. Joints must be sealed with a special self-adhesive tape. If foil was used for vapor barrier, metallized adhesive tape is used. 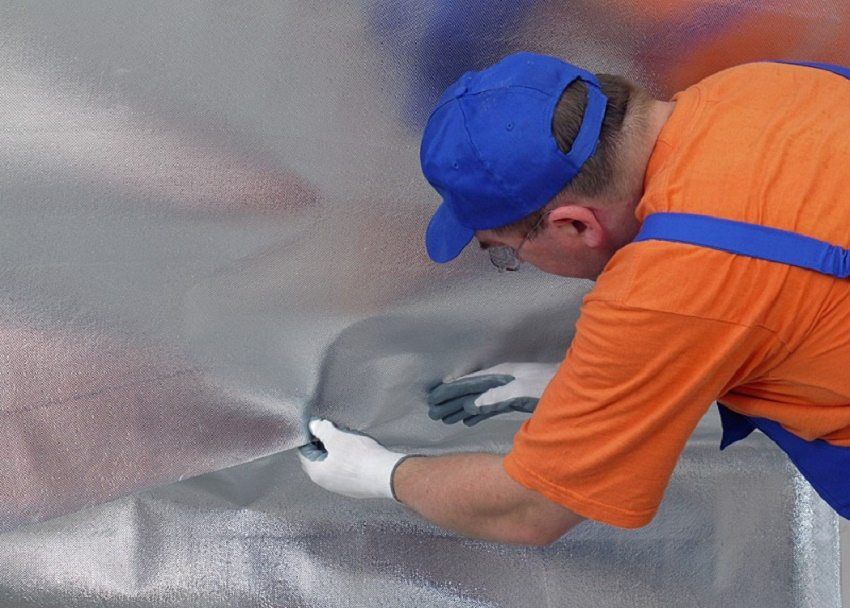 Thus, we figured out how important it is to prevent the formation of fungus, mold and excessive moisture in a wooden house. Vapor barrier for walls, provided competent arrangement, not only prolongs the life of the building, but also does not allow to spoil its aesthetic appearance.

Floating suspended ceilings – a novelty that has appeared recently, but immediately attracted the
A unique offer for you

Water filter under the sink, which is better: the rating of the most popular models

Thermal curtain on the front door: the key to creating a comfortable microclimate

How to cover the roof with a professional sheet yourself. Video and photo installation work

Wallpaper on the wall in the room: a catalog of modern design techniques

Pros and cons of self-leveling floors: reviews of the owners

Projects bath with a gazebo under one roof: the best ideas for implementation

Metal gutters for the roof: prices, features and installation features

Fences and fences for the house. Photo collection of brilliant ideas