Hygienic toilet bowl with faucet: the perfect alternative to the notorious bidet. Such an accessory for small bathrooms is almost the best way to carry out daily water hygiene procedures easily and quickly. Installing it is simple, it does not take up much space and eliminates the need for additional sanitary equipment in the bathroom. Given that the installation of such a device can be done in a hidden way, it will be appropriate for any style of the bathroom. 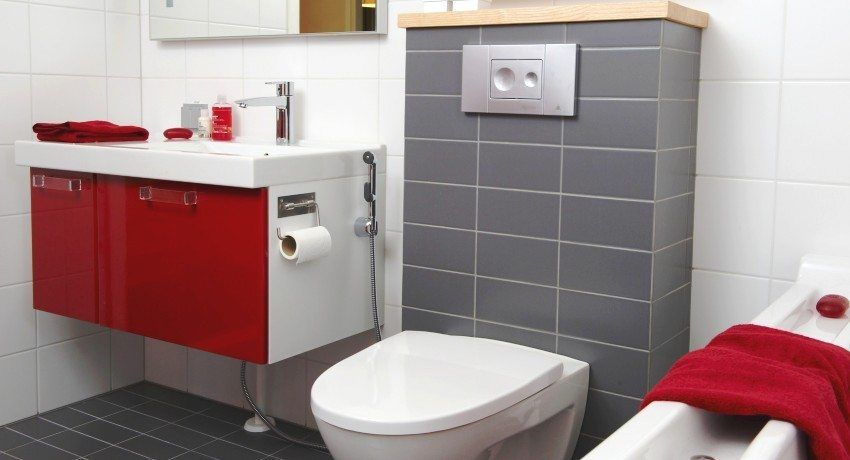 Hygienic shower for the toilet with a mixer: choose the optimal model

To create a comfortable environment for intimate hygiene, you can use a hygienic shower for the toilet. It is not difficult to acquire and install such a device, moreover, its price is quite democratic. It is worth getting acquainted with the existing types and models of wall mounted faucets with hygienic shower.

Manufacturers offer several varieties of compact devices for personal intimate hygiene. They differ in design and, accordingly, in cost. These are models built into the lid of the toilet bowl or directly into the toilet mounted on a wall or sink. 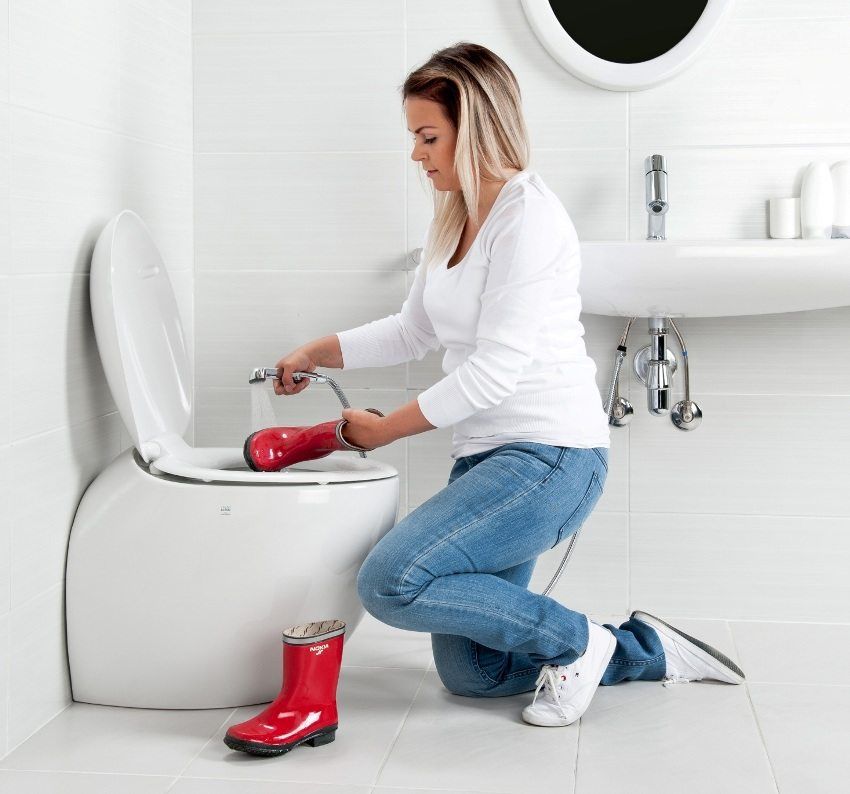 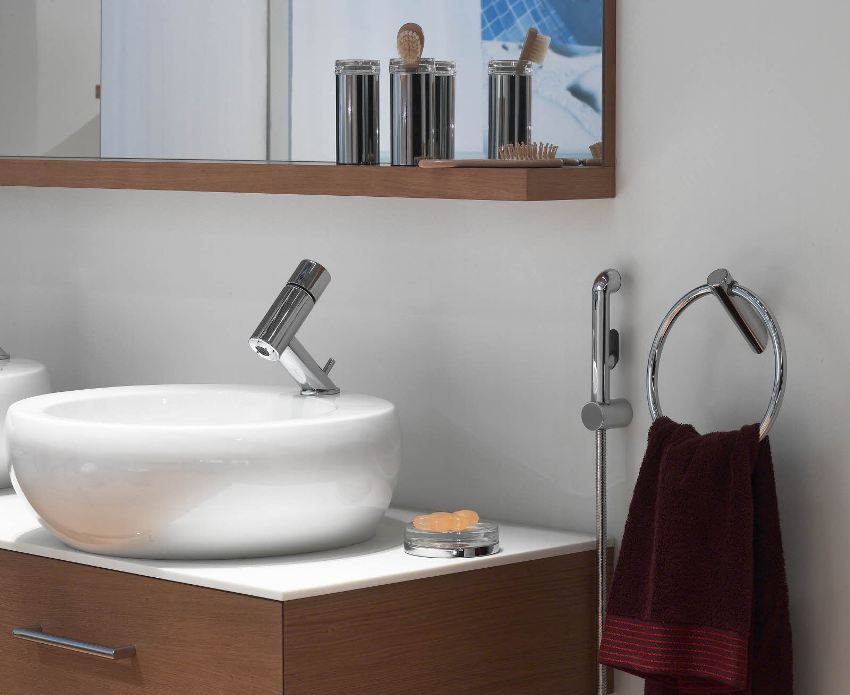 If the bathroom is equipped with a sink, it makes sense to purchase a sink mixer with a hygienic shower. The design of the hygienic shower in the toilet (photo to confirm) is somewhat different from the shower for the sink. First, the watering can itself is more compact, and the flow control is enclosed in a button on the watering can. Often, after carrying out the procedures, many turn off only the button, without blocking the mixer tap itself. In this case, the shower hose remains under pressure, which is fraught with undesirable consequences.

In the case when the hygienic shower is combined with a sink mixer, this will not happen, since, with the shower closed, water will flow through the mixer spout. In any case, leave the faucet tap open will not work. 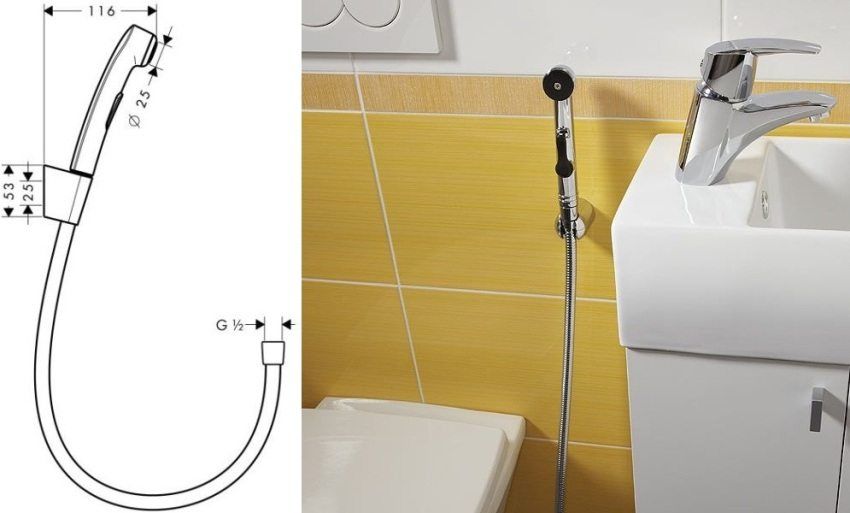 You can quickly turn the toilet in a bidet using a bidet mixer with a sanitary shower. Such a device is installed, as a rule, on the wall near the toilet. The model of the wall hygienic shower does not incorporate a spout, water is supplied by pressing the button on the shower head, with preliminary opening of the stop valve. Installation of the mixer is made at a convenient height for all family members. A towel holder and a dispenser for liquid soap are installed next to the watering can holder.

Wall mounted bidet mixers with hygienic shower can be installed in the combined bathroom or in the toilet room. The latter option allows you not to go to the bathroom to perform hygiene procedures. In addition, the presence of water supply in the toilet can significantly facilitate the cleaning of the bathroom, allow you to collect the necessary water capacity, rinse the children’s pot or wash off the main dirt from the shoes in the toilet. 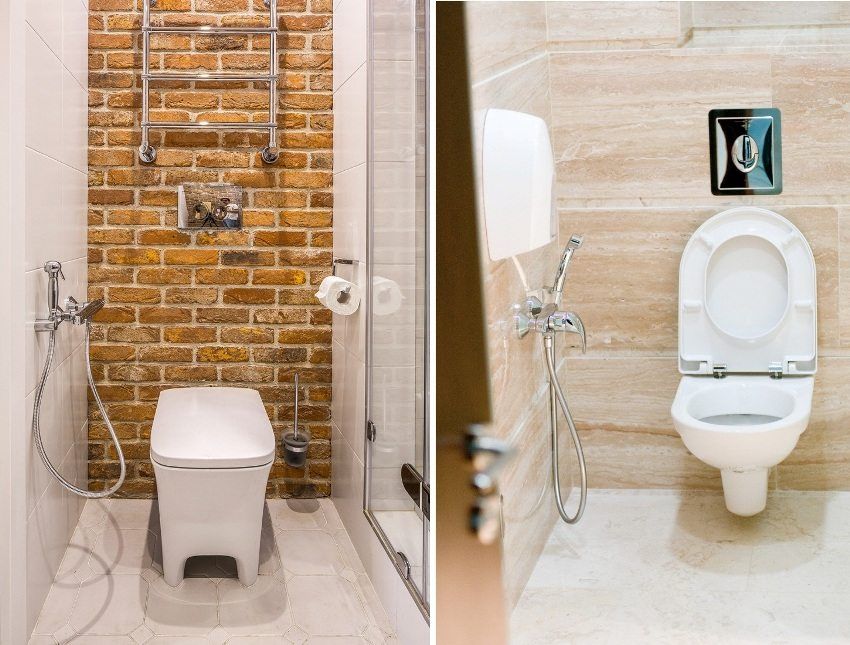 You can buy a faucet with a hygienic shower for a toilet bowl at a price ranging from 400 to 10,000 rubles. Inexpensive, but high-quality hygienic shower can be found in Russian manufacturers, as well as in some European companies. Models with a reasonable price can be found at the Czech company Lemark, the German company Grohe.

Preference is given to products of such manufacturers:

Helpful advice! To purchase your favorite model at a better price, stay tuned for discounts on the goods you are interested in online stores and on the official websites of manufacturers.

Shower holes are made of plastic or brass, flexible hose is made of metal or plastic. Taking into account the quality of the material and the price of the product. Models of hygienic shower are presented in different colors: chrome, gold, bronze, copper, the effect of aged metal, etc. It is possible to choose a hygienic shower of the corresponding color to suit any style of bathroom and toilet chosen by you.

Regardless of the differential pressure and temperature, the outlet water is provided with a comfortable temperature for making procedures. The thermostat is equipped with a limiter, which will not allow to supply too hot water to the shower. The thermostat is controlled by a button on its handle. The presence of check valves in the thermostat eliminates the possibility of mixing water.

Hygiene showers equipped with a thermostat will be a real boon for families with small children. You do not have to worry that the water at the right time will be too cold or hot. In addition, if the water from the water supply is not too warm, which is often observed in apartments with centralized hot water supply, it does not have to be lowered, waiting for a comfortable temperature. Accordingly, water consumption will be reduced in many respects. 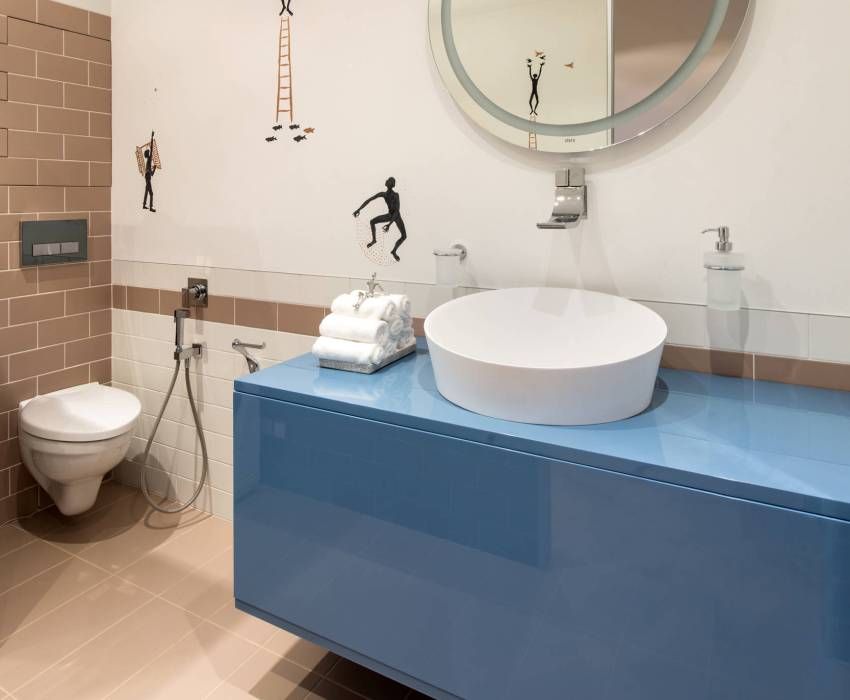 The cost of models with a thermostat is significantly higher, but it pays off with the degree of comfort in the care and personal hygiene.

Demand are products of the German brand Grohe.

According to the method of embedding, there is a toilet bidet and a lid bidet, each of these types has certain advantages and disadvantages.

Repair of a bathroom and a toilet, a photo of interesting decisions. Photos using a variety of finishing methods. The materials most suitable for the decoration of a modern bathroom and toilet.

A hygienic shower can be installed directly in the toilet. Such sanitary device has the definition of a toilet bidet. A water spray or retractable nozzle (nozzle) with a nozzle and a water supply tube for procedures is built into the design of the toilet bowl-bidet.

This option of installing a hygienic shower in the toilet is quite expensive, as it will have to purchase the entire set of plumbing. In addition to the price, there are some difficulties in the installation of sanitary equipment, as under it will have to bring a separate water and install the mixer. Sometimes the mixer comes with a plumbing fixture. 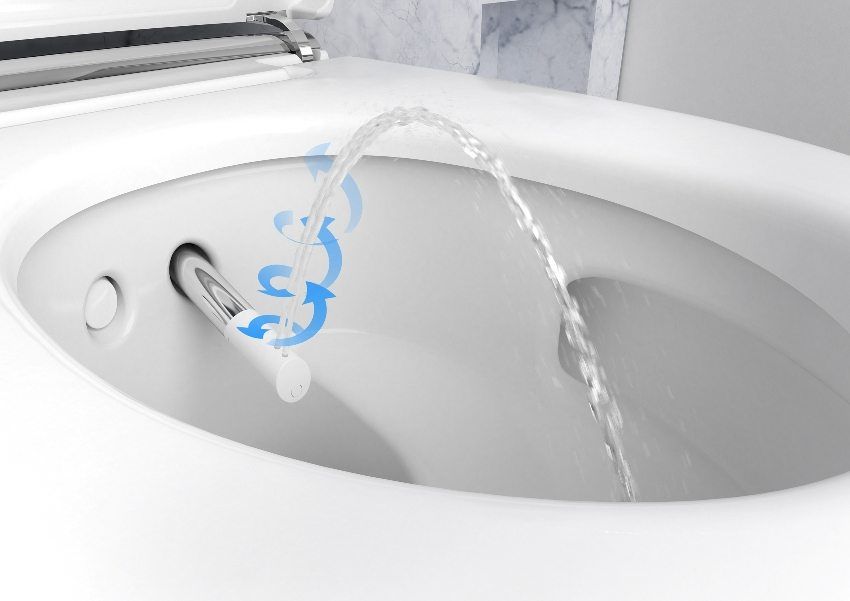 It is possible to purchase a toilet with a bidet function in a wide range of functions. Their price depends on the degree of functionality. Elite suspended toilet bowls can reach up to 400,000 rubles in their value. For those who can afford to get plumbing with an unsurpassed set of functions, it will fully justify its cost. 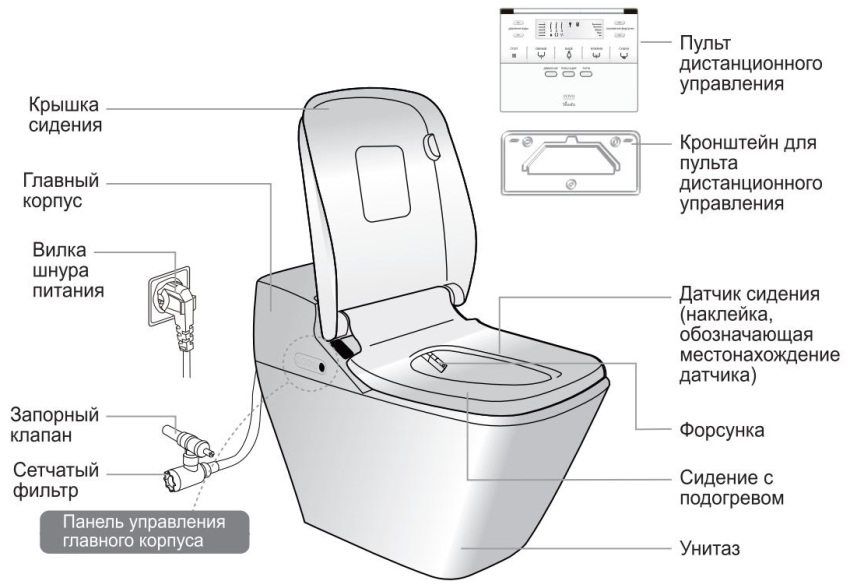 Today, in an effort to provide buyers with sanitary ware of an affordable class, manufacturers offer models of toilet bowls with a built-in bidet for 5000 rubles.

Available models of toilet bowls, bidet floor and wall. The most popular products are:

Some manufacturers produce toilets, bidet with built-in hairdryer, but the price of such models can reach 250,000 rubles.

A less expensive model of a hygienic shower in a toilet is a lid-bidet. In this model, the bidet function is built into the toilet seat cover. These are the most advanced systems with a set of several options: remote (from the remote control), electrical and mechanical control, built-in hairdryer, heated water supply.

Such bidet covers can be installed on almost any existing toilet, however, the demand for them is not so great, given the high cost of equipment. Given the remote control, such models are acceptable for installation in homes where people of old age or with disabilities live. Conducting procedures with the help of a hygienic shower for them will become more accessible, fast and convenient. 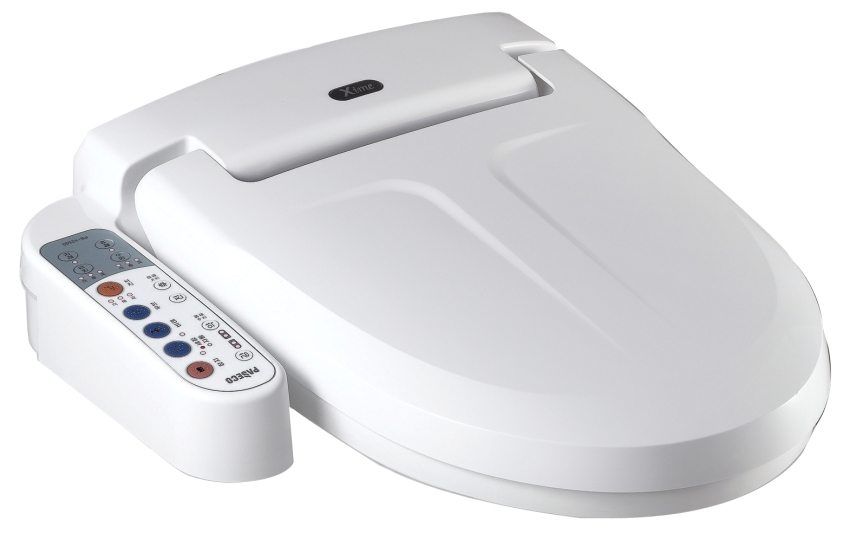 Materials for the manufacture of caps, bidets are used with antiseptic properties. The console is usually located on the side of the cover. The bidet cover features include the following options: 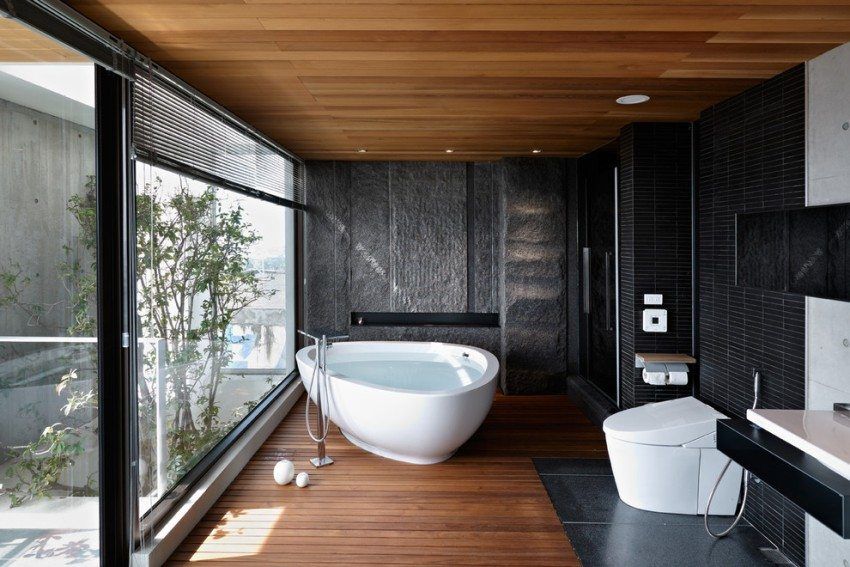 The Korean-Japanese company SATO is leading in the sale of lids-bidets, the price ranges from 14,000 to 55,000 rubles. The device is accompanied by a Russified instruction and a five-year warranty. 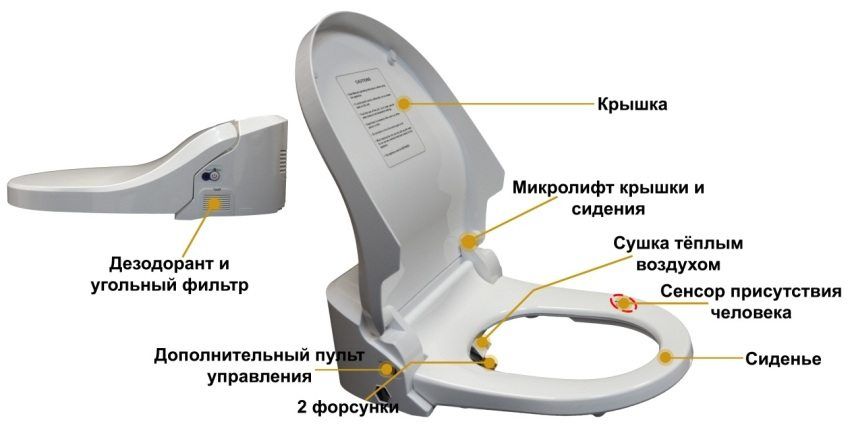 Along with a hygienic shower with a mixer of an outdoor installation, the developers offer models of the hidden type. Such devices combine aesthetics and functionality. Hidden installation allows you to disguise all unnecessary elements of the mixer, leaving in mind only aesthetically pleasing parts. The water mixing unit is built into the wall, and a hose, a watering can, and a decorative control panel are taken out of it. 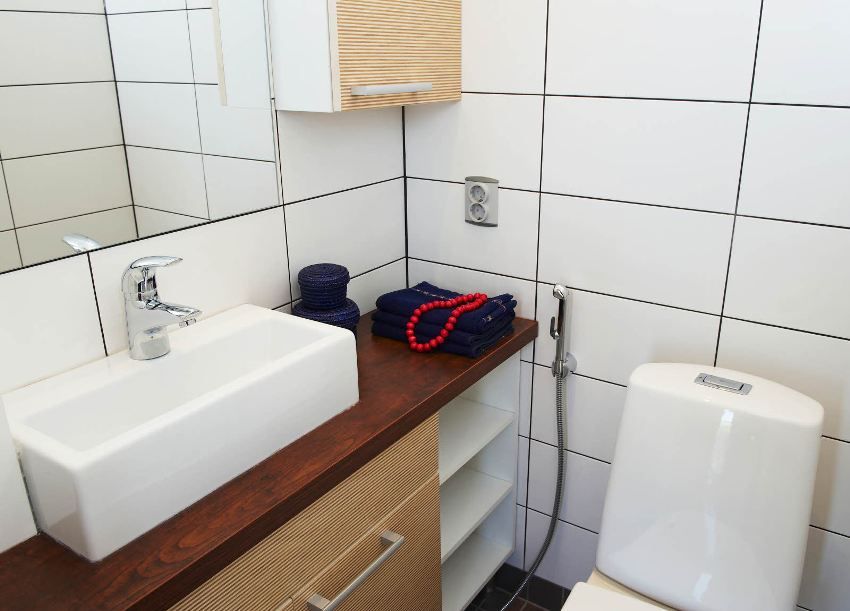 There are models of faucets for concealed hygienic shower with touch control. They can be contactless or driven by the slightest touch. Embedded products can also be equipped with a thermostat and adjustable water flow. Among the important functions of built-in hygienic shower models are: 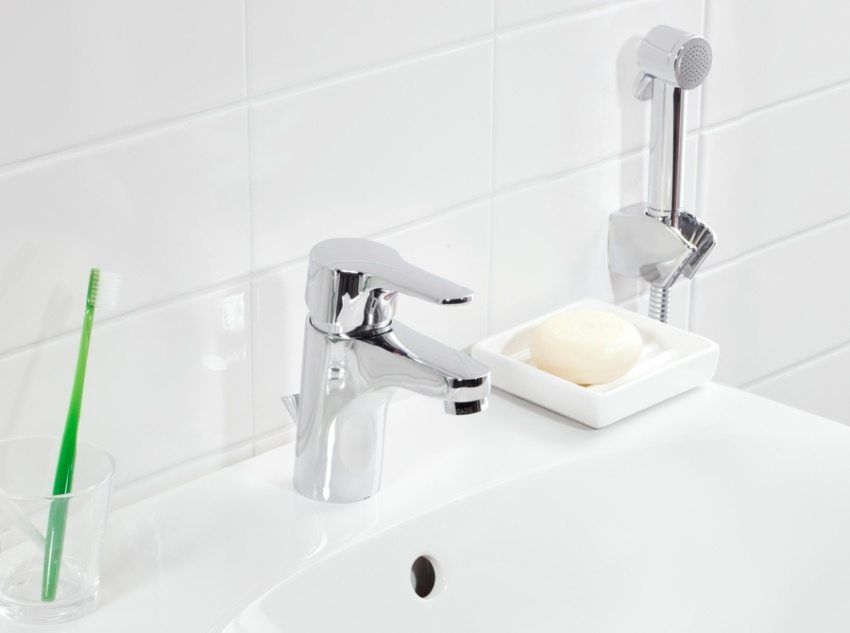 The range of flush-mounted mixers is represented by an exceptional collection of leading European brands: Jacob Delafon, Grohe, Hansgrohe, Nicolazzi, Ideal Standard, Kludi, Cezares, Roca, Fiore Axor. The splendor of the design, combined with rich functionality, makes it possible to choose the most suitable model from the products offered. Among the popular models are:

In addition to its functional qualities, the advantages of the hygienic shower include its easy installation. Its installation does not require special preparation or repair. Shower faucet is mounted to existing pipework. And you can connect in any convenient place for you.

If the bathroom has a sink, it is recommended to give preference to a hygienic shower for the sink. The principle of operation of such a mixer with a hygienic shower is the following: when the lever is opened, water enters the washbasin through the spout of the mixer and flows into the shower hose. But the shut-off valve does not allow water to flow from the watering can until you press the button on the shower watering can. As soon as water flows from the watering can, it stops pouring from the spout of the mixer. This principle of operation allows in any case to block the water after the procedures with the help of a lever. 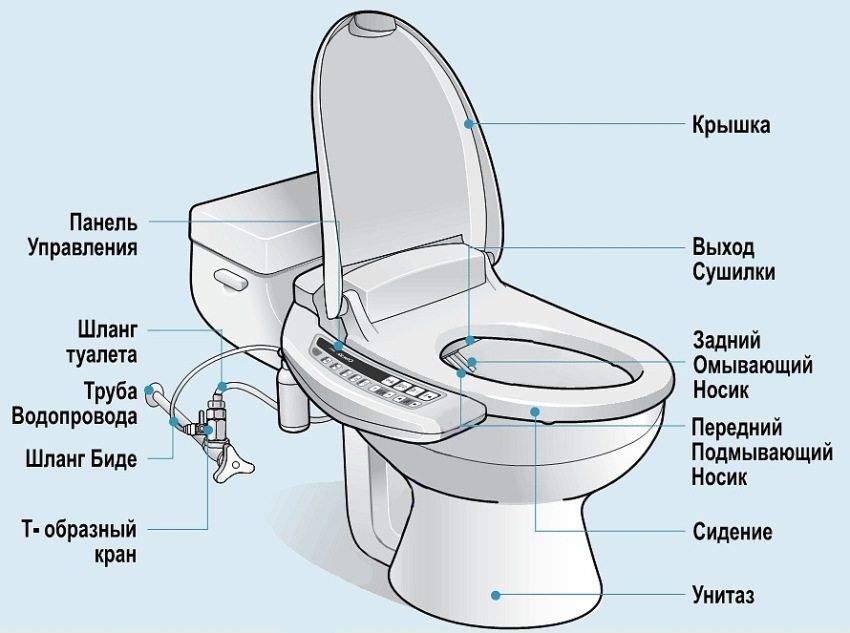 Helpful advice! When making an independent installation of a sanitary shower for a toilet, observe the correct position of the flexible hose so that it is not twisted and clamped by other devices. This will extend its life.

If there is no sink or the toilet is not combined with a bathroom, install a hygienic shower for the toilet. The watering can is mounted with the help of the holder on the wall to the right or to the left of the toilet bowl.

Installation of built-in models of faucets with a hygienic shower assumes the presence of hidden wiring pipes, for which it will be necessary to arrange a wall in the wall. Therefore, these models are recommended to install during the repair in the bathroom. To install, cut a niche in the wall where the invisible part of the mixer will be mounted, put pipes into the grooves and connect them to the mixer. Next, connect the hose with a watering can, the control lever displays on the visible part of the wall and cover with a decorative panel. 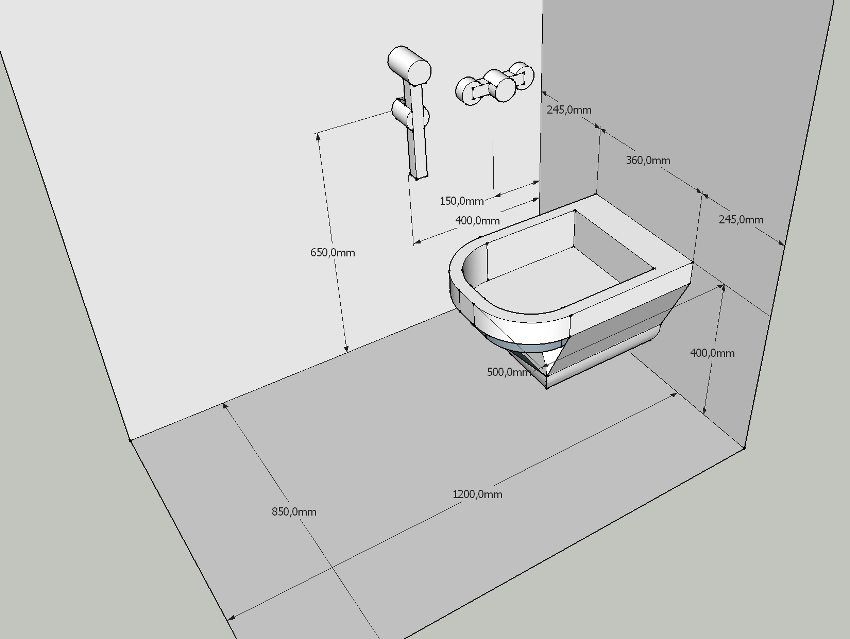 Faucets with hygienic shower for the toilet – a relatively young generation of sanitary fixtures, but quickly gained popularity among buyers. Incredibly easy to use and easy to install, hygienic showers will be a good addition to the bathroom of any style.

Build in pools for summer cottage – an ideal alternative to natural water bodies.

Irrigation system in the country: a variety of options for irrigating plants

Drainage pipes for groundwater abstraction: a complete classification of products
How to make tape drainage with your own hands?

Construction of baths in the country: video instructions and tips for building

Gardens for the lazy: photos and recommendations for creating a garden

Bar racks for the kitchen, photos of possible design options