The choice of a cooktop for the kitchen is a crucial undertaking, on which the efficiency of the cooking process and convenience in the use of the stove depend. Today, modern plates are presented in several versions, which differ in the principle of operation, functionality, appearance and price. When deciding which is better: induction or electric hob, it is important to explore the strengths and weaknesses of each option. 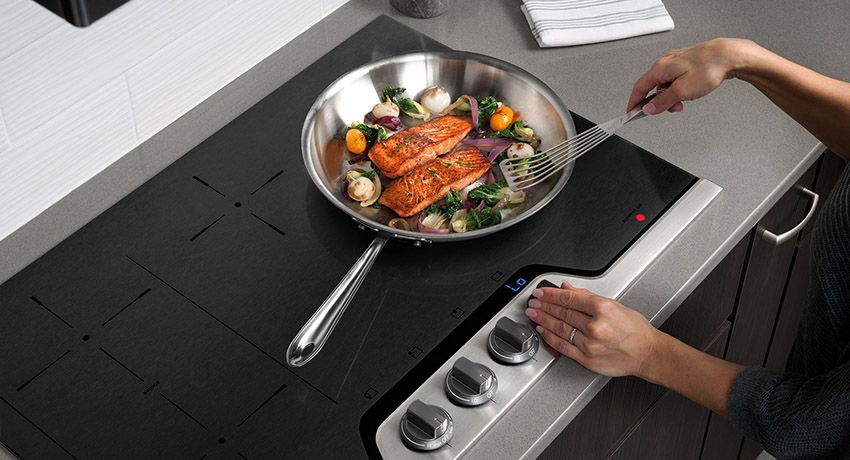 What is better: induction or electric stove, the pros and cons of products

To understand the question of how an induction cooker differs from an electric one, it is necessary to begin with a study of the principle of operation of each device. The electric device immediately heats the burner to the required temperature. Then the heat is transferred to the dishes installed in the work area. Heat is generated as a result of the passage of electric current through a conductor. 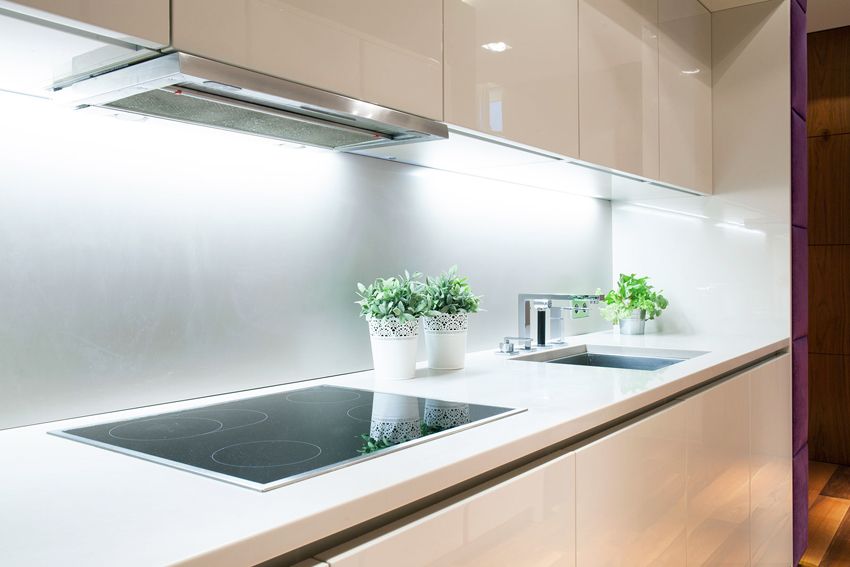 The latter is a resistive heating element, which is characterized by a high value of resistivity. The conductor is represented by a spiral, which can be located in the open form or be hidden under the hob.

Among the distinctive advantages of the electric stove are the following:

The disadvantages of the plate include: 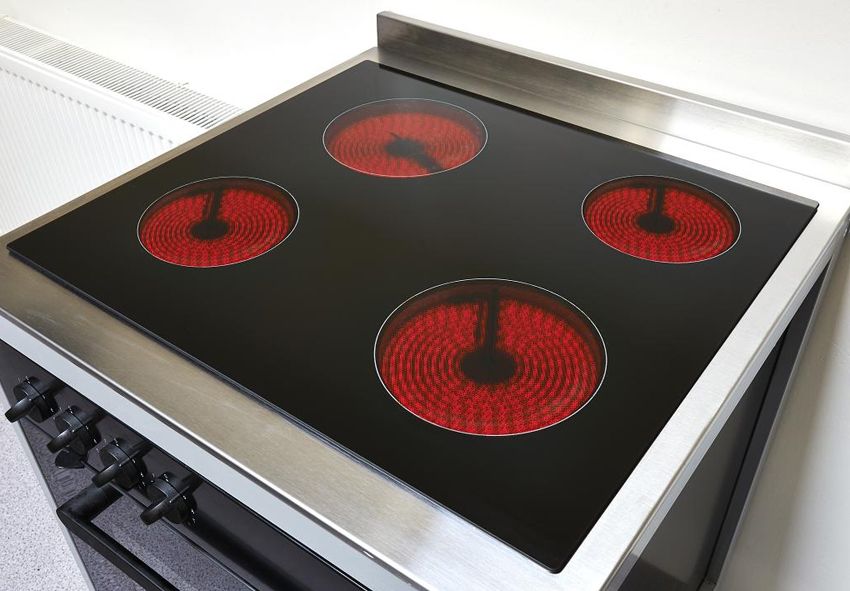 What does induction stove mean, it will become clear when studying the principle of its operation. It is based on the phenomenon of electromagnetic induction. At the moment the high-frequency current flows through an induction coil with a copper conductor winding, it is transformed to form an alternating electromagnetic field. At the time of installation on the working area of ​​dishes, which has ferromagnetic properties, the resulting physical phenomenon contributes to the movement of electrons located on the surface of the bottom of the product.

Thus, there is a process of heat, which is spent solely on heating dishes. The surface of the plate in this case remains cold. Due to the unique principle of operation, the induction panel has several advantages: 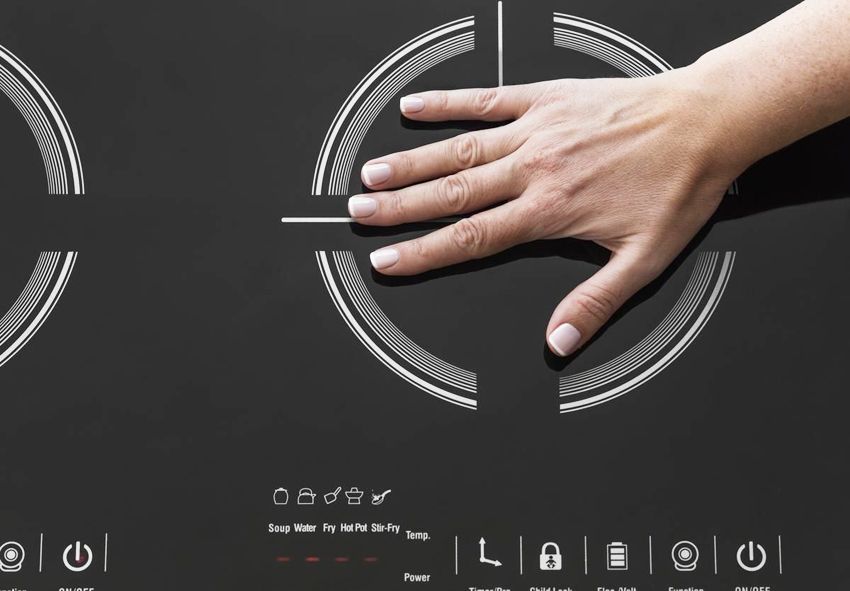 The disadvantages of the product include the following characteristics:

Important! While cooking on an induction cooker, remove all jewelry and watches. The first, heating, can burn the skin, the latter – are magnetized.

To decide which hob is better, it is necessary to consider the technical characteristics of each. An induction hob consists of an induction coil, a glass-ceramic surface, insulation, a control unit and a frequency converter. At the electric stove, cast iron pancakes, rapid, halogen or Hi-Light burners can act as heating elements. The first option is located on steel or enameled surfaces. The rest are hidden under the glass-ceramic panel.

The greatest efficiency is provided by halogen heating elements. The perfect tandem of the rapid spiral and halogen light bulb contributes to the rapid heating of the burner within a few seconds, which ensures maximum energy savings. 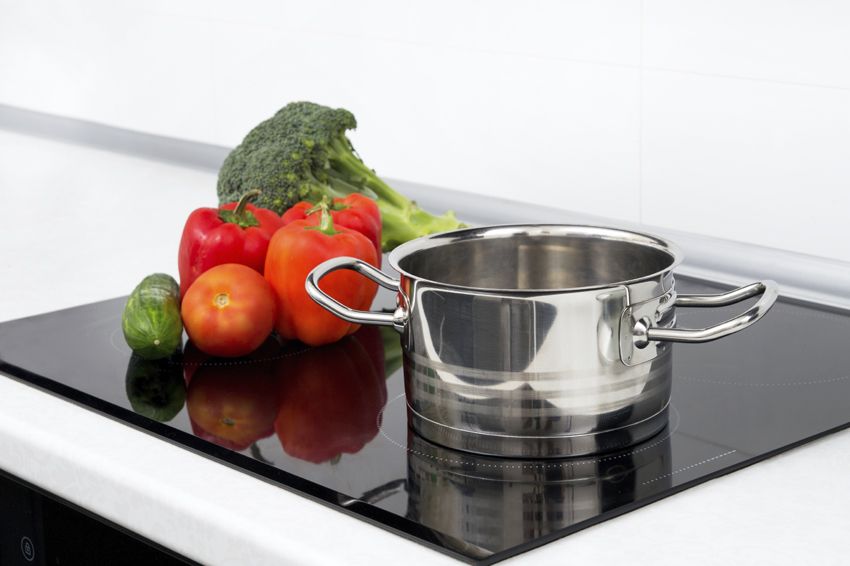 Induction panels are equipped with a glass-ceramic surface, which has strength and durability. However, it is not able to withstand a shock or strong mechanical effects. The surface of the electric stove can be made of glass-ceramic, stainless steel or be enameled. The last option is the cheapest. The surface can withstand various mechanical loads and exposure to high temperatures, does not require special care, but can be damaged by abrasive materials or cleaning compounds.

Good technical and operational properties has a stainless steel panel. However, it requires special care, which ensures an attractive appearance over a long period.

Glass-ceramic surface is the most popular option. It can be white or black. Original and stylish look panels with a pattern.

Before you choose an electric stove, you should decide on the parameters of the product. Induction and electrical panels can be standard or non-standard sizes, which allows you to embed the product in any kitchen set. The minimum width of products is 30 cm for the first version of the plate and 26 cm for the second. The shape of the induction plates are presented in the form of a rectangle or square, and the electric can also be made in the form of an oval, circle or semicircle. 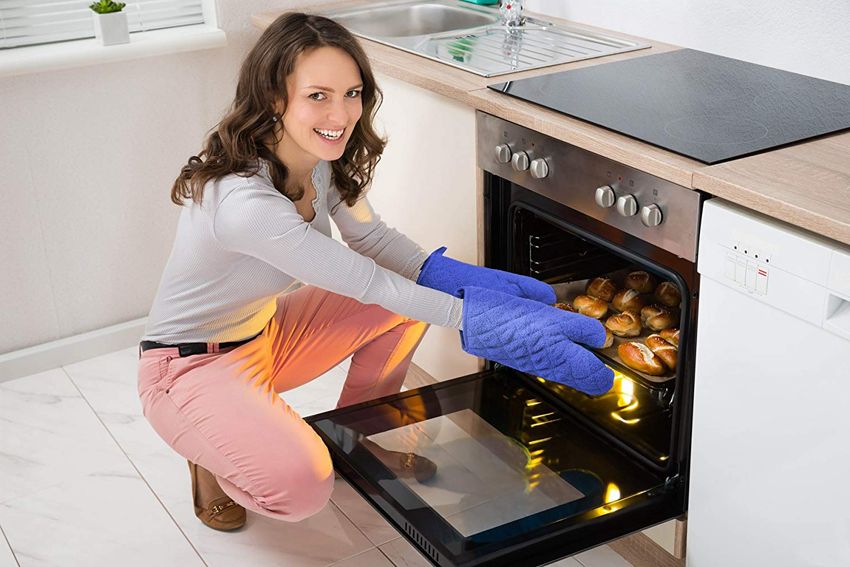 Electric and induction cookers are dependent and independent. The first option is associated with the oven, which should be located in close proximity to the surface. In electrical models, the panel control unit is located directly on the cabinet.

Choosing an induction or electric hob, you should pay attention to the number of burners device. The first type of surface can have from 1 to 6 rings of different diameter, which allows the use of different containers. The number of burners for electric models is 2-5 pcs. For plates with a glass-ceramic surface, the burners can be arranged in the same row in the form of a rhombus, square, triangle or semicircle.

The total power of the induction hob is in the range of 3-12 kW, electric – 3-10 kW. The operation of both types of plates can be touch or mechanical. The first option is more convenient. In addition, each burner can have an individual set of touch buttons.

To clarify the question of which stove is better: induction or electric, a comparison of the basic parameters of devices, such as: 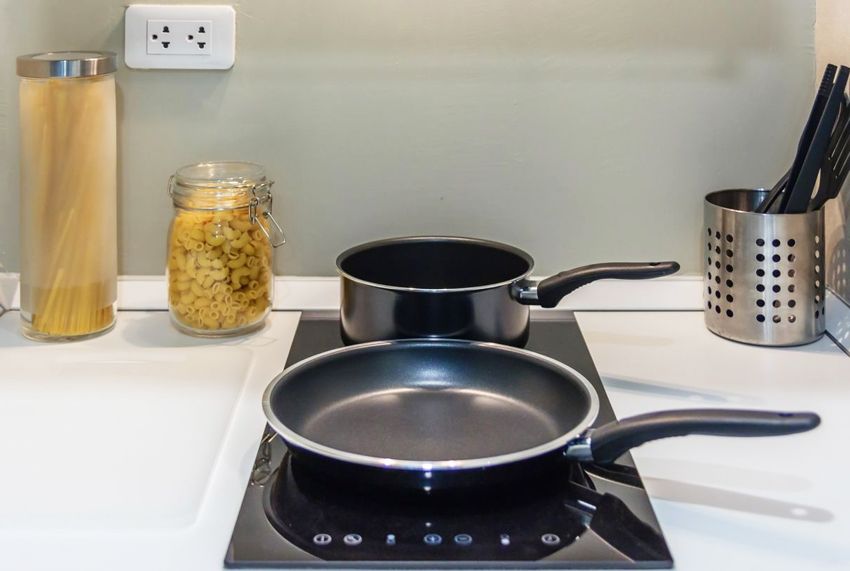 One of the main differences between an induction cooker and a glass-ceramic electric surface is the minimum power consumption. The first type of surface instantly heats up and quickly cools. Electric current is spent solely on the production of magnetic current in the induction coil. During temperature adjustment, it changes instantly. There is no need for a long wait until the hotplate heats up or cools down.

Induction hob is characterized by the highest level of efficiency, which is 90%. For comparison, it can be noted that this indicator for glass-ceramic electrical panel is 55%, for gas – 60%. 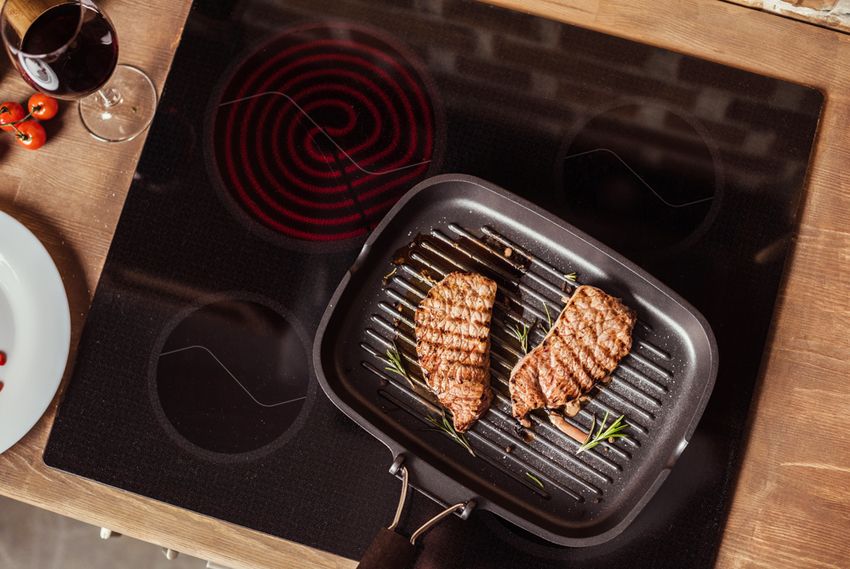 Considering the main differences between induction and electric cookers, it is necessary to mention the high speed of cooking on the induction surface, which greatly exceeds the capabilities of electric models. The heat generated is not consumed for heating the burner and the surface. It immediately leads to the heating of dishes.

To heat 1 liter of water on an induction panel will take 2-3 minutes. The ring in this case will reach a temperature of not more than 60 ° C. Electromagnetic currents are directed exclusively to food, which in this case is cooked several times faster. It will take about 5 minutes for the electric cooker to heat the hob, and another 10-13 minutes is necessary for the boiling water to boil. The temperature of the heating element can reach 400 ° C.

Answering the question, what is the difference between an induction cooking surface and an electric one, one cannot but note the high level of safety of the first one. The stove begins to work only when it is installed on its working area of ​​dishes, the diameter of which should occupy at least 70% of the burner area. After removing the element from the plate, it turns off. The surface remains cold, which eliminates the likelihood of a burn at the time of accidental contact with the panel. 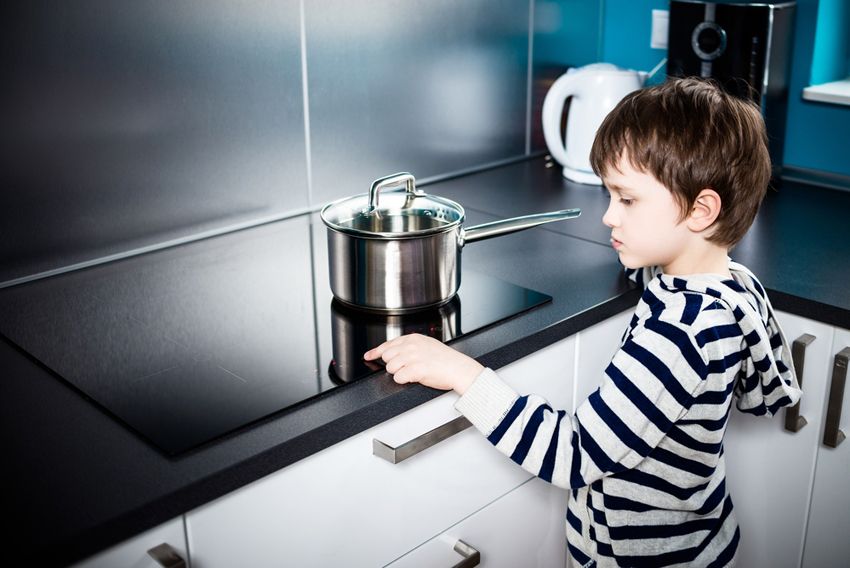 The electric hotplate begins to heat up immediately after it is turned on to a high temperature and then cools for a long time after the end of the work process. In this case, the risk of getting burned during involuntary contact with the surface increases several times.

Important! The induction panel will not work if you put a foreign object on it. Such a nuance is very relevant for families with small children.

Studying the difference between the induction and electrical panels in the issue of security, it is impossible not to mention that the first type of plate is equipped with an option to automatically turn off. This happens, for example, if the water in the pot boils and hits the surface. It will also turn off if the water in the pot has boiled away as the cooker recognizes an empty container. Such an opportunity will eliminate the damage to dishes.

On the other hand, only on an electric surface can a minimum temperature be set, thanks to which a dish can languish without user intervention. 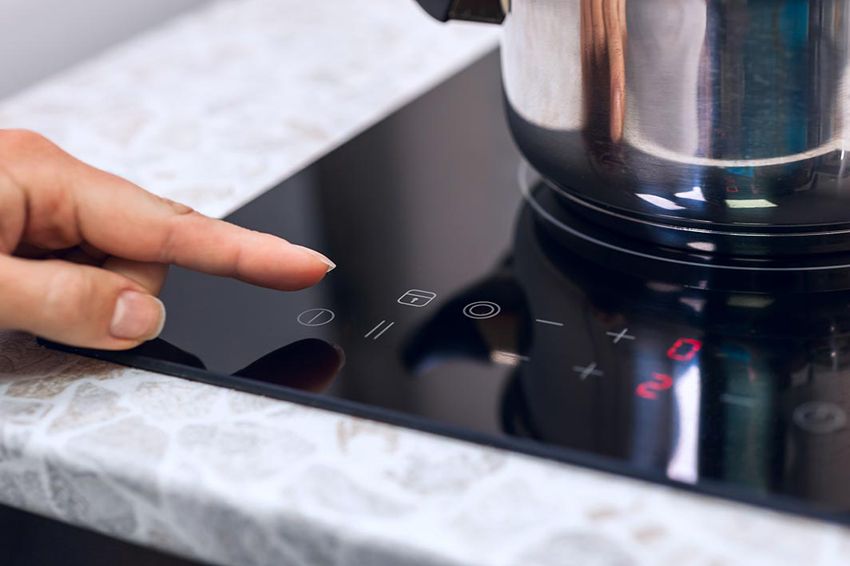 Considering the question of how the electric hob differs from an induction hob, one should pay attention to the silent operation of the first one. The second type of model during operation produces a specific noise. It arises as a result of the operation of fans, which are located near the induction burners and are aimed at cooling them. This feature may not like very sensitive people.

Choosing an induction or electrical panel, it is important to study the features of each option, which differ in the principle of operation, functionality and price. Induction hob provides more efficient operation with less energy. However, this surface requires special care, the use of special dishes and is characterized by high cost.

It is impossible to say which stove is better. If it was not possible to make a choice, you can give preference to the combined variant of the hob with electric and induction hobs.

Two-level ceilings for the living room of plasterboard, photo in the interior

How many boards in a cube: how to make calculations using various methods

The hatch under the pressure tile: how to choose the right model

Shed do-it-yourself: how to create a hozblok of simple materials

Hallway design: a photo of the interior of a small corridor

Rafter roof system: the main features of the frame