The owner of the garden will always have a place for a small garden with cucumbers. The delicate taste of fresh or lightly-salted crunchy vegetables grown on their own can not be compared with the taste bought in the store. There are many ways to grow cucumbers. Increase the yield and simplify the care of the plant will help trellis for cucumbers. This publication will introduce the options for the use of supports and methods of hand-made production. 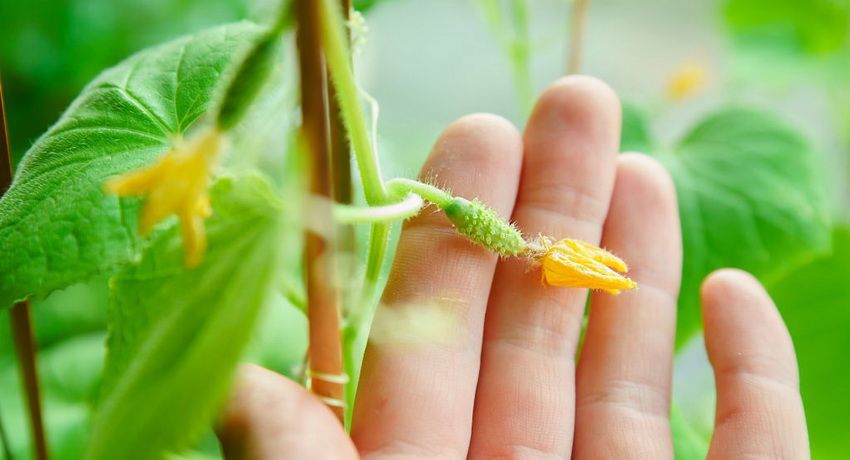 Tapestry for cucumbers at their summer cottage: features of use

Cucumbers are one of the most beloved and popular vegetable crops among the people. They are widely used both in fresh and in canned form.

Cucumber belongs to the family of pumpkin crops and can grow up to 2 m high, clinging to the antennae for everything that comes in the way. Most gardeners do not pay attention to this feature, considering that without a garter, it will be easier to care for the plant. In addition, there is an opinion that without a support the cucumber bush gets more moisture from the ground. 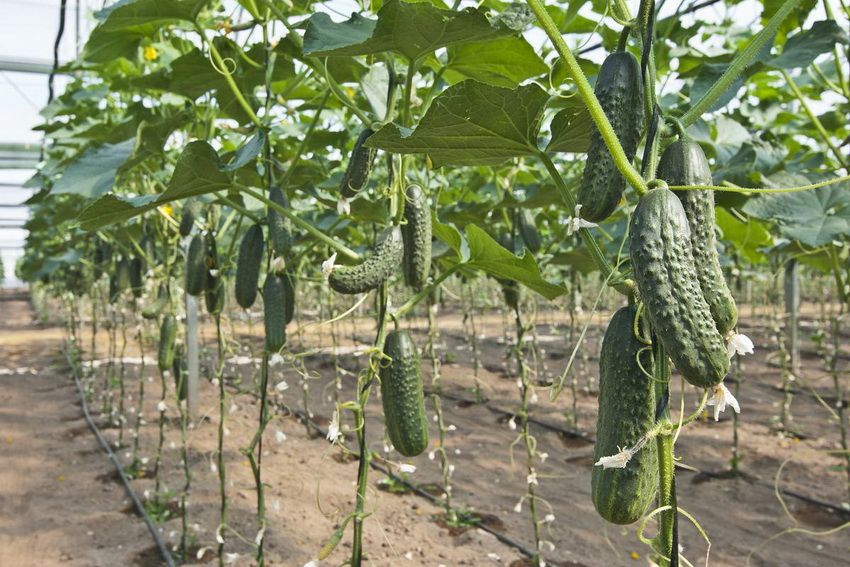 But cucumbers, which grow without a garter, are themselves trying to find support, as a result of which they break and dry. In addition, they begin to cling to neighboring plants, affecting their growth and development. Since this vegetable crop is a vine, the use of support is a prerequisite for the proper development of the plant. Garter cucumbers allows you to give them the maximum amount of sunlight, which increases the number of ovaries and accelerates the ripening of fruits. Therefore, the question of how to make a trellis for cucumbers, becomes very relevant.

Helpful advice! Using a trellis to make cucumbers with your own hands requires a minimum amount of space for garden beds in open ground or in a greenhouse. You can use such tapestries for tomatoes, peas, fragrant and green, as well as for other climbing plants.

The use of a trellis construction provides the plants with the maximum amount of light. Due to this, cucumbers will grow well and will surely delight with a bountiful harvest. In addition, under such conditions of development of vegetables have a uniform color. 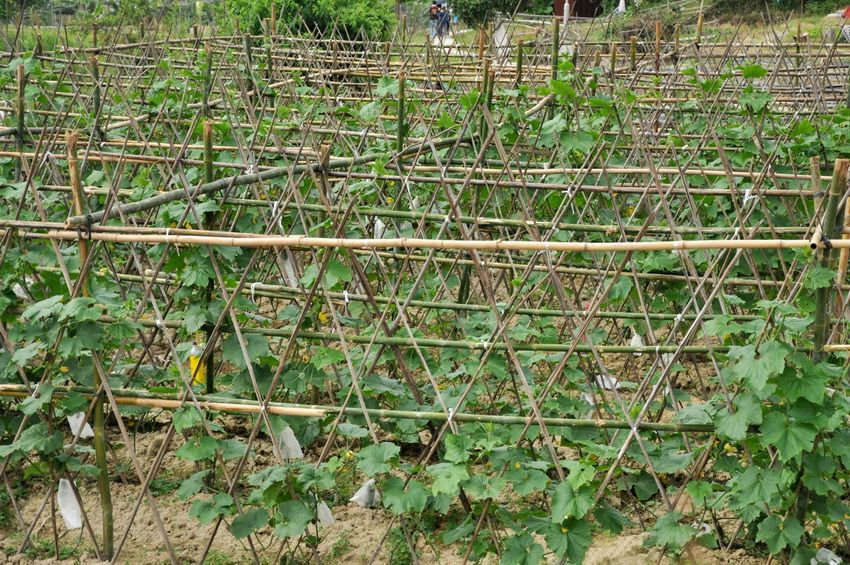 Growing cucumbers using a trellis is also characterized by other advantages:

To create a trellis for cucumbers in the open field or in the greenhouse will have to spend a little time and materials, but in the future this support will simplify the care of plants. 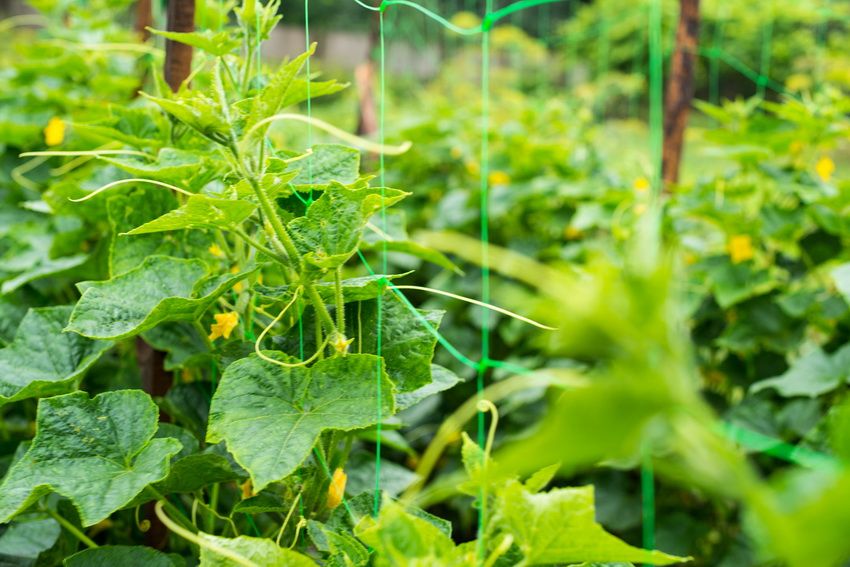 Helpful advice! In spring, the soil under the bed with cucumbers must be treated with boiling water. Such actions make it possible to eliminate all bacteria that did not die from frost, and to intensify the production of heat by manure and compost.

Tying cucumbers in open soil is especially important for proper plant development, because: 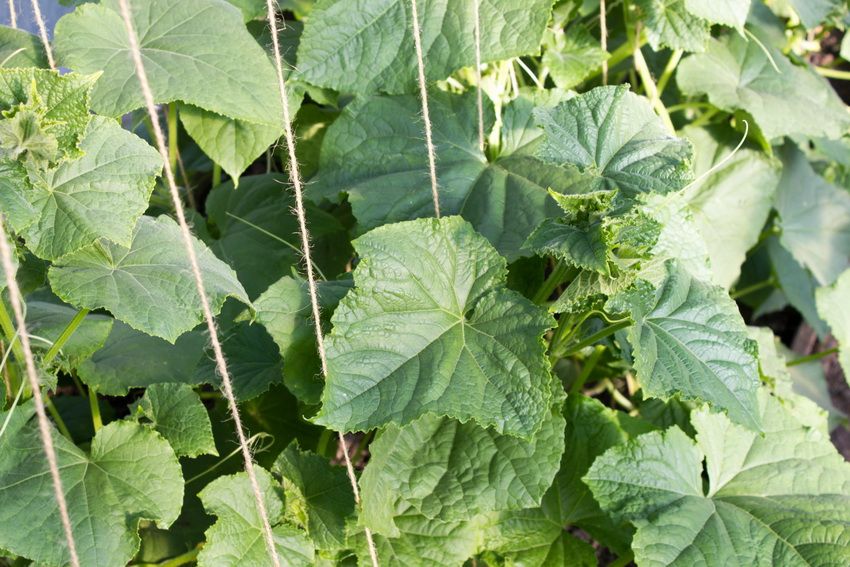 There are various ways of growing cucumbers on the trellis in the open field and in the greenhouse, yet they all give excellent results.

This is the easiest option, which is great for novice gardeners. For such a garter will need two pipes of metal or wooden columns. They should be placed on the edges of the bed. Between them, you need to tighten a strong twine, twine, wire or rope. The optimal distance between the strained rows should not exceed 25-30 cm.

Then you should carefully stretch the young cucumber sprouts towards the lower support and fix them on it. This support can be improved with vertical ropes, then the plant will be more comfortable to grow upwards.

Helpful advice! The horizontal garter of cucumbers has one single drawback: after reaching the upper plank, the plant stems will fall down and shade the bush itself. But this can be avoided if the support is made high enough or the stalks are too long to be cut. 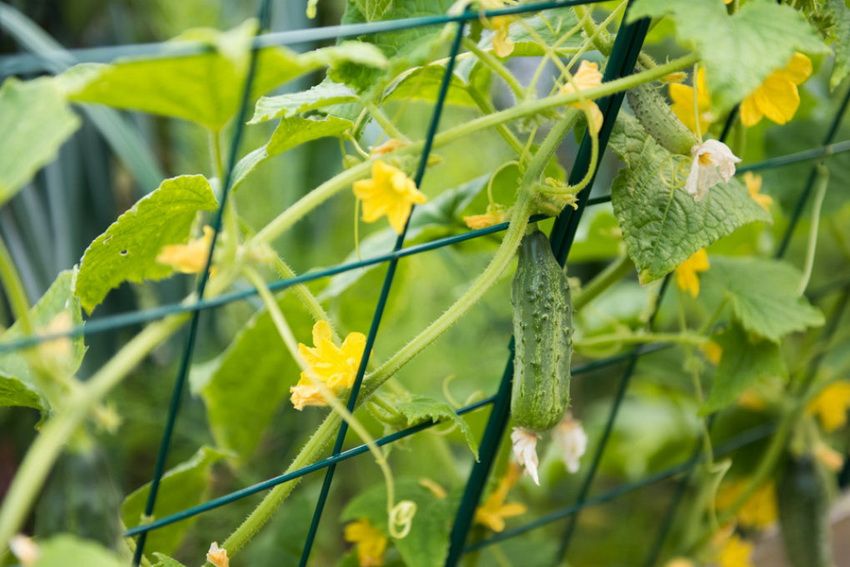 In this case, the two supports must be placed on opposite edges of the bed, and at the very top between them you need to stretch the rope. For the entire length of the tensioned cable, we tie 2-3 cm wide fabric strips and lower them down. Their number should be equal to the number of bushes that need support. Bottom end of the fabric tie the base of the cucumber.

As a result, the plant will independently cling to the support and reach up along it. This method makes it possible to locate a large number of cucumber bushes in a small area. Instead of cloth strips often use sticks installed near each plant. You can also make a triangle of three pillars, and between them pull the ropes and hang the support strips.

Grids for such a trellis for cucumbers can be bought in any store. They calmly replace both vertical and horizontal garter. Grids for climbing plants allow cucumbers to hang freely in the cells. In addition, the trellis of the grid can be decorated by any method: pull between two pillars, make the frame in the form of a triangle, a rectangle or arrange the beds on the site in another convenient way. 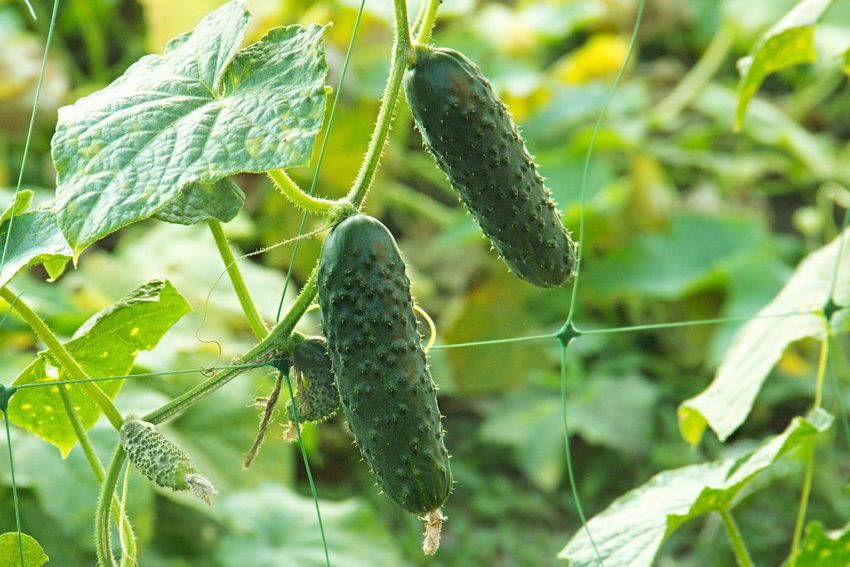 The design of the trellis consists of supporting posts and a grid. Racks can be made of metal pipes, wooden bars or concrete columns. For the formation of mesh weaving, you can use a rope, hemp twine or wire. Currently, special plastic mesh for the trellis is very popular. Such recognition is due to ease of installation and availability of material.

To install the structure, it is enough to buy a trellis for cucumbers in the online store and fix it with wire on the top of the posts. The lower edge of the support must be deepened into the ground and secured with the help of special wire hooks.

Such a tapestry is made and installed rather quickly and looks attractive. In addition, it is easy to make a trellis for tomatoes and cucumbers with your own hands.

Since cucumber is an unpretentious culture, even the cheapest plastic mesh is suitable for creating a trellis. The material looks like a fishing line made of durable polymer, which is difficult to break. 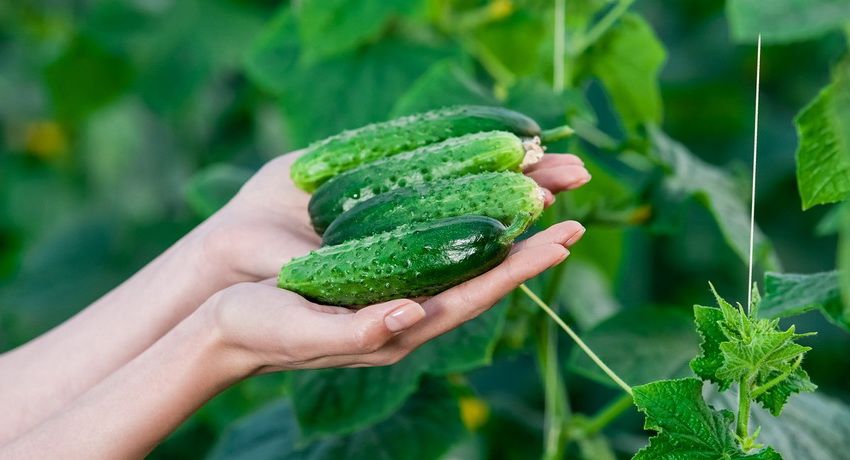 Polypropylene used for the production of trellis nets is resistant to mechanical deformations and external influences. The material does not rot, and its service life under the influence of the sun is about seven years. Gratings for supports in standard green color are made.

The mesh of the grid is quite large, 150-170 mm, and the edge is so thin that it is visually imperceptible. At the same time, the material is capable of maintaining high quality cucumber stalks with fruits. This net is suitable for growing not only cucumbers, but also other annual crops: tomatoes, zucchini, green and sweet peas, beans.

The technique of using mesh for cucumber trellis is simple: 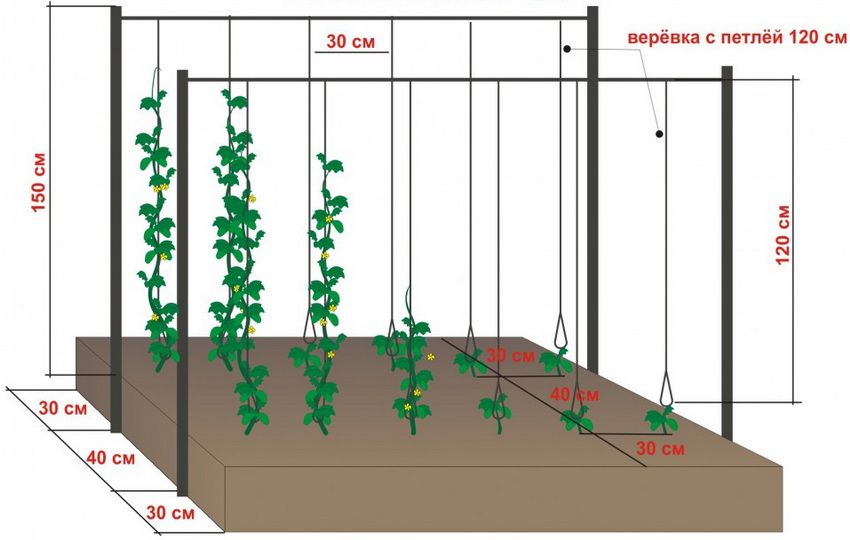 When cucumbers grow to a fruiting period, they will be securely fixed on the trellis. With sufficient watering, the bushes will give a bountiful harvest.

It is imperative to tie cucumbers in the greenhouse, although many believe that plants are reliably protected by the material of the greenhouse. Thanks to the garter, cucumbers get more sunlight, which is especially important in greenhouse conditions.

In addition, with the antennae the plants cling to each other and form glomeruli. In these interweaving a mold is made, and the bushes begin to rot. You can avoid this by separating the plants. The garter allows you to better develop the side branches, which are placed on female flowers. This arrangement allows you to increase the yield of bushes.

For a garter in a greenhouse, the same methods are suitable as for plants on the street: horizontal, vertical and using a grid. Equally effective is the formation of plants in a combined way. 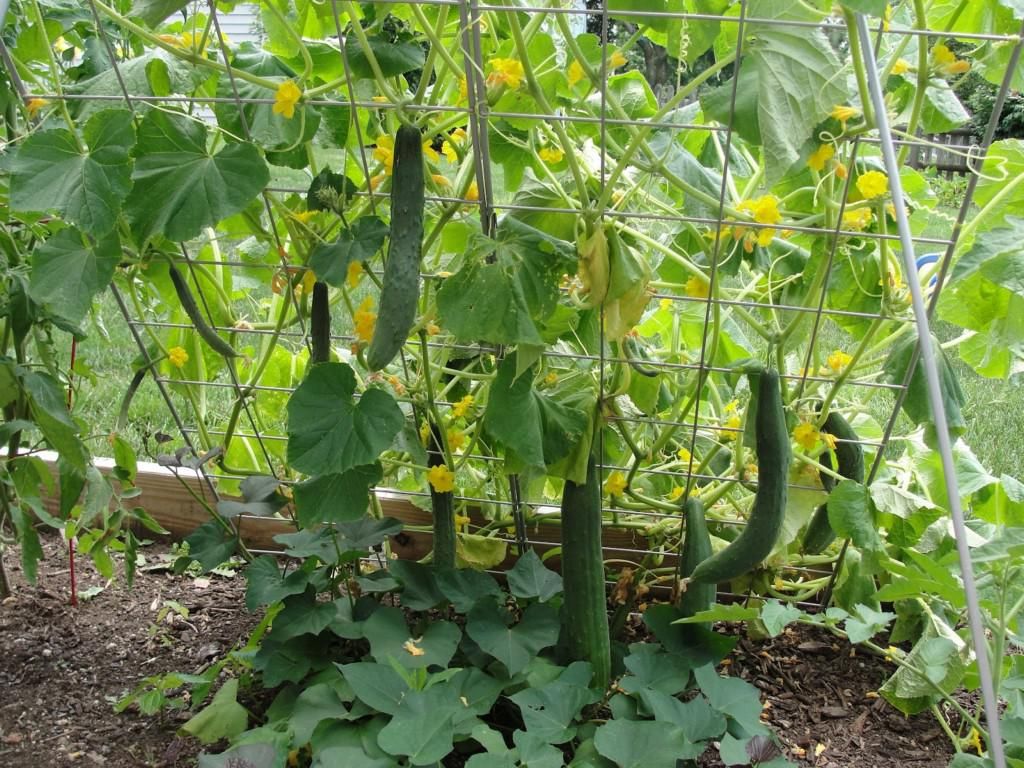 The method of blinding cucumbers. Experienced gardeners believe that the plant should not grow uncontrollably in height and width. To do this, the main stem must be tied to a vertical support, and then remove all lateral shoots and antennae, which are above 50 cm from the ground. Due to this, the cucumber will direct all forces to the setting of fruits on the main stem. The bush itself will be less sick and will not be able to block the neighboring shoots. You need to tie the plant under the second sheet.

The technique of growing fruit crops using trellis is very convenient and effective. Plants placed and secured vertically occupy much less space in the garden and rarely break.

Translated from the French word “trellis” means “shoulder” or “support.” At first, such support structures were used exclusively for decorative purposes for flowering crops. Over time, the trellis began to be used in agriculture. Do-it-yourself photo trellis for peas, cucumbers, tomatoes and other crops can be found on the Internet with a detailed description of their creation.

Sink for kitchen from stainless steel is considered along with a plate for cooking,
A unique offer for you

Baths for the bathroom: types, characteristics and photos

Wallpaper in the hall in the apartment: photo ideas to create the original interior

Interior doors with glass: an original and functional solution

Beautiful beds in the country with their own hands: photo examples and unusual decisions

Vinyl wallpaper on non-woven base. How to glue correctly?

Electrical wiring in a wooden house with their own hands. Step by step procedure