In order to build garden paths on your summer cottage with your own hands at low cost, you need to figure out what materials it is best to do. Landscaping involves many ways to build garden tremors. The style and choice of type of material depends on the design, which is selected in general for the site. Regardless of the choice of material for the tracks, they should ideally fit into the panorama of your “estate” and not burden it with excessive expensiveness. 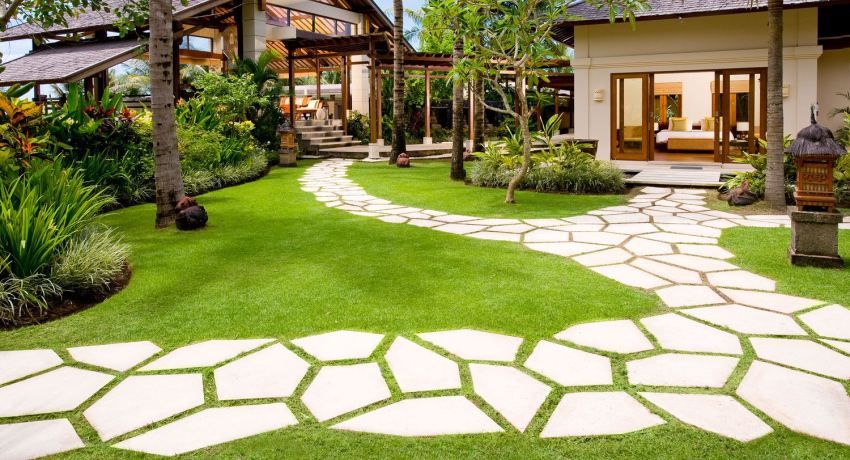 What are the types of garden paths

There are three main destination tracks on the summer cottage: 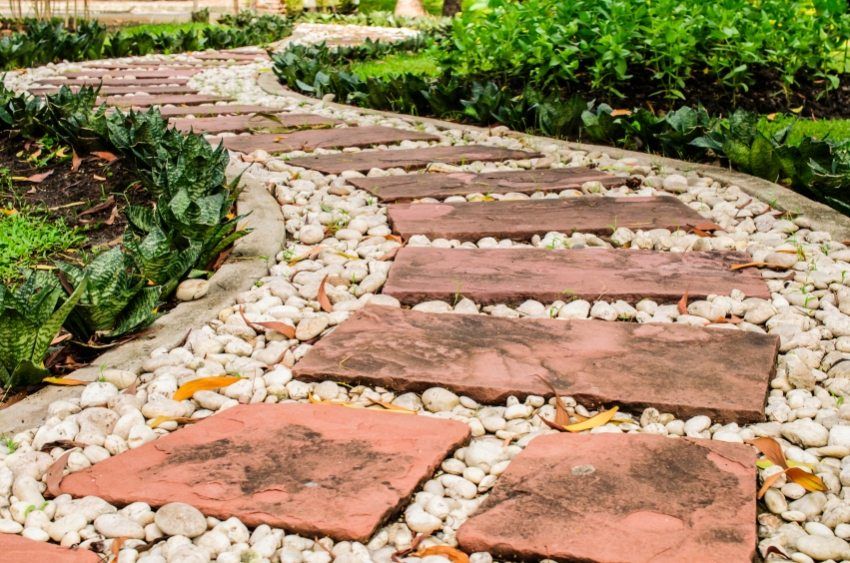 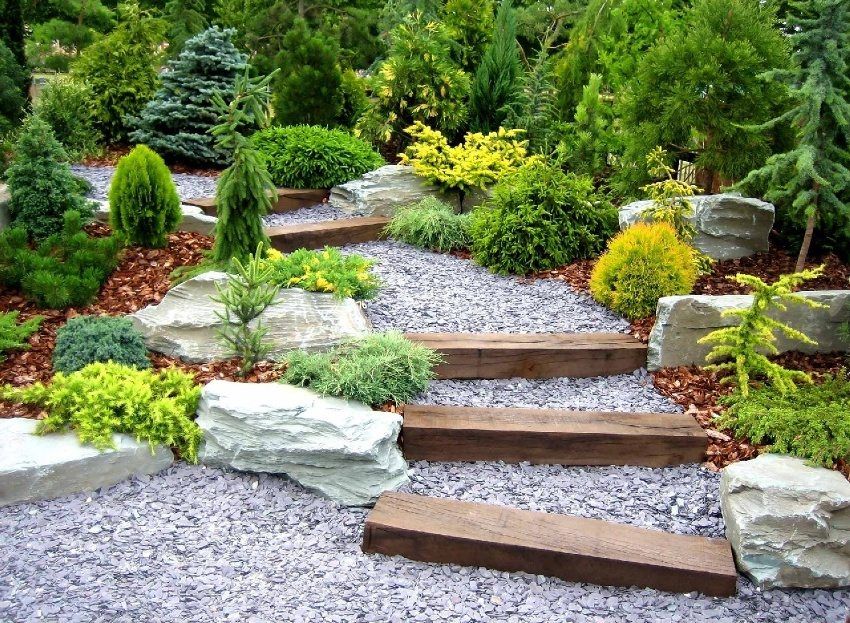 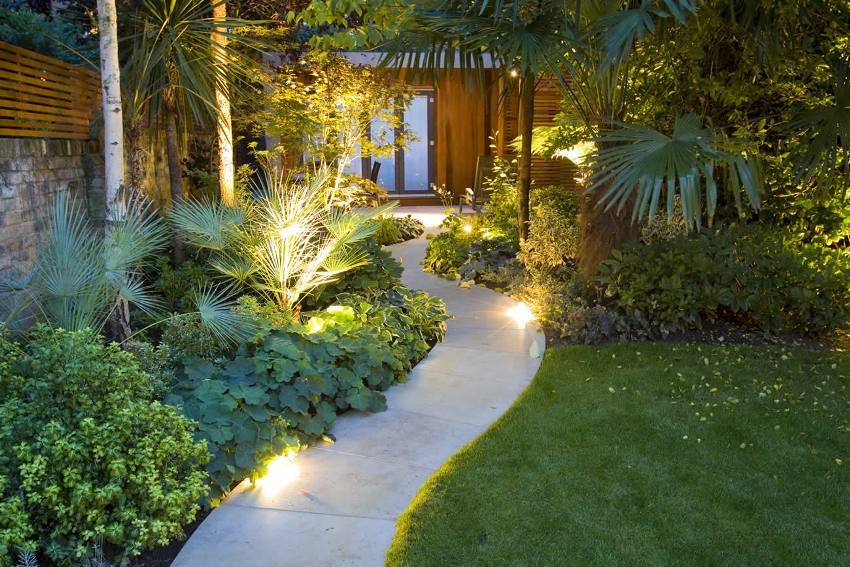 There are quite practical and durable materials that have an aesthetic appearance and expensive design: paving stones, natural stone, clinker or rubber tiles and others. All this is very good and beautiful. However, most people want on their piece of land to make garden paths with their own hands at low cost. What kinds of materials are better for this, read on. 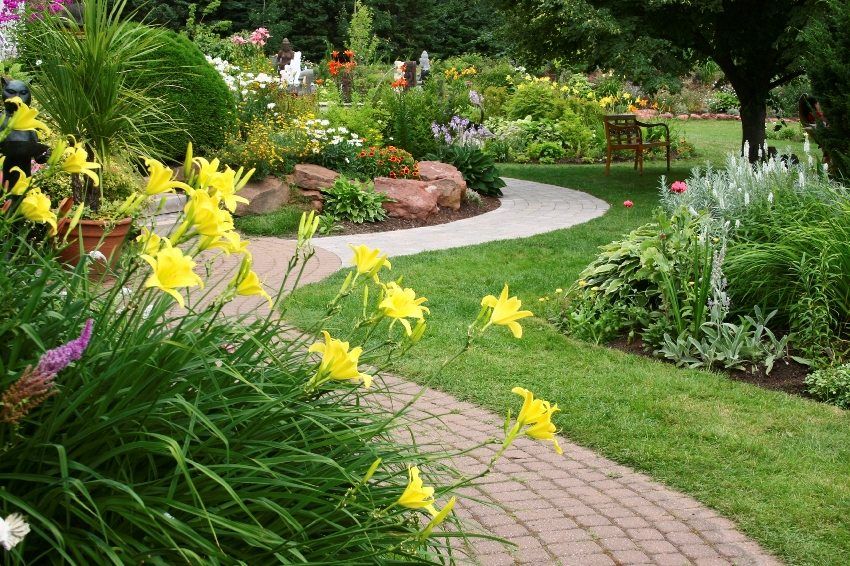 Helpful advice! If the choice of material for garden paths is guided only by the economic component, you can build an object that does not serve the season. Therefore, we must always measure the feasibility and cost. For example, it is impractical to lay tracks from plastic bottles where there is heavy traffic.

When conducting even a superficial analysis of the cost of certain types of materials from which it is customary to make garden paths, it can be concluded that the tracks of marble chips, crushed stone and gravel are considered the cheapest and most practical. It is not difficult to create them, and the performance will not disappoint anyone. 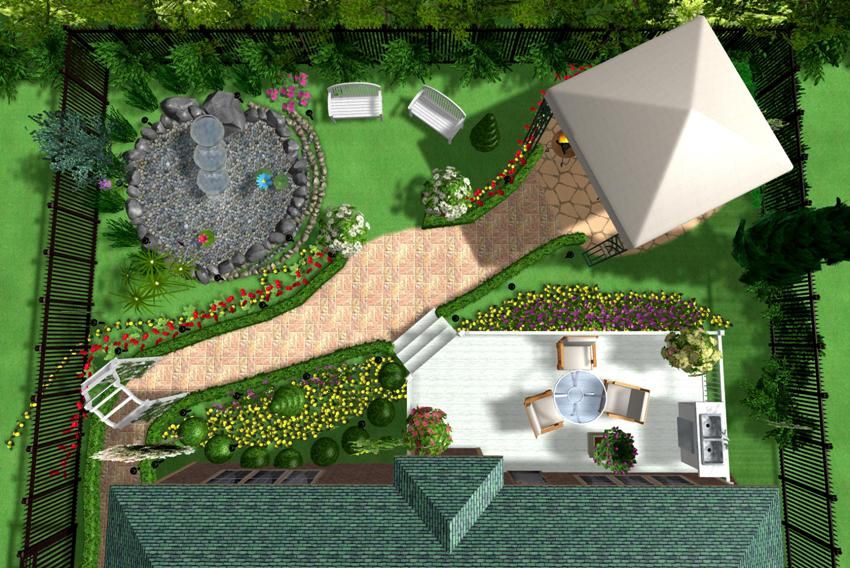 Brick, both solid and broken can be successfully used for the budgetary construction of tracks on the site. Well, if you do not need to specifically buy for this purpose. Perhaps he stayed when disassembling an old furnace or some kind of structure. Wooden hemp is an original and low-cost method of laying garden paths. The same can be said about plastic bottles, which can be collected as much as you like. 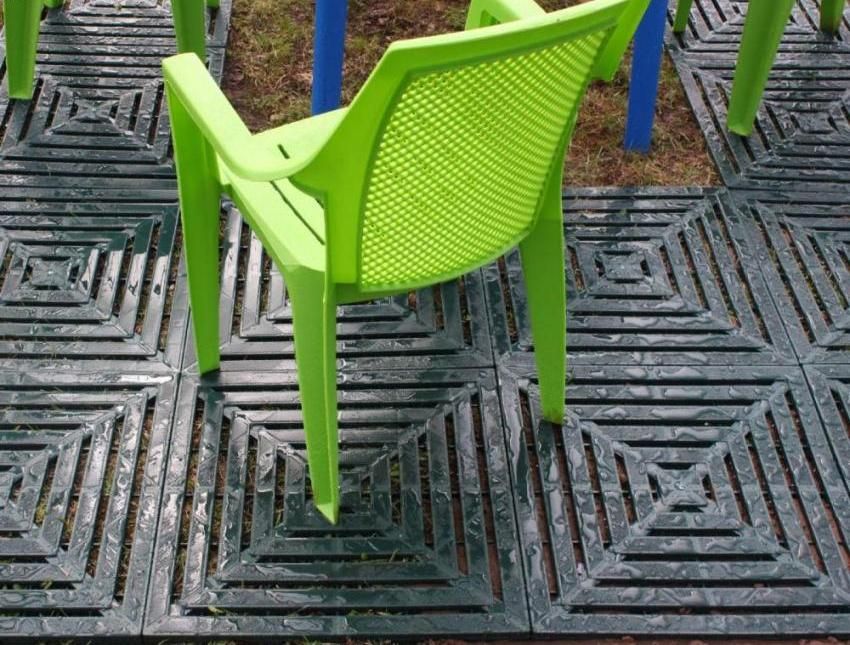 The next material, which does not require high costs for installation, is concrete. It is strong enough, practical and durable. If to apply dyes, then from it it is possible to make tracks worthy of attention. Moreover, since then, various forms for the manufacture of garden paths have appeared on the market.

Geotextiles: what it is and how it is used in construction. Types of geotextiles and their features, advantages of use, installation. How does the density of geotextiles in its application.

Debris is not expensive, especially in places where it is abundant in nature itself. Therefore, the construction of the tracks from it can be attributed to low-cost forms. We will understand how to pave a path of rubble or gravel. It is not at all difficult to do. Before you begin, you need to stock up with the right amount of detrital material, sand and cement. Crushed stone, gravel, stone chips and even fragments of bricks will do. 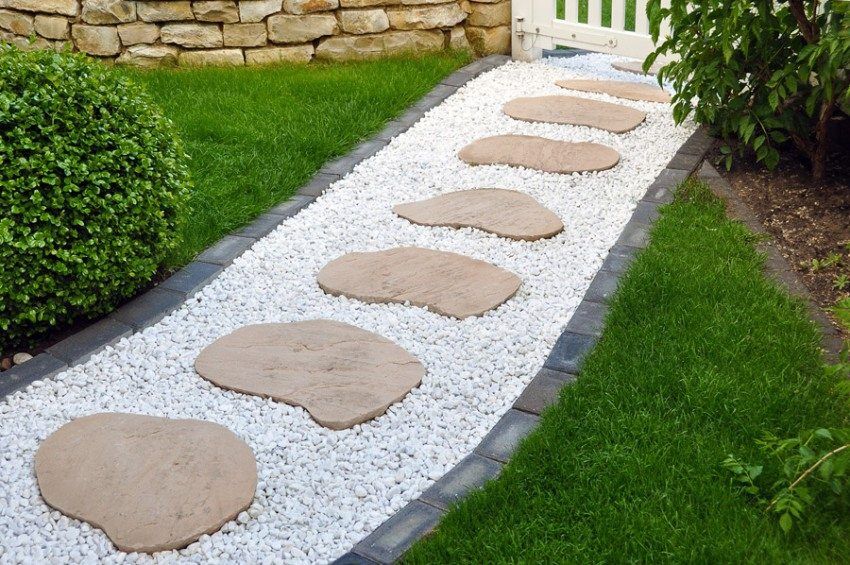 On the site you need to mark the contours of the future track. If your garden is arranged in a classic style, then the paths should be straight and use curbs better. Landscape style, on the contrary, assumes curvilinear forms with a natural circumvention of obstacles. Along the whole contour, the soil and the sod are excavated to a solid base. From the depth of the resulting trench depends on the amount of material that will be needed to fill it.

At the bottom of the excavated trench, sand is placed 5 cm thick. It is carefully tamped. Then, a layer of rubble is laid on the sand, at least 7 – 10 cm. They are trying to tamper this layer into the sand as densely as possible. When a relatively flat surface is obtained, the gaps between rubble are filled with a solution of concrete. The resulting canvas remains to dry for 7 to 10 days. 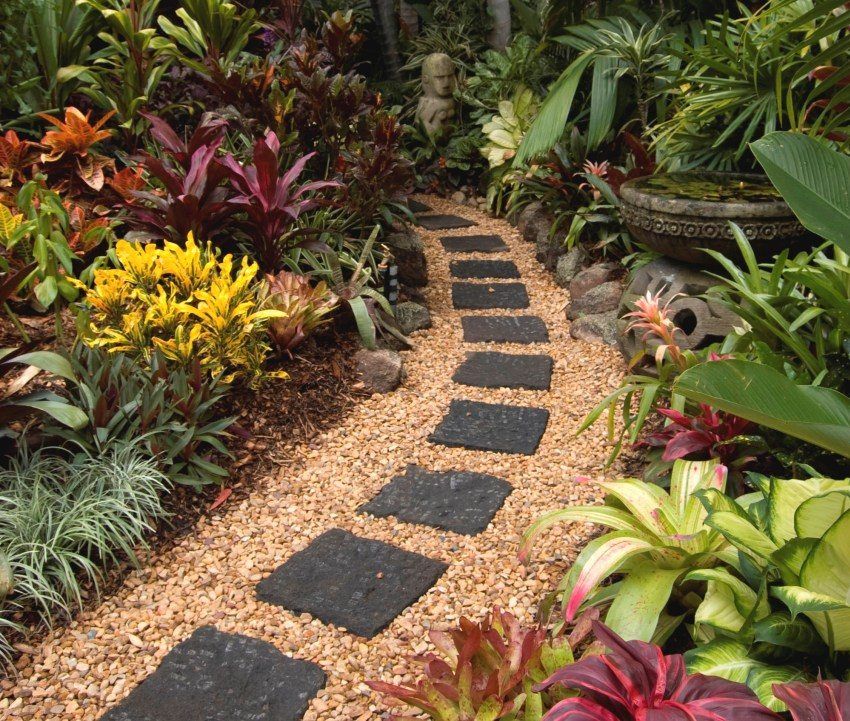 Helpful advice! To the path of rubble looked more aesthetically pleasing and did not creep away with time, you need to use a curb. For this purpose, suitable old concrete stepsons from electrical supports, steel or plastic poles, bricks and many other items.

Build an inexpensive brick path as follows. We need an old, but not cracked brick in a large enough quantity. Brick is laid in two ways: on the plane and on the edge. The second option requires more bricks, but more reliable. You can create a very original drawing by combining red and white bricks. 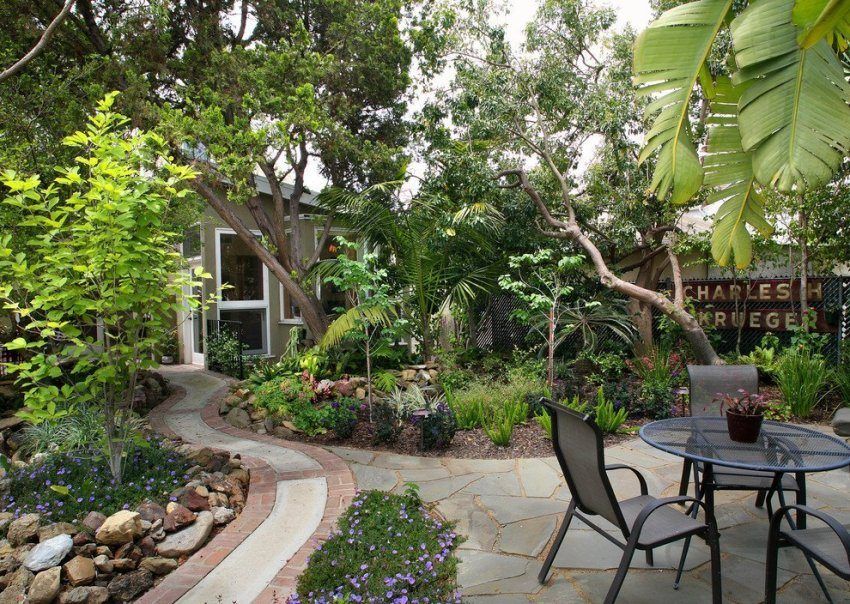 In the prepared trench we arrange a sand pillow, which we tightly tamp and pour with water. When the sand settles well, we start laying bricks. You can do this with different drawings: cross on cross, herringbone, snake or zigzag. From bricks of different colors, you can create an ornament. 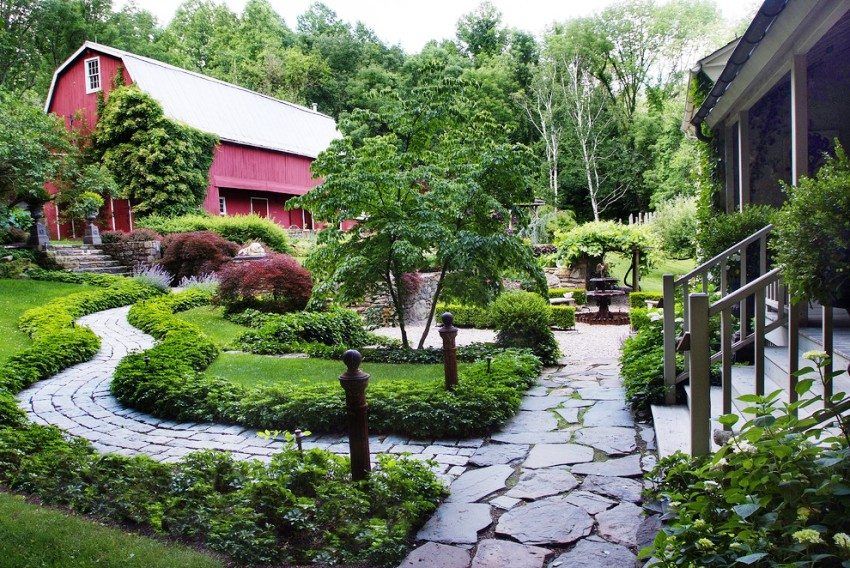 First put one row of several bricks. To level them, use a rubber mallet and a regular board, which is placed on the whole row and leveled at its level. When laying subsequent rows are guided by the first. After the required area has been laid, the bricks are bonded. To do this, prepare a dry mixture of sand and cement in the ratio of 3: 1. The finished composition is poured on the track and swept with a brush so that all the joints between the bricks are filled. After this, the path is slightly watered with water from the sprayer. 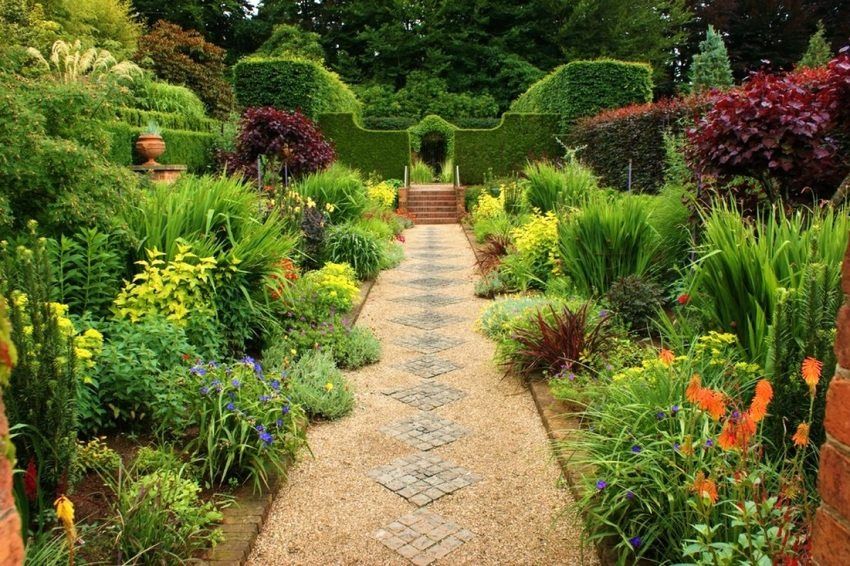 Construction of garden paths with their own hands at low cost can be made using very very waste material. An example is the paths of sections of trees. To make them, logs are cut to hemp with a height of 10 – 15 cm. Preparations are treated with any antiseptic agents so that they can last for at least 3 to 4 years.

Then prepare the pit under the path. To do this, remove the turf and pour sand, which is rammed. Hemp set close to each other or at some distance. The gaps are covered with sand or small gravel. 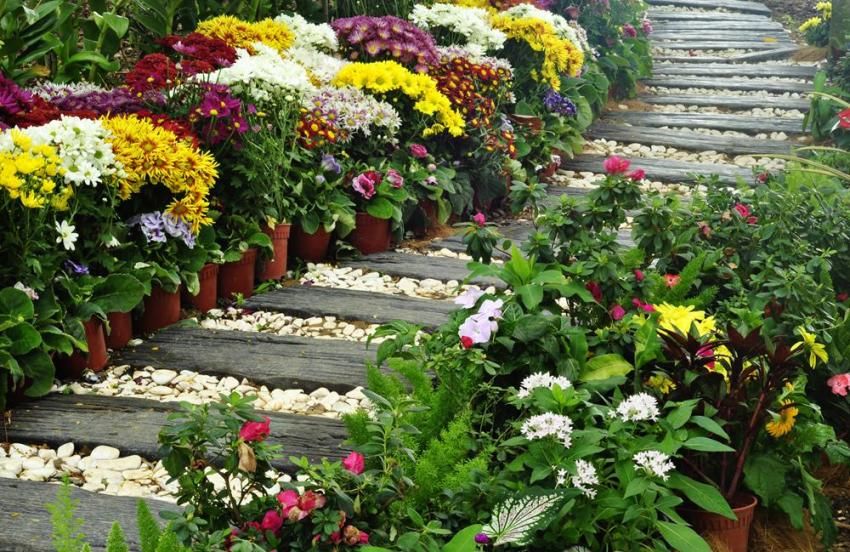 Helpful advice! The gaps between the stumps can be filled with sod or plant lawn grass. This will add extra naturalness to the track. 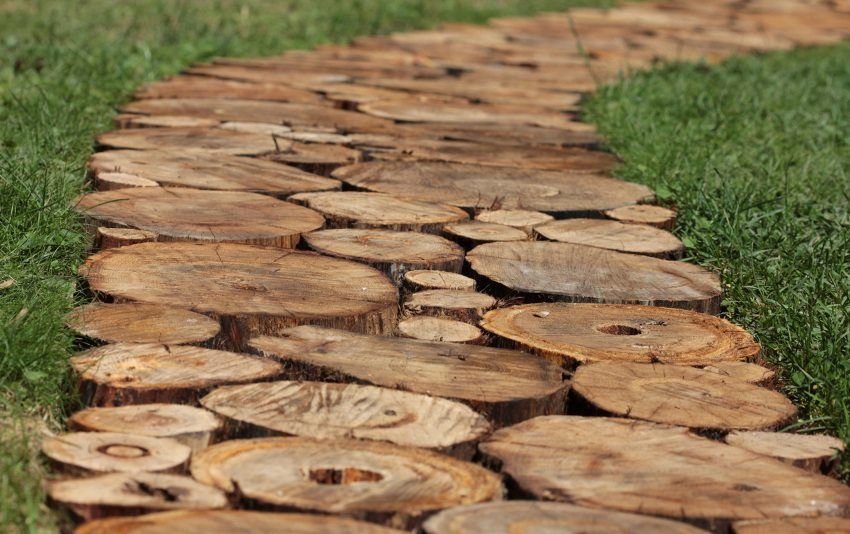 Concrete is very strong and quite durable material. However, his dull gray color is not always happy. Therefore, in order to avoid monotony, in the manufacture of tracks from concrete it is recommended to add colors of different colors to the solution. Paths of concrete can be monolithic, which make like the usual tie with the addition of reinforcement.

However, a more advanced method is to make concrete paths using a form for making garden paths. They are made of plastic or silicone. 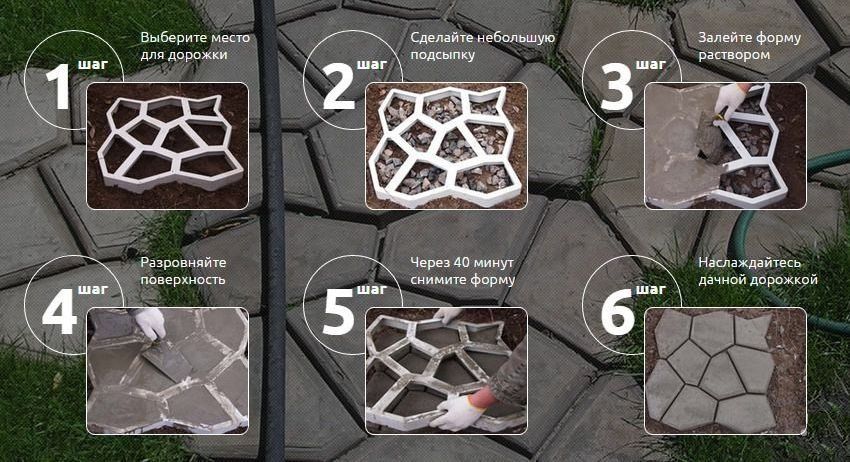 To make a beautiful and modern track, it is enough to install one or several molds in a line and fill them with a solution. After a few hours, the molds are moved on and the next section is poured. The tracks, built in such an original and convenient way, look so presentable, as if they are made of expensive ceramic tiles, if you add a dye to the composition.

Whichever way you make your own garden paths at low cost, the main thing is that the resulting object fits perfectly into the design of your site, is practical, and a minimum of money is spent on its device.

Expanded clay in its numerous positive characteristics is a versatile material. Due to the

How to choose a toilet: the main criteria and features of various models

How to register and register a private house in ownership

Shed do-it-yourself: how to create a hozblok of simple materials

Toilet for installation: a modern and comfortable solution for a bathroom

What is the best septic tank to give: choose, depending on the conditions of the site

Fan for exhaust in the bathroom: purpose, types and installation

Aluminum door: a variety of entrance and interior designs

Geotextiles: what it is and how it is used in construction

Floors in the apartment: what to do and how to choose