The process of growing vegetables and berries can be divided into two stages: the construction of a greenhouse and the care of plants during their growth. Whether spring strawberries will turn out to be delicious, and whether crispy cucumbers will appear on the table depends largely on how and from what material the greenhouse will be built. The covering film used by gardeners, reinforced tent or special material tarpaulin create the most comfortable conditions for greenhouse plants. 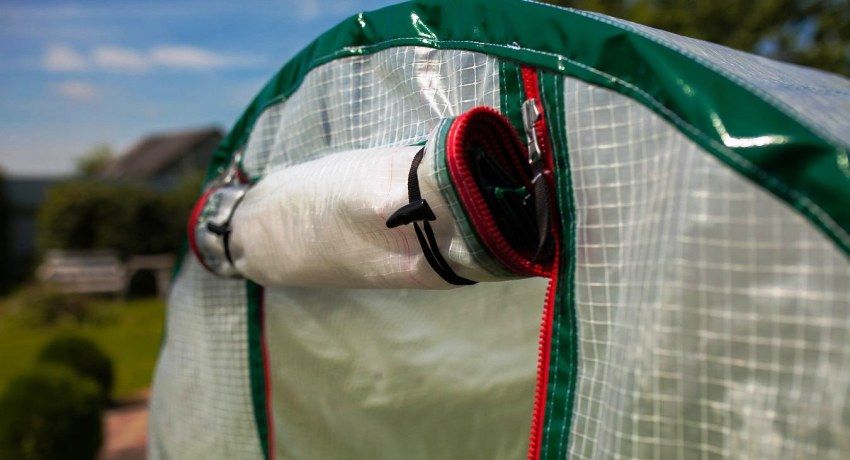 The main characteristics of the reinforced film

For a long time for greenhouses plastic film was the only covering material. She met many of the requirements, but after one year of use she was sick, and she was much worse in transmitting light. Yes, and the integrity of the canvas most often during one season was impossible to maintain, it was easily damaged even with minor mechanical effects. 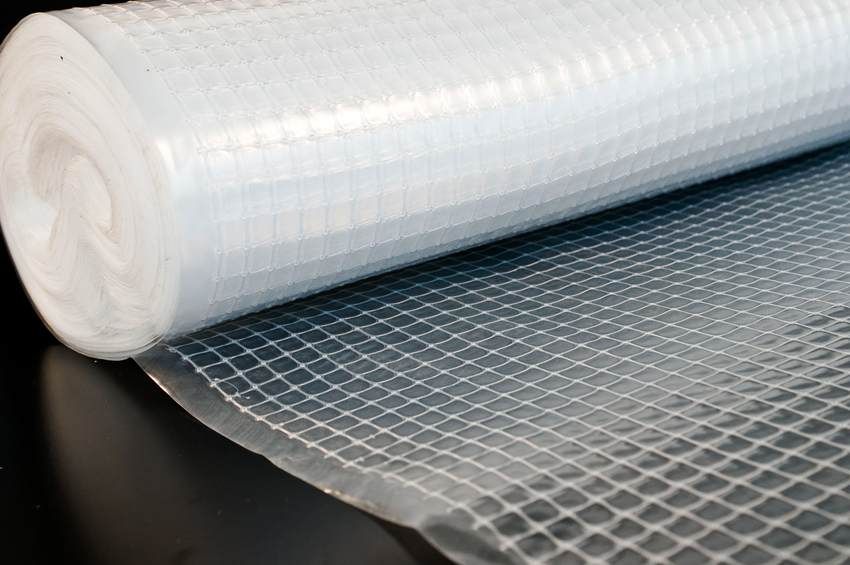 The reinforcement film for greenhouses that appeared on the market has practically supplanted ordinary polyethylene. She did not lose a single technical characteristics of this material, and it eliminated the main disadvantages of conventional polyethylene.

The reinforced canvas is a frame in the form of a grid on which a polyethylene film is deposited on both sides. It is the presence of a dense mesh that makes it possible to use this material as a reliable covering covering and gives it a number of significant positive characteristics. Advantages of the reinforced film:

This material is resistant to ultraviolet, can withstand difficult weather conditions, characterized by strong, up to a squall, wind, precipitation in the form of rain and hail. 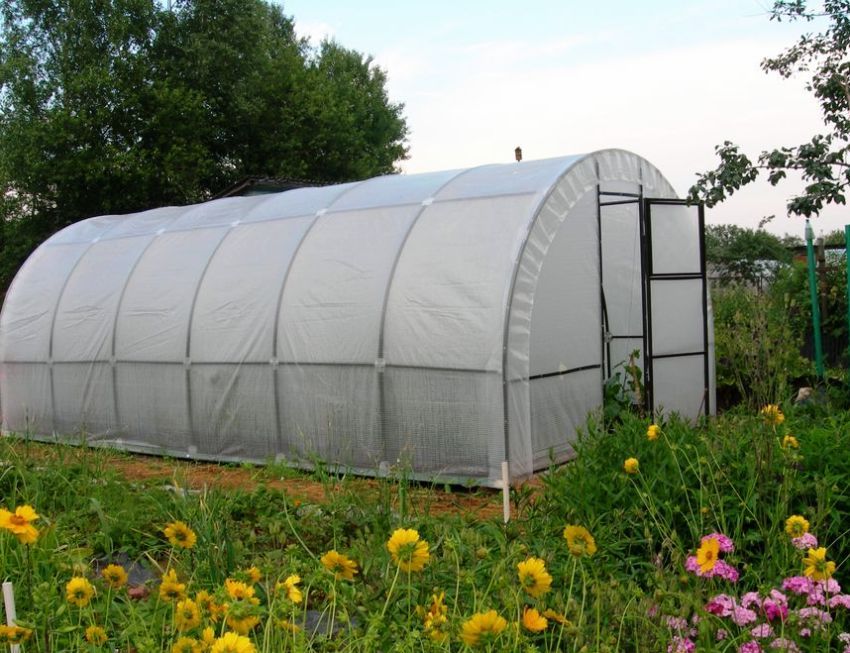 Produce several types of reinforced film. They differ in both the composition and size of frame weaving, and the quality of the deposited polyethylene layers. The frame is made by interlacing threads that are created from the following materials:

The thickness of the threads is different, which affects the strength and weight of the reinforced film. Cells may also vary in size. The film with large elements is more light-conducting; small dimensions increase the strength of the covering material. In horticulture, they mainly use a film having a cell size of 1.5×1.5 cm. This format provides optimally comfortable conditions for plants in greenhouses and greenhouses. 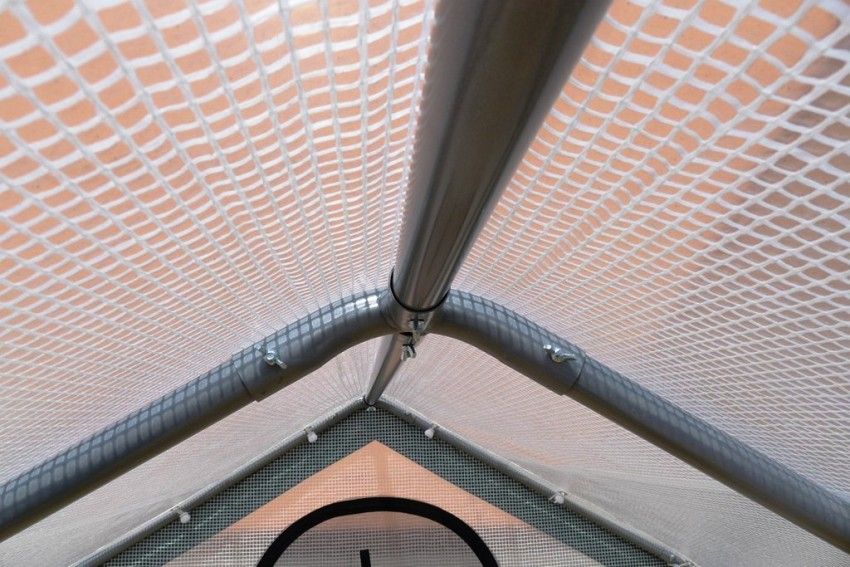 The films deposited on the skeleton differ in thickness, density, and additives, which improve the functional characteristics of the material. Additives provide the following properties of greenhouse films:

There are also membrane films, i.e., having microscopic holes in each cell, through which air — so-called “breathing” films — penetrates into the greenhouse.

The release form of the reinforced film is roll. The length of standard bundles is 10, 25 and 50 m. Sometimes there are rolls 100 m long. The width of the film can be 2, 3, 4 or 6 m. When winding into a roll for easy transportation, a wide fabric is folded: 3-4 meters in half, the height of the convolutions is obtained respectively 1.5 or 2 m; the 6-meter film is folded three times, as a result of which the height of the roll reaches 2 m. The cloths are hermetically packed, there must be a sheet with the characteristics of the goods inside. 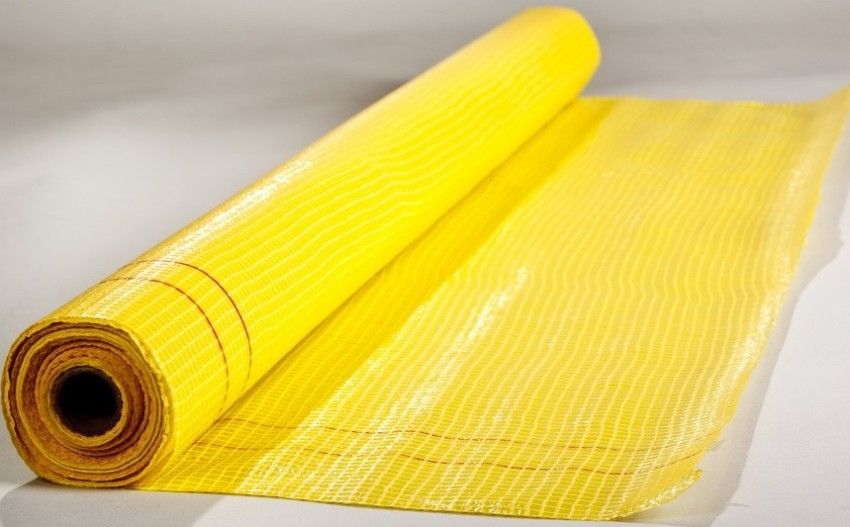 Helpful advice! When buying a roll of reinforced film, it is imperative to pay attention to the integrity of the package. If it is damaged, it is likely that there are defects on the material itself.

The scope of the reinforced film is extensive. It is used wherever there is a need to build temporary rooms, to shelter a structure, materials, objects, openings or plants from precipitation, moisture penetration, winds, low or high temperatures. The main areas where reinforced film is used: 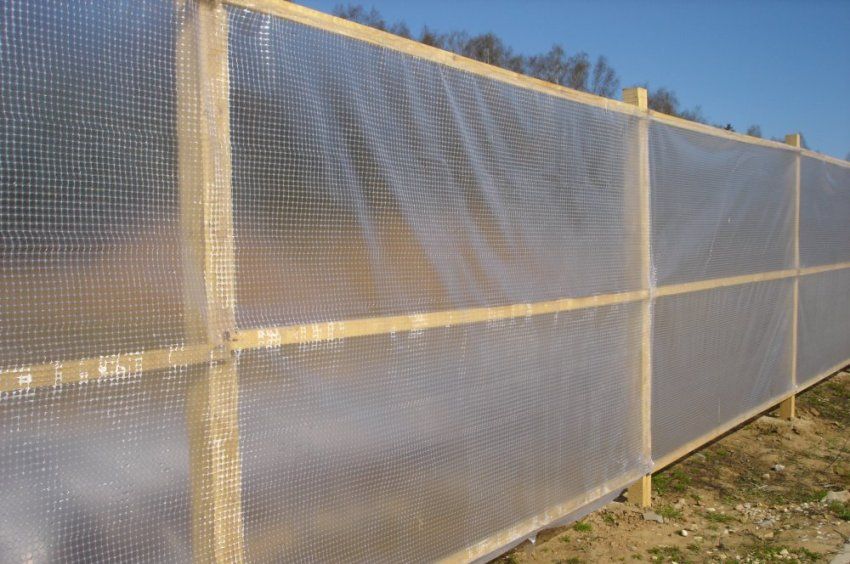 The active use of reinforced films in various areas of production and everyday life is facilitated by its elasticity, flexibility and low weight. It is not difficult to fix, dismantle and transport this material, working with a film does not require complex and expensive tools, and does not require special skills.

Before you cover the greenhouse film, you must carefully calculate the size of the covering sheet. It is necessary to calculate the turns, bends, taking into account the features of the frame structure. The reinforced film does not stretch, it will not work even by 1-2 cm.

Special attention should be paid to color. In order for the plants to create optimal conditions, it is better to choose a white film. It least delays sunlight (translucency – 85%). If we take into account that reinforcement reduces this parameter quite significantly, using green or blue film, we must be ready to lower the illumination by another 5-7%. It is possible to purchase a color coating only if the types of crops are planted in the greenhouses for which such conditions are acceptable. 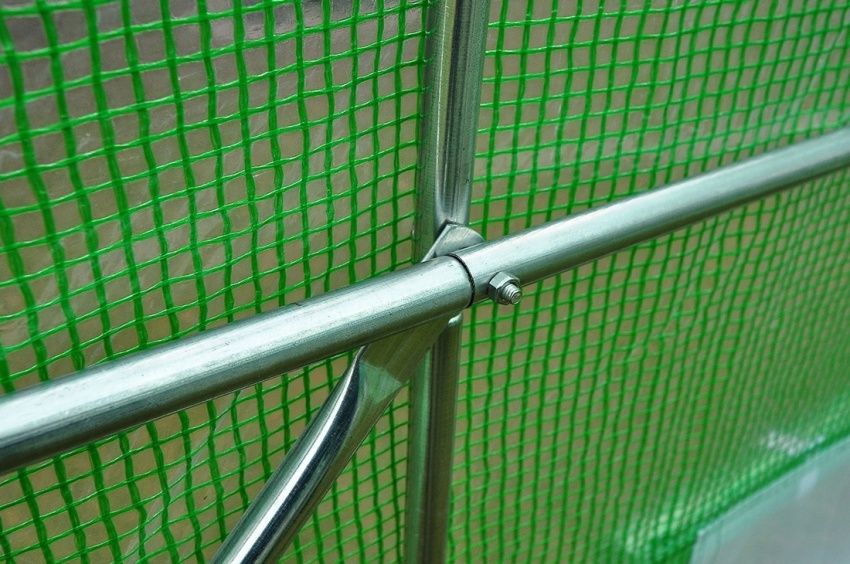 Significant indicator – density. It depends on the strength of the material, durability and price. Traditionally for greenhouses choose material from 120 to 200 μR.

Helpful advice! When purchasing reinforced film for greenhouses, do not rely only on the information (regarding density) placed in the product card of the online store or heard from the seller-consultant. Be sure to require a certificate of quality goods, which will indicate the exact data. Visually and by touch, the density of the reinforced film cannot be determined, and unscrupulous sellers often use this.

The main characteristics that should be paid attention to when buying a reinforced film: 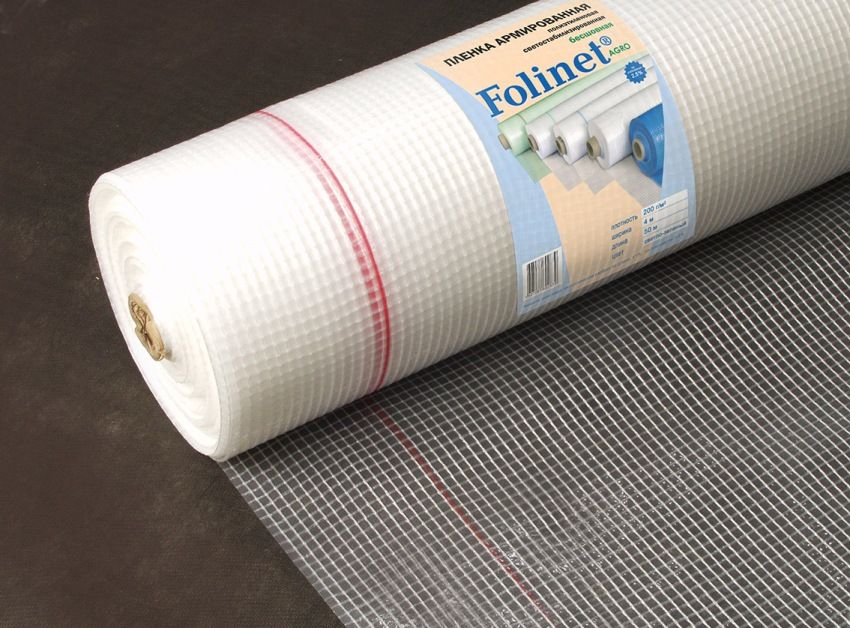 Often, preference is given to a 200 μr reinforced film. It belongs to the average price segment, withstands significant mechanical loads, it is easy to work with. However, you can buy a 400 micron reinforced film for the greenhouse. The price of such material is slightly higher – by 3-4% relative to the cost of a 200 micron density film.

If you cut out blanks from fabric, glue them hot (using a soldering iron or a blowtorch) or in a cold way, using adhesives, you will get a cover on a greenhouse of 400 μR reinforced film, which is convenient to put on the frame at the beginning of the season and take off at the end. You do not have to spend time laying, fixing the web, there will be no risk of damaging it during fixing.

Before the equipment of the greenhouse, it will be useful to get acquainted with the opinions of those who have already used the film. Not a single instruction takes into account all the subtleties and nuances that arise during practical use. 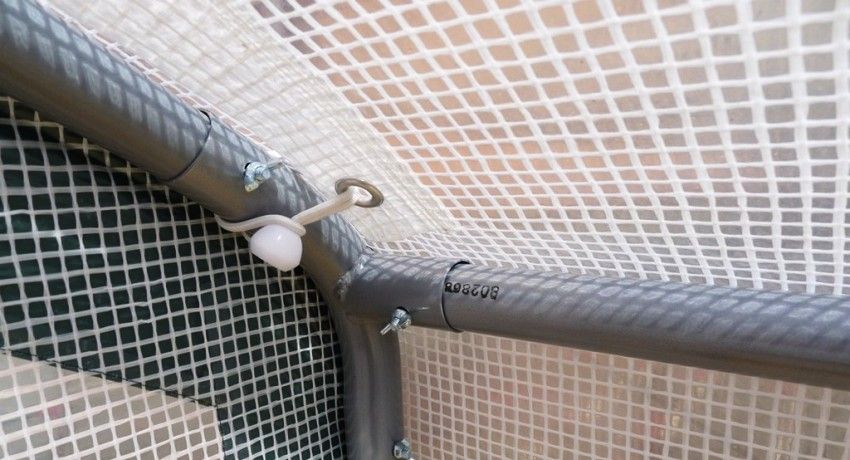 “Leno film, 170 microns. This year, the second time laid. Normally, the light did not get worse. I have a rectangular greenhouse, always had problems with the sagging of the canvas. This is not so: as secured, and lies – no cavities. “

“Tough mesh film, perfect. True, I had to fix the frame. Even lines cut off, and the curvature of the beaten rails immediately began to appear. But now he himself is satisfied: a great greenhouse is worth it. The grid of rays of the sun refracts, and inside the heat is not burning, but soft, moderate. While cucumbers, lettuce, radish develop normally. No wonder the money spent “

“I heard the opinion that during the year of use the reinforced mesh remains intact, and the film crumbles. Nothing has been damaged in two seasons, and this cannot happen unless the grid is hollowed out. I am satisfied with the state of the material, I am sure that the third season (and maybe more) will use this film. ”

In some reviews, users give tips to listen to. 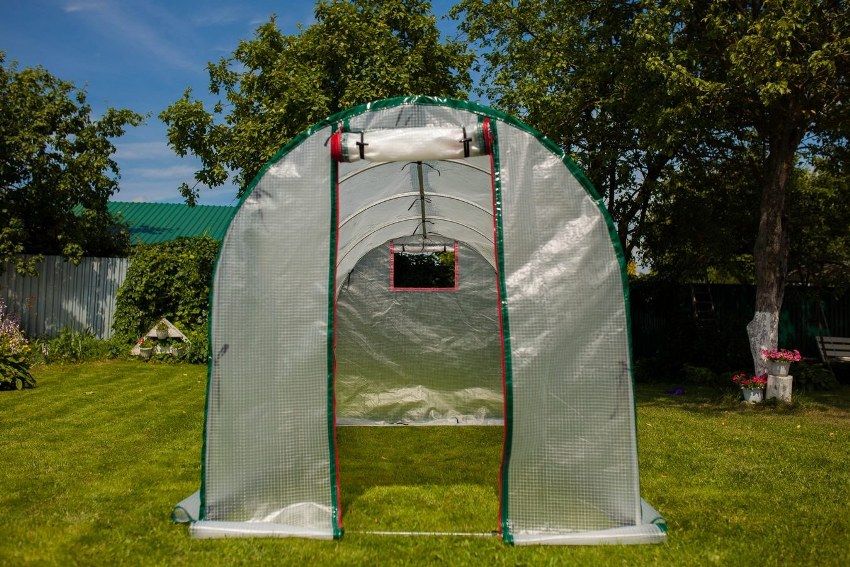 “I have a 200 micron reinforced film on my greenhouse. Strong, for two years absolutely never torn. The greenhouse is large, almost 30 squares. I prepared the scotch to patch, but it was not needed. True, he made a mistake. The frame is made of wood, and the film was nailed with a furniture stapler. Staples every one and a half centimeters. When I shot them, I made a hole. This is the first year of use. And this season, he put the tape, which is packed with boxes of heavy equipment, and broke through the film through it. And it is more reliable, and I will not make holes, when I will shoot. And you can just put a film of dense polyethylene. “

The main shortcomings identified in the individual reviews, mainly related to the fragility of use.

“So much money this reinforced film is definitely not worth. When I pulled on polyethylene, at least I knew it was for a year. And here they promised at least 3 seasons. After the first she already wants to throw it away! Hole is full, dirty. ”

The second type of designation of official dimensions is according to the cutting of the canvas, i.e. on the tent indicates the size of the blanks. Naturally, the canvas is bent, part goes to the seams. These are tarpaulin tents. If you bought a material with dimensions of 3×4 m, but it turned out that the sides are less than 20 cm, this is not a hoax – this is the method of designation. Consider the difference in size is recommended before purchasing the goods.

You can list the positive characteristics and disadvantages of waterproof and vapor barrier reinforced film. You can argue about quality and disagree with the methods of designation of sizes, prefer imported or domestic goods. But two indisputable advantages of the reinforced film cannot be admitted: a reliable shelter is obtained from it, and the process of laying the material itself becomes much easier.

Kitchen with installed hood more comfortable. Thanks to her, the air is free of
A unique offer for you

Grinding machine for wood. Types and features of work

Video door phones for the apartment: how to choose, install and use

Dishwasher rating: review of the best devices from popular brands

Greenhouse made of polycarbonate do-it-yourself: instructions and recommendations