Changeable climatic conditions force gardeners and gardeners to take care of their plants, covering them with plastic wrap. It passes sunlight well, maintaining an acceptable temperature for seedlings. But covering material for beds of polyethylene breaks in one season of use. Therefore, a durable substitute appeared on the market – non-woven polypropylene fiber. 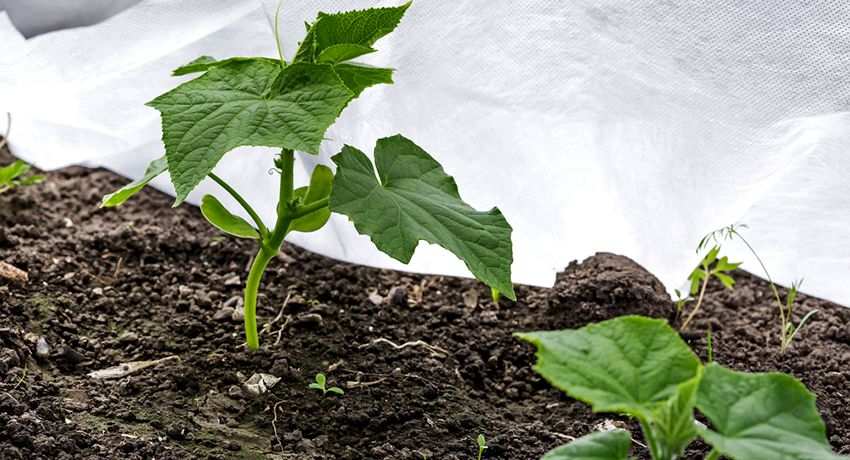 What is the name of the covering material for the beds: its types

Materials intended for the protection of plants are most often referred to as spunbond, agrotextile and agrofibre. From a technical point of view, these are different names for the same covering product. In practice, only the specific gravity and color of materials matter, their ability to trap ultraviolet and pass water. Geotextiles occupy a special place among such goods. It has a higher density than the other analog of the covering sheet. The use of geotextile by gardeners is limited to creating a substrate for grown plants. In this way, effective weed control is carried out. 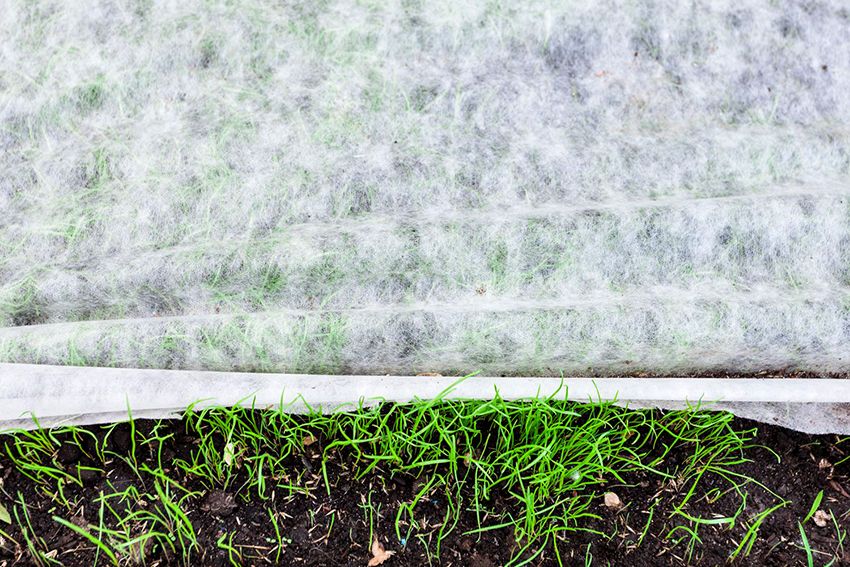 Agrofibre’s average shelf life is 6-7 years, and geotextiles (as a more durable analog) last even longer. Such a long period of operation makes it economically feasible to purchase covering materials as opposed to rapidly exploding polyethylene.

There are three main functional types of data “blankets”, intended for growing plants in the garden: 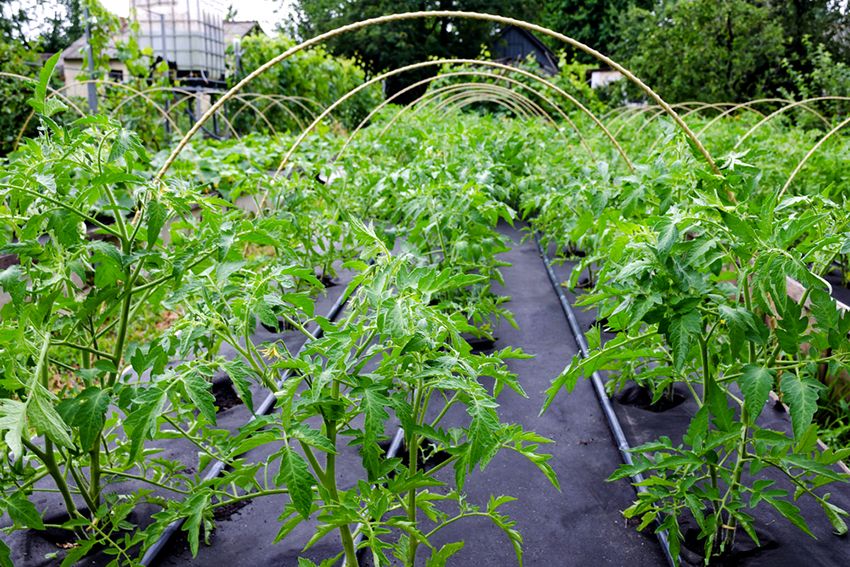 For certain types of garden crops produce agrofabrics of gray and green colors. Regardless of the density of these materials when laying on the ground do not require the construction of the frame. Black weed film is used to mulch the earth, white agrofibre is used to reflect the visible part of the spectrum of sunlight and to absorb infrared rays. Regardless of color, all types of covering materials are designed to allow moisture to pass freely to the roots of plants, and air to their leaves.

A special type of agrofibre is designed to create shading nets. With their help, plants are not allowed to wither under a powerful stream of solar ultraviolet radiation. Such a grid is stretched onto a light frame in the form of a dome-shaped structure. In addition, it protects the crop from the encroachment of birds.

Weed grass on the land plot causes significant damage. The most effective way to control weeds is to remove them by hand, but it is physically hard. In addition, certain types of weeds reproduce by growing parts of rhizomes and shoots remaining in the ground. Therefore, we have to carry out weeding several times during the season.

To help gardeners, manufacturers have developed and put on sale a special covering black material. It freely passes precipitation and air, but completely retains the sun’s rays. No weeds can survive in such conditions.
This material is often called the black spunbond, which is not entirely accurate. Spunbond is both the name of the trademark and the name of a special technology for the manufacture of nonwoven fabric. Covering materials of such firms as Agrotex, Lutrasil, Agrospan, Lumitex, Agril and others are widely represented on the Russian market. 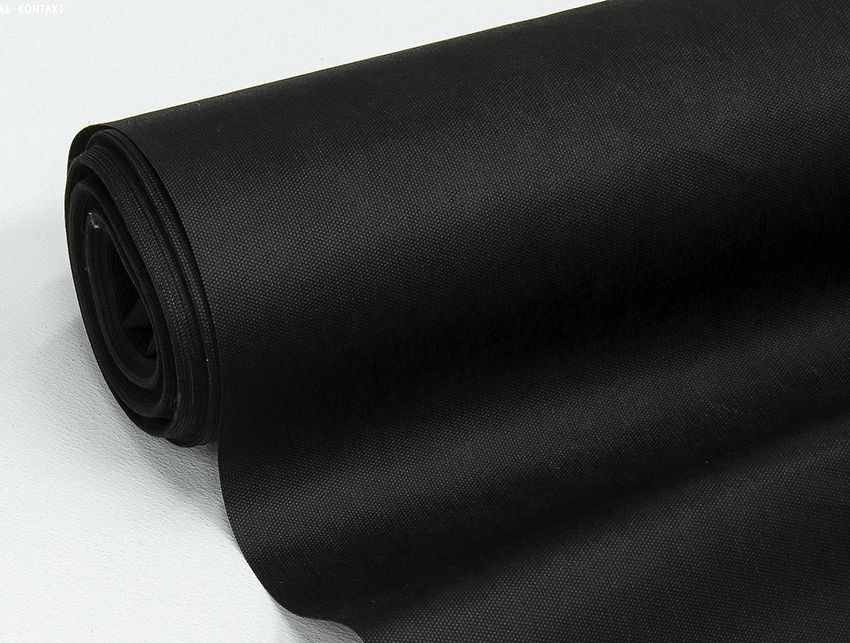 It is very important to use agrofibre correctly:

This agrofiber is called mulching. The advantage of its use is the absence of the need for weeding, as well as the earlier ripening of vegetables and berries. In particular, a bed with strawberries under a black covering material can give a harvest two weeks earlier than usual. The advantage is that ripe berries do not touch the ground, which means they get dirty less. Thus, the cost of water for washing the crop is reduced before it is sold. 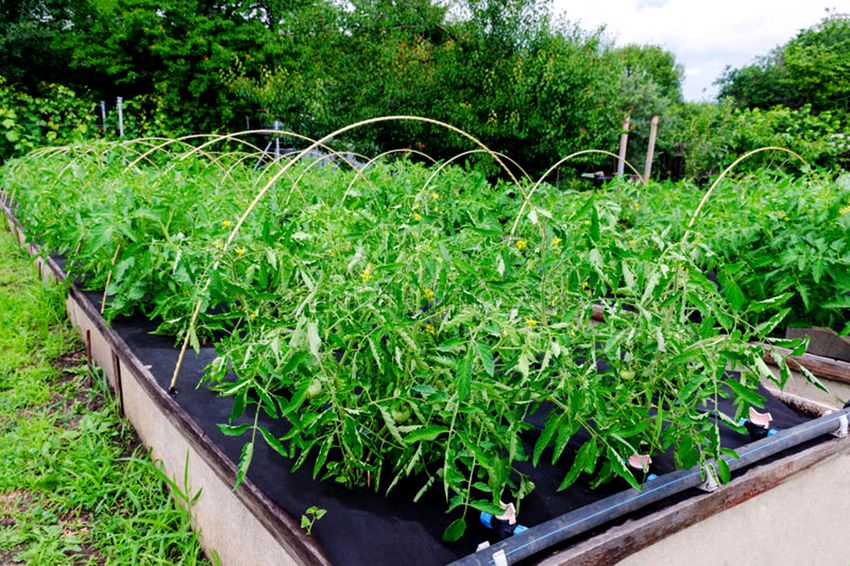 Relatively recently, began to use black and white covering materials. This know-how looks like this: the black side of the canvas is laid on the ground, the white color remains on top. Its surface well reflects the sun’s rays on the plants growing in the slots, which has a beneficial effect on their growth.

Polypropylene protective coatings were first used for greenhouses using a frame base. But it soon turned out: if you reduce the proportion of such material, it can be successfully used on the beds. For example, for strawberries, the density of polypropylene fibers should be from 17 to 30 g / cm? surface. This coating used for this berry is great for growing raspberries, cucumbers, potatoes and peppers. The lightest materials (with a density of 17 g / cm?) Cover the early greens: dill, parsley, onion and basil.

Strawberry under the covering material feels great. The absence of problems in the care of plants makes it possible to reduce the labor costs of gardeners to grow this crop several times. 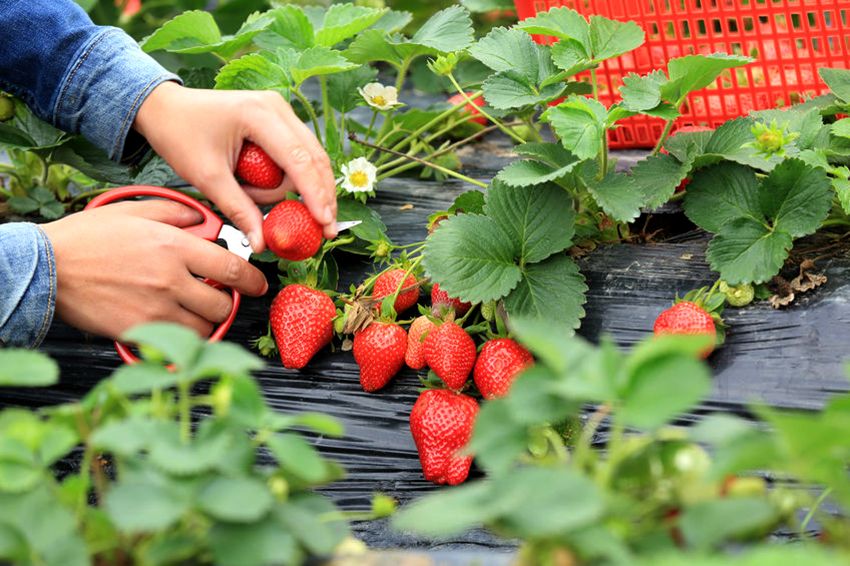 As a result of the use of this type of material, we obtain a number of advantages: the strawberry yield increases significantly, the berries under shelter ripen faster, the beds are not afraid of frosts. In addition, during dry periods, the loss of moisture is reduced – therefore, water is saved for irrigation. It becomes virtually impossible for birds and pests to reach the harvest.

Helpful advice! The prices of covering materials for beds from different manufacturers are not too different. Pay attention not so much to the cost and trademark, but to the density of polypropylene.

With a relatively modest financial investment can be equipped for strawberry beds drip irrigation system. It will pay for itself in a few years by saving water and electricity. At the same time, it will relieve the complexity of watering the berry crop through the holes in the substrate. The roots of the plants will never dry out, giving sustainable shoots and abundant yields. 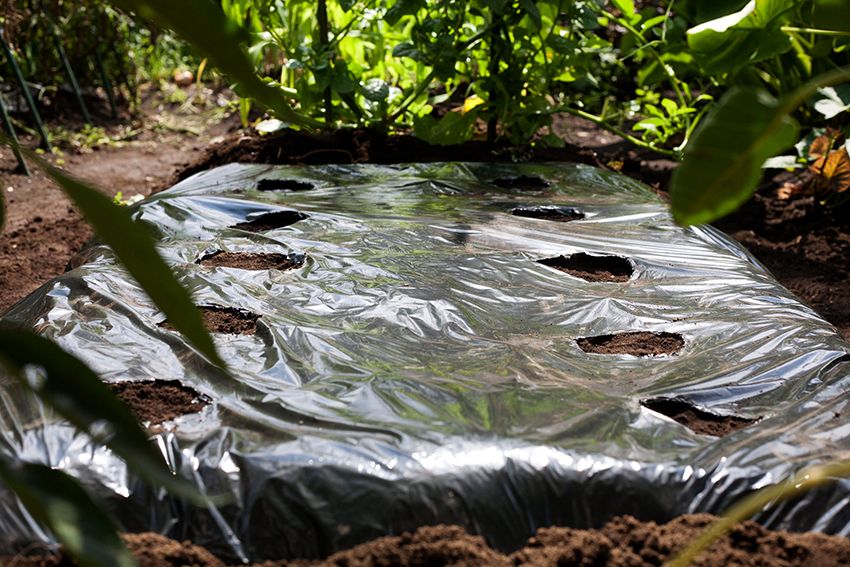 Strawberries can be planted on black covering material in spring and autumn. It is recommended to grow this crop on the same bed for three or four years in a row. Experts in the field of agriculture emphasize that when used for planting young seedlings, their yield will increase every year, regardless of the strawberry variety chosen.

This garden crop grows well in warm conditions with sufficient, but not too much sunlight. Grow a good crop of cucumbers is quite difficult. In early spring, these plants may die from frost. In the summer, they suffer from extreme heat and lack of moisture. There are also many types of insects and microorganisms that can harm cucumbers.

Helpful advice! If a lot of pests appear on the site: vole mice, ants, slugs – laying of mulching agrofibre in two layers is allowed. Before you start laying the canvas, it is advisable to lightly sprinkle the beds with finely ground black pepper. 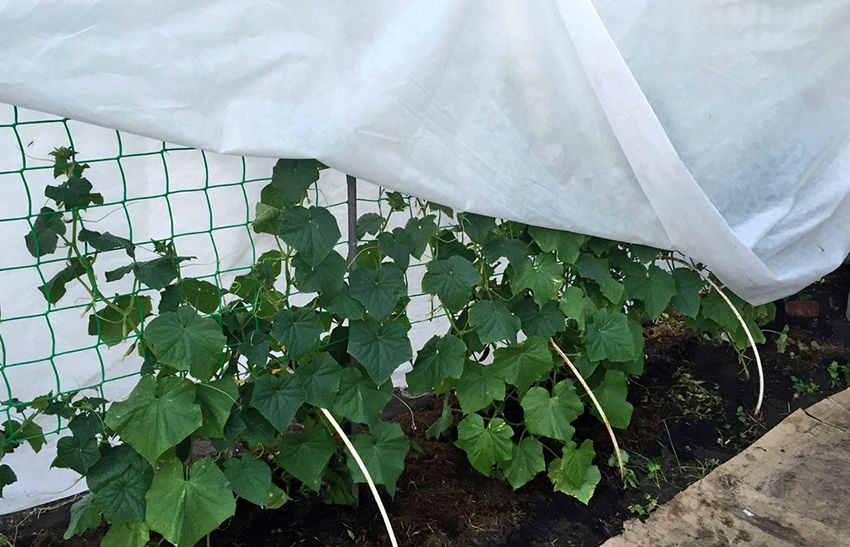 To solve all these problems will help the appropriate protective materials. To cover the top using a conventional or bubble polyethylene, as well as PVC film. There are also reinforced versions of such canvases to give them greater strength. As the top cover for cucumbers, you can use a white spunbond or its analogue of low density – about 28 g / m? (the same density is suitable for tomatoes).

The advantage of the latter option is the ability to water the seedlings from above. Liquid will seep directly through the fibers of the material. In addition, agrofiber retains ultraviolet rays, redirecting only the soft part of the spectrum of sunlight to cucumber seedlings.

The best option for laying the ground on the bed – non-woven agrofibre. This black weed cover material has several advantages. It is easy to make holes in it. Through them, the plants are watered and fertilized (usually rotten leaves, compost or manure). The moisture at the same time practically does not evaporate from the soil, which means that watering of cucumbers can be carried out much less frequently. Access of insect pests to plant roots will be significantly hampered. 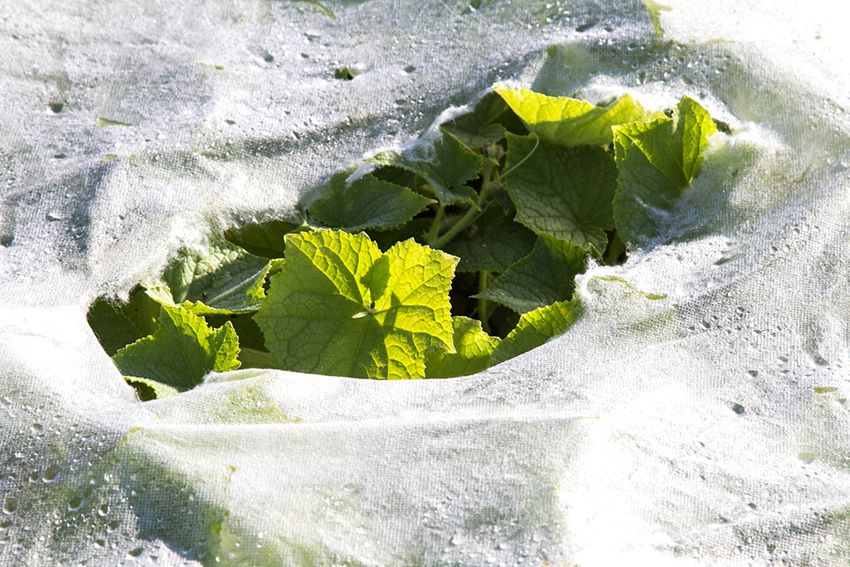 Helpful advice! Planting cucumber seeds should be carried out in a moist and warm soil. Plants are planted at a distance of 50 cm from each other. With this in mind, it is necessary to make holes in the agrofibre spreading on the ground.

The optimum temperature for growing cucumbers is 20 ° C during the day and a few degrees lower at night. The use of covering materials allows us to withstand the required temperature directly in the open air, without placing plants in greenhouses.

Moisturizing cucumbers using agrofibre is sufficient to hold only twice a week (after planting in the middle of spring). The best way to fertilize is watering with sodium humate dissolved in pure water. Concentration – one spoonful of ingredient per bucket.

If you need to choose the cheapest material to protect plants from adverse conditions, then suitable polyethylene. It is transparent, it lets the sun’s rays outside, and the heat accumulated over the soil keeps it inside. 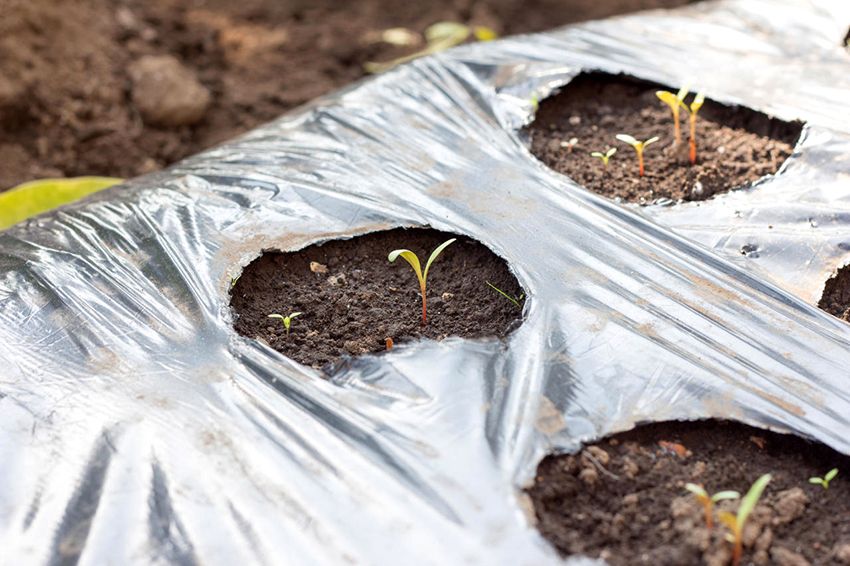 Polyethylene has some disadvantages:

Nonwovens in the garden have another application. With their help, you can equip the tracks along the beds. On the one hand, we get additional protection from weeds. On the other hand, the base of such a track will absorb water well, which will prevent the structure from deforming. In its lower layer is rubble, above – geotextiles, then there is a layer of sand. At the very top – facing from a tile or from a stone.

As can be seen from the above, there is no problem in choosing which covering material for the beds. It is only necessary to take into account the climatic zone in which the vegetable garden is located, the size of the beds, the type and variety of plants grown, as well as the season planned for agriculture. Taking into account these factors, you can get a guaranteed increase in yields from each hundred of land with a simultaneous decrease in labor costs.

The better the quality of the soil, the richer the crop grown on this
A unique offer for you

Laying paving slabs on a concrete base: theory and practical advice

Do-it-yourself formwork for the foundation: how to avoid mistakes and install

Mosaic tile for the bathroom: varieties, design choices and styling

Siphon for a sink with overflow. Subtleties of choice and installation

Visor over the porch of polycarbonate. Photos and design features

What is a second light in a house project

Bathhouse with a pool: a project of an amazing sauna complex for relaxation