Forced air extraction may be necessary in many cases. This is true if we are talking about rooms in which you need to create a certain microclimate or are characterized by high humidity, and special exhaust fans are used for this. They exist a large number of varieties, but one of the most popular are duct fans for round ducts. 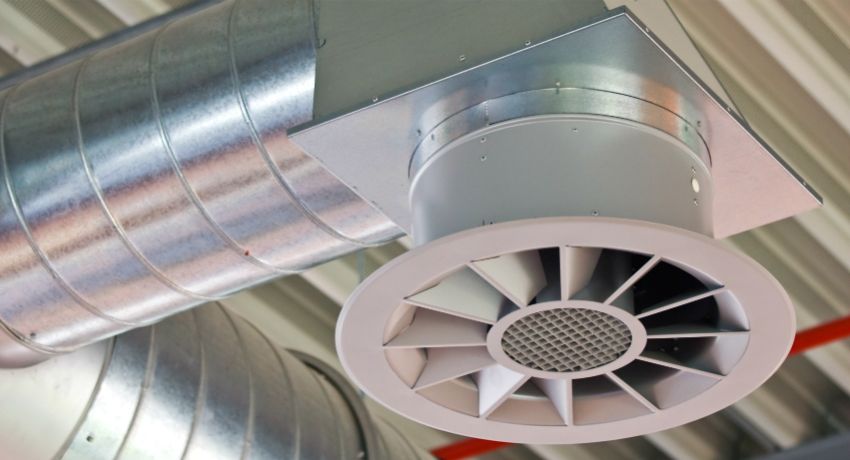 Features and types of household duct fans and industrial models

A duct or straight-through fan differs from other variants of devices for forced air circulation in that here both the fan and the electric motor for its rotation are in the same housing. In addition, this system is mounted directly into the vent, which greatly increases the efficiency of its work. 250 mm duct fans and other variations may differ in the material from which the casing is made, in the principle of operation and a number of other characteristics. 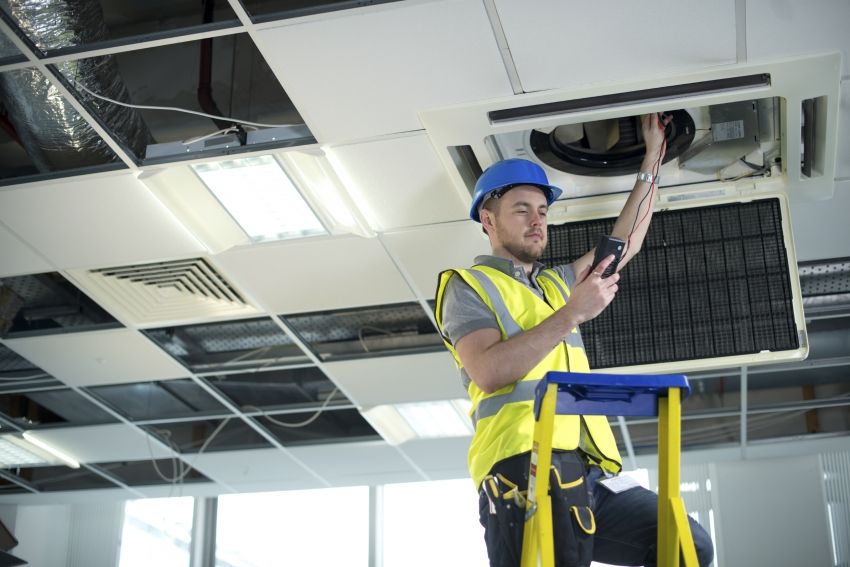 The form distinguishes the following types of fans:

Also, axial and radial or centrifugal devices are distinguished. The technical characteristics of axial industrial fans and household models differ from radial ones in that they spend less energy due to the features of their design. In the axial exhaust fan, the air masses move along the axis, so the air resistance during operation of the device is rather small.

Buy a radial fan is worth it if you need to maintain a microclimate in a room with a large area. This type of exhaust device differs from the axial one in that its blades have a spiral shape. Thanks to this design, the outgoing air flow is directed perpendicular to the incoming. In addition, the air suction capacity of radial fans is greater than that of axial fans, therefore, it is more advantageous to use them in warehouses and industrial premises. 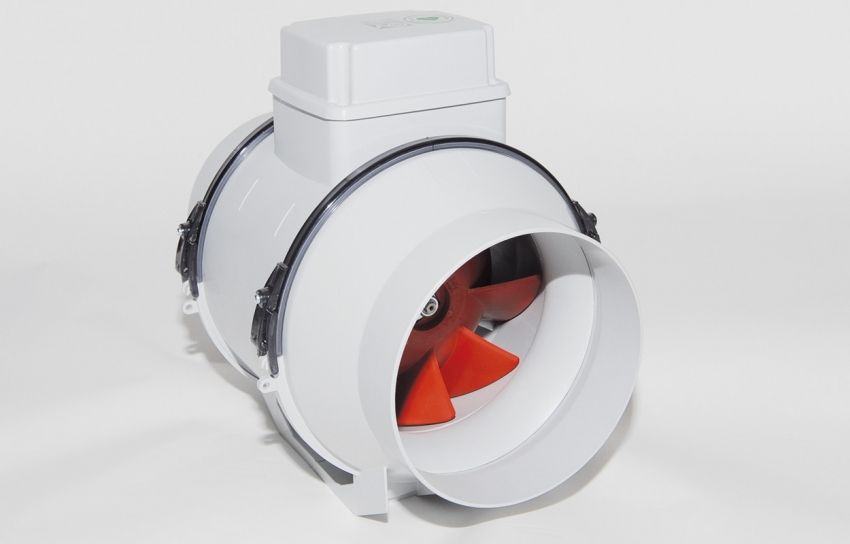 The casing of the duct fan 200 mm and other sizes can be made of plastic or metal. The first option is designed for a small amount of air, so it is better to use it for the organization of ventilation in the apartment. The steel case is the best suited to work at high power, so the fan in it will be effective for use in industrial premises. In addition, the price of a radial fan in a plastic case will be significantly lower than in a metal case.

When choosing a device for exhaust air, it is necessary to pay attention to the following characteristics.

Maximum air flow – the higher this indicator, the greater the volume of air the fan pulls out of the room for a certain period of time. Accordingly, if the device is needed to maintain a large area, then the maximum volume of air flow should be as high as possible. A household fan for a bathroom or toilet has a parameter of up to 350 cubes, and an industrial fan, up to 17,000. In addition, there are models with a maximum flow rate of up to 50,000 cubes, but the price of an industrial exhaust fan with such a power of operation will be very high. 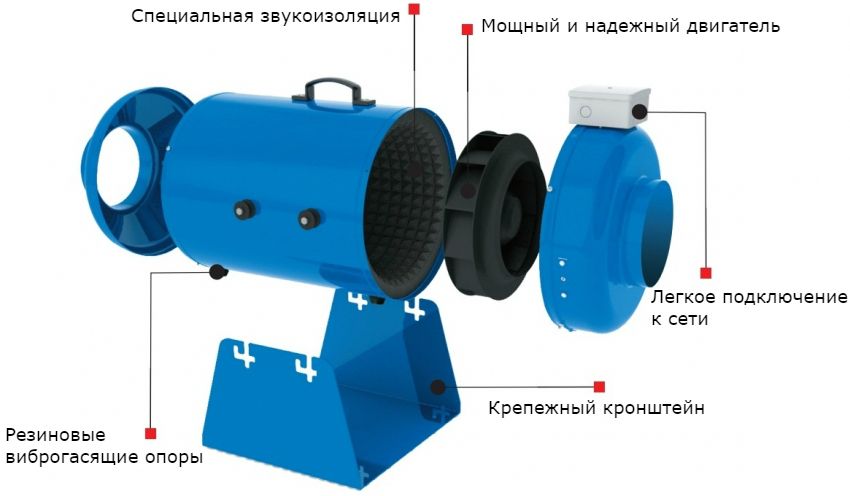 Blade type – they can be straight or curved. If the industrial exhaust fan has forward-curved impeller blades, then its efficiency improves markedly. But it is necessary to pay attention that together with this the amount of noise produced by the device during operation increases. Also, the blades can be bent back, which makes the operation of the device virtually silent.

Helpful advice! A fan with forward curved blades is best installed in an industrial area where the noise level is not critical, but power is very important. But the backward curved blades are good for models used for exhaust in the bathroom or toilet.

Outlet Diameter – must correspond to the diameter of the ventilation passage in which the device is installed. So, 160 mm duct fans should be chosen for large ventilation openings in industrial premises, and for domestic purposes, models with a nozzle diameter of up to 100 mm are most often used. 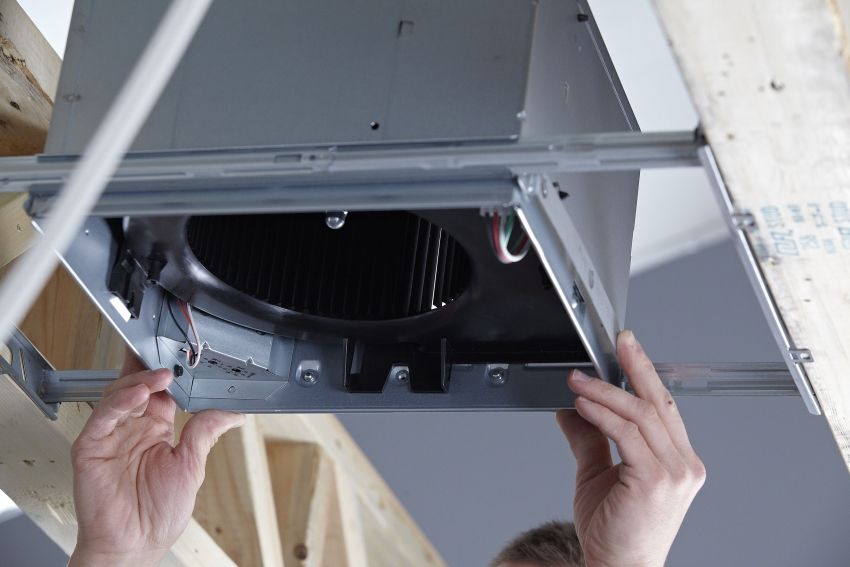 Air speed – The recommended parameter here is 11-14 m / s. If the speed is less, then it will not be enough for effective exhaust of air, and if more – the noise level will be too high.

If you are going to install the device in a residential area, and the noise level for you is a determining factor, then you should get a silent model, which has several advantages, due to the design features:

The acquisition of an industrial low-noise axial fan is important for shopping centers, cafes and other premises that require a high level of exhaust efficiency, but noise is undesirable.

Also, to reduce the noise level, you can purchase flexible inserts for the radial fan. They serve to absorb vibrations, can be installed at the inlet and outlet of the fan and can be used at air temperatures from -50 to 50 ° C. 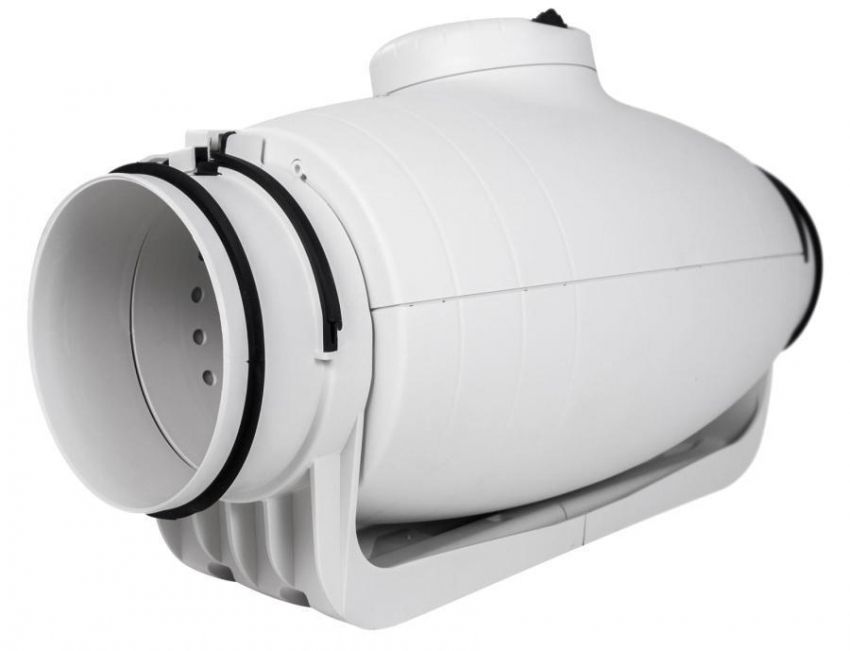 Separate modification of channel fans – reversible. They are characterized by the fact that they can simultaneously perform two functions – drawing air from the room and the influx of air masses into it. This is realized by changing the direction of the fan blades.

The special features of 12 Volt reverse radial fans, which can be bought in many specialty stores, include the fact that they are not well suited for working in a humid or dusty environment. This means that they are not recommended for exhausting in bathrooms or in other rooms with high humidity.

Some industrial centrifugal exhaust fans can be equipped with a check valve. This design feature does not allow air from outside to enter the room when the device is turned off and will be relevant if your home is located in an area with high levels of air pollution. The check valve can be of three options:

Helpful advice! Any type of fan valve should be cleaned regularly, since it is usually where dirt, dust and condensate accumulate. 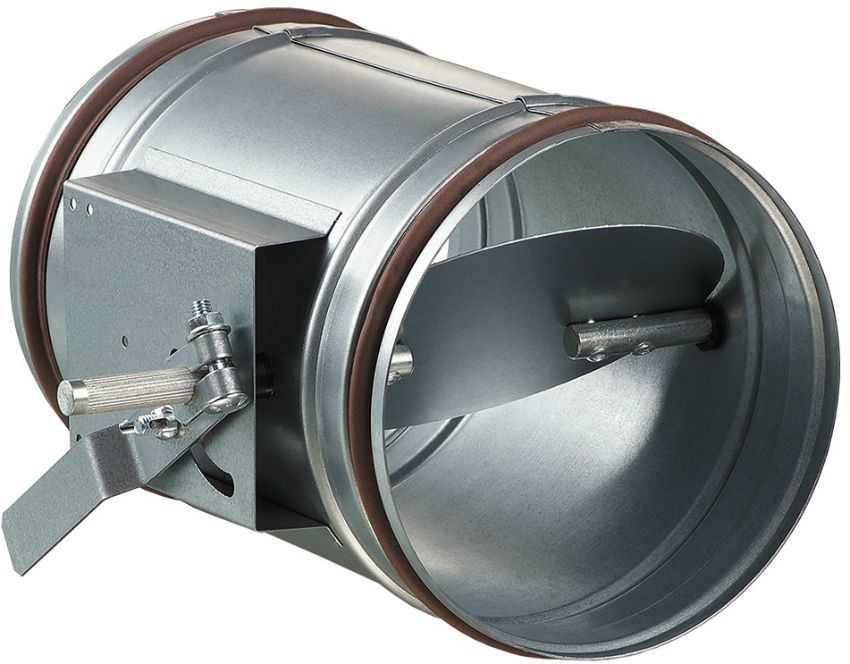 Appliances used for forced air extraction in industrial premises are also called snails. Radial fans of this type differ in a number of parameters.

Duct fans 150 mm low pressure – these are exhaust devices oriented to one-sided suction of air and can work with air masses with temperatures up to 80 ° С. This fan is designed to work with air without solid impurities, as well as non-aggressive gas mixtures, and is used in various types of industrial premises.

Explosion Proof Axial Fan designed to work in an explosive environment, used to extract gas mixtures without fibrous materials, solid particles and sticky substances. Explosion-proof devices are often used in factories where work with flammable and explosive substances is carried out.

Medium Pressure Radial Fan it can be used for drawing and moving various gas mixtures with a temperature not exceeding 80 ° C and without solid impurities. A feature of the design of models of this type is a spiral swivel case. They can be used in explosive production and work on the principle of one-sided suction. 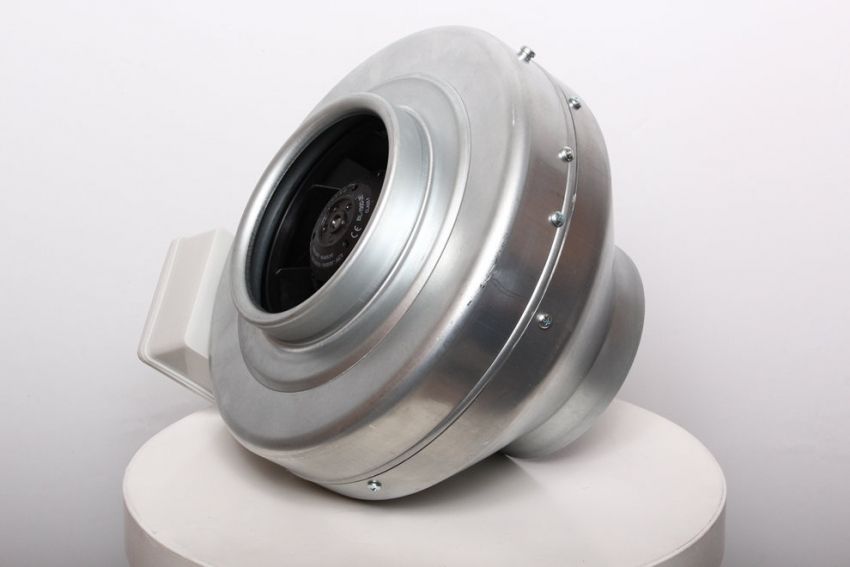 High pressure radial fan It works on the same principle as the low and medium pressure models, but is characterized by greater efficiency and productivity. The design of the fan provides 12 backward curved blades that effectively cope with the movement of air and gas mixtures without solid particles.

Dust fans they are used in rooms where the air contains a large amount of solid particles and impurities.

Rooftop Radial Smoke Fans designed to quickly remove smoke from the premises in case of fire, can work in conjunction with the air duct network or without it. Explosion-proof duct fans of the roof type can be used in an explosive environment and can move combustible gas mixtures. 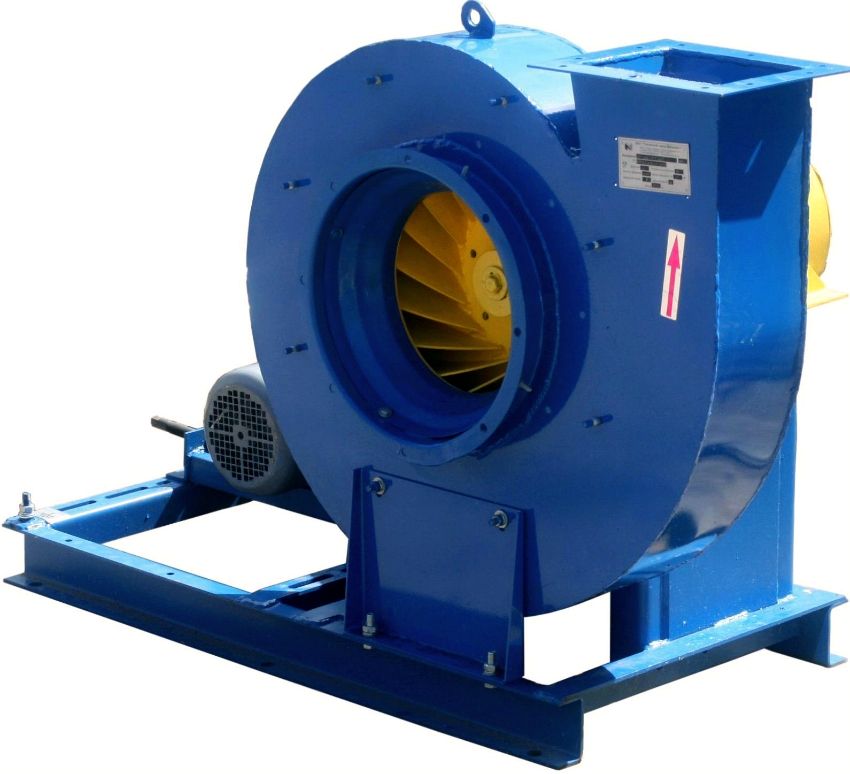 When choosing high pressure radial fans and other models, the installation location and the functions that the device should perform should be considered. For example, when it comes to organizing the discharge of air from a room in which work with explosive substances is conducted, it is better to give preference to explosion-proof models. And if you want to save energy, then you should buy an industrial axial fan with blades curved forward.

As a rule, a device for forced air extraction is installed at the entrance to the duct. The fixing device is made using dowels, which are threaded through holes in its case. When installing it is very important to fix the fan as tightly as possible. This can be done with silicone sealant or foam.

Helpful advice! When installing a channel fan electrical wiring is best carried out through a special channel. 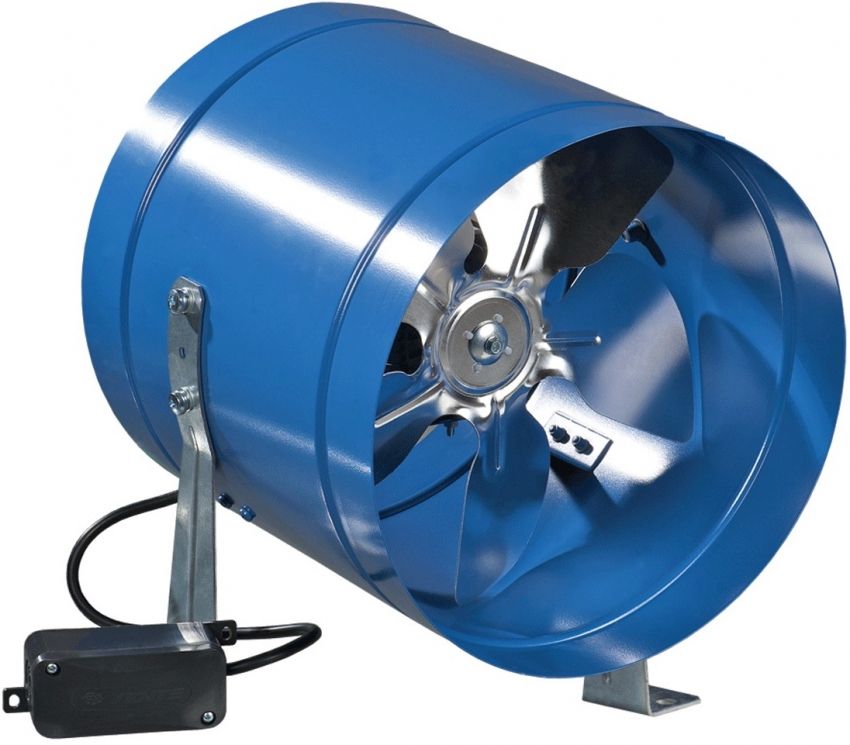 Prices for air extraction devices depend on such factors as power, size, body material and many others. Approximate cost of fans for round ducts:

At the same time, the price of a duct fan 200 mm in a plastic case can be significantly lower than an instrument with the same diameter, but in a steel case.

Systemair duct fans – products of the Swiss company, featuring a wide choice of models and modifications. Fans of this line are excellent for installation in various types of ventilation systems, are manufactured in galvanized steel casing and can boast high levels of durability and resistance to various adverse effects. They can be mounted both directly in the round duct and on the wall; they are characterized by high resistance to humidity, compact dimensions and low noise level during operation.

Helpful advice! Devices of the Systemair series are good in that they can be mounted at any angle, so these fans can be installed both on the walls and on the ceiling.

By purchasing a radial fan BP 80 75 or any other model, you provide an effective venting of air from the room. This allows you to get rid of high humidity, remove dust, combustion products or unpleasant smell from the room. Different models of duct fans can be installed in residential and industrial premises, require minimal maintenance and have a long service life.

Sink for kitchen from stainless steel is considered along with a plate for cooking,
A unique offer for you

Chipboard grooved waterproof: a new development in the market of building materials

Entrance door: dimensions, characteristics and features of the design selection

Pros and cons of self-leveling floors: reviews of the owners