The storm sewage system is designed to drain water from the local area, which naturally flows there with natural precipitation (rain and snow). At the heart of any drainage system are special containers, through which water flows. Trays for storm sewers vary in size and material, they are used to install one complete drainage structure on a country site. 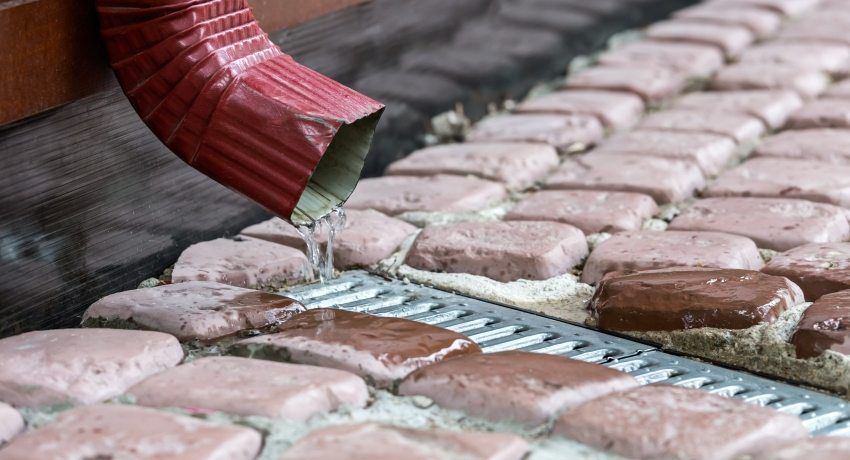 Device and types of storm sewer

The system of sediment removal includes a large number of components, each of which is designed to fulfill specific goals: 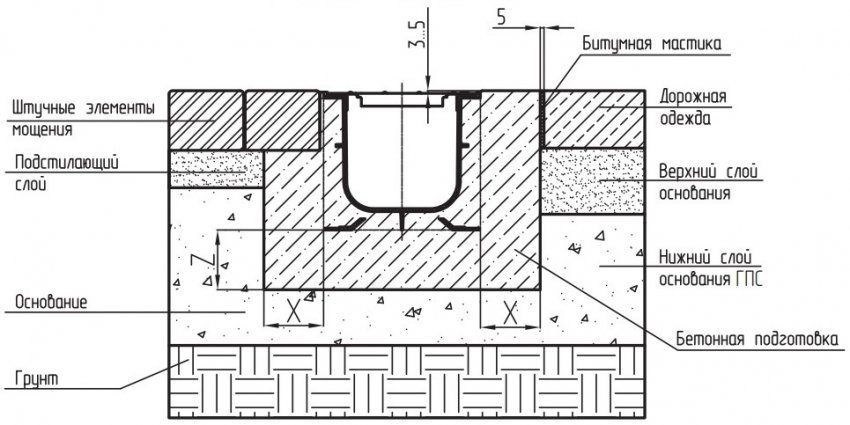 All these elements are simply combined into a single system, the type of which depends on the characteristics of the territory or personal preferences. Storm sewers can be laid at a shallow depth in the ground, or mounted on the surface.

According to the method of collecting water, storm sewers can be point or linear. In the first case, the storm water intake is mounted underground with access to the drain. The hole through which water enters the system must be protected by a special grate to prevent various debris from entering it. Linear sewage is mounted on the surface and is a trench of shallow depth created for the installation of drainage trays. In the second case, the grids for drainage trays are laid along the entire length of the system and perform the same protective function as in the point drain.

The point system is good in the case when rain or melt water needs to be removed only from the roof surface. If you need an effective drainage system from a large area, then the device of a linear system makes sense, since it can cover a large area, and its installation is relatively simple.

Note! When arranging storm sewers of any type, it should be borne in mind that the trays must be laid with a slope in the direction in which the planned drainage. 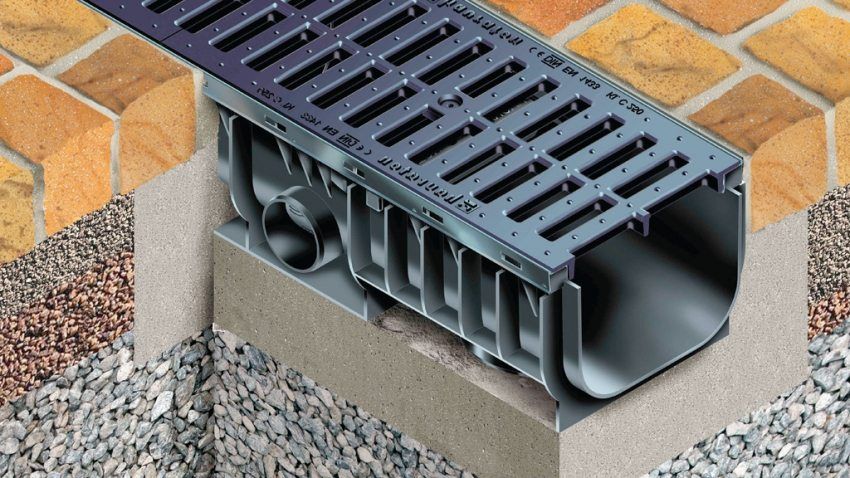 The construction of storm sewers from trays with their own hands is relatively simple, but for its implementation it will be necessary to make a number of calculations. These calculations will not only more accurately design the system, but also save money by acquiring exactly the number of elements that are required for the most efficient drainage system.

To calculate the storm sewer will require the following data:

You can choose and buy a drainage tray of the required type only if all these parameters are taken into account when designing the system, otherwise the storm sewage system will not be as efficient as possible. 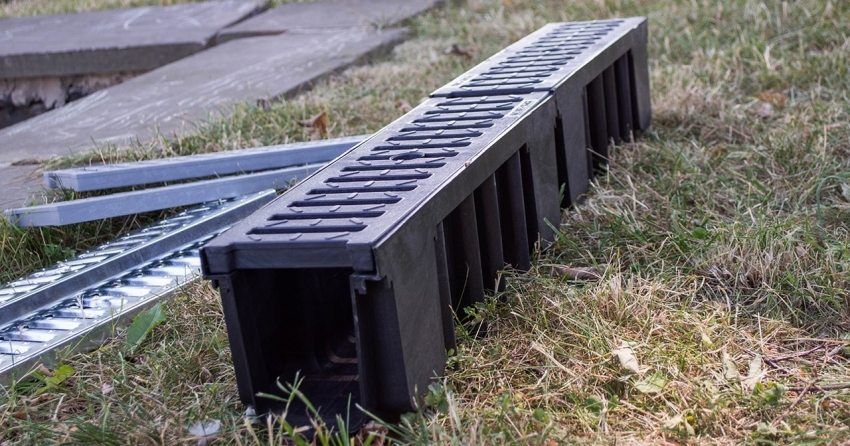 The volume of water that the system must divert is calculated by producing three factors: a numerical expression of precipitation intensity, surface area (from which water is required to be drained), and a correction factor. Data on precipitation can be obtained at the local meteorological station. The latter value is constant and depends on the type of coverage of the territory:

The depth of installation of drainage trays depends on the size of the product and the planned type of system. At the same time, it is necessary to take into account the presence of a drainage system in the territory: storm sewers should always be laid above it. The average depth of drain installation is usually 0.3 m for trays whose diameter does not exceed 50 cm, and 0.7 m for larger trays. 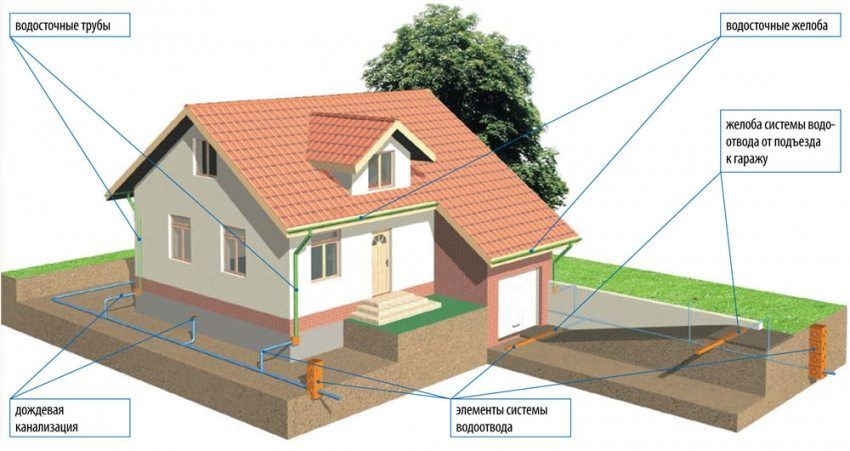 The main element of any type of storm sewage system are special trays, along which water is drained from the territory. They are made of various materials and differ in a number of characteristics, the most important of which is the maximum permissible load. In accordance with this parameter trays are divided into the following classes: 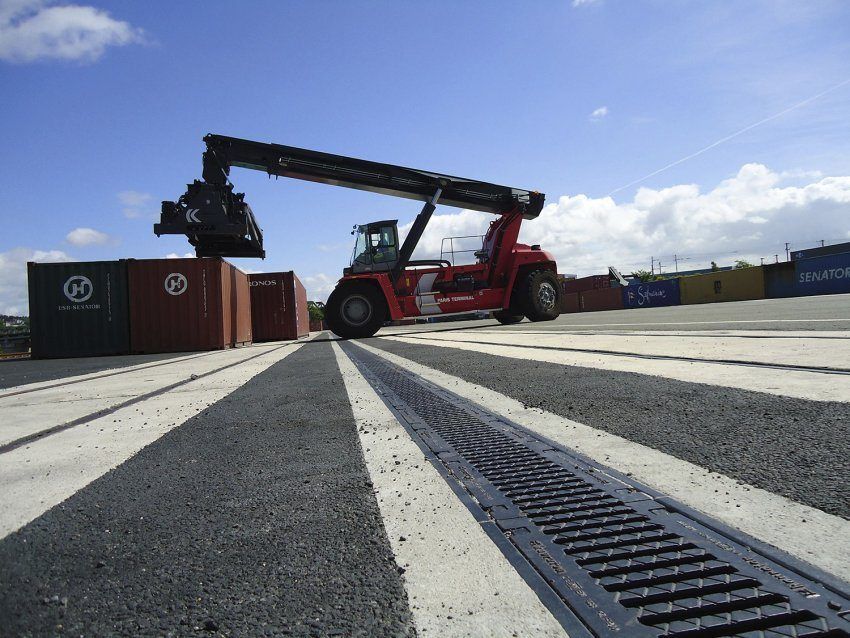 The second significant parameter by which the trays differ is their throughput. It depends on the hydraulic section of the structure, which is determined by its height and width.

As for materials, for the production of trays, the following options are used: 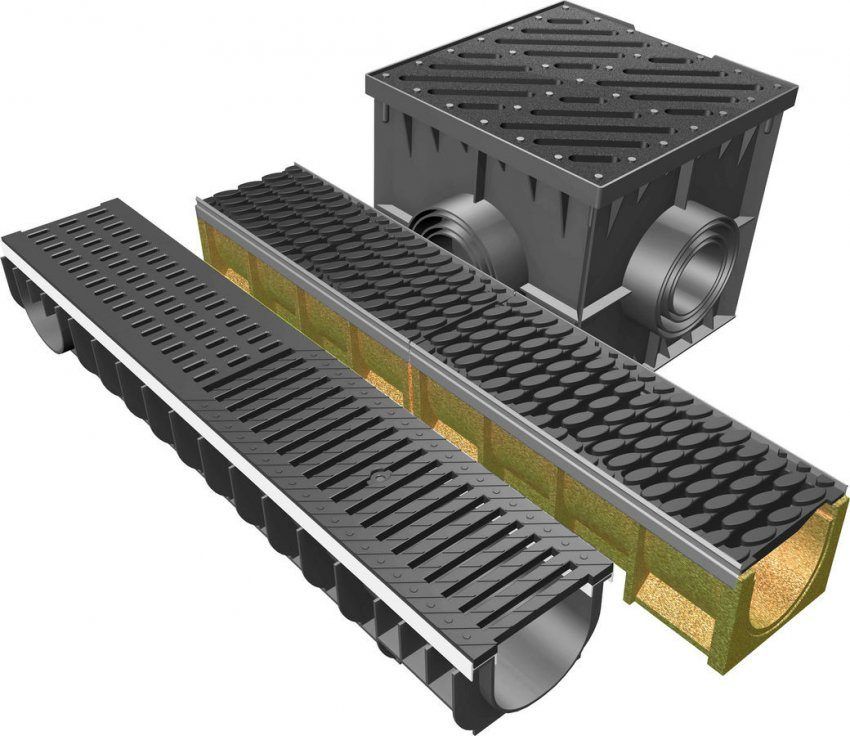 The use of concrete or RC drainage trays makes sense when it is planned to drain water from the territory, which is constantly subjected to heavy loads. It can be a busy freeway, parking and many other places. The price of concrete drainage trays is slightly higher than plastic, but lower than composite, and their performance characteristics are high.

In addition to the ability to withstand heavy loads, concrete products are characterized by increased resistance to various adverse effects and weather conditions. They do not rust, they withstand persistent exposure to chemicals, such as fuel. In addition, the simplicity of the design causes a long service life. As a rule, concrete trays are made with the expectation of draining large amounts of water, so systems based on them have a high throughput.

The disadvantages of concrete and reinforced concrete structures can be attributed to their great weight, which significantly complicates the installation of storm sewage on their own, this requires the use of specialized equipment.

Note! All versions of drainage trays of concrete products have special grooves that are combined during installation, which eliminates the possibility of leakage. This means that concrete trays can be simply connected to each other without the need for additional sealing of joints. 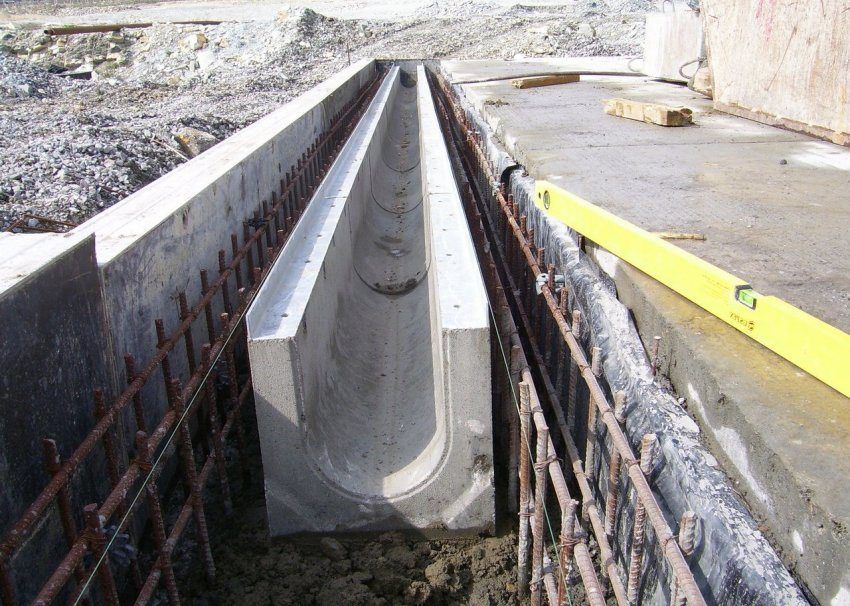 According to GOST, concrete drainage trays can be produced with different parameters. Thus, the width of the hydraulic section can vary from 100 to 500 mm, the height from 90 to 760 mm, and the length of a single groove is usually 1000 mm.

The use of plastic trays for storm sewers is often found in private construction, as well as in arranging park and garden areas, footpaths and other areas that are not subjected to heavy loads. This type is made of extruded polyethylene or propylene and has the following advantages: 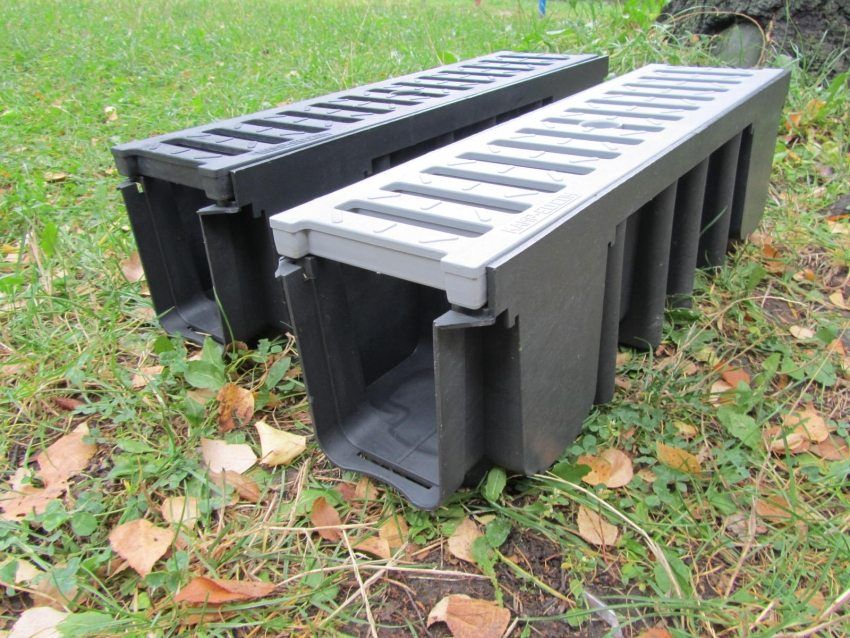 In order to increase the strength and durability of plastic structures, they are supplied with special figured ribs. Products may vary in color and shape. The grille supplied with a plastic drain pan is usually made of the same polymer or of lightweight steel. The second option is stronger and more reliable.

Before you buy a plastic drainage tray with a grate and proceed to the installation of storm sewage based on it, you should consider one thing. Due to the smooth surface of the material, plastic products have a higher permeability than other materials. This means that a water removal system based on them can be made with a smaller slope than from concrete or composite trays.

Sizes of plastic drainage trays can be different. The hydraulic section is usually from 70 to 300 mm, the standard length of one segment is 1000 mm. Weight can be from 1.5 to 20 kg, the maximum parameter is calculated complete with a metal grill. 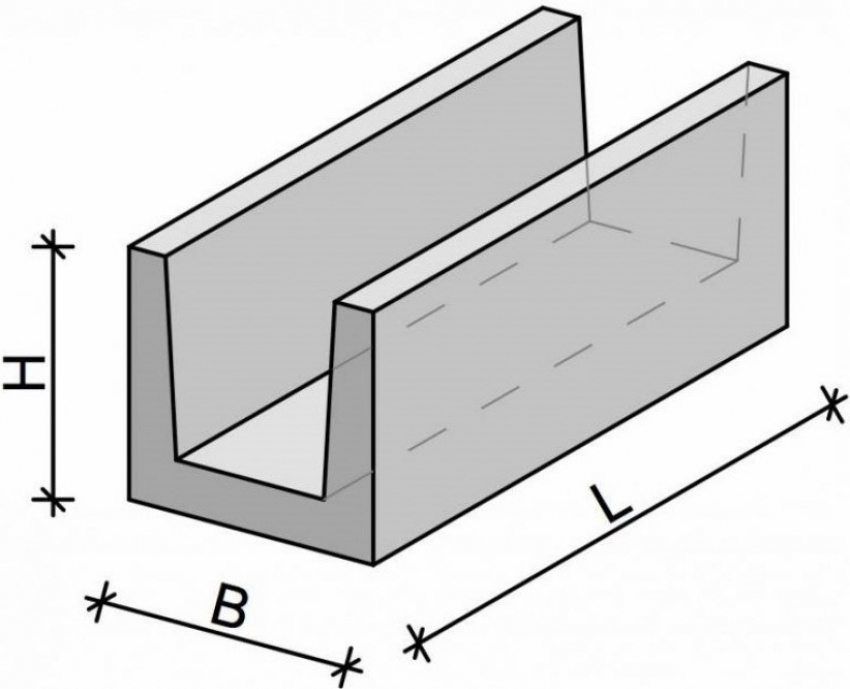 Composite gutters for storm sewers are manufactured in two versions:

According to their performance characteristics, composite trays are located approximately halfway between concrete and plastic. They can boast a lighter weight than the reinforced concrete trays for storm sewer, but not as light as plastic troughs. They are also characterized by increased strength and wear resistance, but are not able to withstand as much load as concrete. Like plastic products, they have a smooth surface that improves the permeability of the system.

In this case, to protect the system from debris, various types of grids for drainage trays are used: cast iron or plastic.

When installing drainage trays made of composite materials, the same special grooves are used as in the installation of concrete gutters, so additional treatment of the joints is not needed. The average price of the polymer-sand drainage tray is 430 rubles, the polymer-concrete one is 970 rubles. (in both cases, for the meter product without a grid). 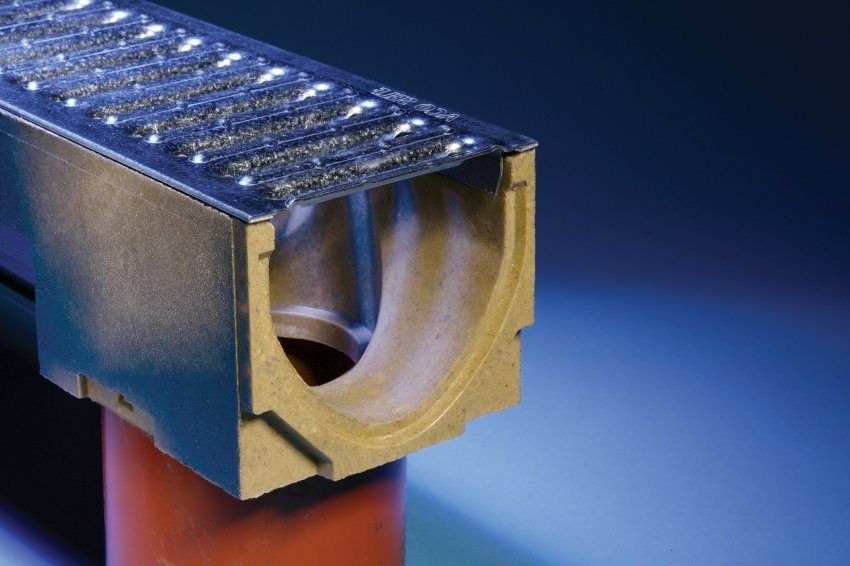 Metal drainage gutters are far from the most popular option, and there are a number of reasons for this. Metal is more susceptible to corrosion from regular contact with water. In order for such a product to last as long as possible, the metal layer must be sufficiently thick, which directly affects the weight of the structure. Usually cast iron is used as a material for the manufacture of metal gutters, which is very heavy. Accordingly, the installation of the system of metal gutters becomes impossible without the use of specialized equipment.

The price of trays for storm sewers made of metal is also significantly higher than concrete and even plastic. Therefore, use this option only when it is really necessary.

Helpful advice! A good compromise in this case is the use of gutters with steel bars. The price of a concrete drainage tray with a cast-iron grill is lower than that of an all-metal product, and the metal grille is characterized by an attractive appearance and long service life. 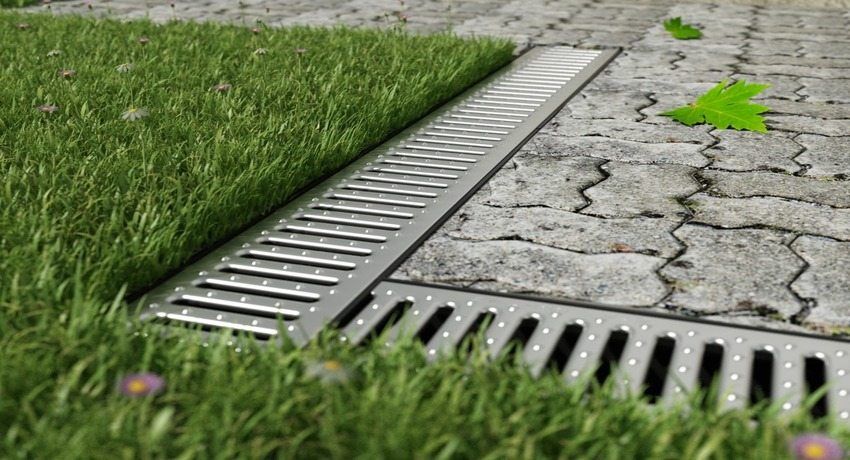 The price per unit of product depends largely on the material from which the chute is made. So, the prices of concrete trays for storm sewer vary from 1300 to 2500 rubles per unit and higher. The price of a plastic tray for storm sewer starts from 500, and reinforced concrete – from 1,800 rubles.

Of the advantages of self-production can be noted not only exactly the size you need concrete drainage trays, the price will also be much lower than when buying a finished product. However, if you decide to buy plastic drainage trays for storm sewers, this will definitely save your time. So the decision about whether to buy or make gutters personally, depends only on your personal preferences.

During electrical work, there is always a need to measure electrical characteristics: amperage, resistance
A unique offer for you

Lighting in the bathroom, photos of various options

Ceiling LED lamps for the home: the essence of harmonious lighting

Video door phones for private homes: an overview of the characteristics of the best models

Video door phones for the apartment: how to choose, install and use

Connection diagram of the LED strip 220V to the network: the correct installation of the backlight

Wooden floor – which one to choose? Floor or panels?

Infrared heaters: the pros and cons, prices of appliances