Today, the most acceptable for the cost of construction, is a septic tank of concrete rings with his own hands, the scheme of which is simply arranged. There is a significant amount of materials from which to make these sewage treatment plants independently. However, concrete rings, which are used for the construction of wells, make it easier to equip the suburban housing autonomous sewage system. What are the pros and cons of such a common decision, what is the cost and technology of construction, can we make septic tanks for giving without pumping out this way – we will look at this article. 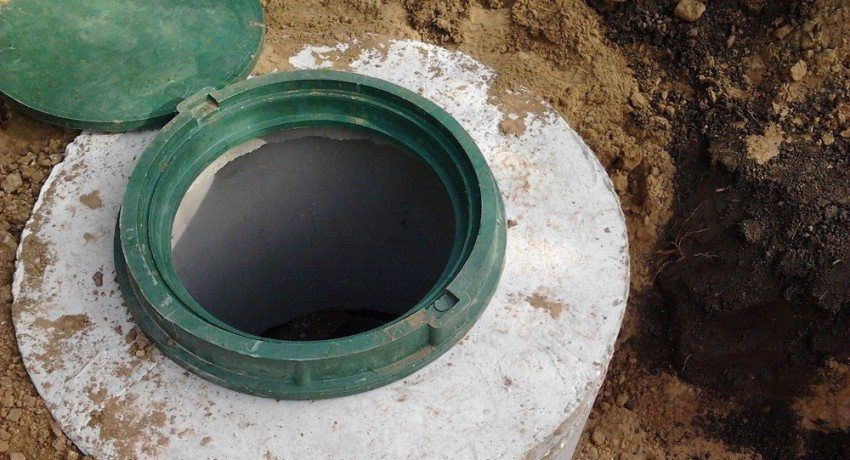 What are the advantages and disadvantages of concrete septic tanks

The material from which septic tanks are constructed for an autonomous system of sewage treatment does not particularly affect the principle of their work. In any case, they purify domestic wastewater by settling and filtering in layers of soil. However, differences in the qualities of a material allow us to endow the device with certain advantages: 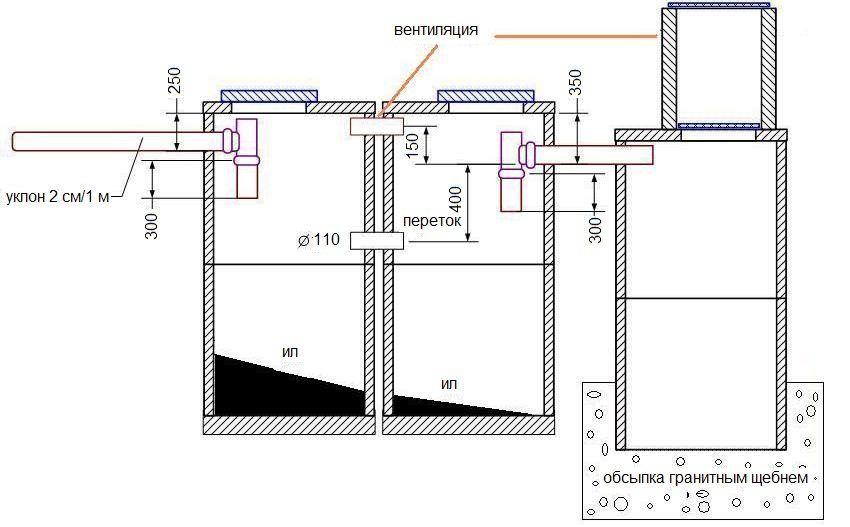 Of course, the cheapness of any project is due to the presence of certain disadvantages or inconveniences for the consumer. This is true with concrete rings. Because of their large weight, there is an urgent need to use technology to deliver these structures and lower them into a pit, the digging of which often also requires an excavator. You can save money, and significantly, if you dig with a shovel.

Helpful advice! In order not to spend money on a crane, concrete rings are descended from the car on a wooden ramp. At the same time trying to send them closer to the pit. For the descent into the pit, you can use the principle of self-immersion, which will be discussed further. 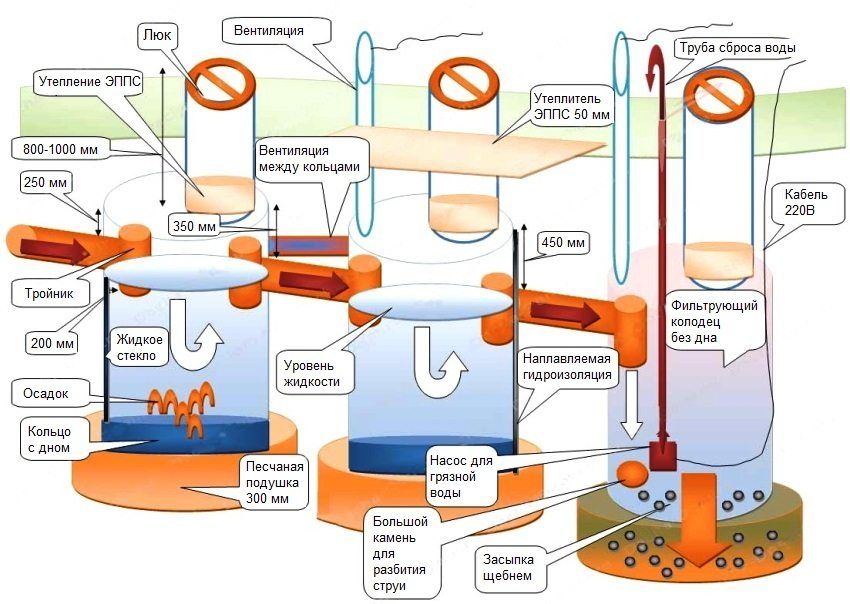 Concrete rings allow you to independently build a septic tank of any capacity and degree of wastewater treatment. The simplest option is a sump tank. It is the only hermetic container, the liquid in which simply accumulates and needs to be pumped out often. The volume of this container is governed by the number of rings used.

Standard rings made of concrete are in diameter, 100, 150 and 200 cm. The height of the rings is different, but rings with a height of 0.9 m are most often used. Accordingly, to calculate the volume of one element, you need to multiply the height by the square of the radius of the inner circumference and by the number P, equal to approximately 3.14. Those who are too lazy to do the calculations can remember that the meter ring gives a volume of about 0.7 m ?, a meter and a half about 1.5 m ?, and a two-meter ring a little more than 3 m ?. The second option assumes the presence of two cameras. The first is the upholding of effluent and settling to the bottom of more dense substances. The second chamber flows liquid according to the principle of communicating vessels. The bottom of the second chamber is not tight, and drainage is arranged under it. For this reason, the liquid goes into the ground. The first camera is usually made somewhat smaller in volume. The third scheme of a septic tank of concrete rings with their own hands suggests the implementation of a higher quality wastewater treatment. It has three cameras. In the second, suspended particles also settle, and in the third the water goes into the ground. This scheme cleans drains more reliably, but at the same time is more cumbersome.

Helpful advice! Sometimes the scheme of a septic tank of concrete rings with their own hands may suggest the device filter fields instead of the third tank. However, for this, the ground should be quite loose. 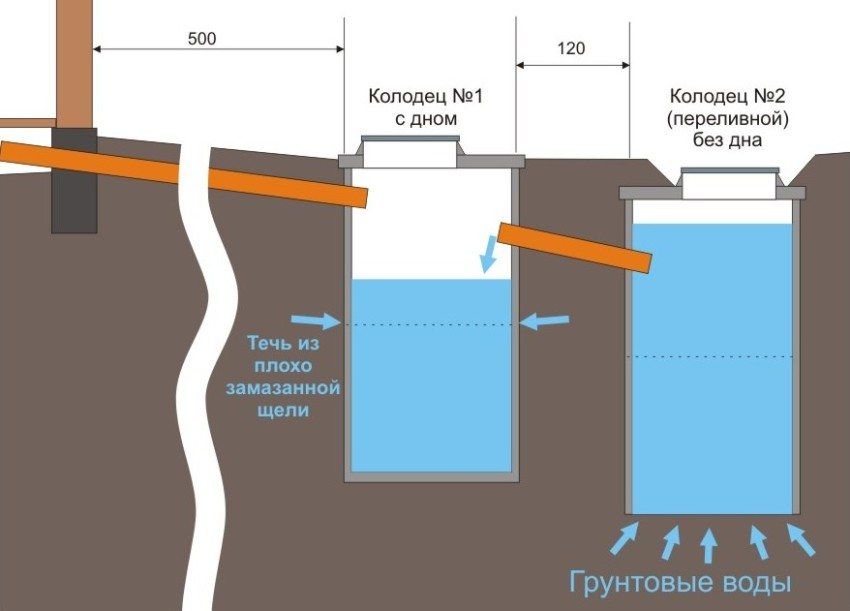 Consider the stages of work on the device septic tank with two cameras. The first will be a sedimentation tank, and the second is a natural soil filter. The total volume of the two chambers should be such as to ensure the reception of effluent in an amount equal to the volume of liquid coming from the house in 3 days.

It is established that each person spends 200 liters of water per day. So, for a family consisting of 4 people, the minimum volume of the septic tank will be about 2.5 m ?. All you need is two half meter rings. However, you need to take into account the depth of soil freezing. Therefore, you will need at least two rings that will be on top. Helpful advice! If there are a lot of people living in the house and the water consumption exceeds the above volumes, then you should not dig deep pits. It is not comfortable. It is much easier to add a third compartment, having concreted the bottom in the second.

The scheme of a septic tank of concrete rings with their own hands involves the work of concreting the bottom. It is not produced only in the last well. For concreting, it is necessary to firmly tamp the bottom and pour a layer of rubble 5 cm thick there. Then we put the reinforcement and fill it with another 5 cm. A common layer of the screed will be 10 cm.

A feature of trenches for sewer pipes is that for each subsequent pipe, the trench will have to be dug deeper by 20 cm to ensure a height difference. Therefore, the depth of the wells themselves is the greater, the greater their sequence number.

If you do not have the time or elementary building skills, you can order the installation of a septic tank of turnkey concrete rings. The cost of the work performed will have to be added in this case to the total construction budget.

This article discusses in detail this type of decoration, as wallpaper for a child’s

Two-level plasterboard ceilings, photos of which can be found in large numbers, are the
A unique offer for you

The floor under the linoleum on the concrete floor: preparation and laying

Greenhouse for cucumbers with their own hands: photos of the best solutions for the dacha