With the independent construction of suburban housing, everyone wondered how to make water heating of a private house with his own hands, he looked for schemes for possible structures everywhere. Today, there are many different options for water heating home systems. They can be easily divided into just three main types. Equipment and materials for all of them are used the same, but the design is different. What are the main differences and what are the advantages of each system? 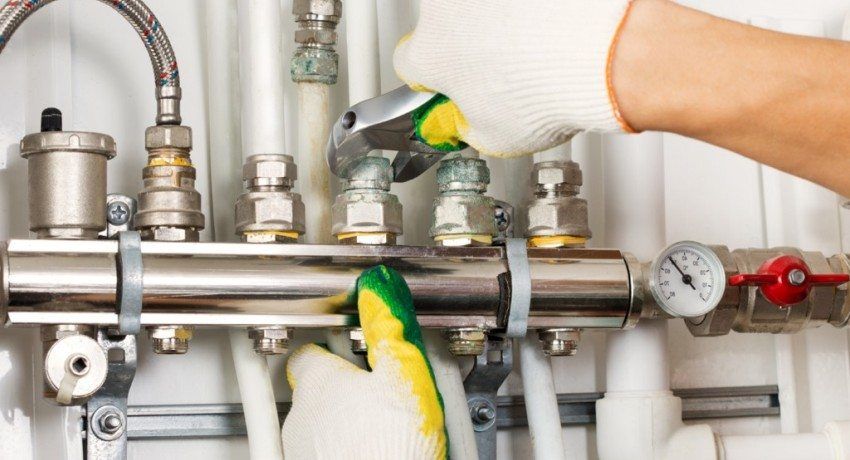 Features of installation of water heating

The use of water as a heat carrier is due to the fact that this liquid has a very good heat capacity and is able to efficiently receive and give off heat. Water heating has been used in homes for a long time. Since then, the principle has remained the same, but the wiring diagrams for the heating elements have undergone a serious modernization. However, for the construction of water heating all the same materials and devices are used as a hundred years ago, only the improved ones: 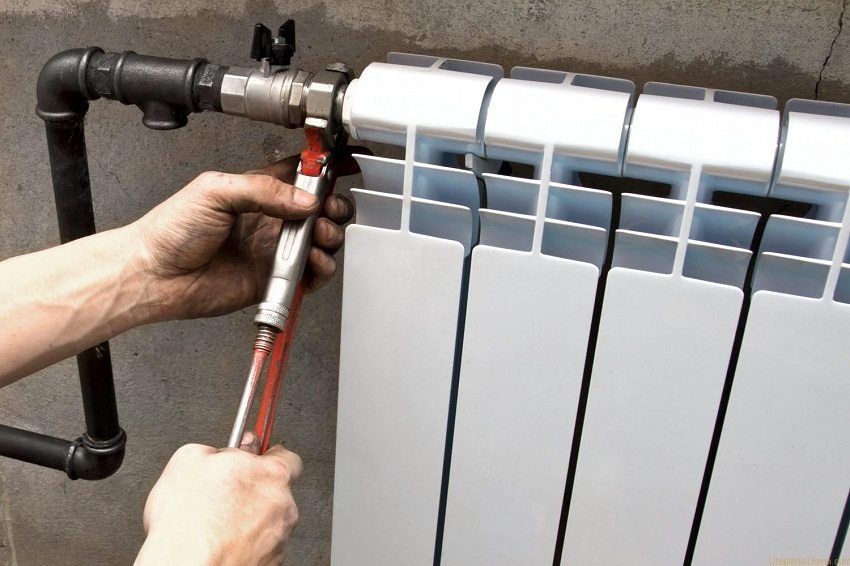 This is almost an exhaustive list of the equipment that will be needed in order to make water heating of a private house with your own hands. There are three schemes for installing and connecting radiators: 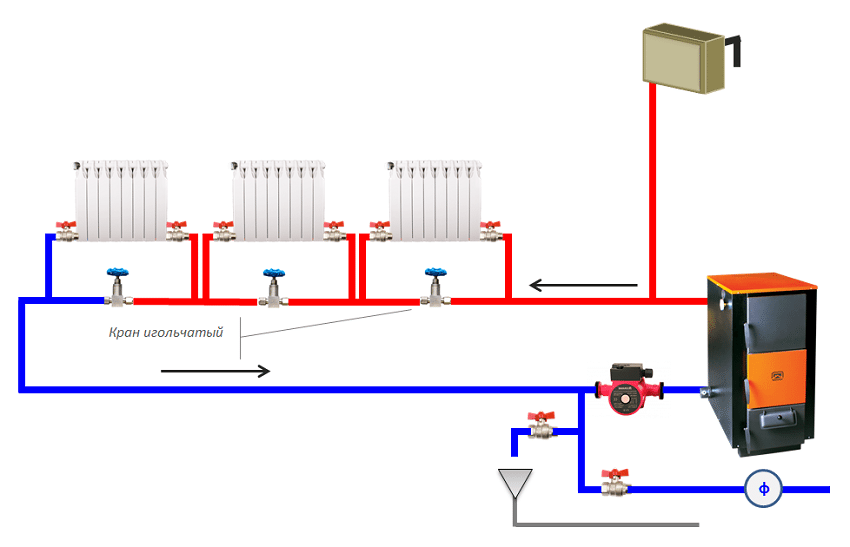 According to the type of coolant supply, all schemes can be divided into heating with natural water flow and forced. Natural circulation is carried out due to changes in water temperature. Hot liquid rises, as it has a lower density, and cold flows down. The forced circulation type occurs due to the pumps that are installed in the pipeline or are located directly in the boiler.

In order to make water heating of a private house with your own hands, installation schemes need to be studied in detail. However, the first step is to stock up on all the necessary materials and equipment, the need for which is calculated in advance, depending on the type of battery connection. 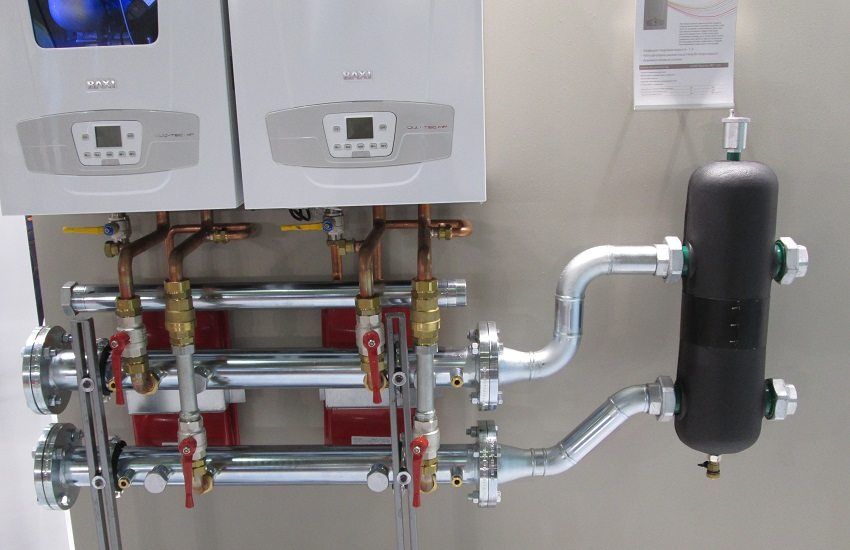 Helpful advice! Buy boilers, batteries and other equipment only from reputable manufacturers. Cheap analogs do not always meet the requirements and can be dangerous.

The easiest way to connect radiators to the boiler is to build a one-pipe heating system. Scheme This design assumes the presence of only one pipe, laid along the entire perimeter of the house. It comes out of the supply pipe of the boiler, and enters the reverse. Outlets from this pipe go near each radiator, to which it is connected through shut-off valves or directly. 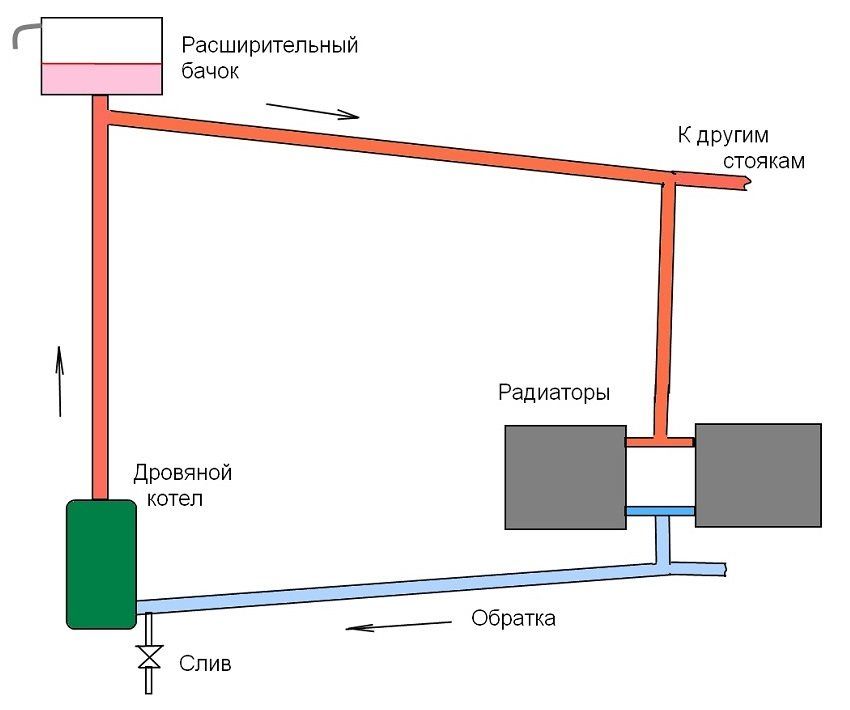 Such a device is not only the simplest, but also the cheapest, both in terms of materials and installation. The use of a single pipe eliminates the need to manufacture a plurality of pipe outlets, and various little things are spent much less. It is no secret that these fittings at a cost constitute a significant part of the cost of all the heating in a house. The use of a one-pipe heating system, the scheme of which is simple, is justified in small houses with an uncomplicated layout of the rooms, as the water passes through the entire ring and has time to cool down considerably. In this regard, the last radiators on its way heat up much less than the first ones. Therefore, if the building is large, by the end of its route the coolant will lose all its energy and will not be able to heat the last rooms. This is especially true of the natural type of water circulation. 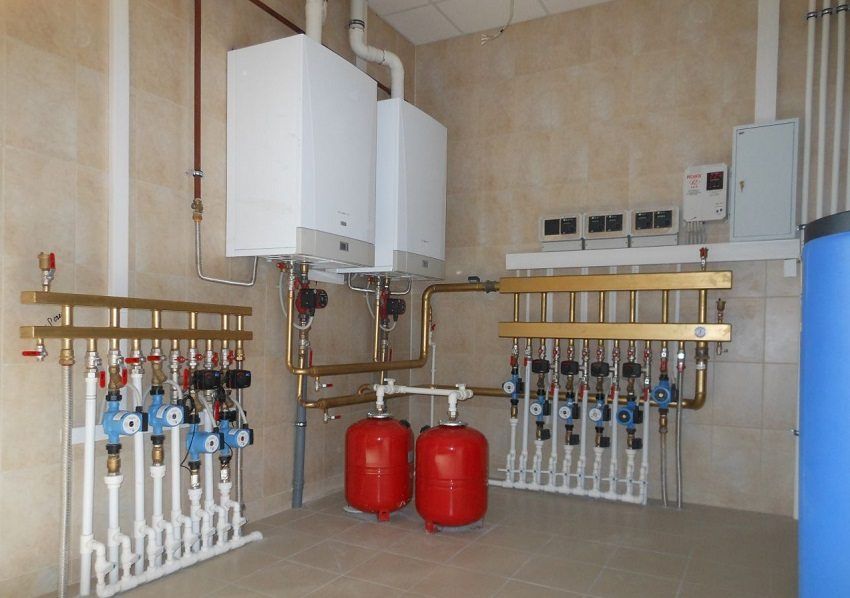 When constructing a one-pipe heating system, the design scheme should assume a slight slope, of the order of 3 to 5 degrees. This will ensure more efficient operation of the entire structure. In addition, all radiators must be equipped with air taps, which are needed to maintain a stable pressure in the system by bleeding air. These faucets have small holes and are twisted off with an ordinary screwdriver. 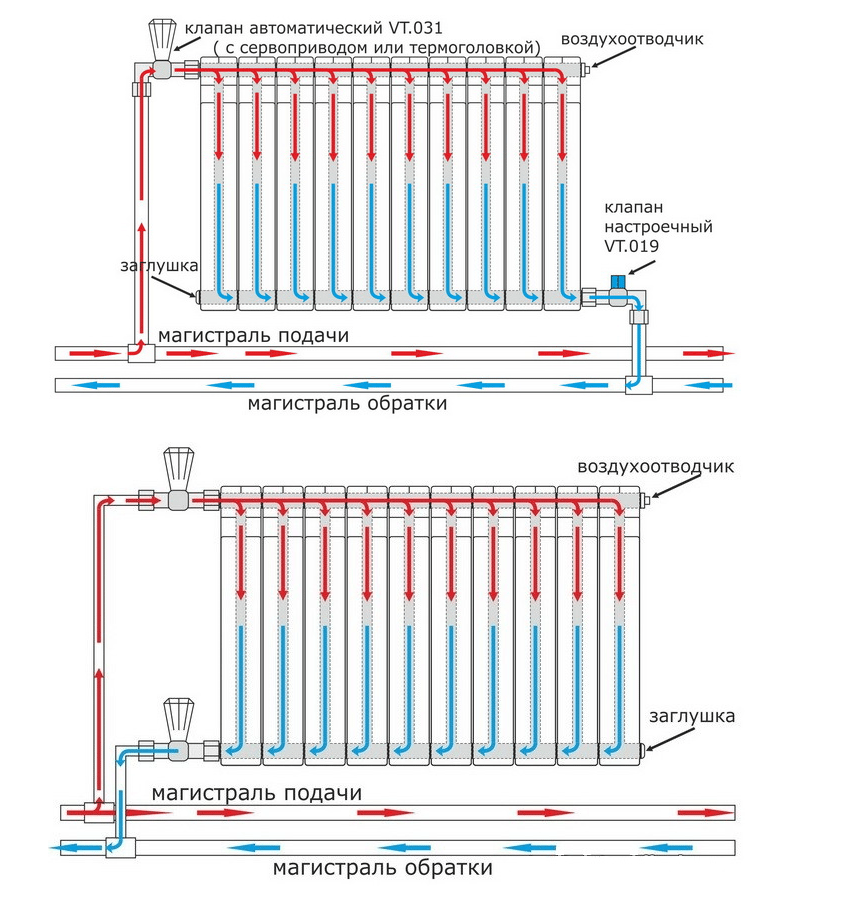 Helpful advice! When it is necessary to clean or replace the battery, you can not drain the water and do not stop the entire system, for this you need to use Mayevsky’s taps. They connect the radiator to the pipe bends. If the battery needs to be removed, the taps can simply be closed.

Unlike the previous one, the two-pipe heating system, the scheme of which assumes the presence of two pipes: supply and return, is more complex in the device. It is designed in such a way that the supply pipe enters directly into each battery, and the return pipe goes out of it. This is also called a parallel device, since all radiators are connected to the boiler through pipes, not in order, but in parallel.

A two-pipe heating system, whose scheme is more complex, requires a larger number of pipes and connecting fittings. Therefore, it is more expensive. At the same time, it is more efficient, since all the batteries heat up equally, regardless of their location, near the boiler or in the farthest room. Such wiring is most often used in two-story houses and cottages. 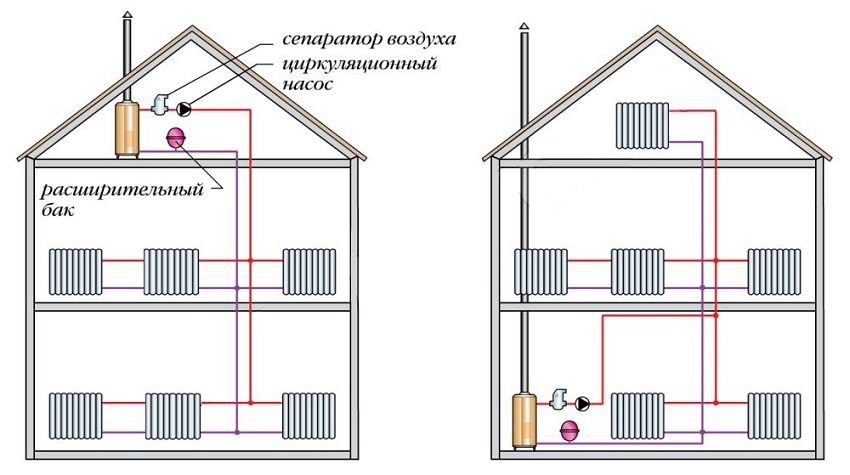 An important advantage of such a device is that each battery functions almost independently of the others, since it has its own circuit. Therefore, it can be easily replaced or repaired without affecting the rest of the structure. Due to the fact that the two-pipe heating system has a parallel radiator connection scheme, it is very easy to regulate temperature and pressure in them, which will provide additional savings of fuel resources.

Helpful advice! When using a two-pipe heating system, it is advisable to use a circulating pump. It will significantly increase the efficiency and speed of heating the batteries. 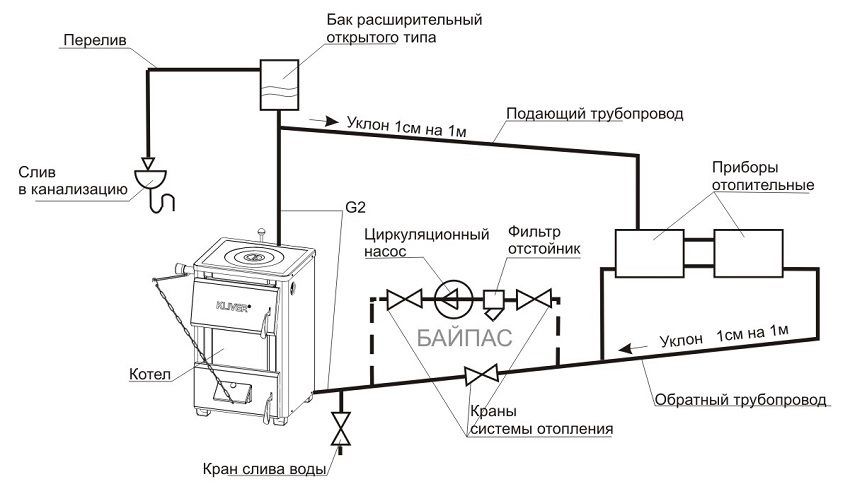 Another type of wiring is collector. This is the most complex system, involving the use of a large number of different pipes and special distribution devices, called manifolds. The principle of the system with a collector heating scheme of a one-story house with forced circulation is that boiling water from the boiler goes to special collectors, which serve as distributors between different radiators. Each battery is connected to it by two pipes. Such a system, with its effectiveness, can not boast of cheapness. It can regulate the temperature not only on each circuit, but also on each battery, which allows you to create your own temperature in any room. 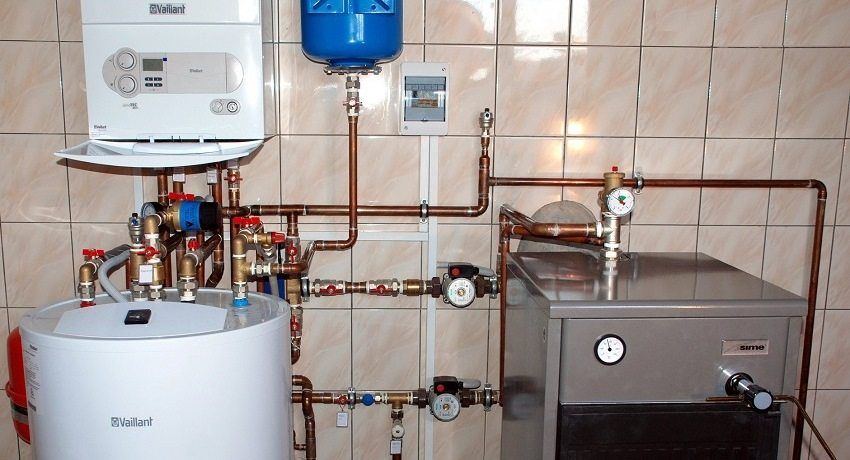 Such a heating scheme is made for a one-story house with forced circulation, since naturally the water cannot effectively circulate through numerous pipes and manifolds. The essence of this scheme is that right next to the boiler a centrifugal circulation pump crashes into the return pipe, which continuously pumps water through the impeller. Due to this, the system generates the pressure necessary to completely pump the entire line, heating all the batteries evenly. If you have purchased an expensive wall-mounted automatic boiler, then it is likely that a circulation pump has already been installed in it, which is set to the optimum pressure for this boiler. If you have a simple boiler, then when buying a centrifugal pump, you should consult about its compatibility with the pressure created with this boiler in order to avoid an emergency. 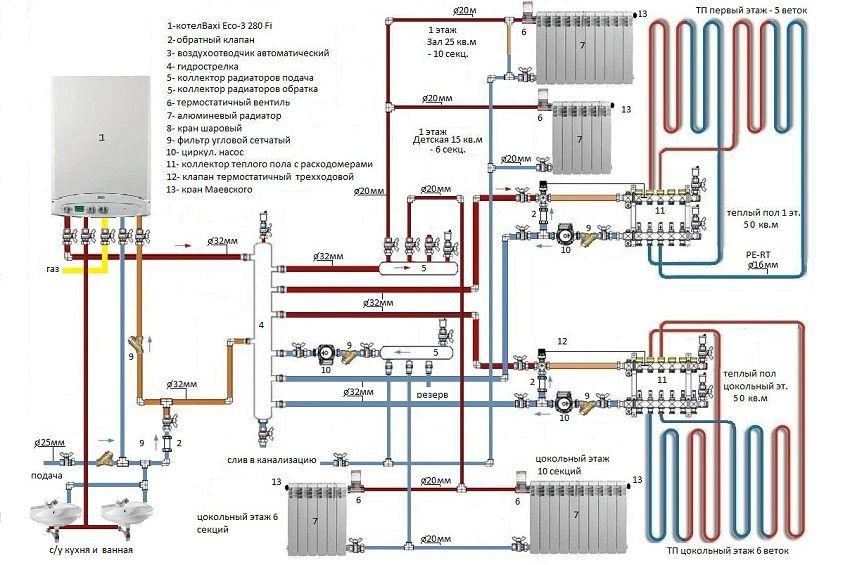 The collector scheme is rarely used in two-story houses, as it, although effective, is very cumbersome. The layout for the two floors will be too complicated. That is why it is in demand only in the heating scheme of a one-story house with forced circulation.

Helpful advice! For the device in your suburban private house collector water heating system, you need to take care of purchasing the required number of thermostats and shut-off valves. This will allow you to adjust the climate in the house in semi-automatic mode. 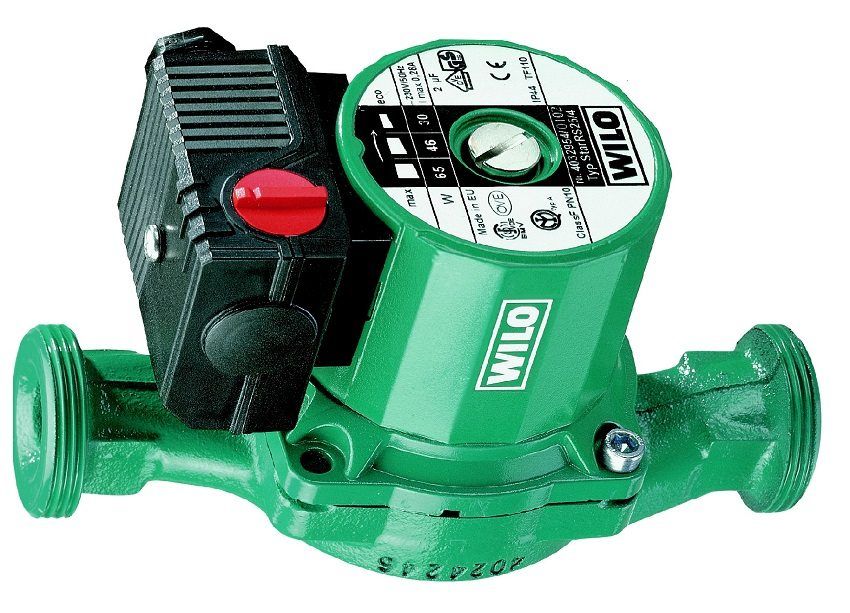 Summarizing the above, it can be noted that the choice of the three existing types of water heating wiring should be carried out deliberately. In a small one-storey house, only one pipe can be laid. This scheme is also called “Leningrad”. If the area of ​​the house is significant or it is two-storeyed, then it is better to make a two-pipe heating system with a return pipe. To create a modern and efficient heating system in your house, you can mount it according to the collector scheme. It will cost more, but its efficiency will be much higher. The main thing is that any created system should always work well and reliably in any, even difficult, conditions. To do this, you need to build it according to all the rules and recommendations.

Disk on a tree for the Bulgarian: choice of the suitable tool

Mosquito net on the door: a multifunctional element of protection of the room

Why do I need a grid for plastering the walls of the facade?

Front door with a thermal break and its technical characteristics

Bar stool for the kitchen: a necessary piece of furniture for racks

Waterproofing a bathroom under the tile: which is better? Device and materials, do it yourself

Electric wiring in the apartment: charting, rules and work algorithm