To create a favorable microclimate in the room, it is necessary to maintain a comfortable temperature and not allow walking drafts. This is especially true for crowded places where doors open very often. To keep the internal heat, to get rid of drafts and to exclude the likelihood of cold contaminated air entering the room will help the thermal curtain on the front door. 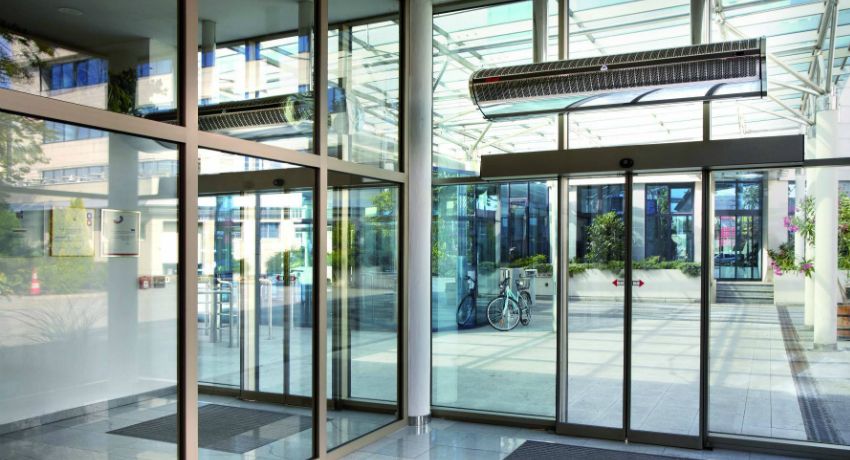 What is a thermal curtain and why is it necessary?

In the winter period of the year, the dense cold air, which spreads along the floor, rapidly goes into the room through the front door and squeezes out the warm, light air. If a wind component is added to such an ordinary air exchange, then strong drafts will walk around the room. In this case, when the door often opens or is constantly kept open, not a single heating device can cope with the heating of the room. Here it is necessary to create a powerful stream of warm dense air, the pressure of which would prevent the pressure of the cold air masses coming from the street. 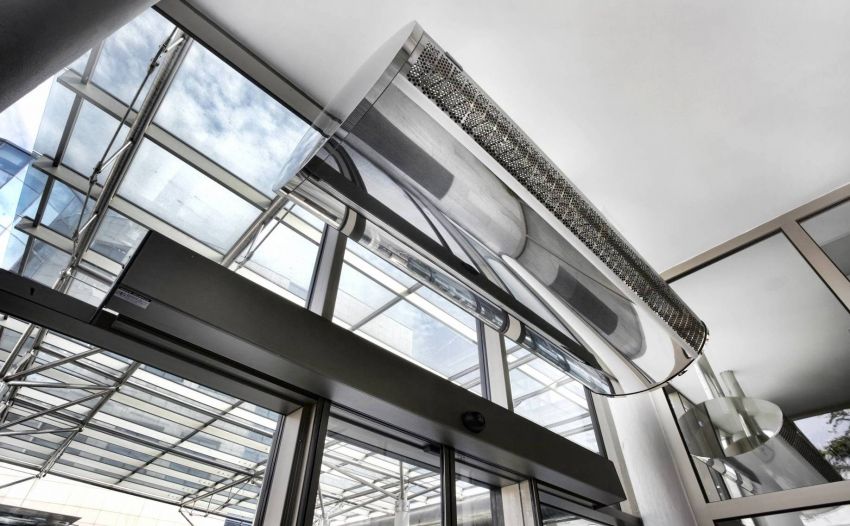 The thermal curtain perfectly copes with the task. It is a kind of cold air cutter at the entrance doors. The principle of its operation is similar to the operation of a heat fan. It is able to reliably protect the room from the penetration of drafts and cold from the street, and its inhabitants from diseases.

In the case of the correct calculation of all parameters of heat flow, it will not only prevent the penetration of cold masses and will not allow to get out heated, but also helps the heating system, due to the fact that most of it returns to the room.

The air curtain can be used not only in the winter season. Her work is also justified in the summer season. The directional air mass prevents the cool internal air to go outside, and the heated street heat – to enter the room. 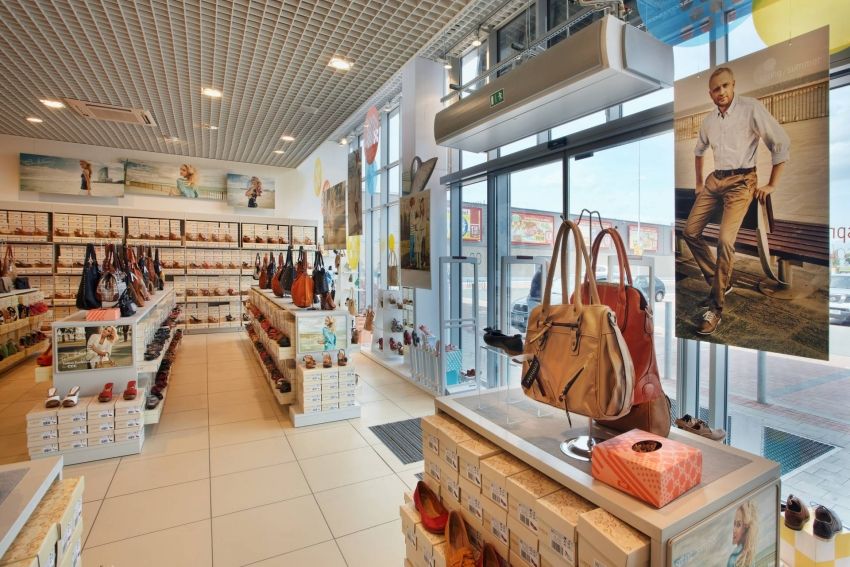 Regardless of the season, the veil has another important function. It protects the internal microclimate of the room from penetration, together with the outdoor air, of various harmful substances to human health. The veil is able to keep rain, snow, dust and a horde of small insects.

Helpful advice! The air curtain allows you to zone the premises, creating a different microclimate.

Properly chosen equipment can save about 30% of electricity, which is spent on heating and air conditioning of the room. In addition, the device itself does not occupy much of the useful space and does not clutter up the interior of the room. 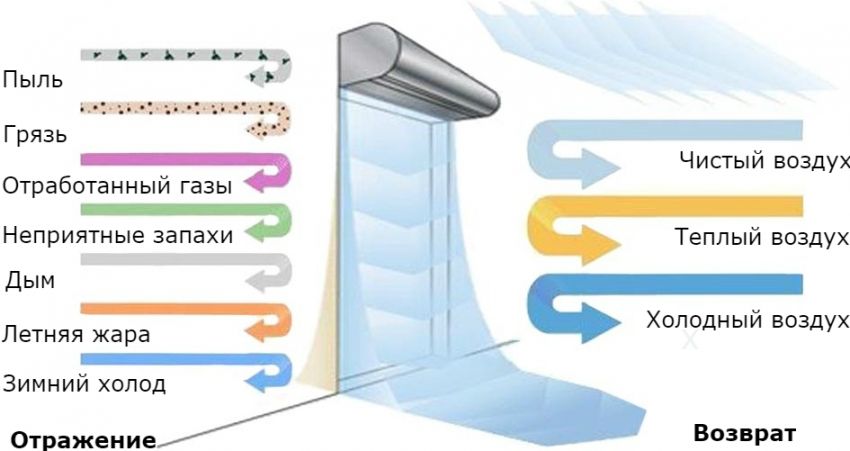 In appearance, the thermal curtain resembles an indoor unit air conditioner with a pronounced elongated body. Air is taken from the room through the grill located in its upper part. From the bottom of the case there is a nozzle through which air flow comes out under pressure. The control buttons can be located on the case itself or be mounted in a remote unit, which should be located near the device. Some air curtain models have an infrared remote control.

Inside the case there is a heat exchanger, due to which the air is heated, and a turbine-type pressure fan, which carries it under pressure to the outside. As a heat exchanger can be heating elements, a spiral or a circuit of water heating, which is typical for stationary models.

Many thermal curtains have a built-in filter designed to clean the air mass from contamination. Almost all models, regardless of the manufacturer, have built-in protection against overheating, breakdowns on the case and short circuits. They can also be equipped with thermostatic control of fan speed and heat exchanger heating level. 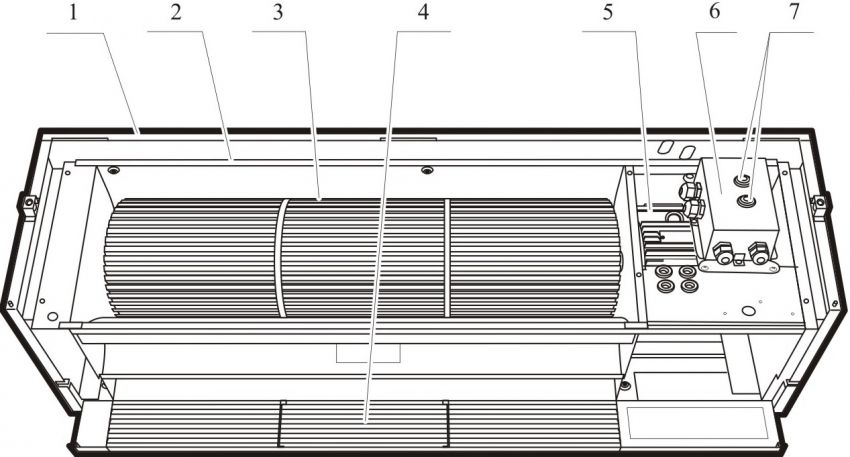 There are many types of thermal curtains, reviews of which can be found on specialized sites. They all differ in installation method and principle of operation.

Depending on the installation of the curtain can be:

The horizontal device is installed directly above the doorway, window or gate, and is fixed with brackets or threaded rods. The vertical thermal curtain is mounted on one or both sides of the door. The height of the device should occupy three quarters of the height of the doorway. Horizontal models are more bulky and not suitable for small spaces. Universal curtains can be installed both vertically and horizontally. It is this mobile design that is the most sought-after, as it is a full-fledged additional heating element. It is often used for office space and apartments.

Important! Horizontal devices are not designed to be installed vertically. 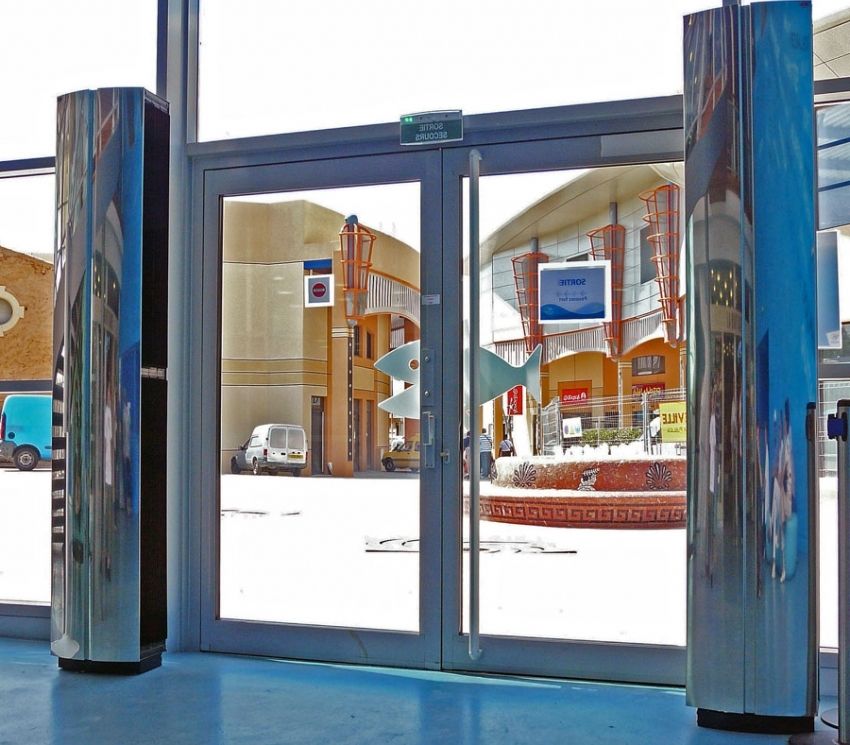 By type of installation there are suspended and embedded models. The first option is attached directly to the wall. The second is built into the wall or ceiling at the height of the opening. Such models consist of a module and a decorative lattice.

Depending on the availability and type of heat exchanger, there are curtains: 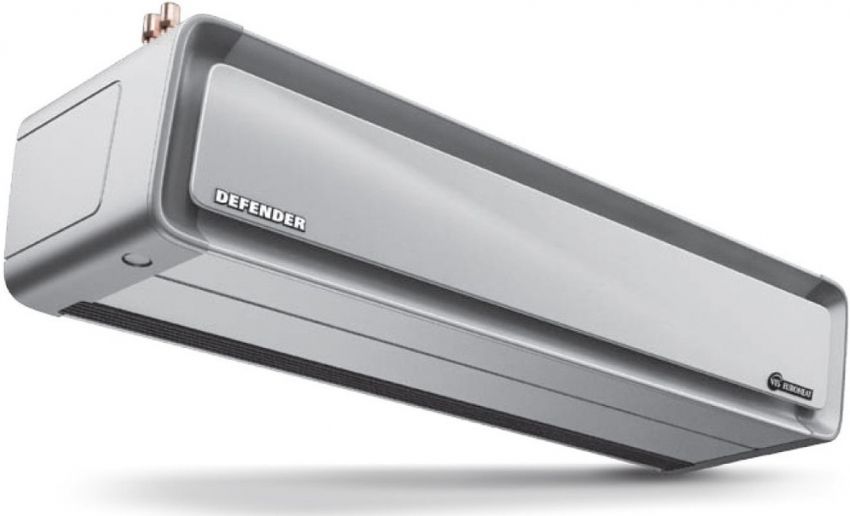 The most popular and demanded are air electric heat curtains that operate on 220 V. These devices have high efficiency indicators and are easy to install. Many models are equipped with the ability to smoothly adjust the temperature of the heating air flow. The main drawback of electric curtains is the significant energy consumption associated with the operation of the fan and the heating of the heat exchanger. In addition, the devices have a certain inertia at startup, i.e. to exit the veil on the operating mode, you need a certain time.

For water thermal curtains on the entrance door, having a serial designation RW, hot water acts as a heat carrier. The devices are connected to the heating system or centralized hot water through the pipes, which are located in the body of the curtain. The main advantage of this type of device is minimal operating costs. Here, electricity is spent only on the operation of the fan and control system. However, the device is characterized by a lot of difficulties during installation. Here it is necessary to mount pipes with valves and control valves. 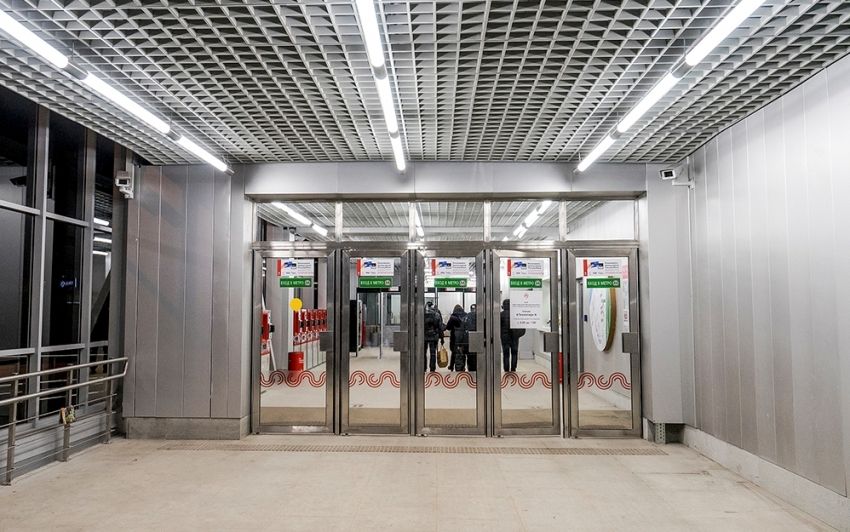 Air curtains without heat exchanger of the RV series are not used for heating air. They are used to protect the premises from the ingress of street dust, insects and various contaminants. They also prevent leakage of conditioned air to the outside. They are often used for zoning premises in production shops, to prevent warm air from entering storage or freezing chambers.

As a heat exchanger, TEN, a spiral or a ceramic heat exchanger can be used here. Spiral devices are the cheapest and at the same time thin. You can buy a heat curtain over the door for 4000 rub. Due to the fact that the heat exchanger is of an open type, it very quickly heats up the air flow, leaving for the operating mode. However, such a heating element burns oxygen. Spiral curtains are characterized by a minimum service life.

Helpful advice! It is advisable to use devices with a spiral for rooms with a high rate of air exchange. 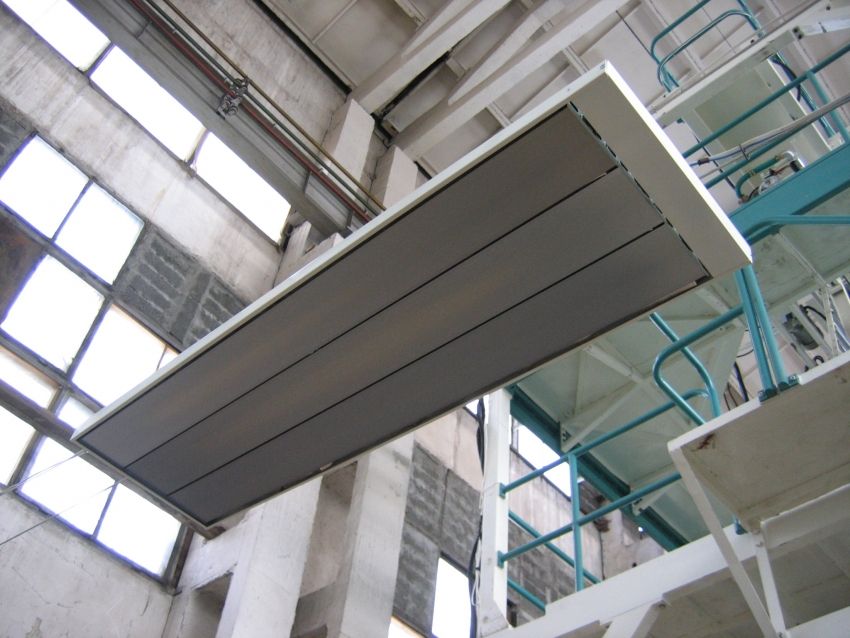 More effective are curtains with heating elements. It is a metal tube, in the middle of which is a heating element, wire or graphite, and sand. These devices do not burn oxygen indoors, they work long and smoothly. Stand out at affordable cost. The average cost of a heat curtain is 20 thousand rubles.

The most modern are thermal curtains with a ceramic heat exchanger, which quickly heats the air to the set temperature and switches to an economical mode of energy consumption. This device not only performs the task, cutting off the outside cold air, it allows you to significantly save energy. The disadvantage is the high cost of the heat curtain in comparison with analogues.

Electric thermal curtains are serially designated RM, RT and RS, which indicate the purpose of the device. Low-power mini-veils of the RS series are used for small openings of 1500×80 cm. Their capacity is no more than 500 m? / Hour. Curtains are usually installed in transport ticket offices, street kiosks, or above customer service windows. 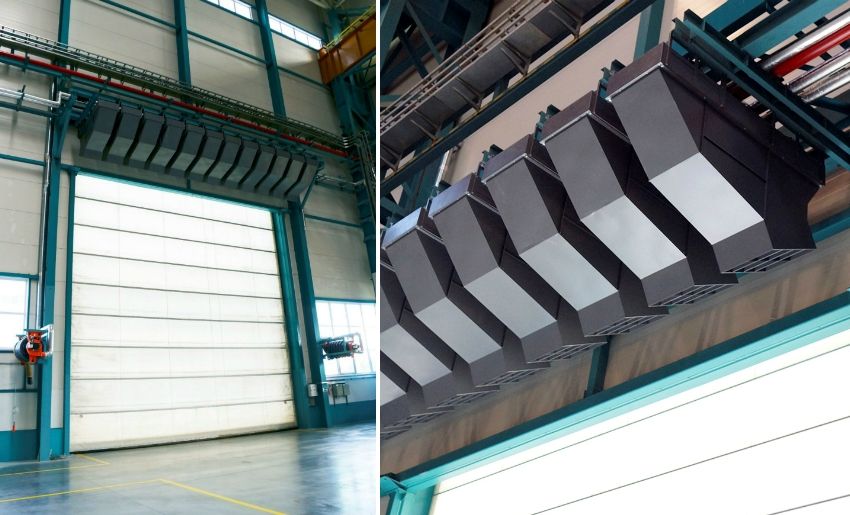 The most popular are the medium power curtains of the RM series, which are used for standard openings 2.5-3 m high. Can they pump up to 2000 m? air per hour Models usually have convenient remote units and remote controls. Such devices of the middle class are often used for the front door or to move from a cool hallway to the living room.

Only a properly selected and duly installed heat curtain will be able to work effectively and fulfill its purpose. A routine maintenance will help extend the life of the device.

The opportunity to decorate the house with colorful lights, not only inside but also

Making an expensive purchase, everyone wants to be confident in the correctness of their
A unique offer for you

Technology of roofing of metal

Building a house from scratch: where to start and how to build it yourself, step by step instructions

What peat toilet to give better purchase

Decorative plaster for interior walls and features of its application

Landscape design of the suburban area of ​​10 hundred parts with their own hands: photos of exemplary projects

DVP: what is it? How to choose a building material

What windows are there, what is worth knowing about them, what is important