In some homes, even in extreme cold, you can see open vents. “To drown the street” during the time of the mass installation of meters is an unwarranted luxury. To maintain a favorable temperature in the room, use a thermostat for a heating radiator. With this mechanism, you can achieve a comfortable environment in the house, simultaneously saving a considerable amount on heating. 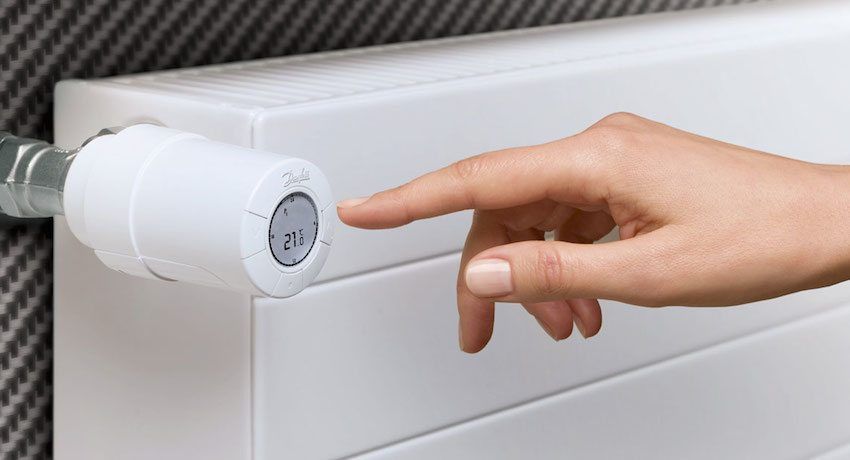 The principle of operation of the thermostat

There are two methods of regulating the indoor microclimate – qualitative and quantitative. In the first case, the water temperature itself changes in the system. This is done with the help of a mixing unit installed in the boiler room. The quantitative method implies control over the flow of coolant into the battery. This is the main function of the thermostat for the heating radiator.

When the ambient temperature rises in the electronic device, a special thermoelement is triggered, partially covering the valve lumen. The flow of hot water decreases and the battery cools down. When the air temperature drops, the process starts in the reverse order. All operations are performed without human intervention. 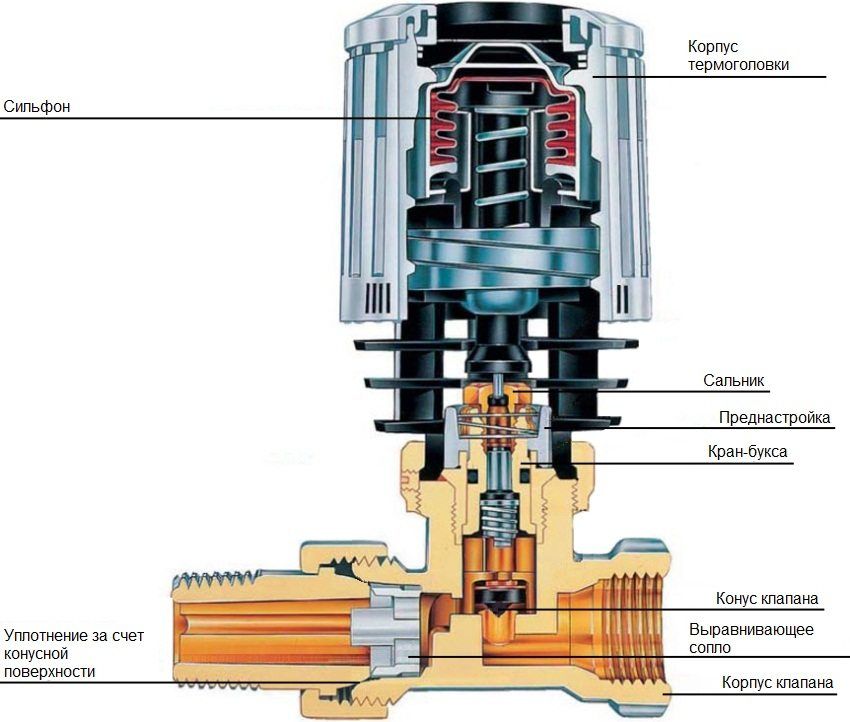 Installing control devices in front of radiators provides not only temperature control, but also the resolution of emergency safety issues. If the battery has leaked, requires replacement or repair, it can be disconnected from the system with one turn of the crane.

It is suitable only for disconnecting the battery, since it operates in two modes – “open” and “closed”. As thermostat for radiator heating – ineffective. The shutter can not be kept half open. The reason is that the ball element of the crane, standing in an intermediate position, gradually becomes useless. It is damaged by solid particles circulating through the pipes along with the coolant. They inevitably leave scratches on the polished ball, as a result of which the tightness of the constipation is lost. 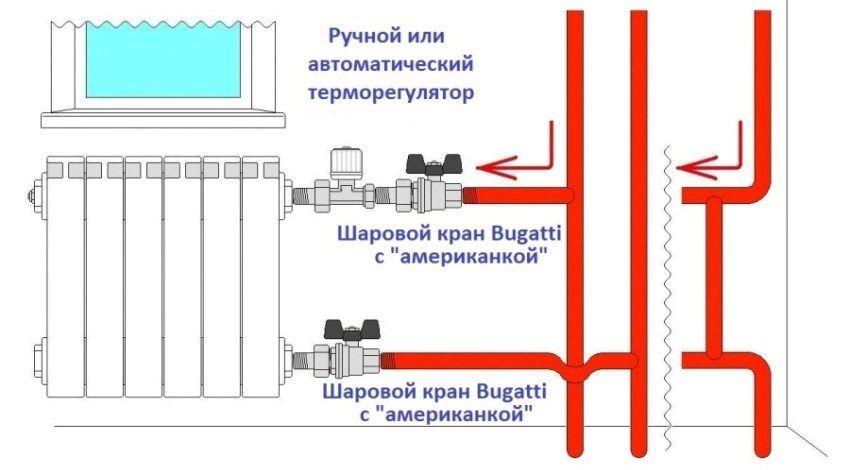 In general, quite functional and low-cost solution. You can regulate the flow of water, but all operations have to be done manually. There is no marking on the locking device. It is necessary empirically to select the position of the valve to reduce or increase the temperature of the radiator. Constant manipulation of the crane also does not pass for him without a trace – most often the protective cap of the device breaks. 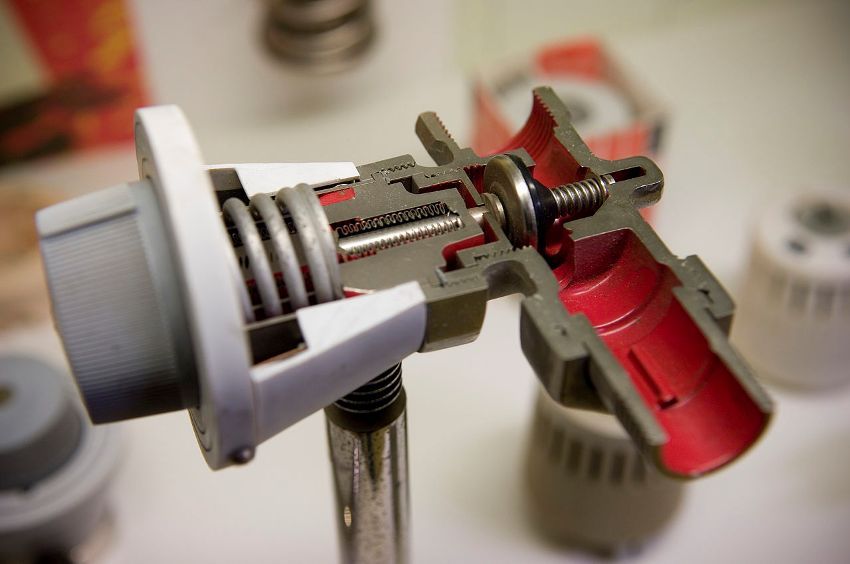 This is the best option for modern housing. The mechanism of the device consists of two parts – a sensitive thermal head and a valve. They interact with each other without the participation of any energy. Thermal head (bellows) is a hollow corrugated cylinder filled with gas or liquid.

If the room temperature rises, the liquid in the cylinder expands and the bellows increases. This actuates the stem, the closing valve. The flow of coolant into the battery partially overlaps, which allows you to adjust the air temperature downward. If it becomes cool, the volume of working medium in the head decreases. The stem snaps into place, the valve opens the passage to the coolant. The battery heats up. 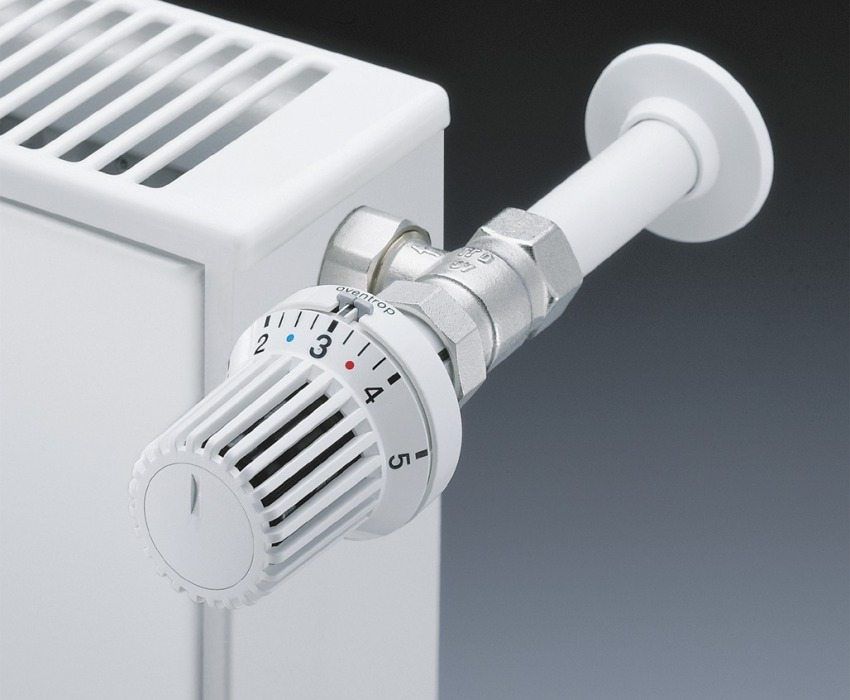 Thermal heads have a large margin of safety. They withstand about a million cycles of expansion and contraction. The device and for 100 years does not develop such a resource.

Helpful advice! First of all, thermostats are installed in rooms with an unstable temperature (in the kitchen or in rooms with windows on the sunny side). In private cottages, devices are mounted on the radiators of the upper floors, where the warm air rises. At the expense of it temperature condition in all house is leveled. 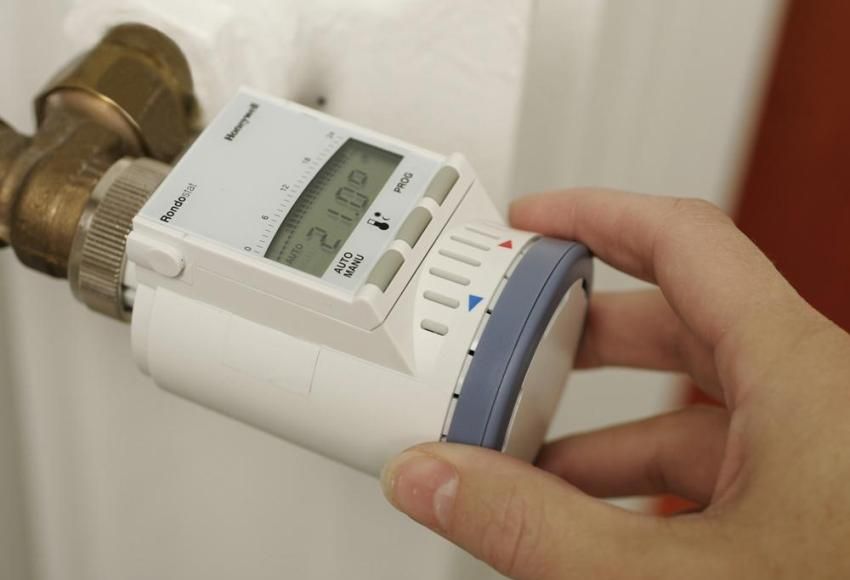 The principle of operation of thermostats for radiators is the same, but there are a number of design differences.

Thermostats with manual adjustment. Such devices have a valve head, on which divisions are applied from 0 to 5. Turning the valve’s flywheel, we increase or decrease the through-hole for the heat carrier. 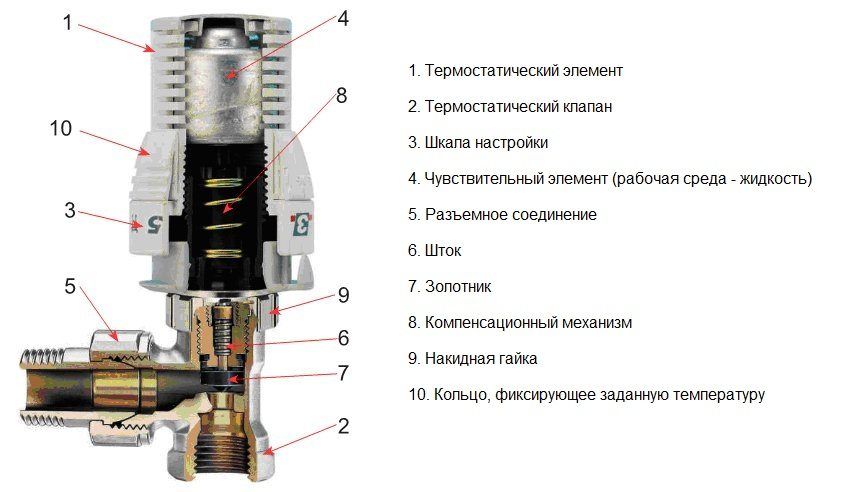 Electronic device. Powered by batteries or battery. This is the most massive and expensive device of all, but its capabilities are expanded. The thermostat is equipped with a temperature sensor, remote or built-in. When the external conditions change, the sensor sends a signal to the microprocessor, and the thermostat is triggered.

The cost of the device quickly pays off by saving heat. The device can be programmed to change the temperature during the day, as well as on days of the week. For example, from 9 to 17 o’clock set the temperature at 10-15 degrees, and later raise it to a comfortable 22 degrees. 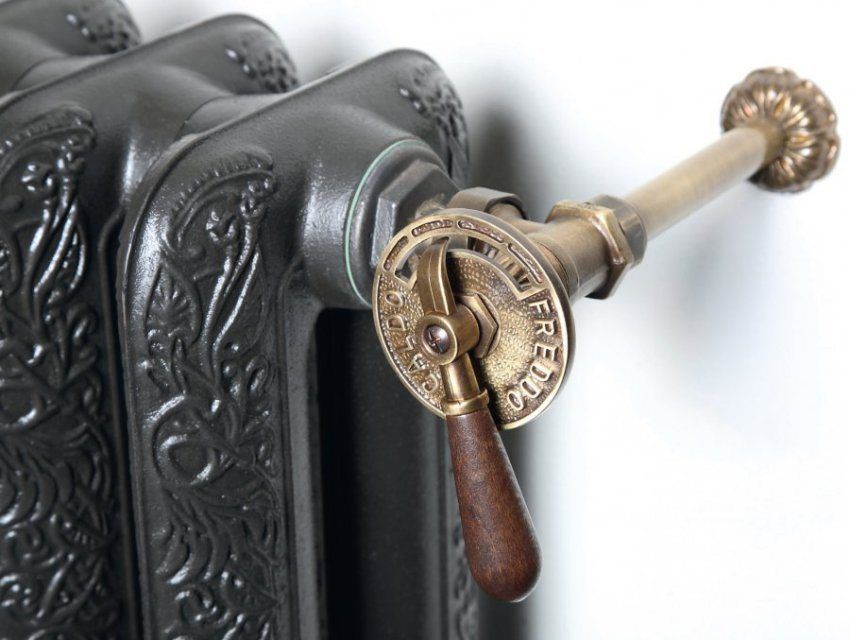 The bellows may contain liquid or gas. Gas thermostat for a heating radiator responds faster to rising temperatures. But fluid relays respond better to the pressure of the bellows. In addition, they are easier to manufacture, so they are available in an expanded range.

In homes with an old monotube battery system connected in series. This means that the thermostat, stopping the flow of coolant to one radiator, actually stops the circulation of hot water throughout the system. Replacing old batteries with modern convectors should be accompanied by the installation of a bypass – a pipe connecting the inlet and outlet ducts of the pipeline.

For such a system, select temperature controllers with a large internal diameter, with low resistance. If you do not take into account this moment, then the entire coolant will go through the bypass, and the batteries will remain cold. 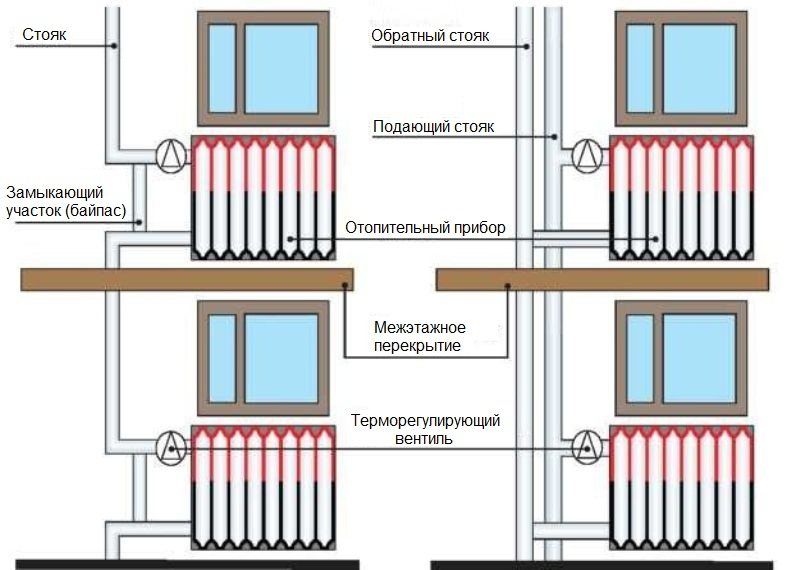 In a two-pipe system, radiators are connected in parallel. Disconnecting one battery will not affect the work of the others. A bypass is not needed here, and for effective temperature control, you can install a thermostat with high hydraulic resistance. 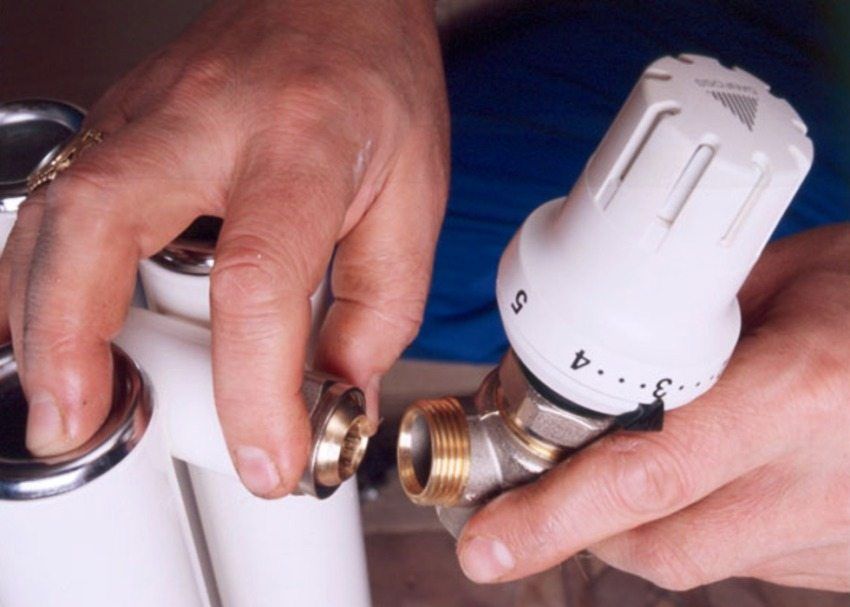 Any valves and fittings are mounted taking into account the direction of movement of the coolant. The device has an arrow, the course of which must coincide with the direction of flow of hot water. Mount the regulator only in this position.

The device should be horizontal, parallel to the floor. If the valve will stand vertically, the thermal head will be in the stream of warm air from the pipe. As a result, the device will not be able to accurately respond to changes in temperature. With a constantly half-open valve, the temperature in the room will be lower than the set one. 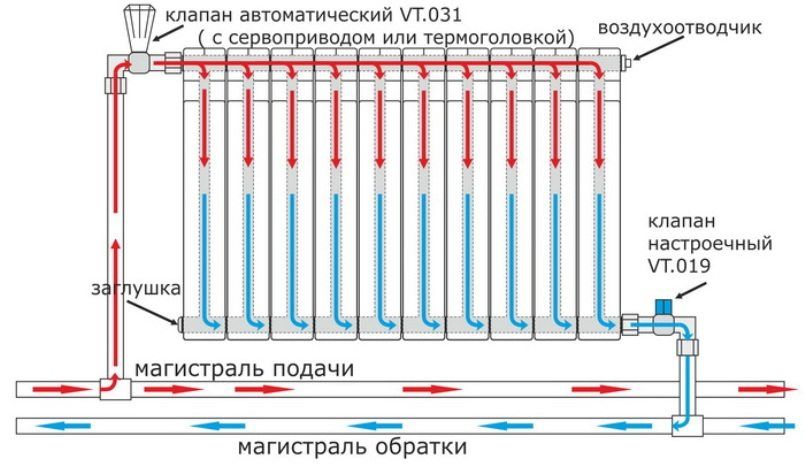 Do not close the thermostat with decorative panels and heavy curtains. If it is still necessary, then it is better to purchase a regulator with a remote sensor, which is installed at a distance from the valve.

Finally. The efficiency of heaters equipped with thermostat increases many times over. Installing thermostats saves on payment of bills, simplifies the repair of the system and creates a favorable microenvironment in the house.

Laminate – demanding material, which requires the preparation of a perfectly flat and smooth
A unique offer for you

Heated floor on the balcony and loggia: a review of optimal heating systems
Benefits of installing warm windows in a private house

Blinds to the kitchen: a stylish element of decor in a modern interior.

Built-in microwave oven: what you should pay attention to when choosing a device

Pavement tiles in the yard of a private house: photo compositions