As the cold weather approaches, many craftsmen come up with various designs for space heating and water heating. The first question is the type of fuel. In search of the most rational and cheap option, many opt for a test, the average consumption of which is about 2 liters per hour. Furnace waste oil has several advantages. Knowing all the details of its manufacture, you can create a budget and efficient source of heat in the house. 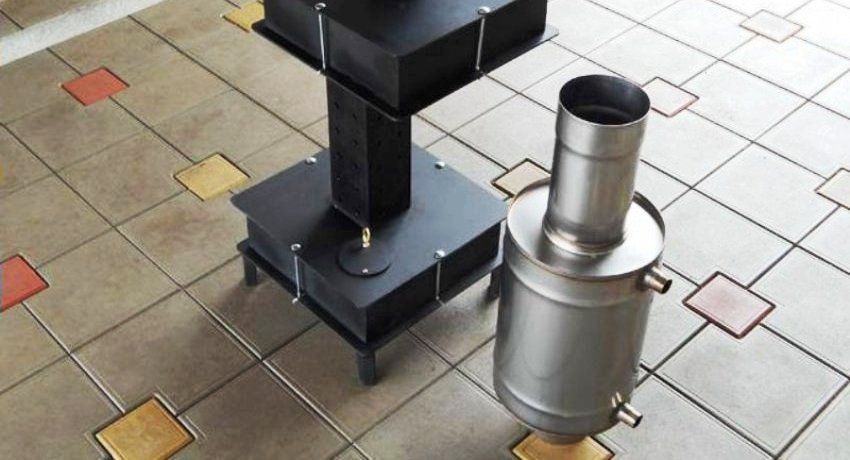 Advantages and disadvantages of a waste oil stove

A factory or homemade oven with used oil is characterized by several advantages: 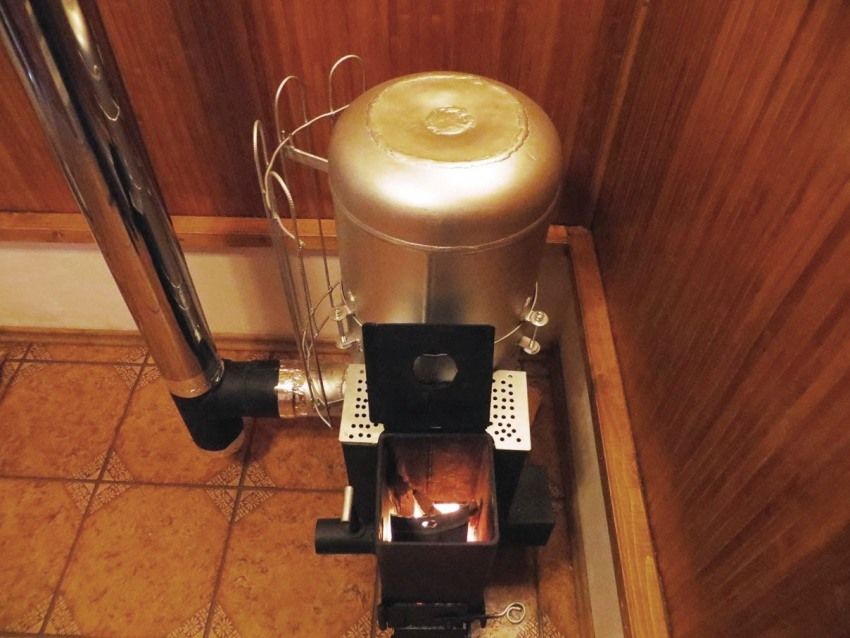 The furnace for working off the closed type is not without flaws, among which are the following: 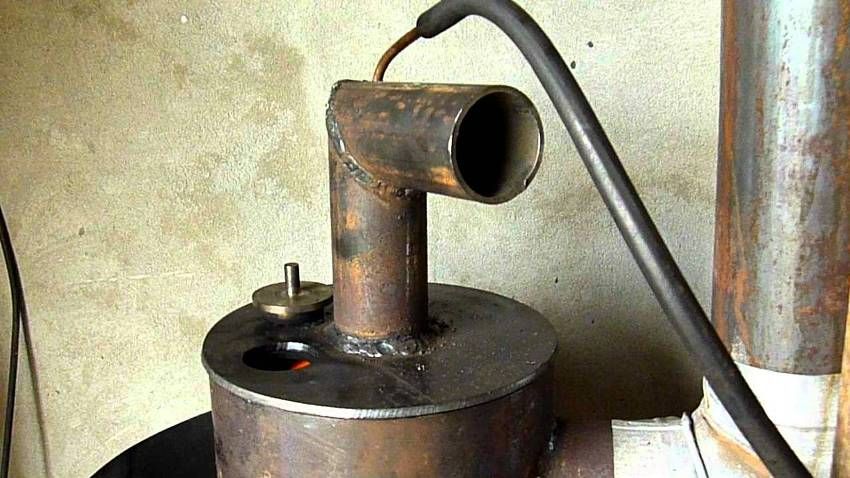 Important! Before pouring oil into the system, it should be filtered.

The prototype for oil furnaces, working on waste oil, is kerosene, which was used previously in the villages and cottages. It used kerosene as fuel, the fumes of which were burned in a separate chamber. To save on fuel, a variant was developed for burning waste oil. It can be purchased free of charge or at a reasonable price at any service station. 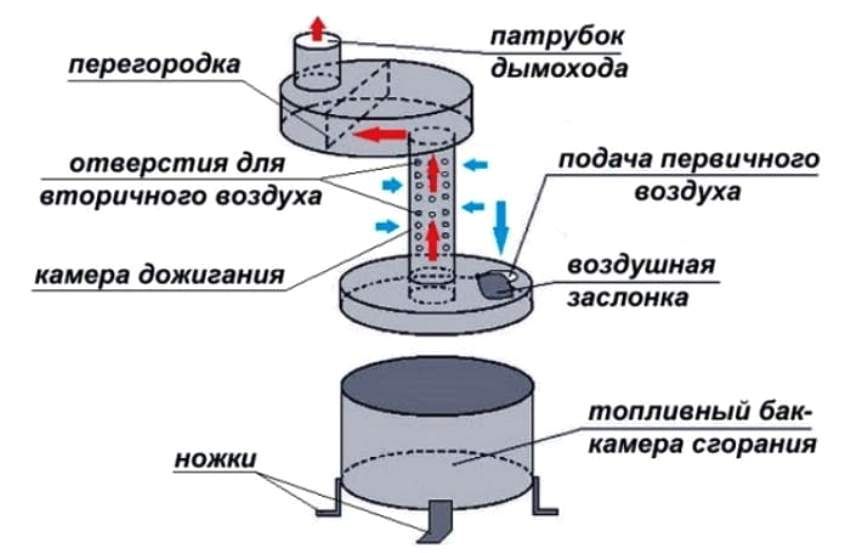 Creating a homemade stove to work out is not a difficult process. The main task is to properly organize the system for a productive oil combustion process. To ensure complete combustion of vapors, heavy components must first be split into light ones, which is carried out as a result of pyrolysis. For efficient evaporation, proper oil heating is performed.

The principle of operation of the oil furnace during the working out is as follows. First of all, in the lower chamber of the apparatus, ignition of the mining is carried out. The intensity of combustion is regulated by the use of a throttle valve in the body of the device, through which air enters the chamber. The vapors of the oil mixed with oxygen rise in a vertical pipe. The pipe is connected to the upper tank, which is an afterburner chamber.

The mixture is mixed under the influence of Coriolis force (inertial force). The intensity of the process is achieved by the correct choice of the diameter and length of the combustion chamber. To ensure complete combustion, the air through the flap must be supplied in sufficient quantity. To do this, it is sucked additionally through the holes made in the vertical perforated pipe connecting the tanks. 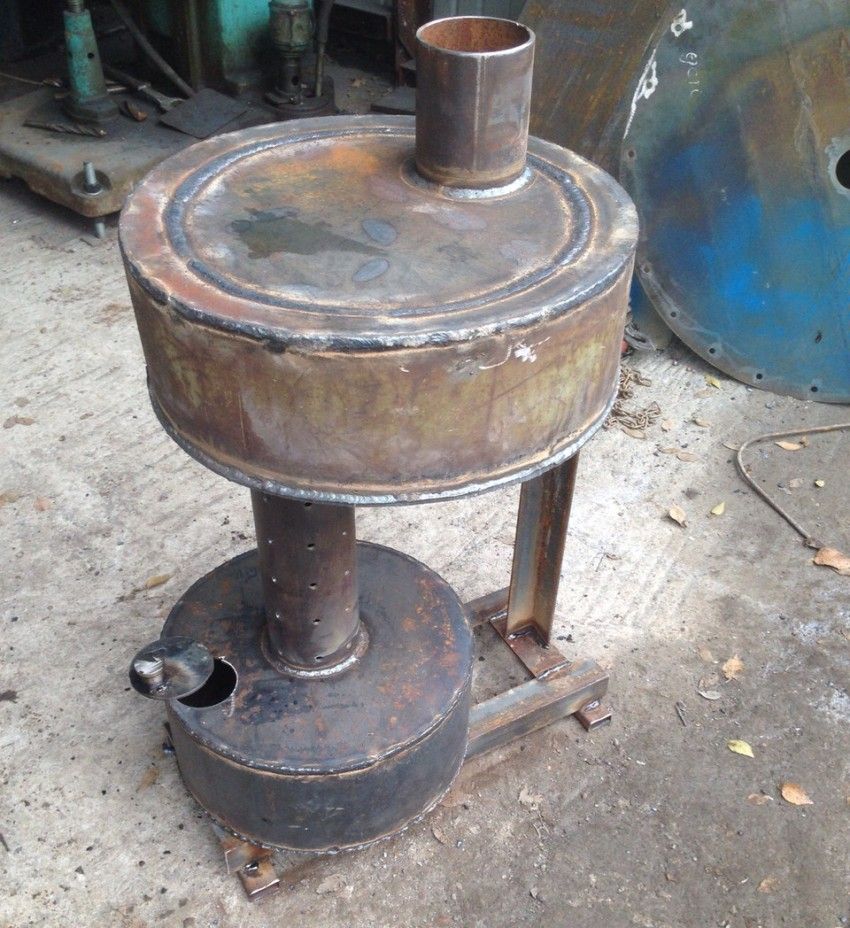 The gas flow is directed to the final post-combustion chamber, in which the upper part is expanded. In its manufacture, horizontal spacing is performed between the entrance of the chimney and the exit of the combustion chamber, which is necessary to ensure a temperature jump between the zones of oxide-nitrogen and oxygen afterburning. At temperatures below 600 ° C, nitrogen oxides are more active than oxygen. Decomposing, they oxidize particles of fuel. With increasing temperature, oxygen acts as the main oxidizing agent. Harmful substances through the chimney are discharged into the atmosphere.

Important! To ensure an effective oil combustion process in the upper tank, the temperature should be low.

There are several types of oil furnaces that operate on waste oil. The classic model is the pyrolysis apparatus. It is made from ready-made containers in the form of barrels, pipes, cylinders, or from alloy sheets. Oil is poured into the bottom of the vessel, which splits with an insufficient amount of air. In the upper tank there is an intensive combustion of its vapors, due to which a lot of heat is emitted.

Temperature adjustment is carried out by air supply. Such a furnace needs constant cleaning of the chambers from the accumulated fractions. It lacks mechanical temperature control. 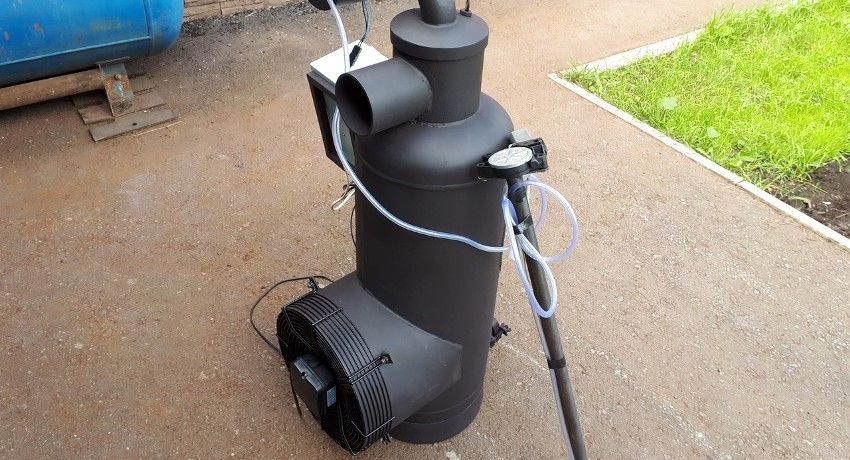 At the stove for oil refining with the help of a fan, guaranteed air supply to the second chamber is realized. The combustion process is more efficient, so that warm air flows evenly into the room.

The principle of operation of the stove with a droplet fuel supply is similar to the mechanism of operation of diesel engines. It is economical. However, the independent process of manufacturing the device is very time consuming, so it is better to purchase a factory device of this type. In addition, it should be noted that home-made drip stoves are picky about the quality of the oil, which must be preheated before being fed into the oven.

The most efficient model is a supercharged waste oil furnace. It, in comparison with the stove, has a higher cost. Additional heat comes from the blower fans. Charging can be performed using a motor cooler motor, and blowing a heater will provide a 220V home propeller.

It is required that the furnace be in an empty room, near which there should not be flammable surfaces. Special attention is paid to self-made devices. They can not be put on a shelf or other support that can catch fire.

A homemade kiln for working out should be located on a flat base, which may be concrete or brick. It is necessary that the distance between the apparatus and the wall be at least 1 m. To form a good draft, the chimney must be longer than 4 m. On its outer side, insulation must be provided to prevent the formation of acid condensate.

The composition of the used oil should not contain a solvent or other flammable element, so these components should be located away from the furnace. It is also unacceptable to get moisture into the container with oil. This will cause ignition in the furnace. In the event of an emergency, a fire extinguisher should be used to eliminate the fire.

Important! In the room where the stove is located, a good system of natural forced-air ventilation should be organized. 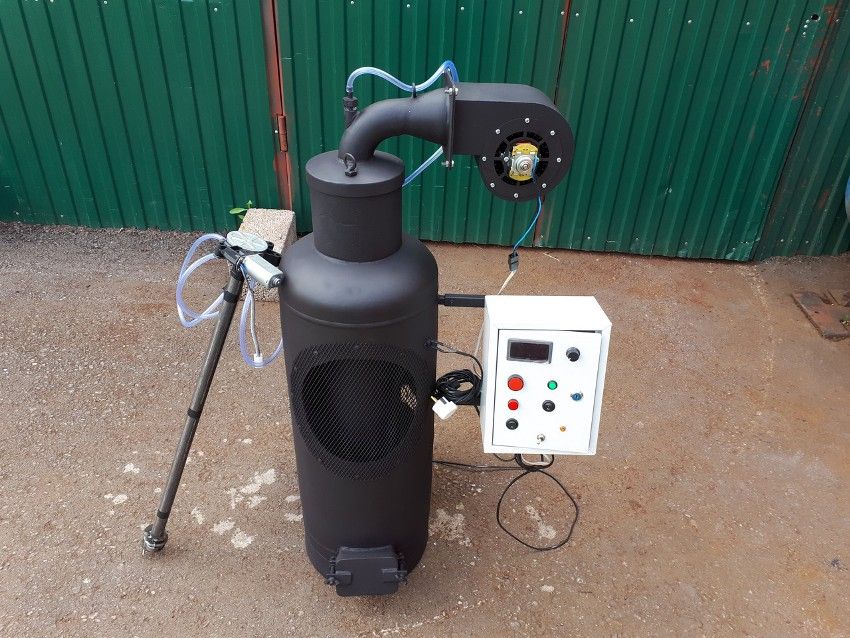 Before starting work, the oil is poured into the container in an amount equal to half the volume of the tank, which will provide the necessary space for the formation of vapors. To get oxygen enriched in vapors, you must wait a while. Then the fuel is ignited with long matches. As soon as the vapor ignition process begins, the damper is half covered.

To improve the efficiency of the mini-furnace, it is possible to install a sealed liquid tank above its upper chamber. For the supply and removal of water to it are attached fittings, which are placed at different levels. Another option for increasing productivity is the necessary convection of air, which is done with the help of a fan located near the upper chamber. Taking warm air from the stove, it contributes to its cooling, which has a positive effect on the life of the device.

Waste oil kilns are often used to heat a garage or a small workshop. In a building where people are constantly present, it is not recommended to use such a device. This is due to the fact that the stove absorbs oxygen, which has a negative effect on the human respiratory organs. If the device is intended for heating a dwelling, it should be located in a separate room. 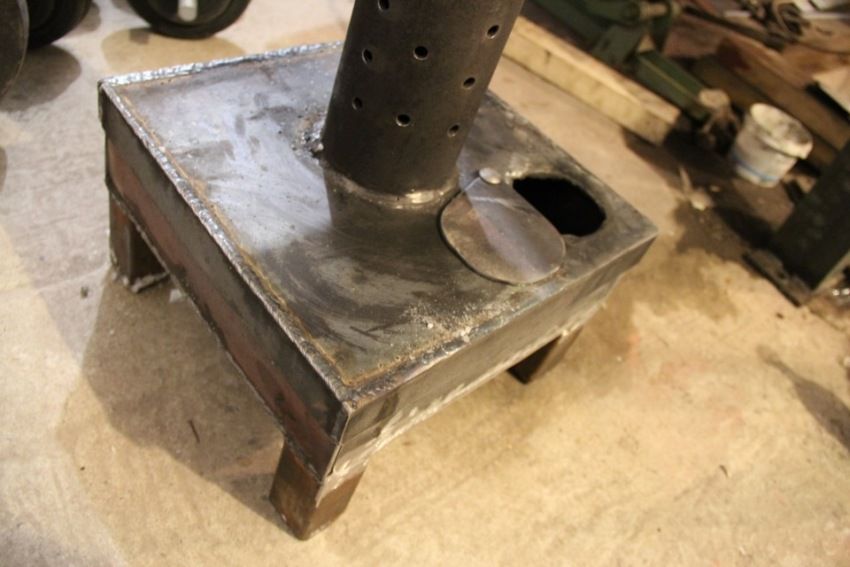 To improve the efficiency of the device, additional devices can be used. A waste oil furnace with a water circuit is organized by tying the coil body or installing a water jacket on the chimney. In the first case, the coil is made of copper pipe. It is built into the heating system of the house.

The water jacket is made of sheet metal in the form of a container, which is located in the upper part of the body. It carries out the circulation of the liquid coolant. For efficient operation of the furnace in the tank should be up to 30 liters of water. Such a device will allow to heat a large area.

The furnace for working off with a water circuit must be equipped with an expansion tank with an emergency drain, necessary in case of boiling liquid. It is not recommended to install a membrane tank.

Another option to improve the efficient operation of the furnace is to use an air heat exchanger, which is represented by a fan. No structural changes are made to the device, and the heating of the room is improved. The fan is located near the upper chamber. When it is cooled, heated air spreads over the area of ​​the room. You can also drive air through the duct, located on top of the stove, or through a pipe that is mounted into the afterburning chamber. 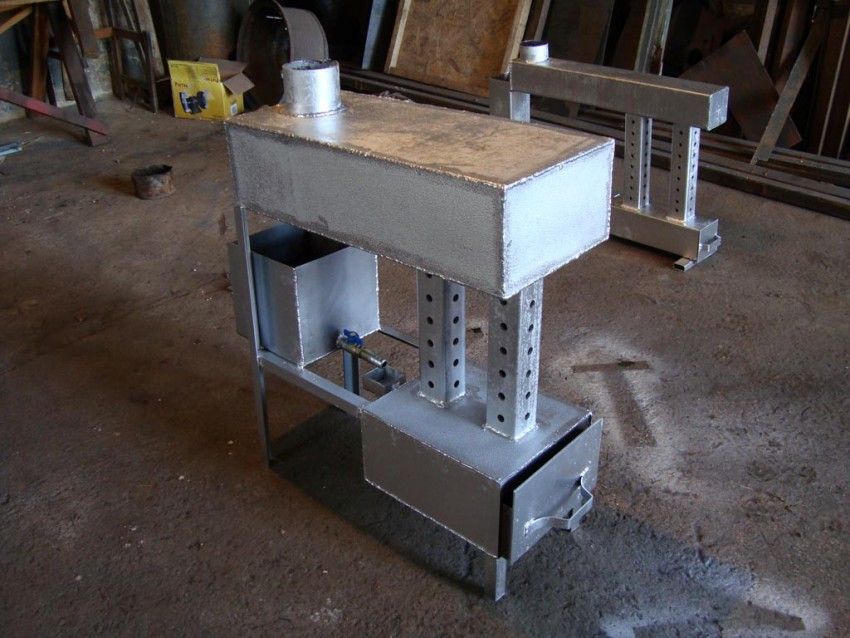 The stove Teplamos NT-612 is often chosen as an apparatus used for heating the garage. The power of such a drip fanless heater can vary in the range of 5-15 kW. Fuel consumption is 0.5-1.5 l / h.

In the tube of the combustion chamber with a drill, holes are made along its entire height, leaving the lower zone with a height of 20 mm and the top (50 mm) untapped. After completion of all welding work, the tightness and reliability of the seams should be checked. Next, organize the test furnace. In the tank for oil refills. Top kerosene is added. A neat ignition is performed with an open fan, with which, after heating the furnace, the intensity of heat is adjusted.

Important! To carry out a test furnace for working out should be on the street, which will avoid a fire in the room or other accident.

To heat a garage, a small workshop or a dwelling, you can use a stove for working out, which has a number of advantages. The device can be purchased as a finished product or you can make it yourself using drawings from the Internet. Before you make the oven, you should study the sequence of actions in order to subsequently get a practical and effective device.

Accommodation in country houses and cottages is accompanied by some difficulties with electrification, heating

Mansard bath: delightful projects with comfortable space under the roof

Waterproofing the basement from the inside from groundwater: methods to protect the building from moisture

Warming the floor in a wooden house below: materials and installation technology

How to choose the entrance metal door to the apartment

Children’s pools for giving: the sea of ​​pleasure for kids

Heating options for a private house

Wardrobe: photo of the design of the facade and types of design

Drainage system around the house: a drainage device for the foundation of a residential building

What is a pile – grillage foundation for a house