Often you have to see beautiful and unusual caps that house owners place over the chimneys. At first glance, it seems that they perform only a decorative role, but they have functions that are very important when it comes to the safety of the chimney system. Consider what the cap on the chimney pipe is for, what principle it is chosen for, what types of structures exist and how to make it with your own hands. 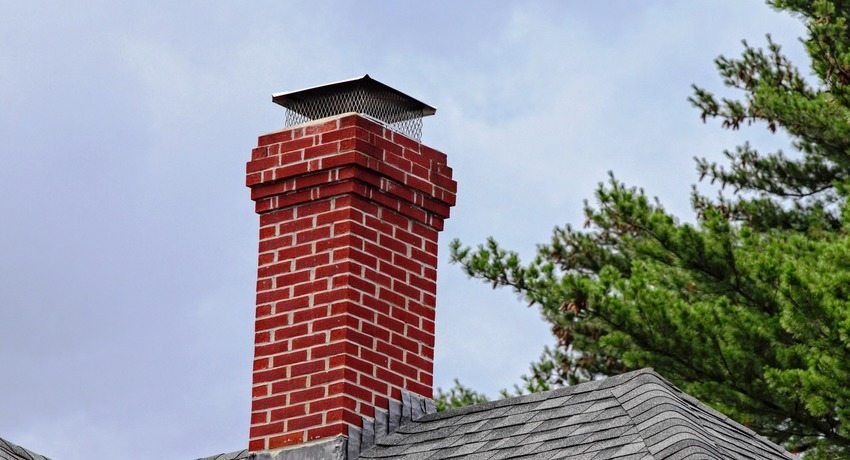 What is needed cap on the chimney pipe

Caps on the chimney pipe – a fairly common phenomenon. However, many people are mistaken about what they are for. Argued that they protect the pipe from condensation. However, this is not quite true. Evaporation and collection of moisture occurs in the inner part of the pipe and the cap on the chimney pipe (the photo on the Internet well demonstrates the principle of its operation) here can do little to help.

Why do we really need a cap on the chimney? Consider some of its main functions: 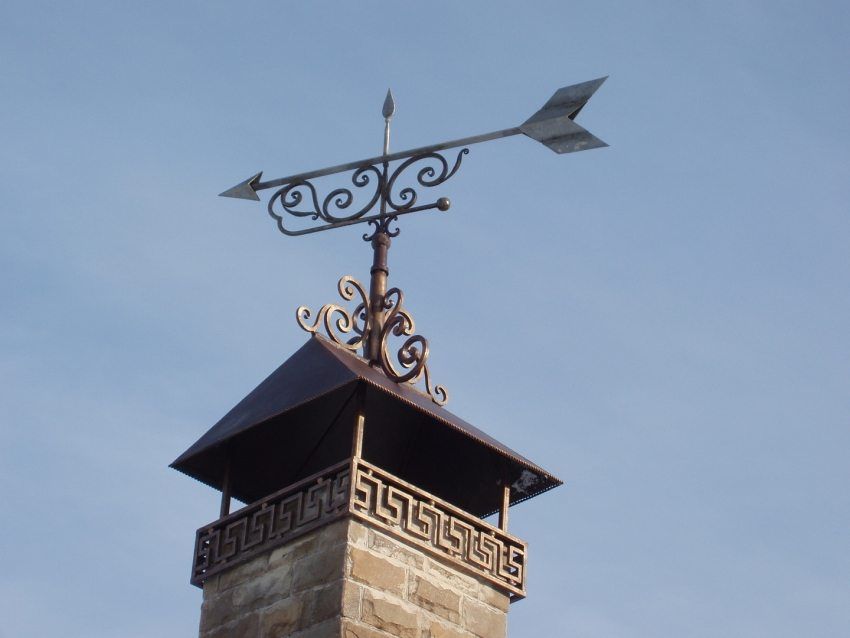 It is necessary to recognize that most of the decorative flyuGars on the chimney pipe do not at all improve the functional characteristics of the pipe, but, on the contrary, reduce these indicators. The exception to this rule can be considered only nozzles that have the following types of design:

The first option is much more efficient than the second. The semi-cylindrical housing remains mobile due to the bearing. It can rotate depending on weather conditions, and as a petal of a weather vane fixes it so that it is constantly turned to the wind by the rear. As a result, smoke traction increases due to the formed vacuum inside.

The principle of operation of the second mechanism is as follows: inside the deflector itself some vacuum appears, due to the fact that the air flow generated by the wind load bends around the tip on the brick chimney pipe. As a result, such an “umbrella” functions differently, depending on weather conditions: in windy weather, it increases cravings, and, on the contrary, decreases in calmness. 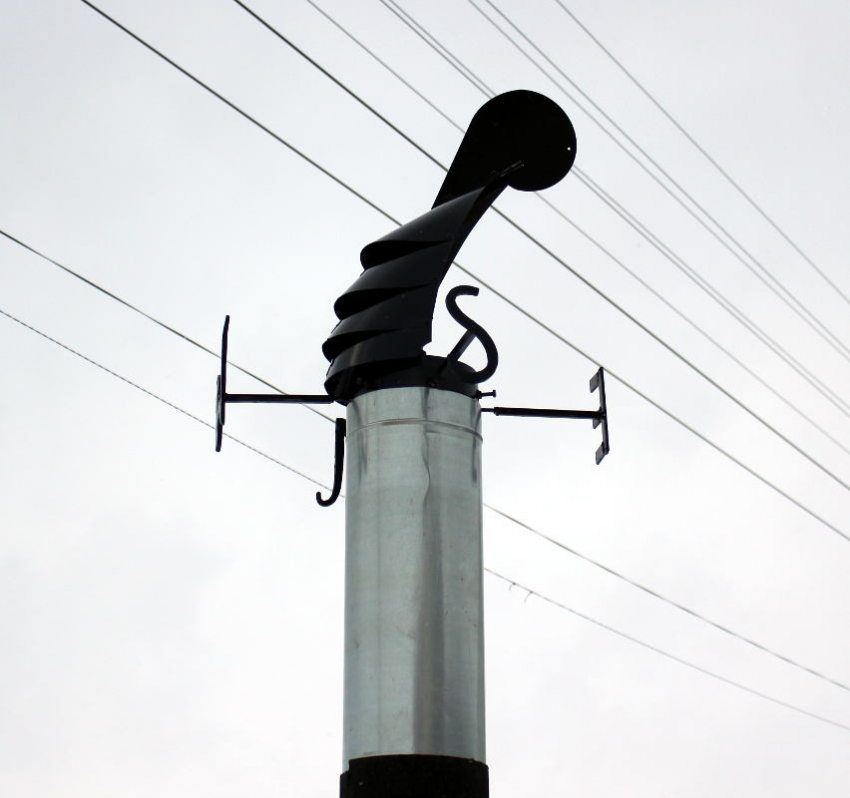 Note! A weighty argument in favor of the first option is that the design chimney on chimney pipe completely eliminates the danger of the wind blowing out, which still sometimes happens when using the second type of system.

In addition to the already considered structures, there are many others that are also widely distributed. All of them are united by a common principle of operation and device – these are devices that serve to cover the cut of the pipe, while leaving a small gap so that the products of combustion can leave the pipe outside. The shape of the deflector on the chimney pipe can be almost anything, but according to the material of manufacture they can be divided into several groups: 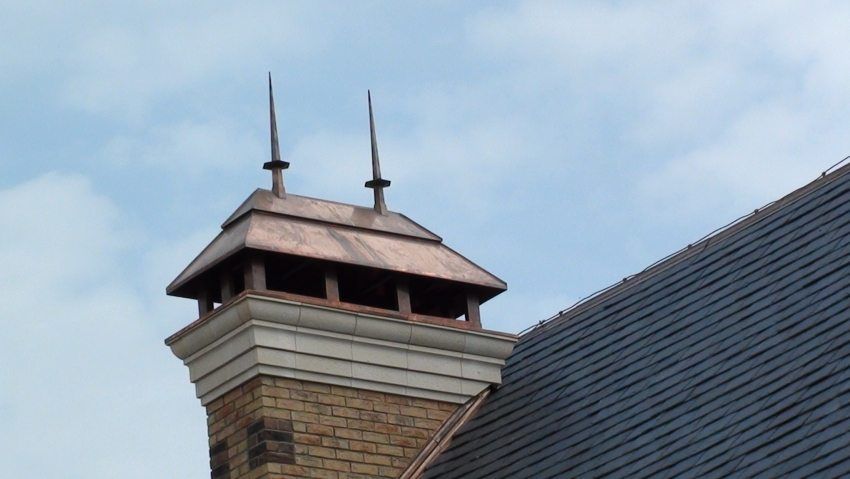 If we talk about the manufacture of the cap with your own hands, then for this purpose galvanized steel with a thickness of about 0.8 mm is most often used. This option is most preferred because of its availability, as well as a sufficiently long service life (about 20 years). To better understand the design of such a hood on the chimney, photos and diagrams will serve as an excellent guide.

Galvanized steel has only one serious drawback – it quickly loses its original appearance, tarnishes. She is exposed to various external factors that have a negative impact on her. Much better such an impact can withstand metal, which additionally has a powder coating, but this material is much more expensive.

All other metals retain their appearance long enough, but their cost is several times higher. However, the price is reflected not only in their appearance, but also on the service life. And although copper also tends to fade over time, here we are talking more about decades than years. 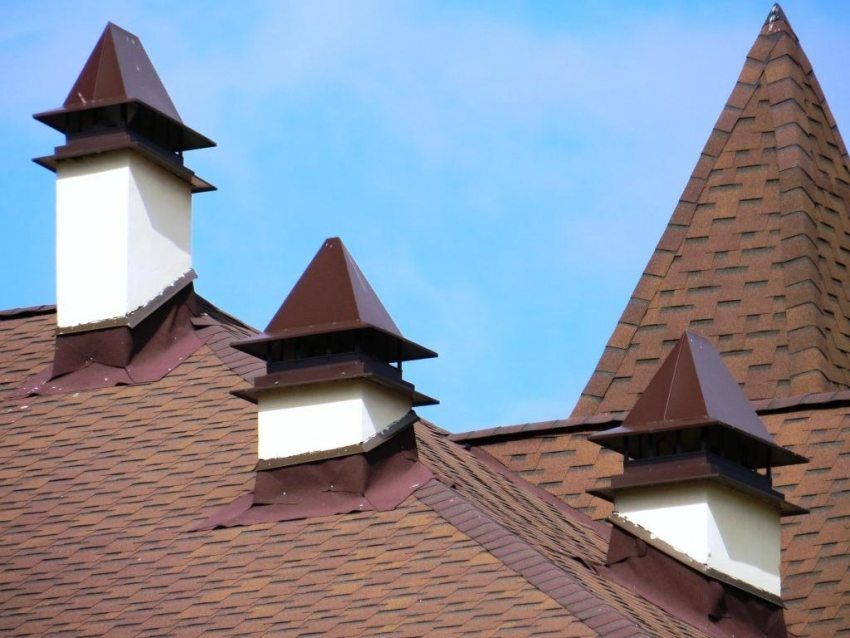 To pick up the cap of the correct design is not an easy task. And first of all, it is necessary to take into account the type of boiler house used and the type of fuel used. As an example, consider the fact that only gas nozzles are suitable for chimneys of gas boilers. They have an open top and are the only ones suitable for use in this case.

Note! Installation of nozzles on pipes that provide a chimney from gas boilers is regulated by regulatory documents that prohibit the use of hood-umbrellas for this type of chimney.

There is a logical justification for such a ban: in winter, when the temperature drops below zero, the chimney cap is subject to freezing and can be covered with ice. Over time, ice can close most of the opening provided for smoke, which will lead to its accumulation inside the structure. In this case, there is a serious danger to the health of the inhabitants of the house, as accumulating inside, smoke can cause serious poisoning. 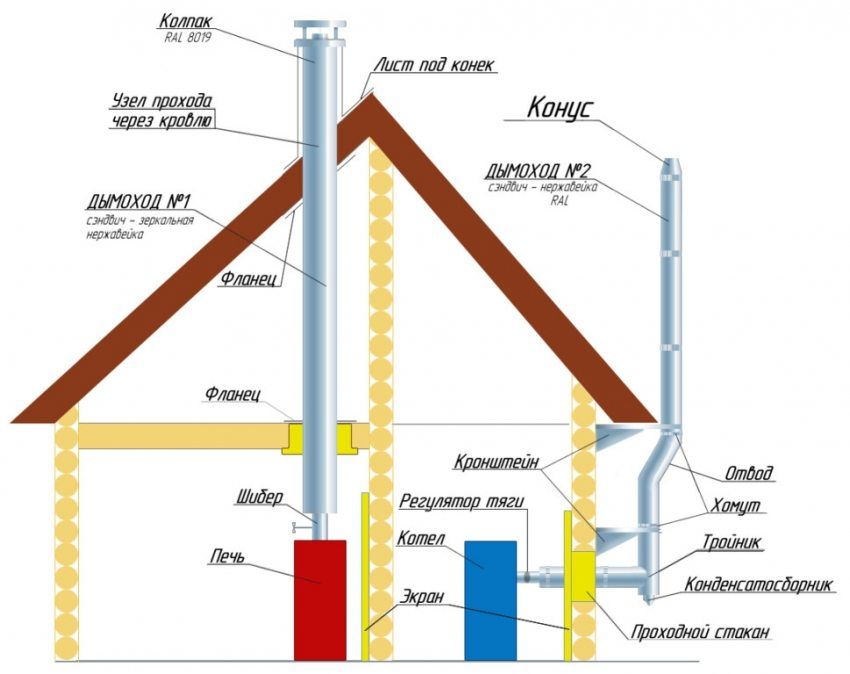 Freezing occurs as a result of the formation of condensate, which appears on the surface of a cold metal upon contact with sufficiently warm combustion products. The situation is different only with solid fuel boilers. Due to the fact that its efficiency almost never exceeds 70-80%, the gas temperature, respectively, remains in the range of 150-250 ° C. It is safe and the use of the nozzle is quite acceptable.

Helpful advice! Do not forget that in the case of the use of solid fuel, the cap is very quickly covered with black soot. So you should not choose too complex relief models that are not amenable to cleaning.

The variety of forms of modern chimneys is very large. Here you can find almost any options. Consider the most popular of them, which have an unusual geometric shape and are able to decorate any pipe: 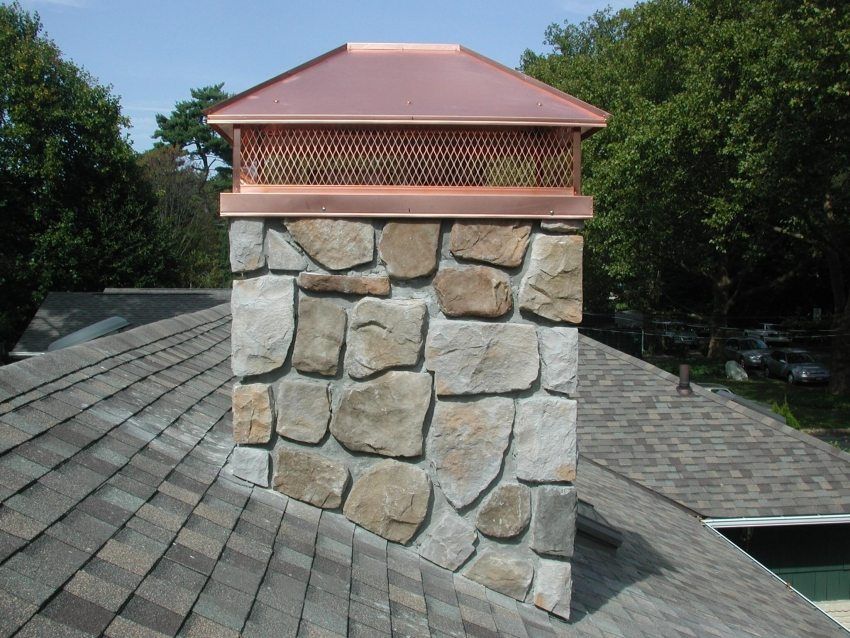 Fly-flakes with a wind vane are distinguished by the fact that a special damper is located inside the structure, which allows the combustion products to quietly exit the pipe even in the most windy weather. And the additional opening cover provides easy access to chimney channels to make their cleaning.

Depending on the shape, roofs of chimneys are divided into the following categories:

However, in most cases, this parameter does not affect the functionality of the device and serves solely for aesthetic purposes, providing the chimney with a unique appearance. 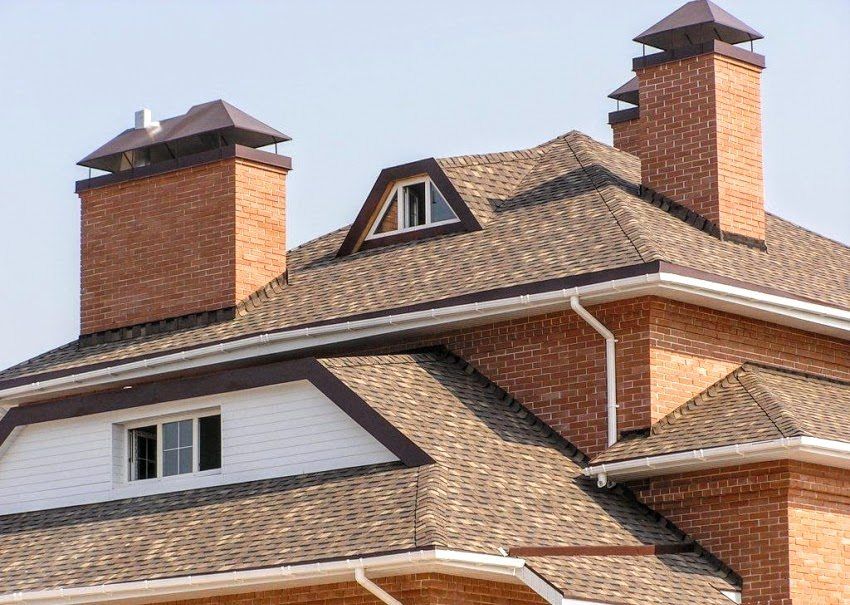 Another parameter that should be guided when choosing a cap – the structure of the chimney. The ideal option is considered to be a three-layer structure of modular sandwich panels. In this case, the protection of the chimney from precipitation is simply not necessary. All the moisture that gets inside does not have a negative effect on the pipe, but on the contrary, is beneficial to cleaning the pipe and collecting in the condensate trap.

If we are talking about a gas boiler, then there are no options other than a nozzle. But if you are dealing with a solid fuel system, then there are many options, although the deflector-weathervane is considered to be the most popular and functionally justified. Demonstrate the beauty of such chimneys on the pipe photo, in large quantities offered on the Internet.

Many questions arise when it comes to arranging a brick pipe. There are no contraindications here if you are dealing with a solid fuel system. In this case, you can choose any cap you like. But if a gas system is used, then the installation of an umbrella on the chimney pipe in this case is prohibited.

But here a completely natural question arises: what to do with the destructive power of moisture, which eventually gets inside? For this case, special designs are provided that can completely block the brick base of the pipe. 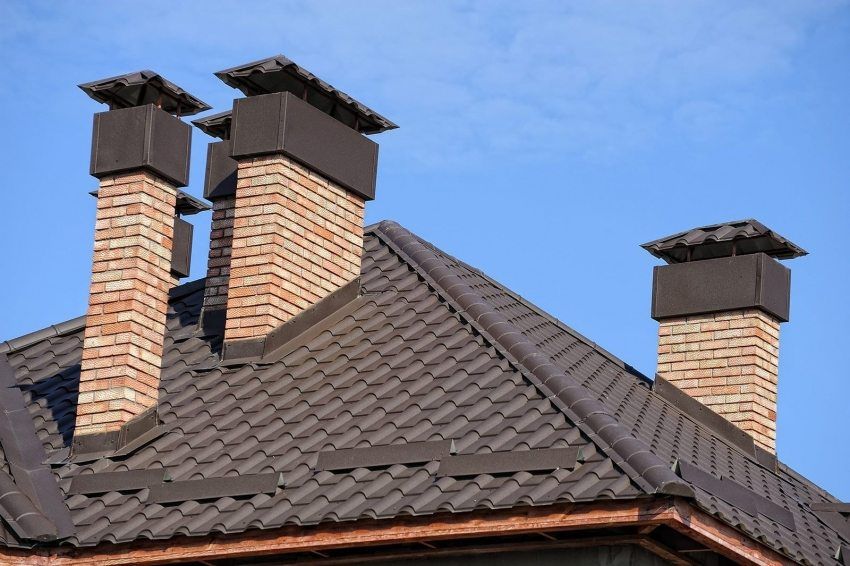 A visor on the chimney pipe with their own hands is not uncommon and many are trying to make it. If you have a galvanized sheet and tools at hand, you can save a lot of money on the purchase and installation of a baffle plate. To do this, you need the following:

In order to make a chimney with a chimney with your own hands, you need to make the appropriate measurements, and then, using the drawing, you can get to work.

Using scissors for metal, you can make a smoke vane with your own hands. To do this, you need to cut parts of the required size. Then roll up the diffuser body and drill holes in the upper and lower parts, so that after the riveting will be fixed, you get a solid construction. Drawings of the chimney cap do-it-yourself help to assemble correctly. 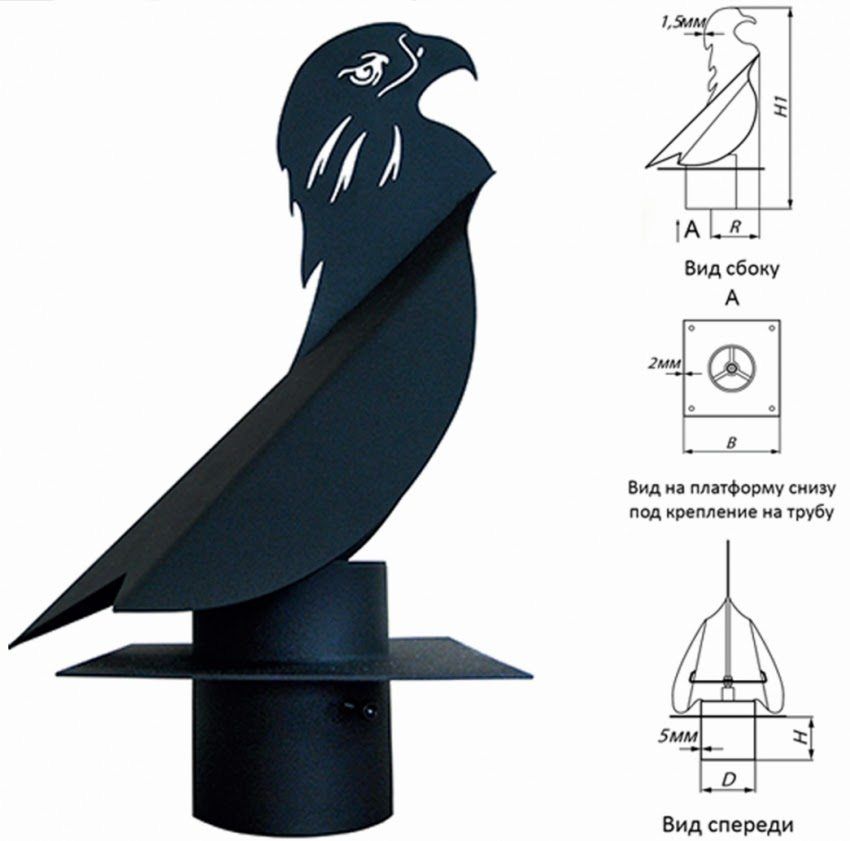 After that, you can begin to manufacture the upper cone. You can attach the legs directly to it (usually they need about 6 pieces).

Before you fully assemble the wind vane on the pipe with your own hands, do not forget to fix the fasteners with which the diffuser will be connected to the lower cone of the structure. The same rivets can be used as an attachment. In order to mount the cap on the pipe, it is best to remove its upper part, to fit the cap on the studs or legs, and then reinstall the entire structure.

Helpful advice! Do not neglect the quality of the deflector installation on the pipe. Being under constant wind load, poor-quality fasteners very soon lose their characteristics and the structure will disintegrate.

Of course, there is no decorative value made with your own hands by the fungus on the chimney pipe. Its design is primitive, but it can increase cravings by 20-25%, as well as protect the roof from accidental sparks. Using the drawings, do it yourself hands on the chimney pipe can be done quite simply and at the same time spending a minimum of resources. 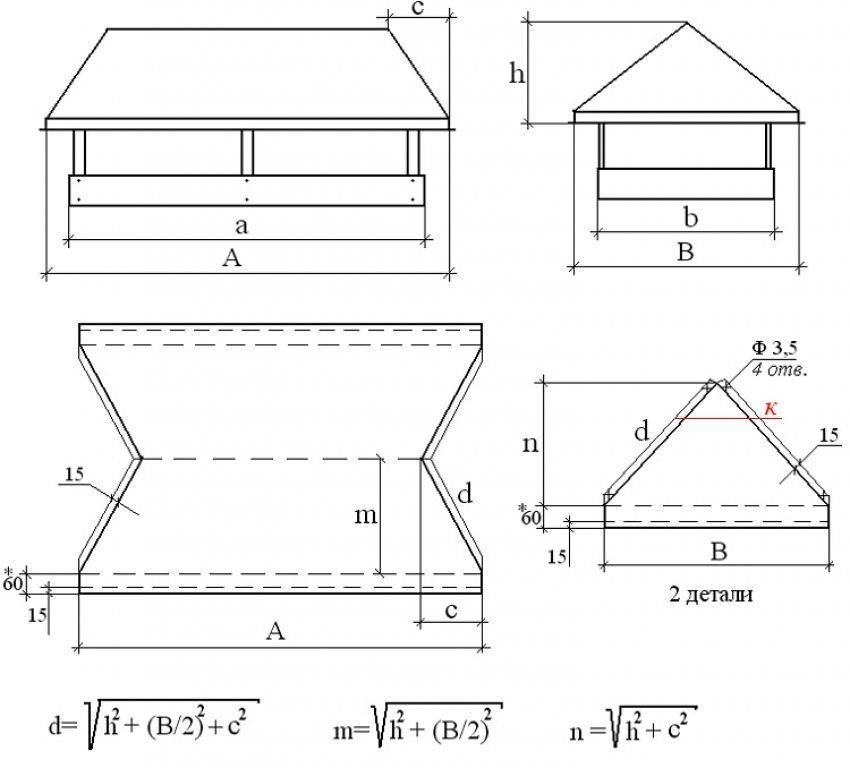 On the Internet you can find a lot of tips on how to make a chimney hood with your own hands. However, not everyone wants to bother about it, and many prefer the opportunity to purchase a finished product.

Prices for chimney caps are very diverse, and you can buy a chimney flue from 700 rubles. In this case, the easiest umbrella to buy a chimney pipe will cost 300-400 rubles.

If you want to buy a deflector on the chimney pipe, which can truly become a decoration of the roof, then you have to spend a lot of money. Forged smoke costs from 7000 rubles and above. The price of a chimney for brick pipes largely depends on its size, material of manufacture, as well as the complexity of the forged elements, which are the most diverse. Photos of forged chimneys you can look at specialized sites. 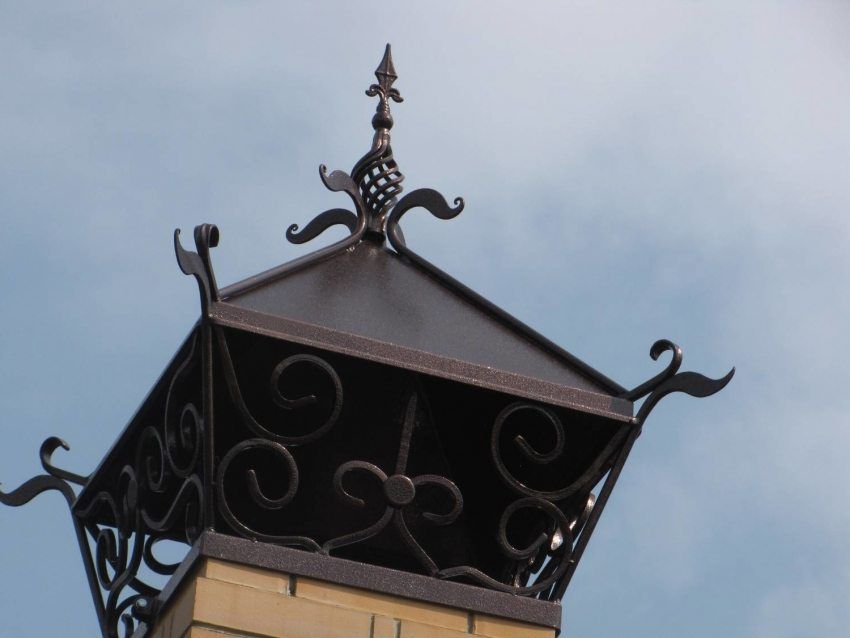 Another fairly expensive, but very beautiful option – a smoke vane. It comes in a wide variety of shapes and sizes, and it perfectly replaces a simple umbrella with a chimney pipe. Many craftsmen believe that using drawings, a vane on the chimney with their own hands is quite possible. However, this requires considerable skill. The cost of the finished version will cost from 5000 rubles.

Depending on your preferences, you can buy a ready-made visor for the chimney pipe or you can make an independent cap on the chimney. In any case, it is useful to see photos of the chimneys that are on sale in order to get a general idea of ​​their diversity and purpose.

In this review, we will consider what documents are needed when selling a land

Water can have a devastating effect on almost all types of building materials, damaging
A unique offer for you

Calculation of the area of ​​air ducts and fittings: effective methods

Sewerage in a private house: the scheme, the depth of installation

Rust paint for exterior metal work and its use

Aprons for the kitchen, skinali: photos of the best design ideas

Drainage at their summer cottage: the easiest way to protect against storm and melt water

Photos of the types of soft roof and prices: a review of materials

Gypsum tile for brick: the specifics of laying and operation