Effective illumination of roads and sidewalks is one of the prerequisites for safety at night on the streets of cities, in the courtyards of high-rise buildings and private houses. In addition, the lights also perform an aesthetic function. With all the assigned tasks, street LED lamps on poles are doing excellently lately, while providing cost savings and a quick payback. On the features of the new generation of lamps, this article will tell. 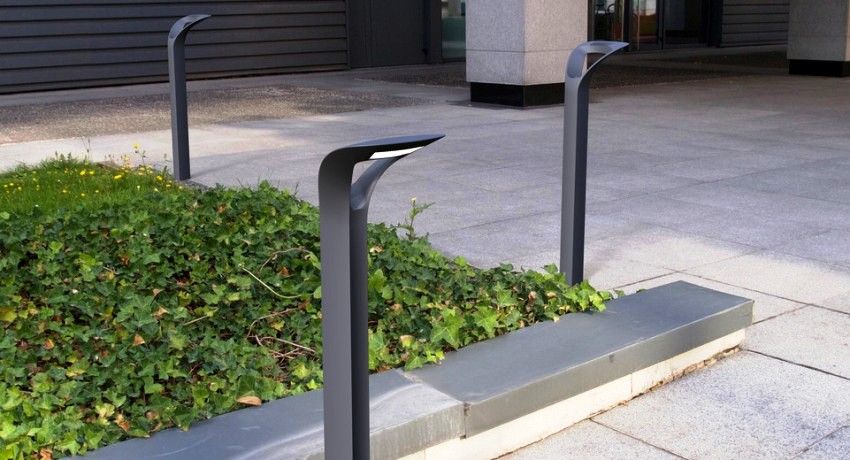 LED lamps on poles: the advantages of LED-lamps

The main function of street lamps is to provide high-quality bright lighting with the greatest radius of the rays. It is LED lamps as streetlights on poles that are now rapidly gaining primacy in the rating, thanks to a list of advantages, among which are the following: 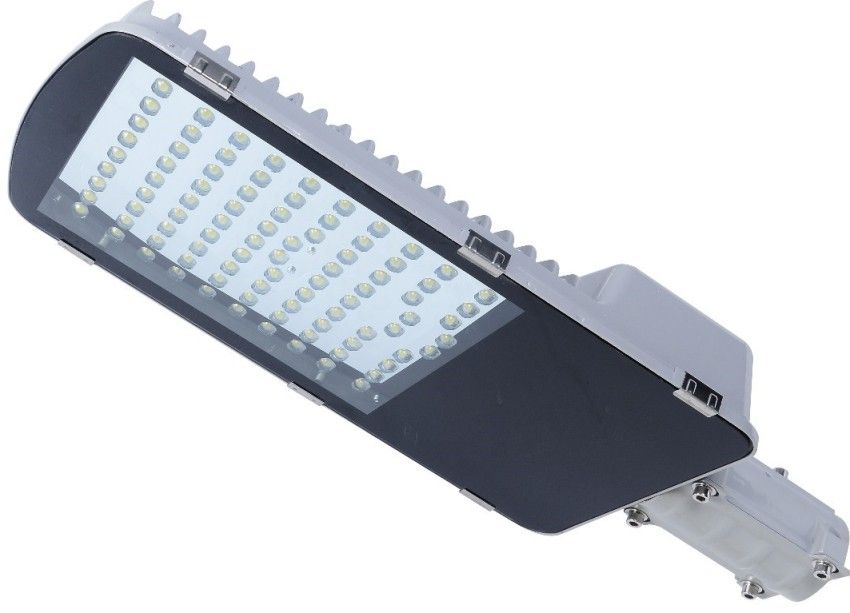 The main disadvantages of street lamps on poles

The main disadvantage of LED products designed for street lighting is its high cost in comparison with other products belonging to this functional group. It should be noted that the model range includes copies of street LED lamps on poles, the price of which is low, but at the same time they are of lower quality, besides, their service life is short. 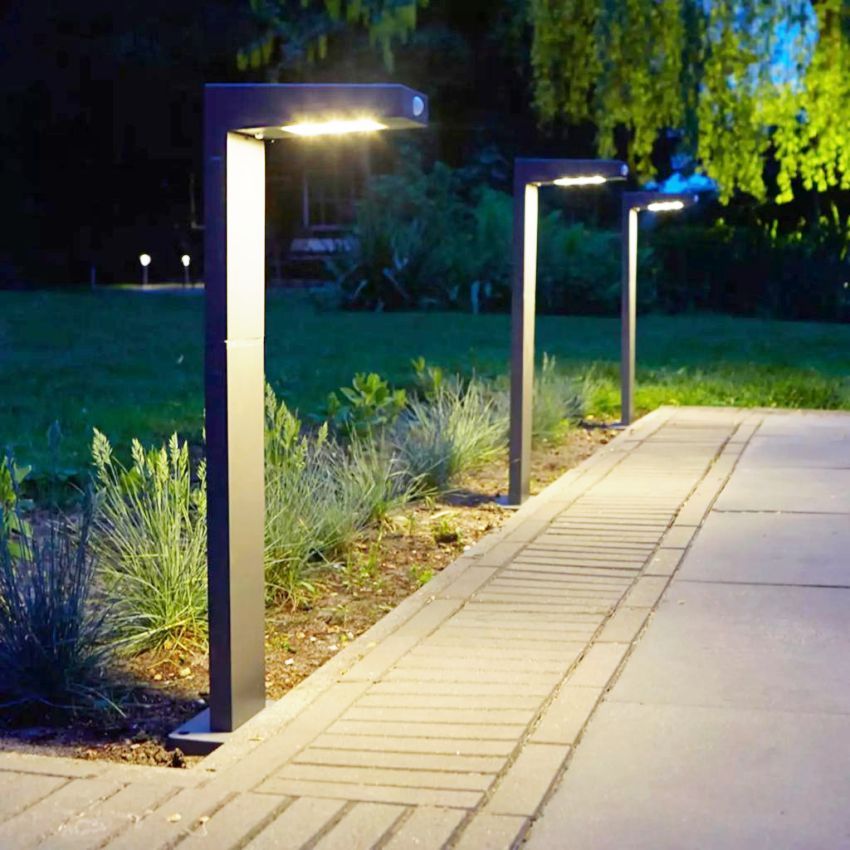 A negative feature of these devices is also the fact that the lamps on the diodes are prohibited for installation in closed capsules or lanterns due to the lack of ventilation in them. If the diode will be heated to 60 ° C, then it will soon fail. In this case, the LED becomes cloudy, that is, it degrades. The emitted light loses its brightness, which no longer corresponds to the original specifications.

Helpful advice! When buying LED lamps for street lighting on the poles should be given preference to manufacturers known in this industry. This list includes companies such as Nichia, Philips, Osram and Cree. The products of these firms have excellent lumen / watt luminous flux rates. In addition, these products correspond to our climatic conditions.

The disadvantage of LED lamps is the spectrum of the glow of the lamp, which depends on the temperature, and its adjustment occurs according to the main purpose – for household or for industrial needs. 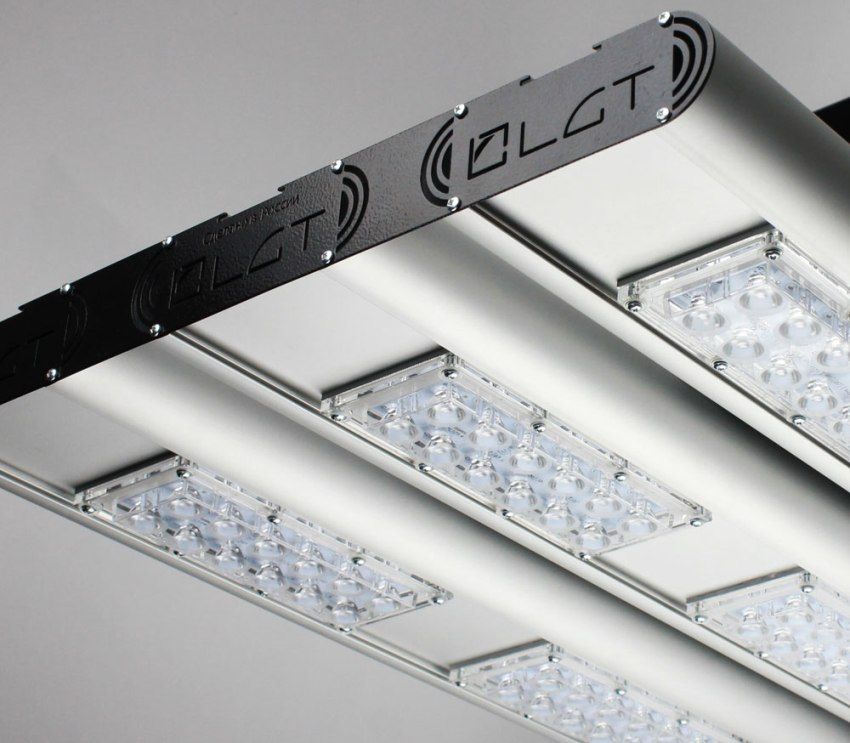 Also, LEDs are not recommended for use in places where humidity and temperature are excessively elevated. Nevertheless, lamps of this type are very popular, so they are widely used in domestic and industrial environments. They are especially relevant in modern street lighting.

The main types of street LED lamps are the following devices: lights, spotlights and decorative lamps. The most common in this list are the lights, so on a more detailed description of this type we dwell separately.

Floodlights as street lighting are most common in industrial environments. They are installed in the spacious territories of enterprises, in parking lots, stadiums and are used to illuminate the buildings of administrative institutions. Most often, spotlights are used as industrial street lamps on poles.

In everyday life from the products of this category apply small-sized feeble LED spotlights. With their help, they illuminate the house territories and estates. Instruments can emit white or multicolored light. Searchlights mounted at different angles of light emission. They install, as a rule, lamps with a capacity of from 90 to 400 watts. 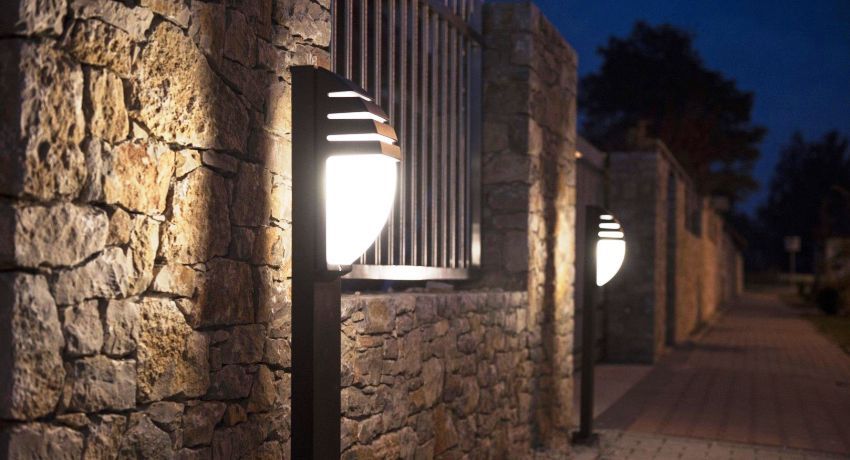 As decorative lamps use sets of various LED-cords:

The use of street LED lights on the pillars is very wide. They provide coverage of highways, highways, gas stations and streets in populated areas. Less powerful copies are used in the courtyards of houses and budget organizations, in parks. The lanterns used for these purposes differ in their design and in the nature of the light that they emit. 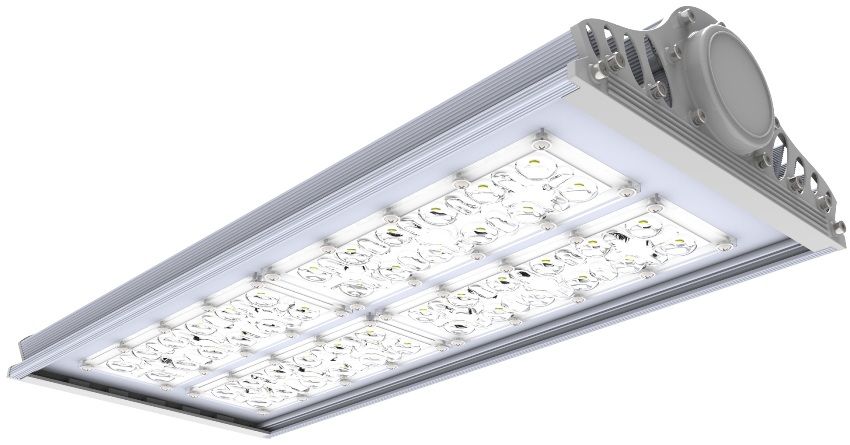 Helpful advice! It is better to entrust the drawing up of a project, the choice of a specific type of lighting and its installation to specialists. They will perform all the necessary range of work. In addition, reliable contractors must provide warranty and post-warranty service.

In order to illuminate roads and highways, they use reflector lamps on poles, which provide for the diversified distribution of light. For this purpose, lamps of up to 400 watts are installed in the lamps. In devices used on poles placed at petrol stations, near-house territories, in parks, squares, yards of private houses and cottages, lamps with diffused light up to 150 watts are mounted. Such a combination provides an “extensive light intensity curve,” which consists in the uniform distribution of illumination in a certain area.

The poles intended for fixing the lamps on the street are made from various materials. Their various types can be found on the streets of cities or highways. The most popular ones are as follows: 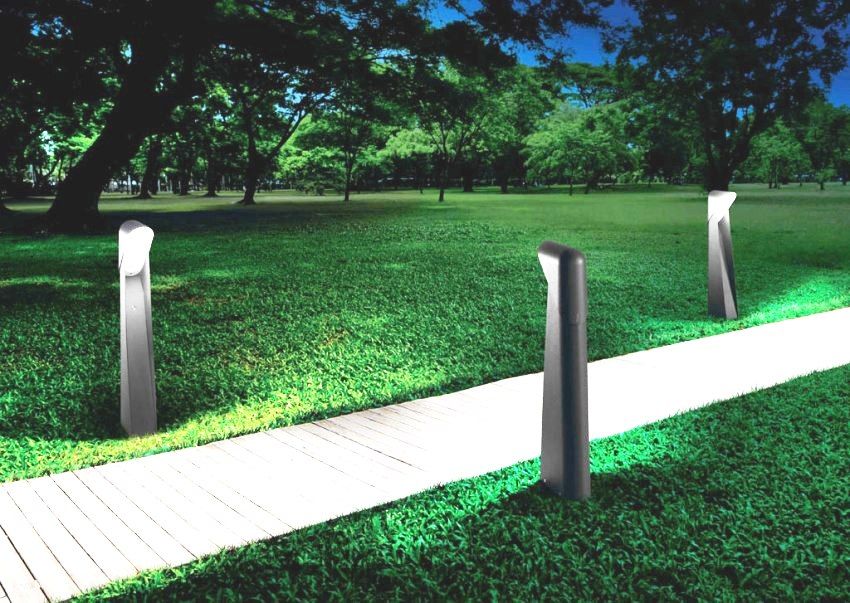 The main requirement for supports is as follows: they must be durable and resist wind, humidity and temperature drops. According to experts, the best option is street LED lights on metal lighting poles, as they are durable and durable. The features of the pillars, which have a tapering structure at the top and a hollow inner part, make them both light and strong, which simplifies installation work and reduces the cost of their installation.

Of all the options, the most popular are street lamps on round poles of galvanized steel, the length of which varies from 3 to 12 meters. Such supports are widely used in parks, on the streets, highways and other places. Higher structures (over 12 meters) are installed at railway stations, stadiums, as well as on motorways, bridges and spacious squares. 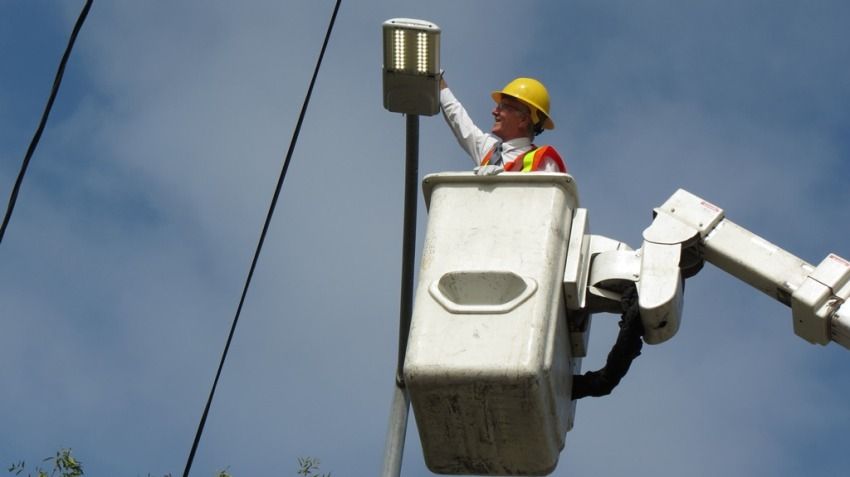 The predecessor of LED lamps are DRL devices, which are decoded as an arc mercury phosphor lamp of high pressure. Such devices in many respects lose due to a number of characteristics to diode devices, but in many respects surpassed their predecessors – incandescent lamps. In addition, it should be noted that the price of a street lamp with DRL lamps is much more attractive than the cost of its LED counterparts. Lamps with DRL lamps, depending on the application, are divided into two main types: cantilever and crowning (or floor lamp type).

Helpful advice! To avoid damage, the body of the cantilever lamps must be equipped with impact-resistant glass necessary to protect the light elements.

Console fixtures got their name from the external drop-shaped appearance. They are fixed at an angle of 15 ° in relation to the horizontal surface. Most often for street lighting cantilever street lamps on DRL posts 250 W are used. In some cases, depending on the illuminated area, they can install lamps of 125 and 400 watts. The price of the product depends on this indicator. 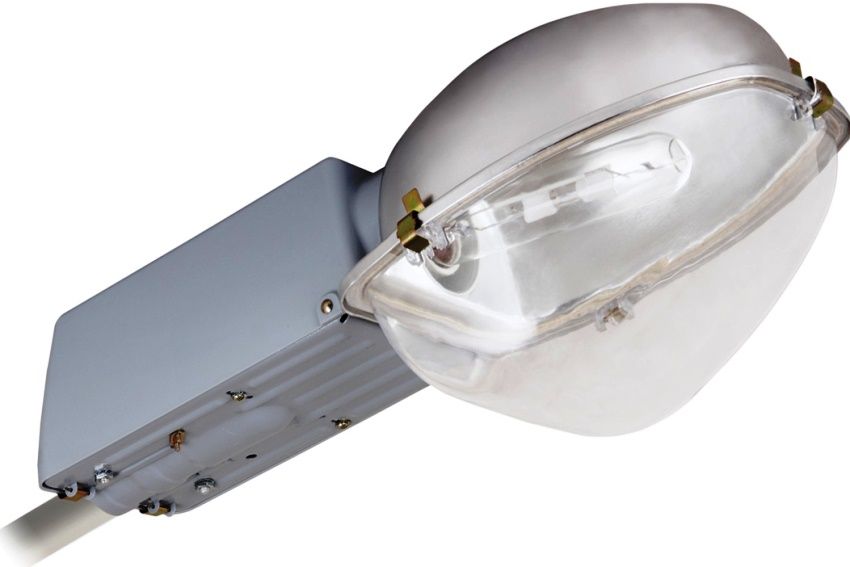 Crowning, or lamp-lamps, are the street lamps that are common to many people — balls on poles. For their production using frosted or clear glass, as well as polycarbonate. The basis for such devices are various decorative pillars or pedestals. The height of this design, as a rule, does not exceed five meters.

Lamps are also produced in the form of an inverted cone, equipped with a device for diffusing light. This type of lighting is considered decorative. It is used as lighting and decoration in the garden plots and in small parks and squares. Power lamps DRL – 125 or 150 watts.

One of the most common types of lamps – console. Their design involves one rigid mount. The main element of fixation is the bracket, sometimes its function is performed directly by the body of the lamp itself. Install cantilever street lamps on poles – and not only. They are mounted on masts, on supports in the form of a floor lamp, as well as on various engineering and architectural structures. 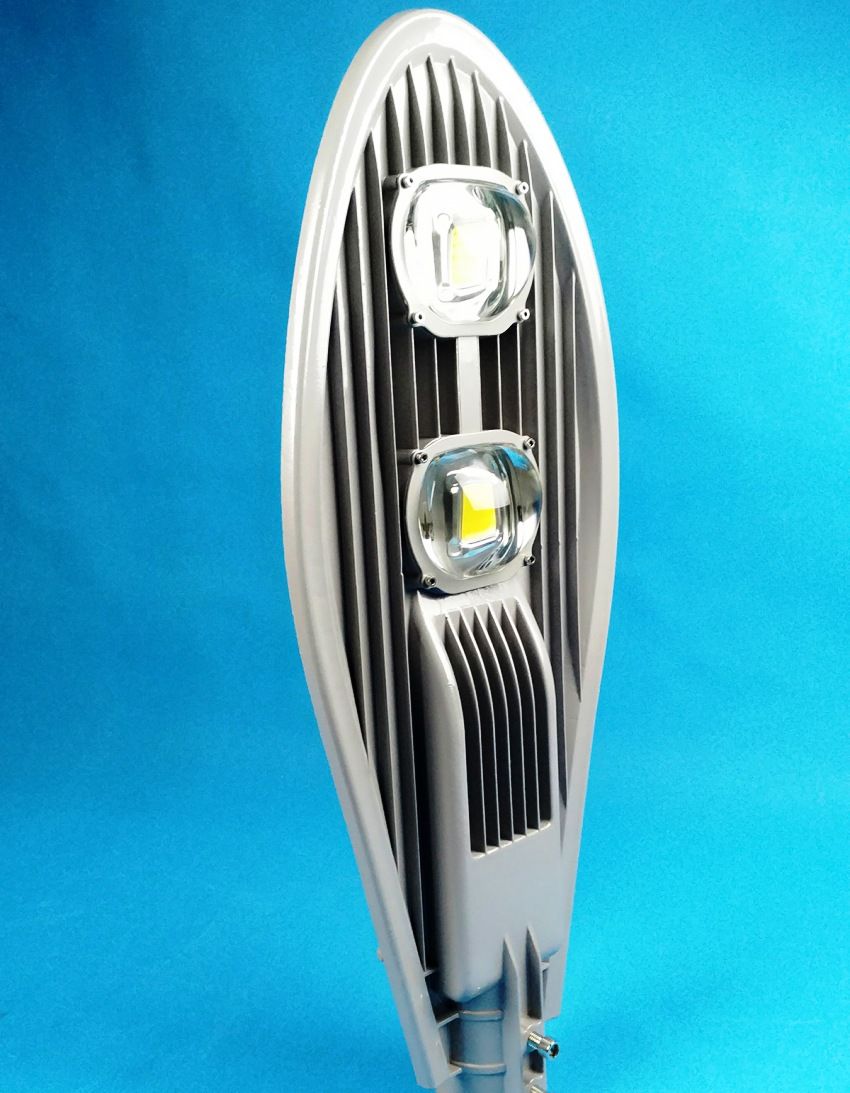 For the manufacture of body use reinforced polymer, cast aluminum or steel. Metal parts are coated with a special paint that prevents the formation of corrosion. Accordingly, the price of a street cantilever lamp for poles depends on the material of manufacture and additional equipment. The bracket is made with a hole having a diameter of 46-60 mm. In the middle of the body, as a rule, a control gear, a power supply unit and directly LED lamps are located.

The housing of the illuminant is equipped with a mechanism that facilitates the removal of heat from diode lamps, and its optical part contains reflectors, a light diffusing device and optics for distributing light in the desired direction.

The total price of street lamps for poles also includes the cost of design and installation work. It is better to entrust them to professionals. There are special firms engaged in this type of activity. They can be found on the Internet, but before that it is recommended to make inquiries, consult with experienced builders and read comments on specialized sites and forums.

Modern LED-lamps are rapidly gaining primacy among other lighting devices. Moreover, their initial high cost is compensated by quick payback and further substantial savings. Devices differ in wide sphere of use, profitability, reliability and durability. Can work both from the electric power, and on solar batteries. Street lamps on poles are often equipped with photorelays, which guarantees additional savings. The product range is very wide, including products manufactured by the owner of a well-known brand, as well as exclusive and designer models.

An indispensable attribute of two-storey cottages and country houses is the staircase. The structure
A unique offer for you

Fireplace in the living room interior: photos of traditional and modern models

Prosekatel for a metal profile under drywall: types and characteristics

Toilet bowl: how to install the device depending on the type of construction

Dining group for the kitchen: a spectacular and functional set

Humidifier for children: which one is better to buy a humidifier in the nursery