Energy-saving technologies are rapidly developing, for example, a more economical fluorescent lamp came to replace the incandescent lamp in the last century. Its main competitor soon became a street LED lamp. A lamp with such lamps provides maximum energy savings and, accordingly, money. This article will tell about the peculiarities of this type of lighting on the streets, species diversity and criteria for choosing LED-lamps. 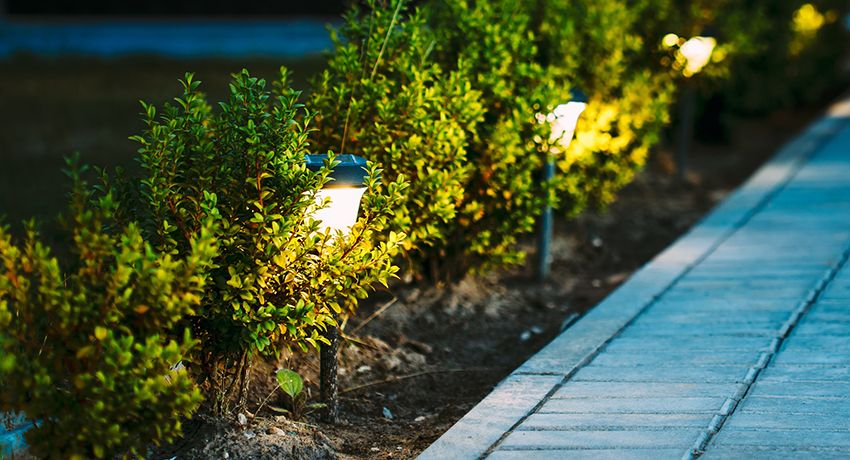 The history of the development of LED street lighting

Street lighting appeared in the XVI century. In wealthy districts of London, lights were installed with candles. Two centuries later, kerosene lamps replaced candles. This type of lanterns was much cheaper, and the light radiated more bright. Street lighting is becoming massive, it is organized in all major cities. In the 19th century, gas lamps were invented, which were distinguished, on the one hand, by their enormous economic efficiency, and, on the other, by their increased explosiveness. In some cities, this kind of street lighting existed until the middle of the last century. 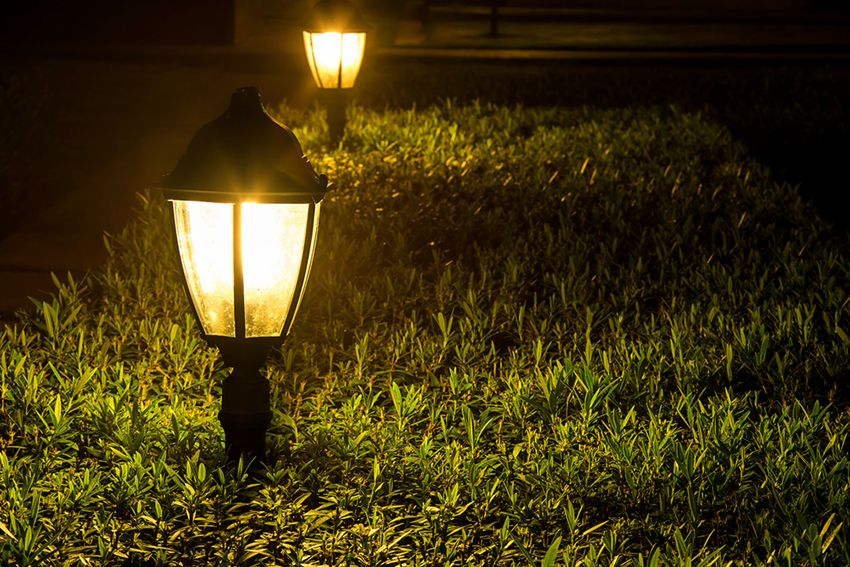 Illumination on a global scale began with the advent of the twentieth century, when electricity was invented. Incandescent bulbs for a long time did not give up the leading positions until they were replaced by gas-discharge and fluorescent lamps. They are now actively used throughout the progressive world. Gradually, they are beginning to replace more economical and environmentally friendly LED-lamps. LEDs were invented about two decades ago, and their popularity is rapidly increasing. Most developed countries have already switched to street lighting with LED lights.

Luminaires of this type guarantee a good level of illumination and provide decent cost savings. LED lamps of street lighting are popular among owners of private houses and seasonal dachas. They are used as a backlight for ponds, trees, flower beds and fences. Recently, such devices are widely used on motorways, streets and roads, in the courtyards of high-rise buildings, to highlight commercial and administrative buildings, in parks and other recreation areas.

It is important to know! In English, lamps on diodes denote LED, which means “light-emitting diode”. The abbreviation has taken root in Russian. Thus, LED and LED are synonymous words.

The effect of light emission from a solid body was discovered at the beginning of the last century in England, but for a long time the development was not improved and was prohibitively expensive. Only at the beginning of the 21st century, the technology was simplified, and lamps of this type were launched into mass production. They differ significantly from their predecessors, having a number of specific advantages, among which are the following: 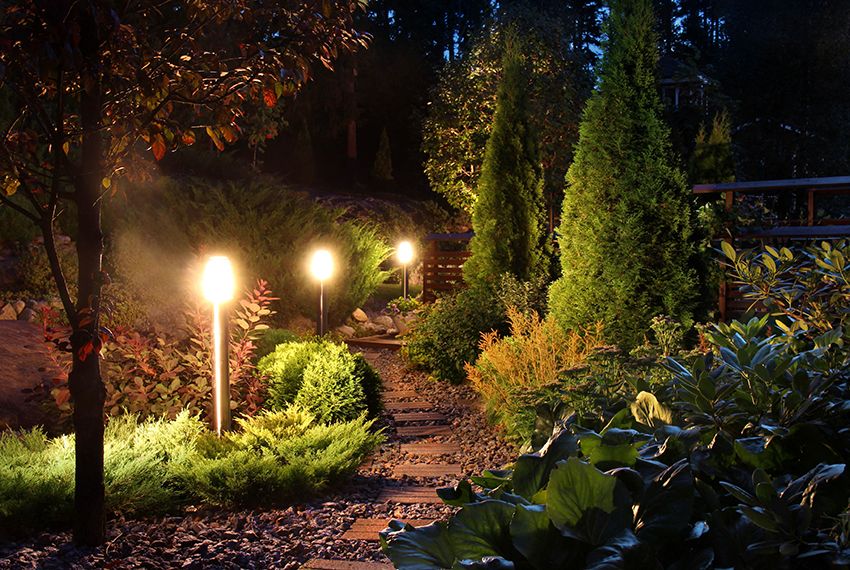 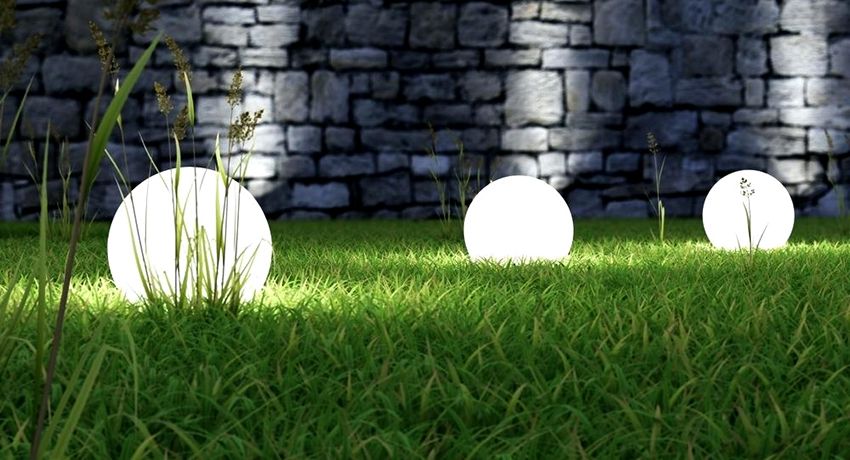 The list of shortcomings is much smaller than the list of advantages, but they still exist, the main ones are as follows: 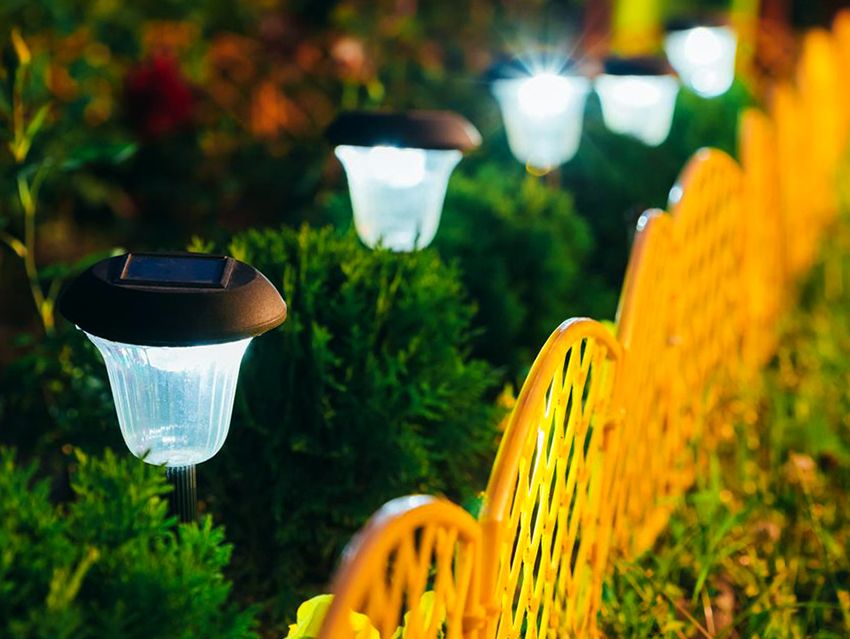 Helpful advice! High quality LED lights directly affect the cost of devices. The better the materials were used in the manufacture, the higher the price of the device, the longer the life of the devices, even in the harshest conditions.

LEDs have a fairly high level of efficiency (COP). This characteristic distinguishes this type of luminaire from gas-discharge lamps, in which light is emitted as a result of a gas electric discharge. If you make a comparison in figures, the following picture emerges: a 10 W diode lamp is equal in performance to a 40 or 60 W incandescent lamp. This feature arises due to the transition of conductivity between different types of semiconductors and the emergence of recombination of photons with electrons.

Simply put, electrical energy is converted into light energy. At the same time, the process is low-cost, since it is based on the latest achievements and discoveries in physics. Thus, the energy-consuming, short-lived incandescent lamps and unreliable gas-discharge lamps have been replaced by more reliable, superpowerful, compact, and most importantly, cost-effective lighting devices. 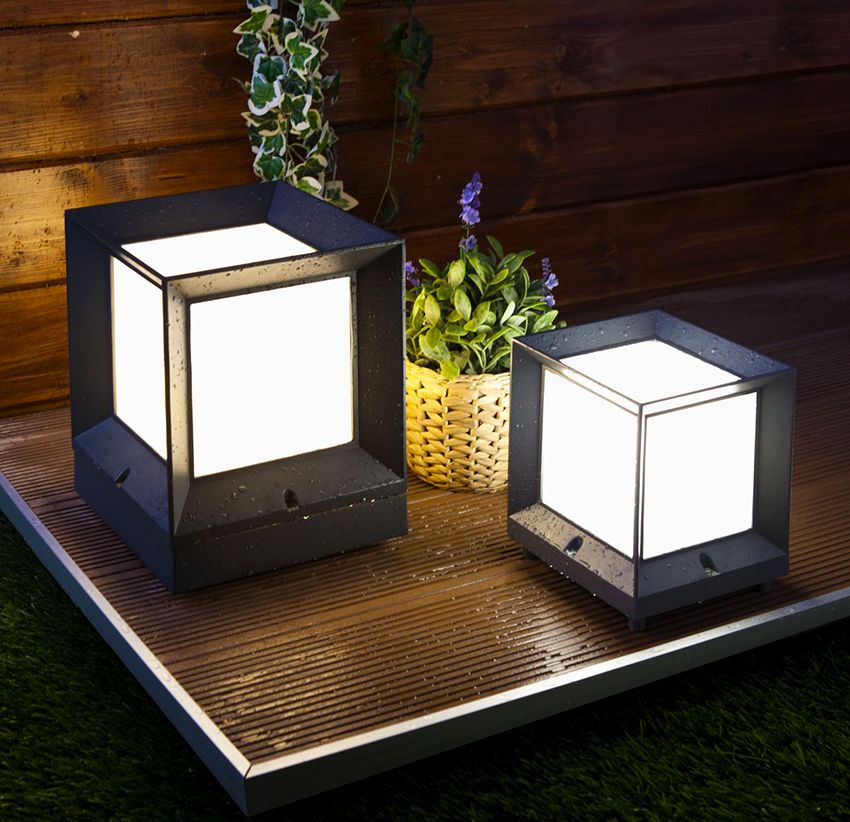 In addition, the manufacturing technology of lamps for street lighting allows you to change the color and warmth of the lamp light. Such technical characteristics justify the high popularity of LEDs in the clarification of private houses, and for outdoor lighting of city streets and roadways.

As for the design of street lighting fixtures with LEDs, it differs significantly from the device lamps for indoor lighting. Due to the different structure of electrical installations, devices have a different principle of fastening. Street lights are designed for high placement and vertical lighting. The LED-lamp itself is a set of LEDs that are mounted in an aluminum housing with special protection.

Devices used for lighting on the street, are characterized by a wide scope of application and, accordingly, have their own classification system. The luminaires are grouped according to typical similarity, they are distributed into different types and models, depending on the specific characteristics. They classify the light fixtures on diodes according to the following main features: 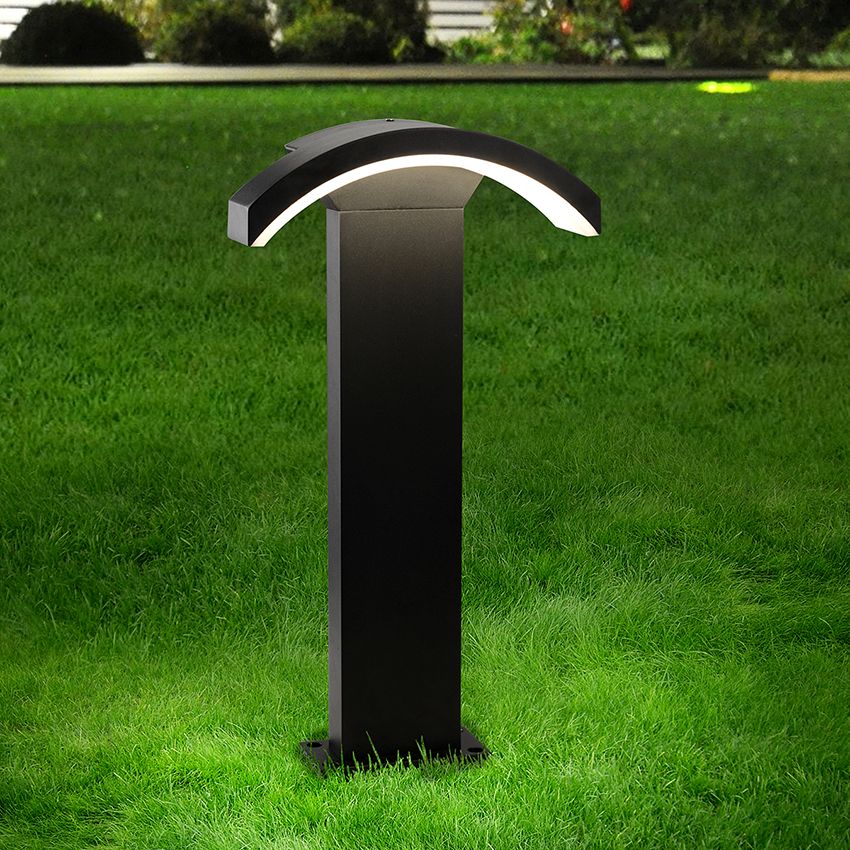 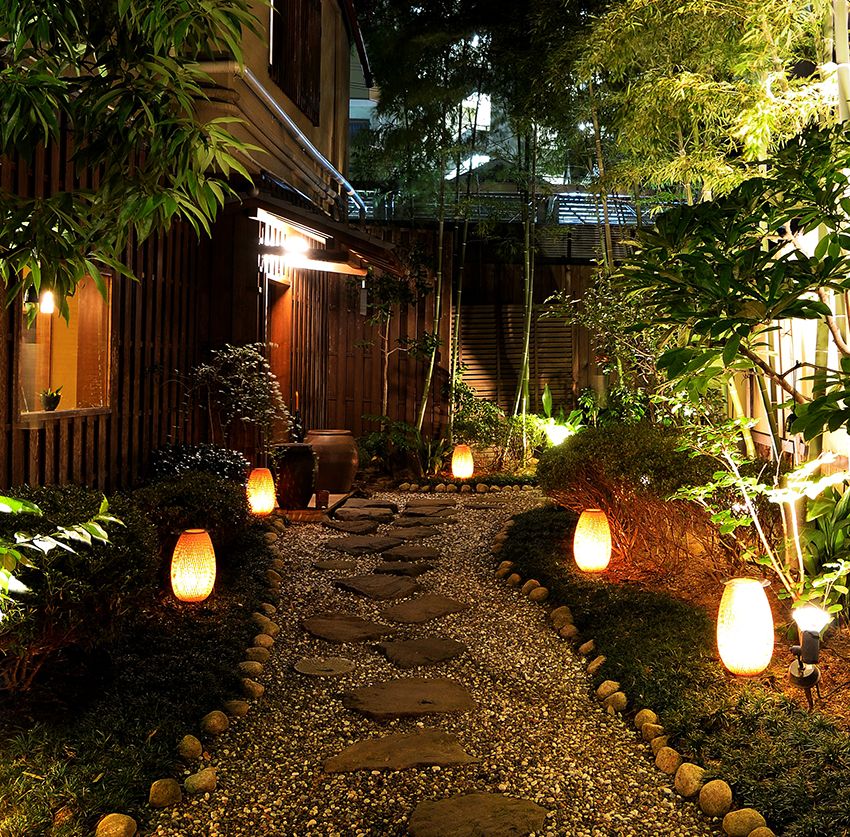 Helpful advice! It is the last three criteria, such as functionality, power and design that underlie the specific classification of devices and their choice for lighting in private conditions.

In order to determine the level of protection of lamps against external factors, a special international system Ingress Protection (IP) was developed. This indicator includes only two figures, where the first indicates the degree of protection against dust penetration, and the second is the index of protection from moisture. The degree of protection, as well as other species criteria, is determined using a special international marking table. Marking is applied to all products of mass production, without it the goods are not allowed for sale. An index is a specific set of letters and numbers, where each character has its own meaning.

The first letter indicates the type of lamp installed in the luminaire (incandescent, fluorescent, mercury or LED). The second symbol indicates the type of installation of the device, for example, a suspended, console, support, floor, recessed, ceiling or street LED lamp on the wall. The third letter defines the purpose of the device (for example, for street lighting or for industrial facilities). 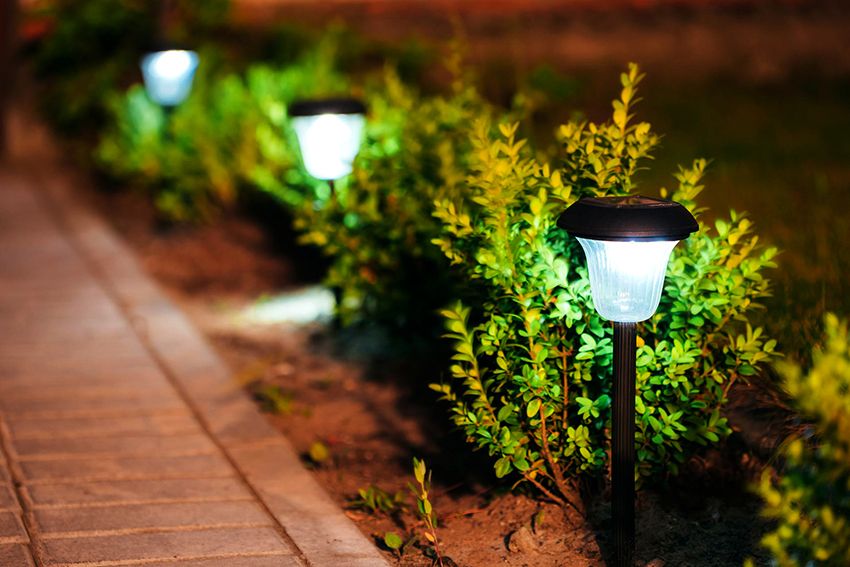 This is followed by a figure indicating the number of the series, and the next – the number of light bulbs in the lamp. The sixth value is the maximum power of the device. Product modification defines a three-digit number located seventh in the general mark. The letter and number cipher at the end of the label indicates the climate conditions in which the use of the product is permissible.

LED devices for outdoor use are of various kinds and are used for decorative lighting or main lighting. Marking may also indicate additional functions, for example, that this device is an outdoor LED lamp with a motion sensor.

The main distinctive feature of the lantern is the ability to uniformly disperse the flow of light. Devices are of different shapes and sizes, but the main difference in the list of models is their power, which determines the location of the lamp.

In the lighting of highways and highways apply lights from 400 watts. For roads of secondary importance install lamps with this indicator from 150 to 250 watts. On sidewalks, pedestrian areas, as well as in parks, squares, courtyards of high-rises, on sidewalks, use of lamps with a power up to 150 watts is permissible. For road lighting the most suitable are reflex LED street lighting lamps that can change the direction of light flow. 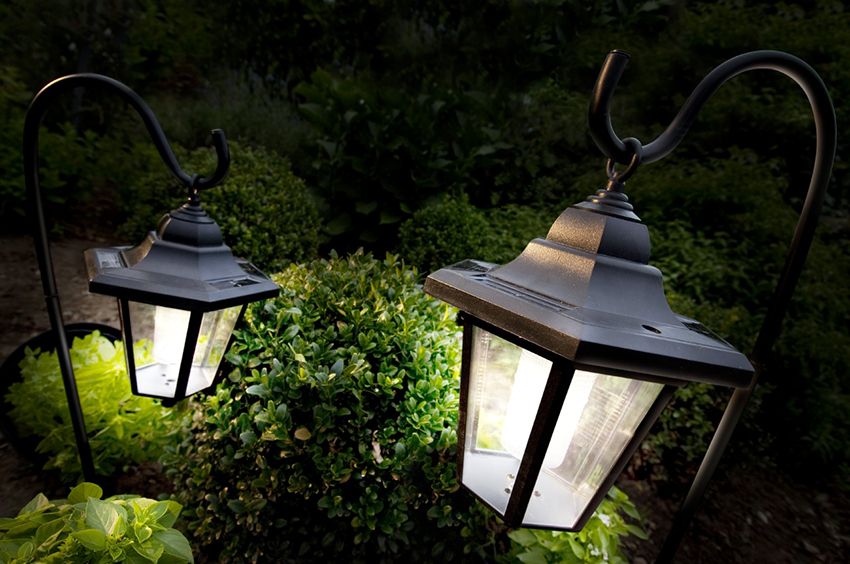 To properly organize the lighting, applying this type of fixtures, it is necessary to learn a number of rules. Independently install such devices can only be on a small plot. Therefore, all work, starting with the choice of power lanterns, it is recommended to entrust professionals. They will design the street lighting, calculate the overall brightness of the lamps, determine the technology for controlling the lighting system. The experts themselves, according to the project, will pick up the lights and carry out their installation.

Helpful advice! It is not recommended to independently carry out repair of LED lamps, especially since manufacturers install a long-term warranty on most products with diodes.

The device of diode lanterns of street lighting is similar to the structure of the LED flashlight. The design includes a housing with a reflective element, a block of diodes, heat sink radiator. The space between the parts is filled with special thermal grease. Outdoor lighting fixtures provide strong shades. To adjust the voltage in the middle set the transformer.

It is autonomous devices that are most often used in the design of landscape design and as emergency lighting.

Thus, any type of LED street light has a certain list of advantages. In this case, the complexity of the installation compensates for the lack of need for maintenance during operation. This type of light source will not only provide good lighting, but will also significantly save money spent on the use of electricity by other types of lamps.

If you have to facing the facade of the house: what material is better

Usually after repair or redevelopment comes the time of design registration of the home.
A unique offer for you

LED lighting for the kitchen under the cabinets: features of choice and installation

How to calculate the number of reinforcement for a strip foundation

Laminate or linoleum: what better to use for flooring

Pavement tiles in the yard of a private house: photo compositions

Laminate in the interior of the apartment: photos of vivid examples of room decoration

Terraces and verandas to the house, photo projects and design options