The traditional dimmable light bulb, which shines brightly but consumes a lot of energy, has been replaced by a dimmable LED lamp. Products are developed by a special technology that allows you to smoothly adjust the intensity of the luminous flux. This feature allows not only to save electricity, but also has a beneficial effect on human health. What caused the popularity of this device is described in detail in this article. 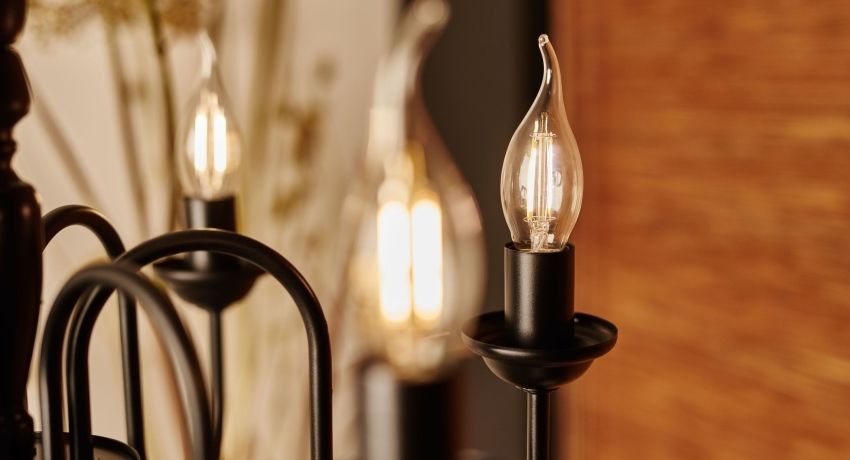 How does the LED lamp

LED lamp in appearance does not differ from the traditional light source. The design of the device is represented by a standard base with a normal thread. Therefore, the lamp can be used for conventional cartridges, which eliminates the need to change the electrical equipment of the room. However, these devices have significant differences in the internal configuration. 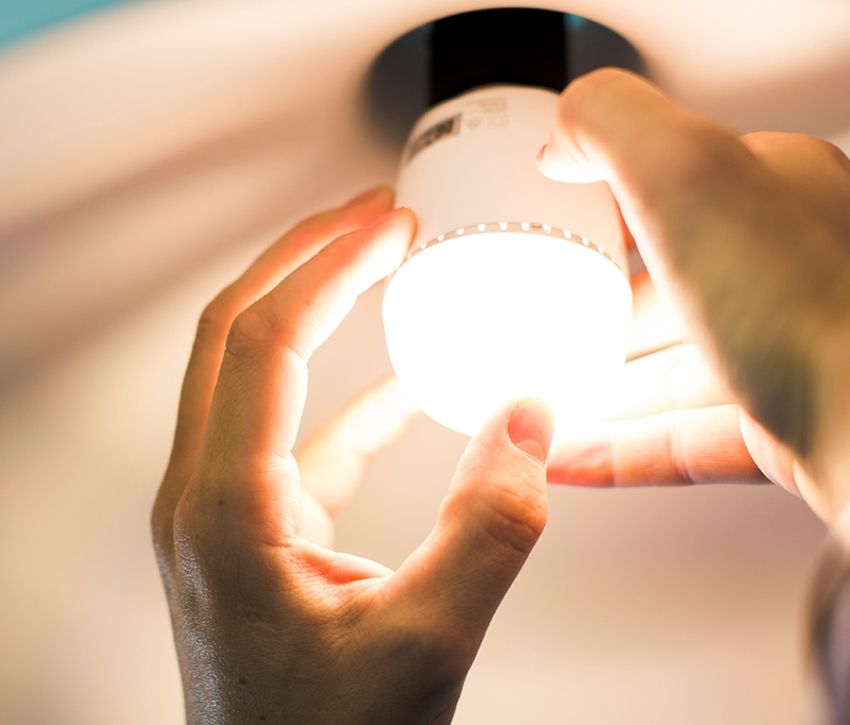 The design consists of a contact base, a housing that performs the function of a radiator, a power and control board, a board with LEDs and a transparent cap. These devices cannot be used for 220 V mains, as they will not work with such voltage and current. To prevent burnout, the lamp housings are additionally equipped with a power and control board, which reduces the voltage and rectifies the current.

The principle of operation of the LED lamp is based on physical processes, the essence of which lies in the appearance at the point of contact of two elements from different materials of the light flux, immediately after an electric current was passed through these substances. The main paradox of this phenomenon is that both elements are semiconductors capable of passing electric current only in one direction, and this is assuming that they are interconnected. 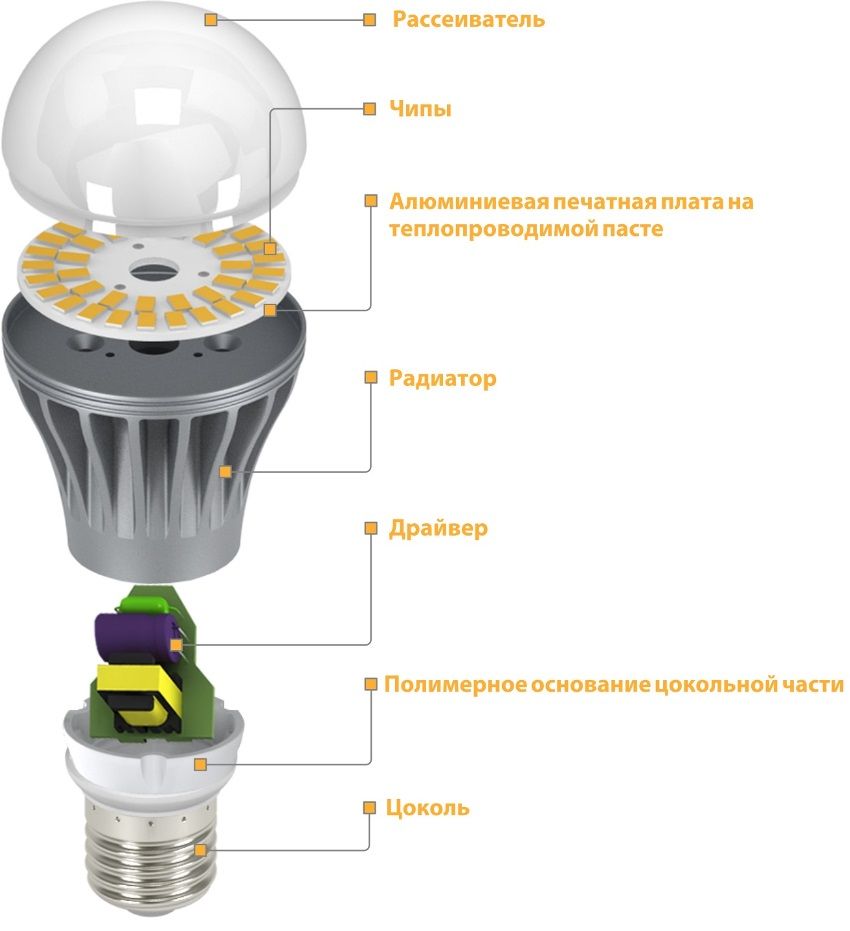 Here too, the transition of a substance from one state to another occurs, which is accompanied by the release of thermal energy. In electronics, devices that are capable of not only passing current, but also emitting light, are called LEDs. Such elements cover the entire spectrum of light radiation. In this regard, there are LED lamps in blue with a source of cold light and yellow or red – with the effect of a warm glow.

The main difference between dimmed and traditional lamps is the presence of a dimmer for LED lamps in the device housing, thanks to which the lamp brightness is continuously adjustable. Dimmer output power is the main parameter of the device. The maximum number of connected lamps depends on its value. Dimmer works as a resistor. It allows you to smoothly adjust the brightness of incandescent bulbs.

The LED lamp with dimmer is equipped with a block with the function of pulse-width modulation. It is used to control the stabilizer located in the device, due to which the brightness of the lighting changes. Adjustment of the intensity of radiation occurs through the way the voltage supplied to the LED. Here a sinusoid is used, where the period of time under voltage is respectively equal to the value of time without voltage. To increase the brightness, it is necessary to increase the time of voltage supply, and to reduce it, you should increase the period of time without voltage.

Important! You cannot connect a conventional energy-saving lamp through a dimmer. The device is designed for a certain number of cycles, and the constant blinking will contribute to the rapid burnout of the light bulb.

The change in the frequency of the blinking of the bulb occurs imperceptibly to the human eye, as a result of which the illumination varies in the range of 10-100%.

According to the control method distinguish dimmers: 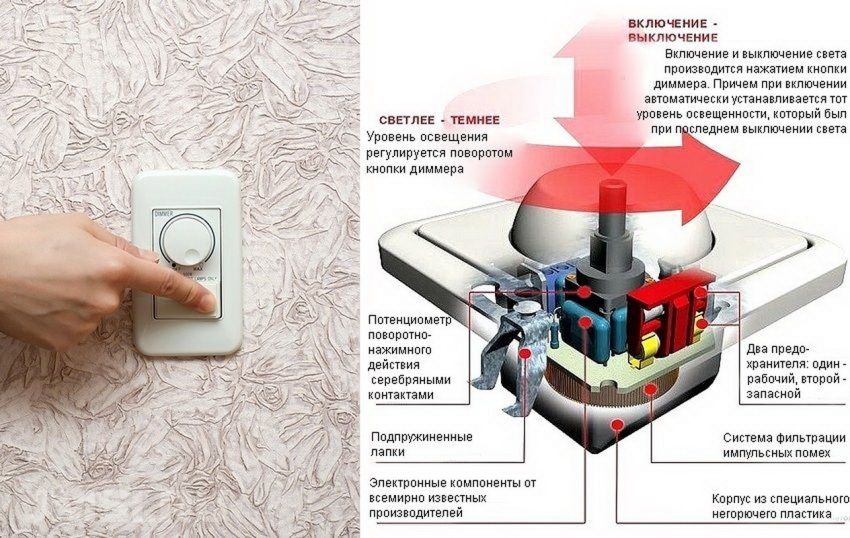 The light intensity of the rotary dimmer is carried out using the rotary knob. Rotary-pressure devices are driven by mechanical pressure on the handle. When it rotates, the brightness of the light bulb is adjusted. The degree of illumination on the keyboard devices is selected by the method of repeated pressing a button. The choice of the required mode on the touch dimmers is carried out by touching the control panel with a finger.

Today, you can buy a dimmable LED lamp of a special design, which, due to the light touch of a button located in the central part of the panel, turns on the light, and a long touch touches the lamp brightness.

Depending on the location of the device may be: 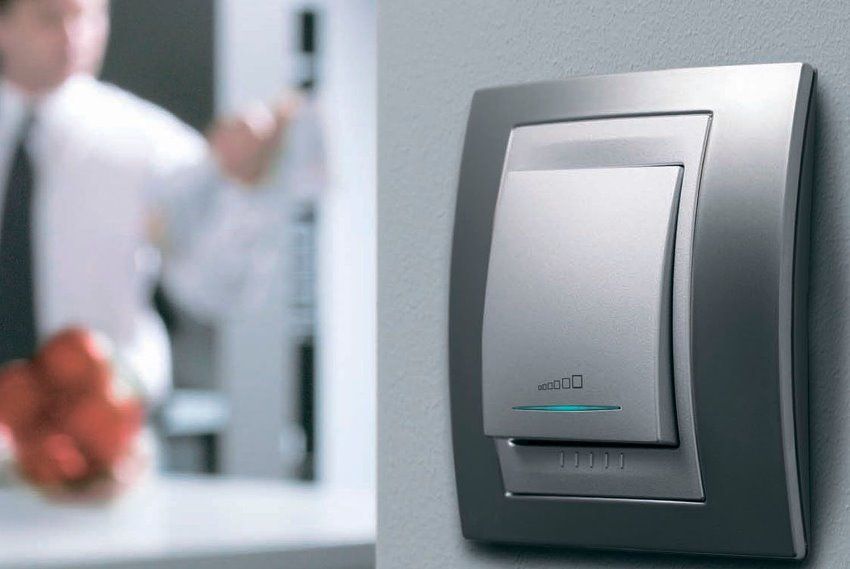 In the first embodiment, the dimmer is combined with a switch. Modular devices are mounted on a DIN rail in a distribution cabinet. Such devices are usually mounted in the stairwell. They are often chosen by the owners of private homes. The devices perform basic adjustment functions and are hidden from prying eyes. The last type of dimmer is embedded in a special mounting box.

Depending on the functional characteristics distinguish dimmers:

The operation of mechanical devices is regulated by means of a wheel with a button. Setup of the device is carried out in the manual mode. Electronic devices are equipped with a sensor, a touch panel and automation. Remote devices are capable of receiving a signal at a distance, so the degree of illumination can be adjusted using the remote control. Acoustic devices are triggered by a clap or voice command. 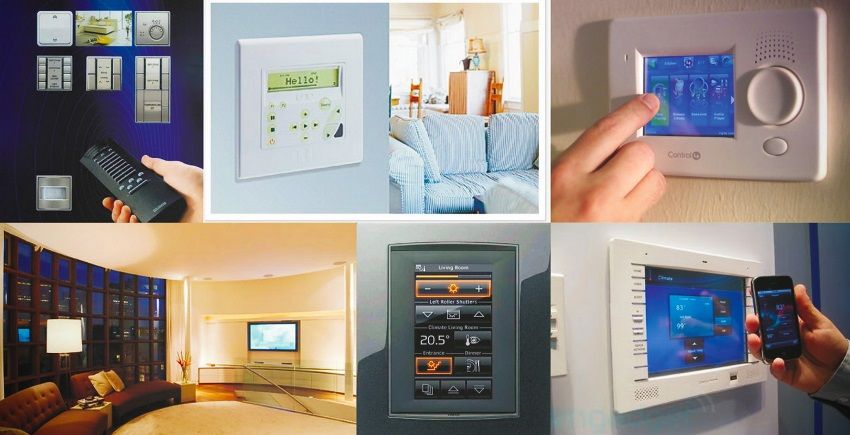 The most popular are the turning devices, which are mounted in the sub-slot. Such devices are easy to install, manage and have a low cost.

Due to the fact that the design of the LED dimmable lamp includes a special driver, you can adjust the intensity of light. When there is no need to operate the lighting device at full power, you can reduce the brightness. This will help reduce electricity costs as a result of economical electricity consumption. Smooth intensity control will extend lamp life.

With the help of dimmers, you can zoning the room, set bright accents or change the atmosphere in the room. Such devices are often used to create colorful and vivid effects for presentations or promotions. The use of dimmers has a beneficial effect on human health. After all, when the bright light is switched on abruptly, an unpleasant sensation of light perception by the pupil of the eye arises, and dimmable LED lamps can be immediately switched on by only 10%, gradually adding intensity, which will not cause eye injury. Thanks to the built-in dimmer, the LED lamp does not emit UV rays and IR spectrum. 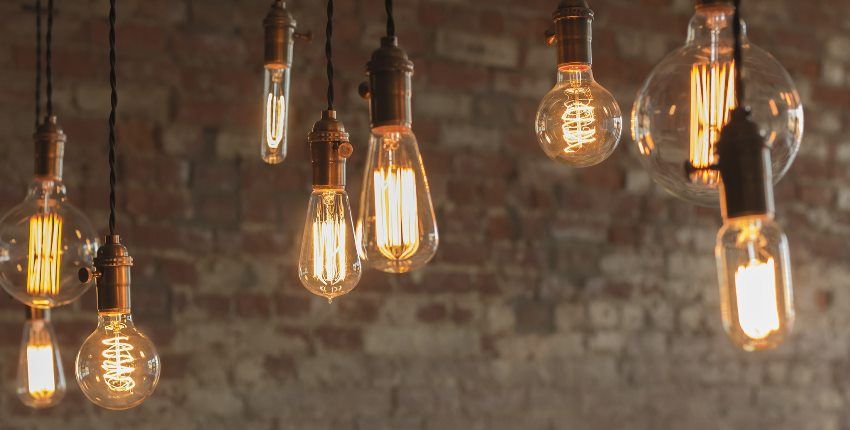 Dimmable lamp can be combined with a motion sensor, which will give the signal to automatically turn on the illumination. The combination of dimmer and photosensitive sensor will automatically adjust the artificial lighting under the natural. Modern models can have the function of a smooth start or timer.

Helpful advice! Using dimmers in an empty room can create a sense of presence when the owners of the house are away. This can be a good security system that will automatically turn the lights on and off in different rooms.

The first thing you need to pay attention to when choosing a LED dimmable lamp is the shape of the device. The desired light effect in the room depends on this. Also, the nature of the protective cap, which can be transparent or matte, will influence the nature of the lighting. In the first embodiment, you can get a rich stream of bright light. The product with frosted glass, which is covered with a special coating from the inside, provides an even, pleasant light. 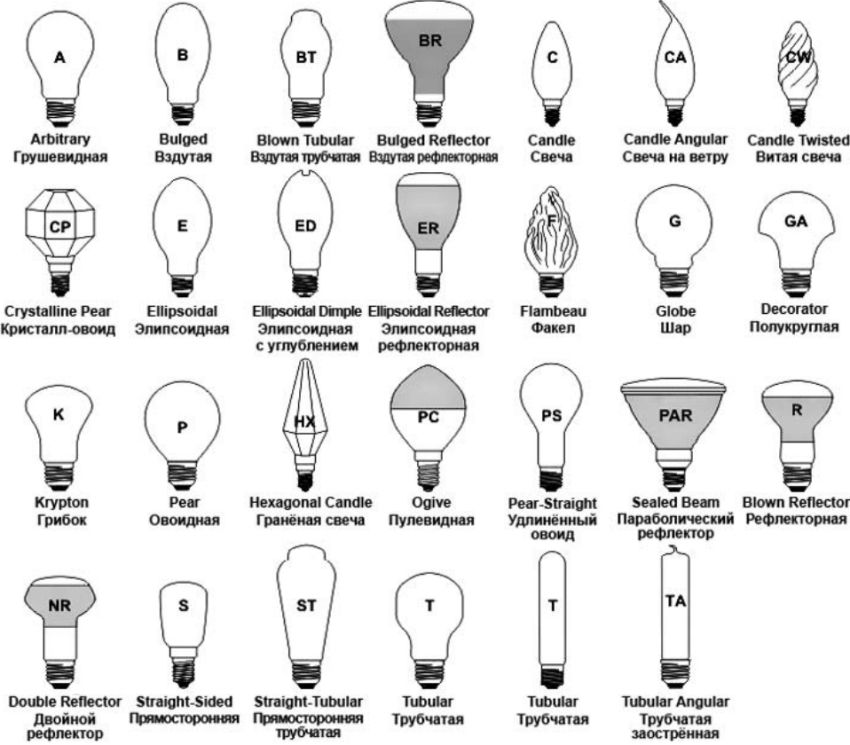 The light in a pear-shaped lamp will be directed downwards, leaving round shadows on the ceiling. The product of a classical form has a lighting angle of up to 240 degrees. For open floor lamps and chandeliers, it is advisable to use a dimming LED lamp E14 in the shape of a ball or a candle with an illumination angle of 240-360 degrees.

Reflector lamps are used to illuminate a specific area, which reduce the luminous flux. For suspended or suspended ceilings are used accent lamps for spotlights. Elements do not emit heat, so they can be mounted in furniture. The angle of illumination of such lamps is 100 degrees.

The next criterion is the degree of light flicker, which is especially important for dimmed E27 LED lamps, which are often used in residential areas. It is impossible to completely eliminate this phenomenon. Therefore, preference should be given to products that have a faint blink. You can define it in this way. During the operation of the device a person needs to transfer the view from one object to another. At this time there is a second weakly effect, when the human eye simultaneously sees several objects. 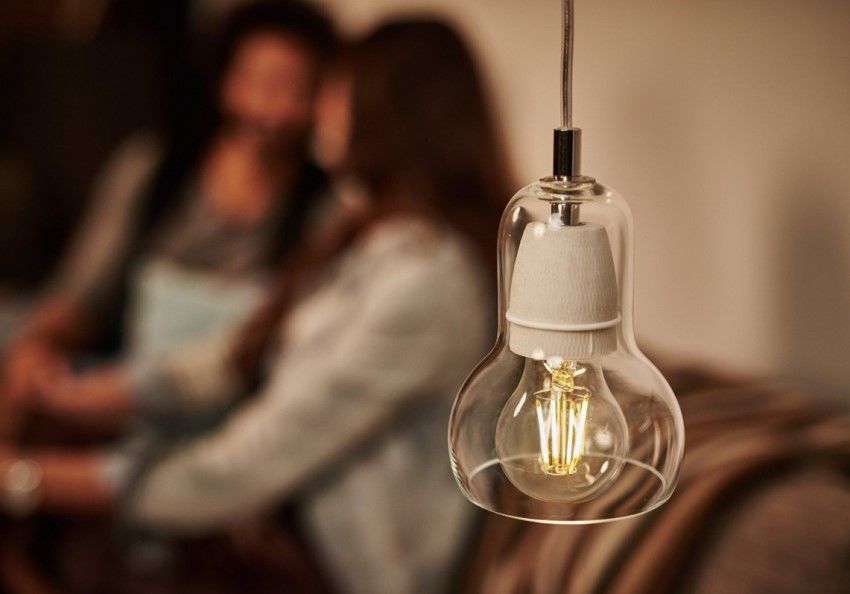 Important! If the lighting device has a strong flicker, it can not be used for living rooms.

Next you should pay attention to the level of dimming. The minimum value for dimmable led lamps is 10%. This suggests that at minimum brightness the product shines quite strongly. Lamps are best matched with the lowest on-off limit.

The manufacture and use of LED dimmable lamps is rapidly gaining momentum. More recently, LED lighting devices could not be used with dimmers. The problem was solved after the introduction of the dimmer into the design of the lighting element. An important condition for long-term operation of the device is compliance with the recommended parameters. Therefore, before you buy a dimmable LED lamp E14 or E27, you should study in detail the characteristics of the product.

An excellent alternative to wooden fencing was a fence made of metal picket fence:
A unique offer for you

Saving on construction: how to make ventilation in a private house

Acrylic bath: sizes, shapes and reviews of popular products
“Norms and rules for the construction of a private house on the site: requirements of SNIP”

Gasoline generator for home and garden: device and characteristics of the unit

Bar table for the kitchen: the perfect combination of working and dining areas

How to build a cheaper house: cheap, budgetary and fast DIY construction from scratch