Panels that are integrated into the countertops are gradually replaced by freestanding counterparts. This is due to the fact that they have a wide range of functions and are more economical. You can independently connect the hob to the mains using the appropriate instructions. Before proceeding with the installation of the device, it is recommended that you familiarize yourself with the safety regulations and the main nuances of work. 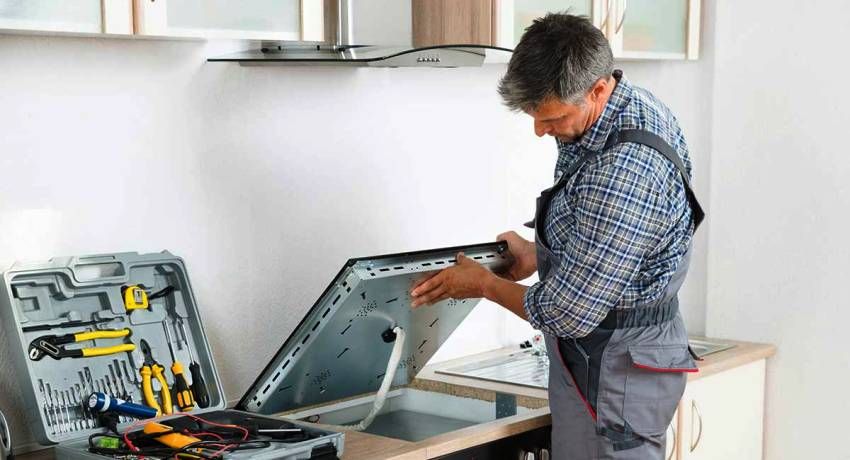 Features connect the hob to the mains

Immediately it should be said that the power of the integrated panels is comparable to that of traditional electric stoves. It follows from this that for installation of the hob a power line of 380 V is required. For this purpose it is necessary to stretch a separate cable from the distribution panel. However, there are certain rules (EIR) that should be followed. 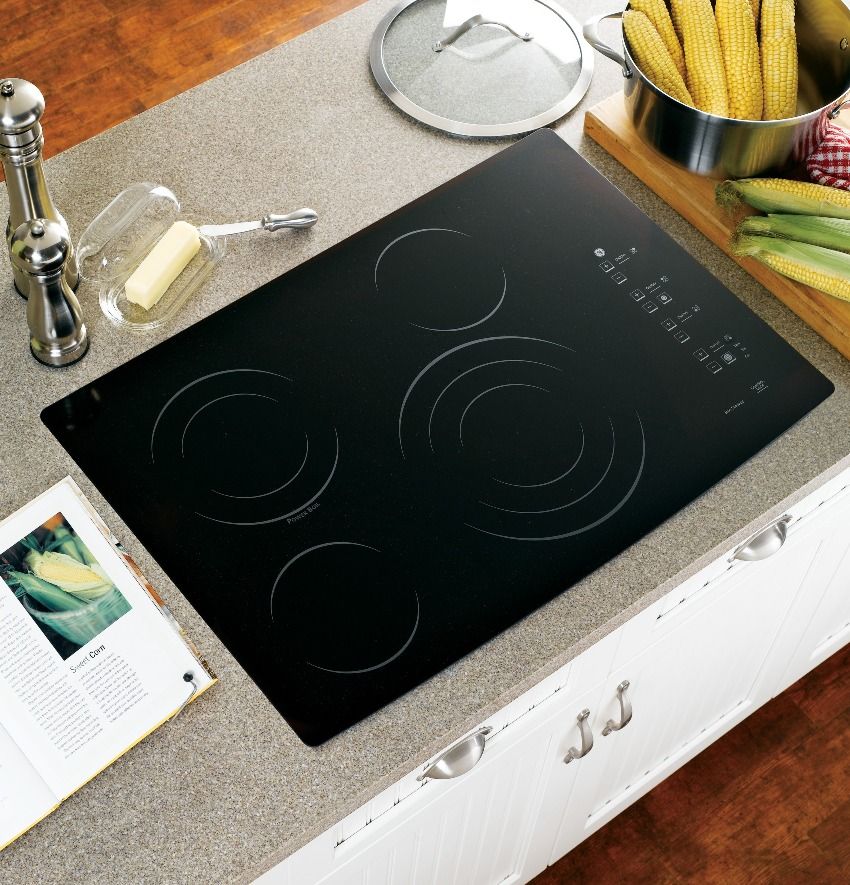 For example, if the network is single-phase, then the cable for the hob is used, made of copper material, the cross section of which is 6 mm? In turn, for a three-phase network it is possible to use wires having a minimum cross section of 2.5 mm ?.

Note! It is very important to ensure the correct connection of the device to the line. In no case should several household appliances be connected to the same line, as this may provoke an overload in the network.

It is worth noting that when using a separate line to connect the hob requires the installation of a protective machine (RCD). For these purposes, 32 or 40 A devices are best suited.

Features of the process of connecting the gas hob entirely depend on the type of device. Currently, dependent and independent recessed boards can be found on sale. The first ones are installed together with the oven, and the second – as an independent device. Independent devices are connected to the mains through a special box that is mounted at the entrance. Through it is wired to the heating zones. 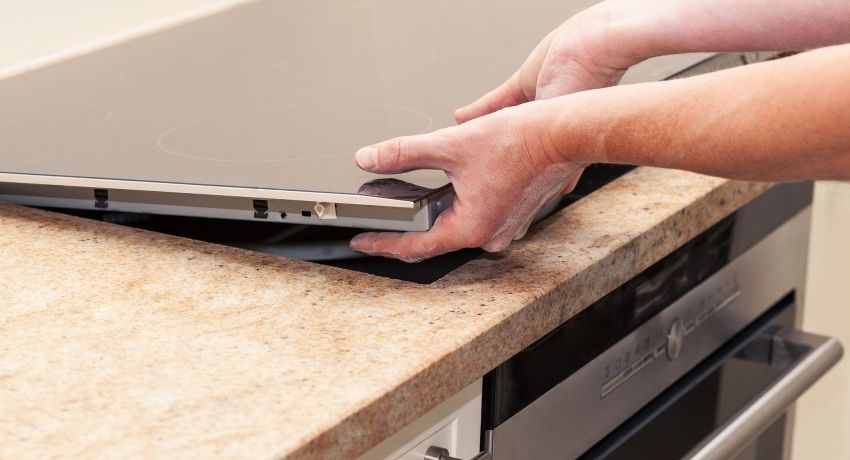 You should know that there are integrable plates containing rapid type heaters. In this case, you need to perform electrical wiring for each element separately.

Another common type of integrated plates – induction. Such models are the most difficult in terms of self-installation. Connecting the induction cooker is best to be entrusted to qualified specialists, since the probability of making mistakes in this case is the highest. In urban apartments, gas or combined appliances are most often installed.

Proper cable selection is a necessary item that should not be ignored. There are two main parameters that you should pay attention to when choosing a wire for a hob: 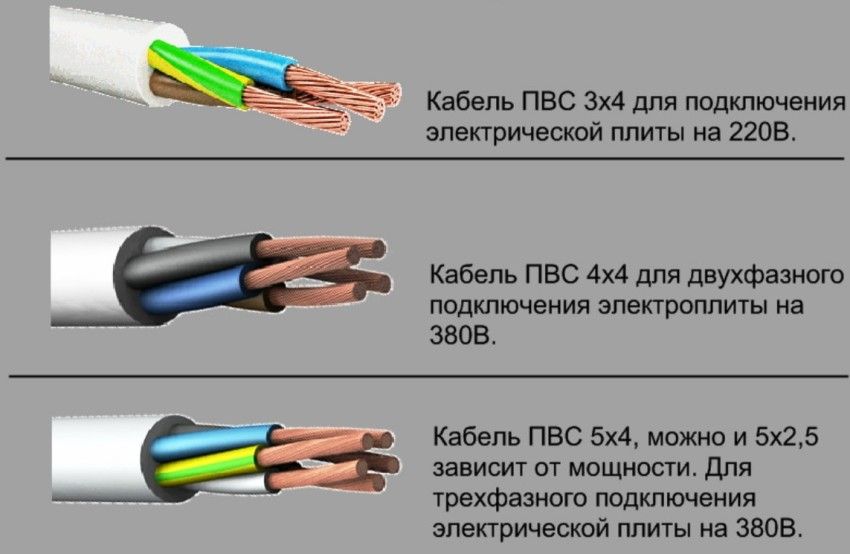 The number of wires in the cable is selected depending on the number of contacts in the terminal block of the connected electrical device. Cooking surfaces, as a rule, have only two options for joining – to 3 or 4 cores. A cable for a cooker containing 3 cores is usually used when it is necessary to connect the cooking surface to a single-phase network. In such a system, the voltage is 200 V.

If the junction box contains 2 or 3 phases, which corresponds to a voltage of 380 V, then it is recommended to install the device according to other rules. The best option in this situation would be to connect the device according to the scheme, which takes into account 4 wires. Additional wire allows to reduce the voltage in the line, which will increase its efficiency.

After determining the number of cores located inside the wire for the cooking stove, it is necessary to select its optimum thickness. The choice of this indicator is made taking into account the power of the panel for cooking. The most common variants of the cross section today – 2 and 4 mm ?.

It should be noted that cables with a thickness of 6 mm are not suitable for low-power devices. When choosing a wire is also recommended to pay attention to its type and design features. Both hard and soft wires can be purchased on the market. Both of these options are suitable for connecting the cooking device. 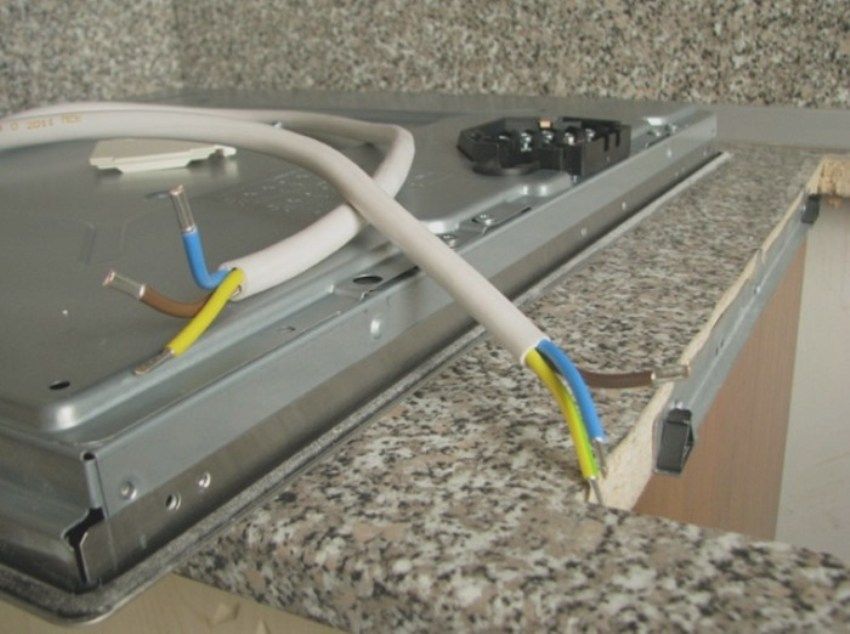 Note! When self-installing the hob, in addition to the wire to connect, you will need to purchase a network cable separately. Such elements are not implemented with the slabs, as there is no way to know in advance the number of phases in a particular building.

Experts recommend cables that have good resistance to open flame. There are several types of wires that are most suitable for connecting a hob and oven. As a rule, they are all characterized by increased safety. The most common in the domestic market are the following brands:

Experienced experts recommend using soft wires. This is fairly easy to explain, since such cables are less susceptible to heat than rigid counterparts. In addition, they are more flexible, which greatly simplifies their installation. 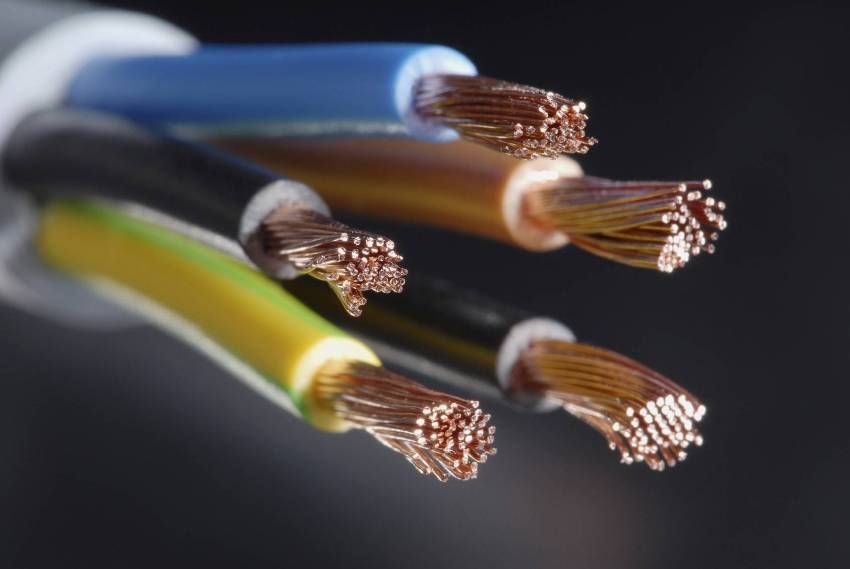 Modern models of plates that are integrated into the tabletop, most often have compatibility with all types of phases. There are two strictly defined network standards in Russia:

Separately, it should be said that in some houses a 220 V network can have two phases. Before starting work on connecting the hob, it is necessary to study the features of each type of network in order to understand the nuances of work. Each type of system has its own characteristic differences.

Single phase Most often, this network option can be found in residential buildings that were built a long time ago. Single-phase networks are divided into two types: two-wire and three-wire. In old-style homes, single-phase systems have a voltage of 220 V.

First of all, you need to deal with a two-wire network. It should be noted that its distinctive feature are the wires of one color. Phase detection in this case is performed by using a probe (a screwdriver equipped with an LED) or a special tester.

Single-phase switching is quite common. In rare cases, such a network may have wires of the same color. In such a situation, it is recommended to use a tester that will allow you to more accurately determine the purpose of each wire.

The two-phase network, which has a standard voltage of 220 V, is extremely rare. As a rule, such communication can be seen in new buildings. To indicate the phase in this case, black is used (less often – brown). Zero has the usual blue tint, the earth is determined by the yellow-green wire.

The last connection is three phase. In such a system, zero and ground have standard colors. In turn, the wire corresponding to the phase may be indicated in yellow, red or green.

Useful information! On a different scale of shades, the colors of the phases may be as follows: white, black, or brown.

The greatest number of questions arises if it is necessary to connect the surface for cooking to the network, the voltage of which is 220 V. Particularly problematic are situations when the number of panel wires does not match the number of cables in the network. As an example, you can take the Hansa electric stove. Connection of such a device is made by 6 wires. 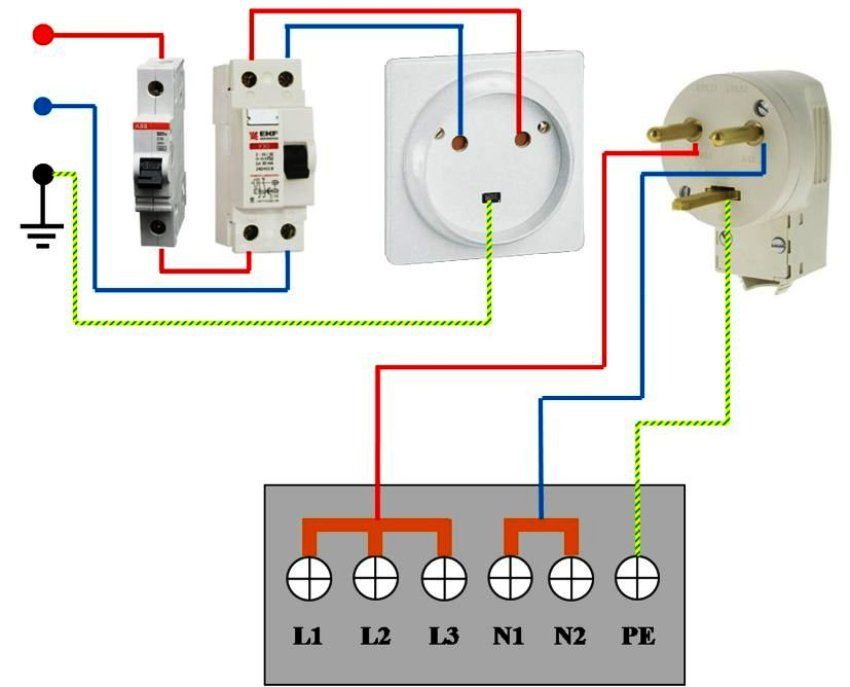 If the network includes 3 lines, then the problem with connecting such a panel can be solved quite simply. To connect in this case, special jumpers are used, which are quite simple to purchase in any specialized store. Sometimes they are sold with the device. If necessary, you can do it yourself.

How to connect the stove in this case? Before starting to connect the device to the mains is recommended to carefully study the instructions. The step-by-step process of connecting the panel to a single-phase system is as follows. The first thing to do is to find a cover on the back of the cooking surface. Next you need to open it. To do this, you can use a conventional screwdriver. The terminals are located under the cover.

In the event that there are only 6 terminals and 6 cables in the apartment, it is necessary to dock the contacts. To perform this operation, you need to connect the 3 wires that correspond to the phases between themselves. Next, one zero cable is connected to another. Land does not need to touch. The result is 3 lines.

In some models, the device already has jumpers. In such a situation, it is easiest to connect the hob. You just need to connect the wires to the network and the contacts of the appliance. Video materials on this topic will help answer the question of how to connect the electric cooker on your own.

Note! Single-phase networks can consist of only two wires. In this case, you need to act differently. In such a situation, a mandatory item is the purchase of a separate circuit that will be used for grounding. If you ignore the ground connection, then the device can fail quite quickly.

Two-phase plates are very rare. Often when self-installing such a device, people face difficulties. However, nothing complicated about it. When connecting such devices to a three-phase network, one of the cables is insulated.

Before starting the connection of a cooking device to a three-phase electrical network, it is necessary to prepare a special cable. It should contain 5 copper conductors. The cross section of each element in this case is 2.5 mm ?. And it is not so important what exactly the cable will be. For this fit both single and multicore versions. 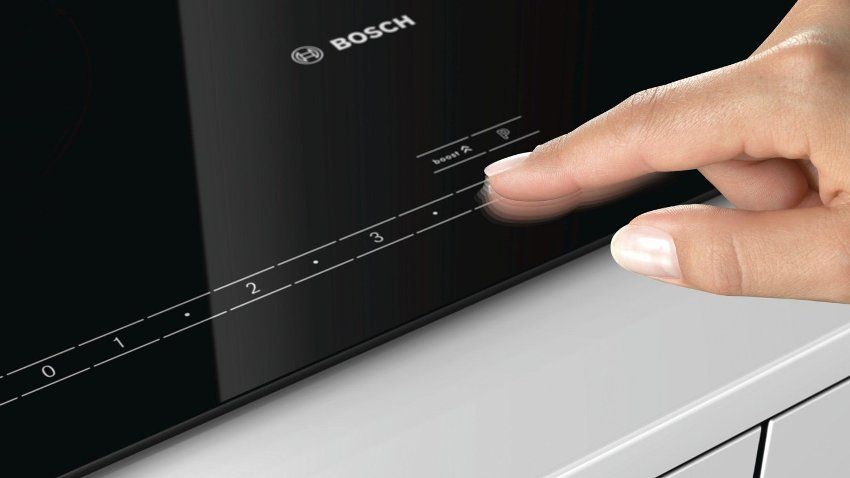 When connecting the hob to the electrical system, it is necessary to study the instructions attached to the equipment. Before starting work, it is necessary to determine the number of phases in the network and select the required plug and socket option. Another important condition is that you must follow the safety rules.

If you have to facing the facade of the house: what material is better

With the onset of cold weather, the provision of a comfortable temperature in the
A unique offer for you

Garden bench with a back do it yourself: drawings of interesting products

Sewerage in a private house: the scheme, the depth of installation

Furniture in the hall: the rules of selection and proper placement

Which ceiling is better in the kitchen: photo ideas for inspiration

What a better humidifier: how to choose the best device

Coppers of long burning on firewood for the house: device and versions

Multimeter: which is better to choose a device for use at home

The furnace fireplace for giving long burning: we create heat and a cosiness in a country house
//stawhoph.com/afu.php?zoneid=2466924