Erection of a four-slope roof frame is a time-consuming and complex process with characteristic features. It will require accurate calculations and strict installation sequence. However, the result will amaze with the solidity and reliability of the structure with a spectacular shape. Before you begin to create this framework, you should study the features and algorithm of actions, on which the truss roof system is being built. 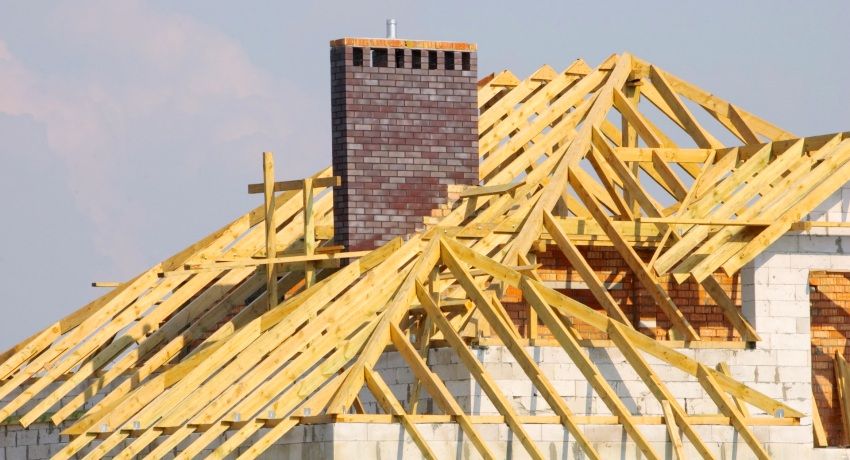 The four-slope roof consists of a rectangular base and four sloping ramps. The two end surfaces are triangular. They replace the gables, as on the dual-pitch roof. The other two slopes are called facade. Their shape resembles a trapezoid. The angle of inclination of the surfaces is in the range of 15 to 60 degrees. On sloping slopes have dormer or dormer windows, bay windows, cuckoos, which creates an even more respectable type of roofing. 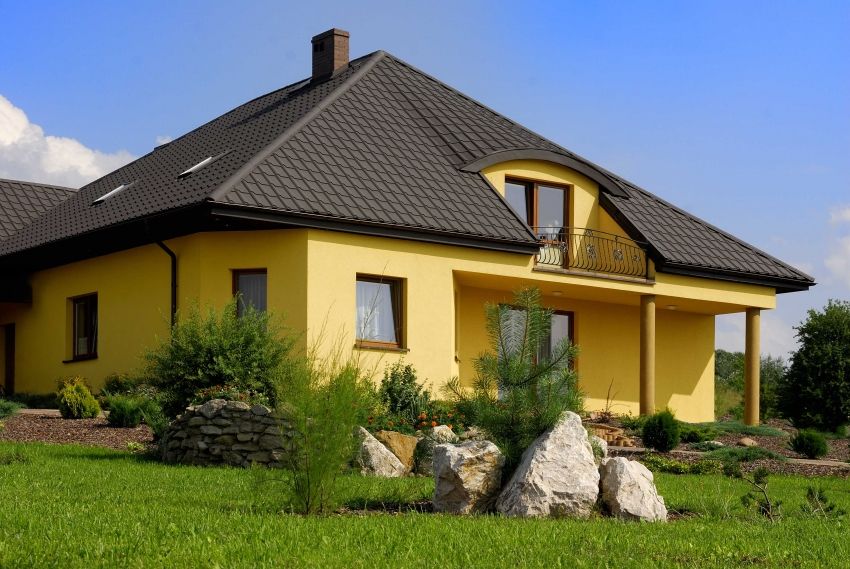 This design has its advantages over other types of mansard roofs:

The structure of the four-sided roof includes the following mandatory elements: 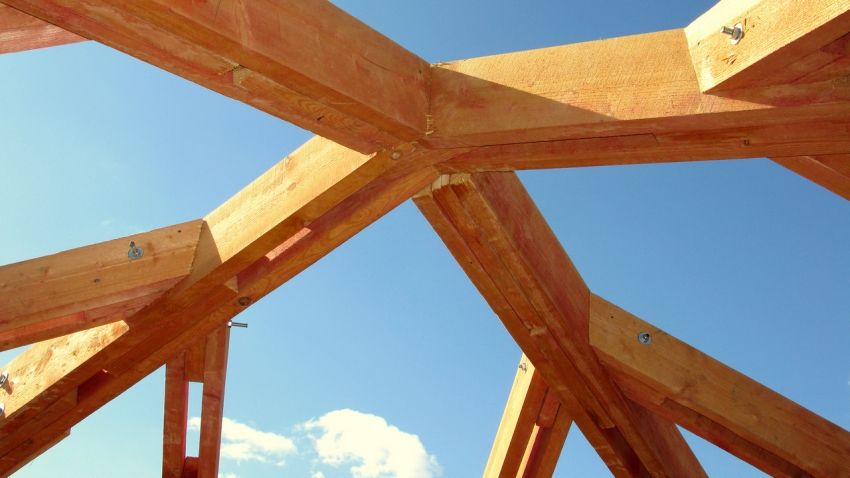 The layout of the four-sided roof allows to study its construction more clearly and in detail. 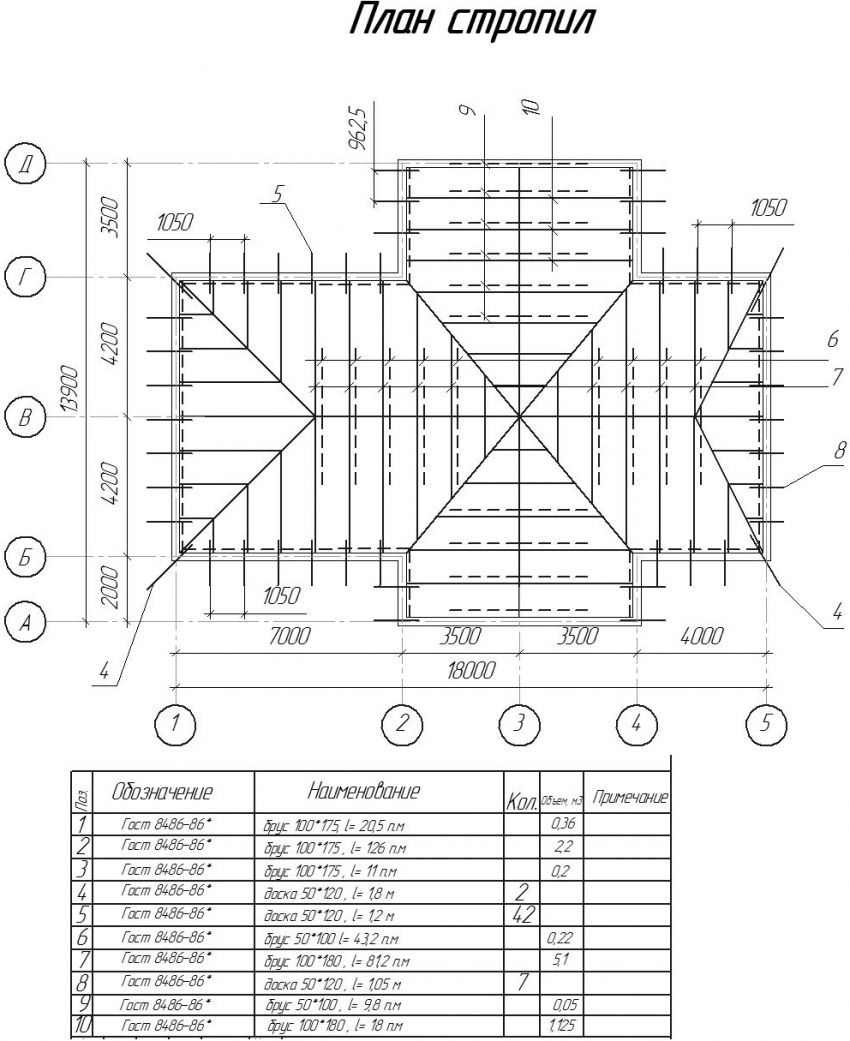 The rafter system, the photo clearly displays this, is a wooden frame on which the four-slope roof rests. It incorporates a set of obligatory and auxiliary elements, which are made mainly of coniferous wood. In the drawing truss system chetyrehskatnoy roof presents the following elements: 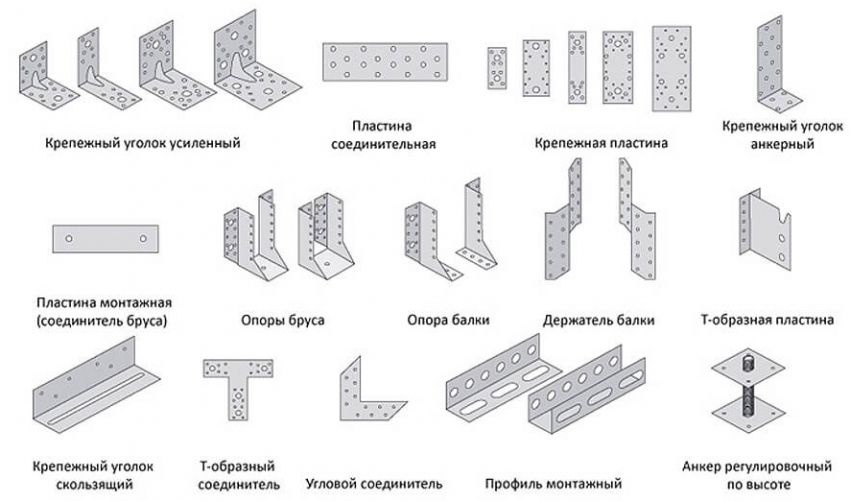 During installation of the truss system of the hitherto roof, slit, floor and common rafters are used. The suspended elements diverge from the ridge into two opposite corners of the house. They form a triangular end inclined surface. Ordinary rafters are mounted along the ridge run in pairs. They form trapezoid front ramps. The ladder elements, having different lengths, rest on the rafters with their upper part.

There are several types of structures that have the same number of inclined surfaces, but a different device.

The classic version is a hip construction, as seen in the photo of the house with a hipped roof. It consists of two triangular slopes, and two – trapezoid. The place of their connection is called the ridge, which has a length much shorter than the length of the house. The hip roof is a construction of increased complexity, in which the design and installation are very time-consuming and complex process, requiring specific skills and experience.

This construction is suitable for the base of a rectangular building. This is the most aesthetically attractive roof variant. However, the most difficult, both in terms of the necessary calculations, and by the technology of erection, because it uses a complicated truss frame, which is proved by the scheme of the truss system, which requires additional measurements and fitting the material in place. 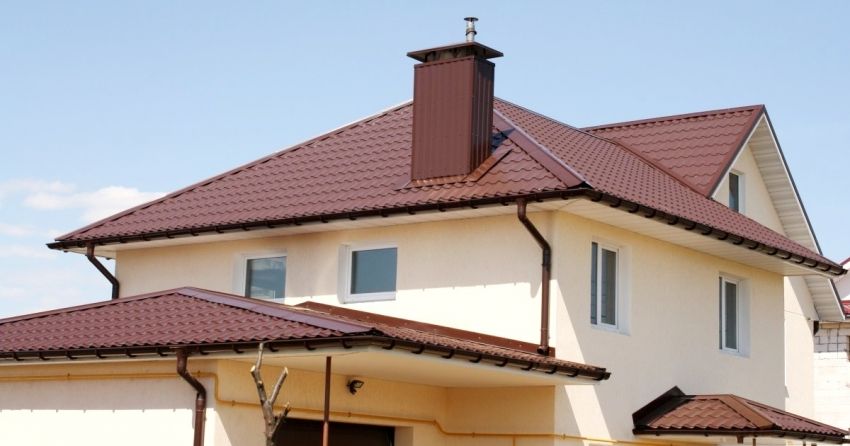 The half-hinged Dutch roof simultaneously belongs to a dual-slope and four-slope structure. It consists of two inclined trapezoid slopes and two truncated triangular hips. Small hips do not replace completely gables, which represents the possibility to install simple vertical windows, which are much cheaper than attic windows. In the photo presented on the Internet, you can see the various designs of houses with a hipped roof of this type.

The Dandelion structure has four trapezoid stingrays, which differ in size. Truncated hips do not move away from the ridge, but slightly lower, leaving room for a triangular pediment. There is usually a dormer or a vertical window for additional natural lighting, as seen in the photo of the house with a hipped roof. This design is the most resistant to strong wind. Therefore, it is advisable to arrange it for homes located in areas with high wind activity.

The four-pitch mansard roof consists of two triangular-shaped hips and two broken surfaces, with varying angle of inclination. Such a complex structure helps to obtain an overall loft with a high ceiling, which is especially important for single-storey houses. Projects with a four-slope roof of this construction are an obvious proof of this.

The four-pitched hip roof is erected on square-shaped buildings, mainly used for frame houses. Rafter system does not provide for the ridge run. The design consists of inclined surfaces of the same size and triangular shape, which are connected at the peak. 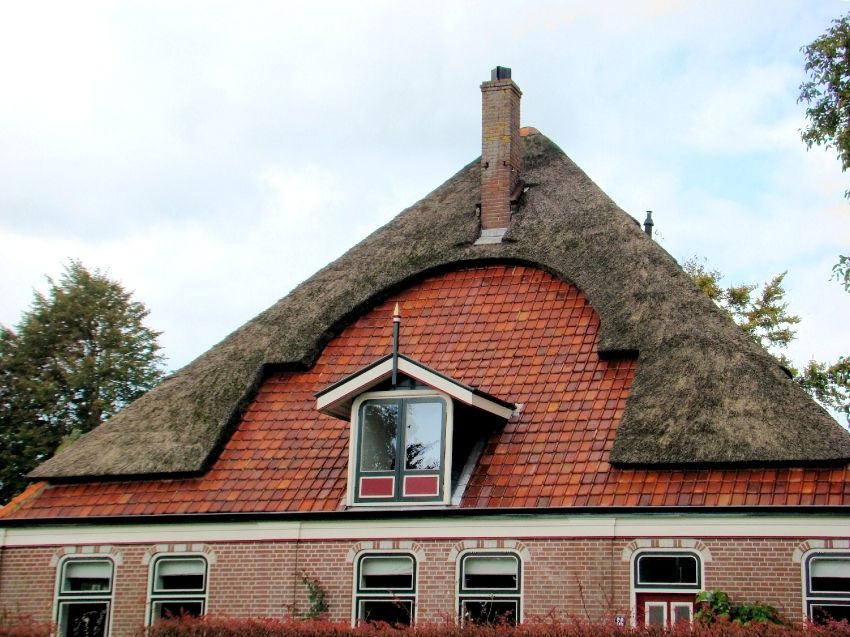 Before building a four-sided roof, it is necessary to make all the calculations, where the amount of material for the construction of the rafter frame, the device of the roofing pie and the laying of the roof is determined. The calculation can be carried out with the help of special computer programs and a drawing of a hipped roof. However, it is better to do it yourself, using the elementary mathematical formulas.

Before calculating the area of ​​the four-slope roof, a plan of construction should be drawn up with all necessary dimensions applied.

Helpful advice! At this stage, you should choose the roofing material, which will depend on the angle of inclination of the roof. The sharper it is, the longer the slope of the roof and the consumption of material is greater.

At the first stage, the slope angle is determined. It depends on the climatic features of a particular region, the purpose of the attic, the choice of roofing material, the calculation of which can be seen on the charts located on specialized websites on the Internet. 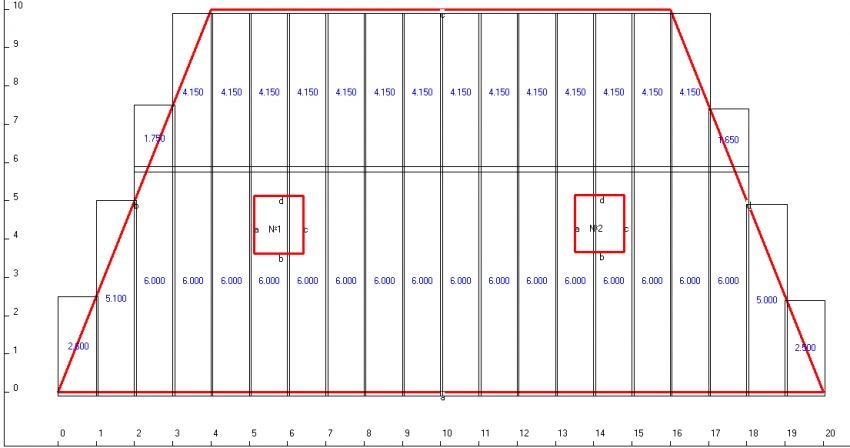 The angle of inclination can be in the range of 5 to 60 degrees. For regions with abundant precipitation and strong winds, you should choose a slope in the range from 45 to 60 degrees. If the region is characterized by little snowy winters, rare rains and low-intensity winds, then the angle can be chosen much smaller.

For a slope angle of 5-18 degrees. should prefer roll materials for an angle of 14-30 degrees. It is advisable to use asbestos sheets or metal.

Next, calculate the height of the ridge of the roof. For this purpose, special tables or trigonometric formulas for a right triangle are used. After that it is necessary to calculate the rafters, the cross section of which is selected from the load counts. It takes into account the weight of the truss structure, the roofing pie, the angle of inclination of the slopes and the environmental impact. Next, determine the step rafters with subsequent verification of their carrying capacity. 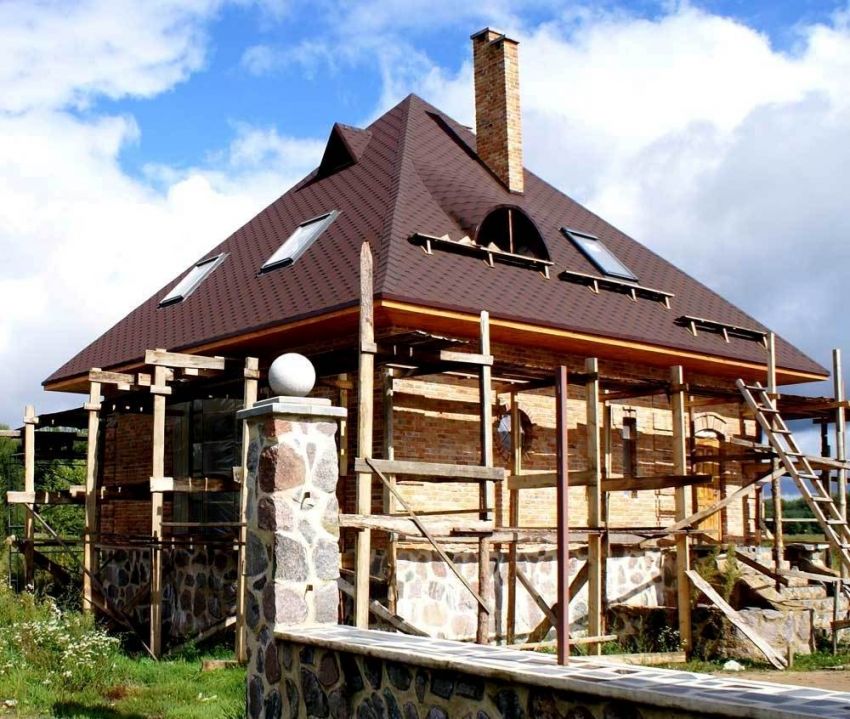 In drawing up the drawing of the four-sloped roof, you should decide on the device of the truss system. The type of truss system, diagrams visually reflect this, is selected on the basis of their method of attaching rafters. Houses with load-bearing walls or pillars supports use wall-mounted rafters. Where it is not possible to arrange a support, you should perform hanging rafters. 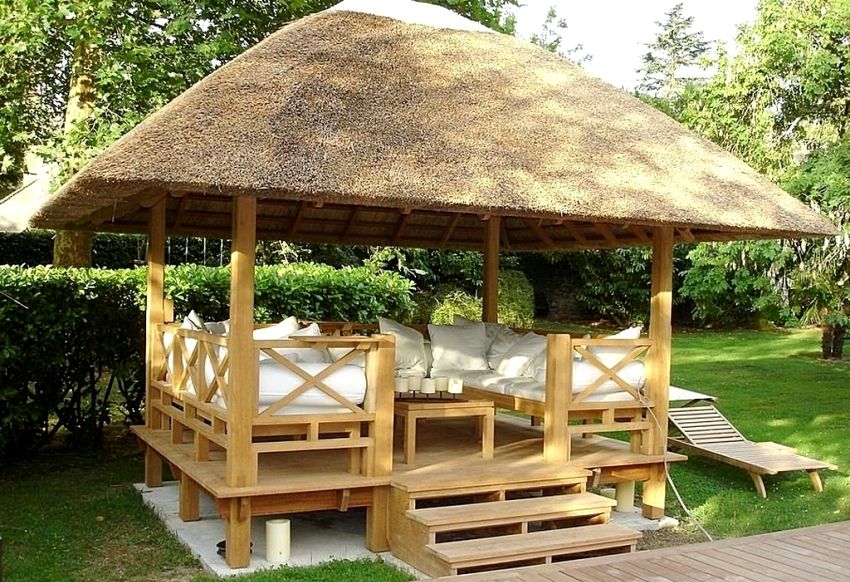 After reviewing the design features, you can safely proceed to the construction of a selected type of hipped roof. However, it should be remembered that in order to obtain a reliable, durable and durable construction, one should not neglect the preliminary calculations of the structural elements and strictly follow the work execution algorithm.

Corrugation hood: easy installation and ease of use

Rack ceiling in the bathroom. Advantages and rules of installation

Adhesive for polystyrene foam for outdoor use: which one to choose

Instrument for measuring air humidity and features of its use

Decorative stone in the interior: stylish design of the house

Tourist gas burner: how to choose a useful helper for hiking

The canopy attached to the house: photos of different types and configurations of canopies