It is obvious that the quality of the building and the durability of operating a new house depend on the quality of the foundation. With the slightest mistake, you can get certain problems: distortions, cracks in the walls, dampness in the basement, etc. The construction of the foundation is the most responsible and expensive part of the work, able to eat up to a third of the total budget allocated for construction. But all this applies when the house is built from scratch. However, sometimes there is a reverse situation: the house is already standing. What to do if there is already an old wooden house or a house made of another material? And how much is the foundation for a standing house, which requires not only the maximum redecoration or relining of communications, but also a more fundamental approach? 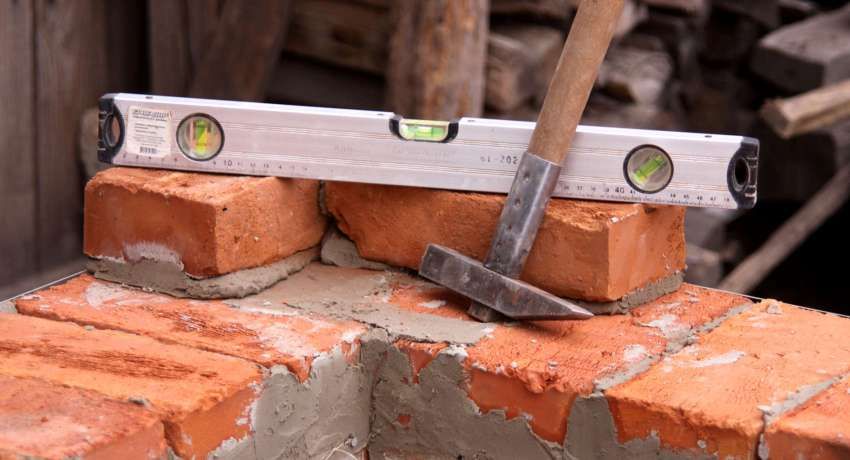 Often, if there is already an old house, only one option seems obvious: to demolish and rebuild everything anew. However, it is possible to pour the foundation for the house not only at times cheaper than a new construction site, but in some cases even without attracting additional labor. Of course, houses from different materials: log houses, brick, frame, modular – will require different technologies for the foundation lining, but still it will be faster and just as good as a complete rebuilding of the house. 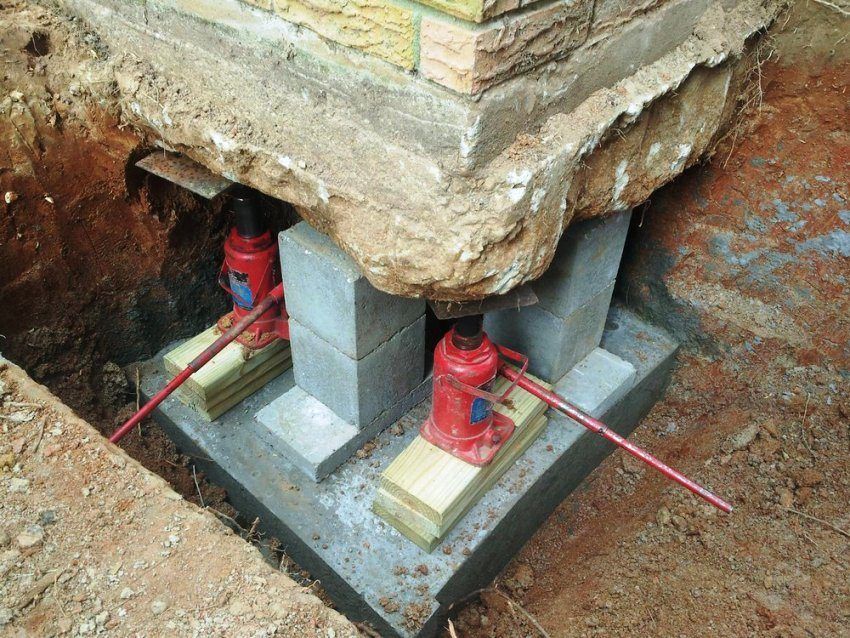 In general terms, this article identifies the types of work needed to fill the foundation for the house. With their own hands (video and photo give a visual representation of the techniques used), you can perform a large enough part of them. At the same time to determine the carrying capacity of the soil, its moisture content and the depth of freezing should invite a specialist.

First you need to understand the basic types of foundations, which are not least determined by such parameters as the composition and humidity of the soil. Only by correctly identifying the necessary type of foundation, you can correctly solve the problem – how to fill the foundation for the house. The price in this case is not the decisive factor. The most important criterion for the calculation of the foundation – the level of withstand load. 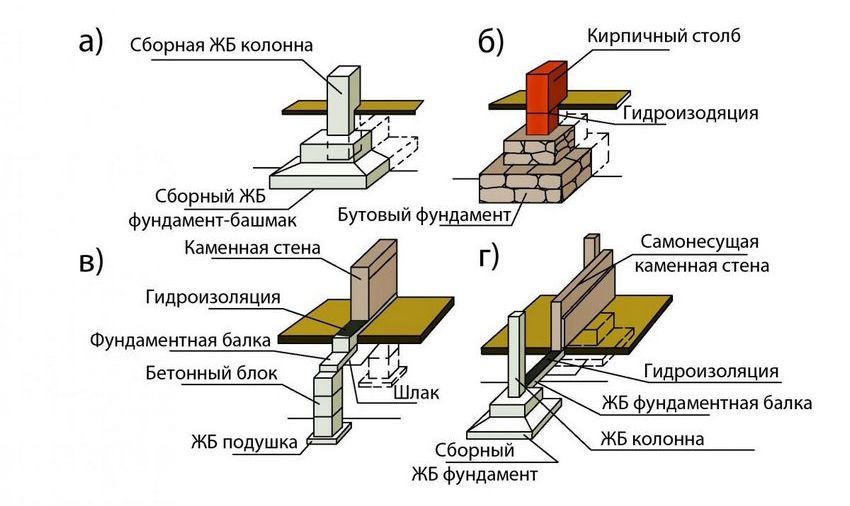 The column foundation is not designed for heavy loads, and its installation is the simplest option.

The foundation structure in this case consists of columnar bases, which are dug into the ground, and beams connecting them into a single frame. The pillars can be made of different materials: reinforced concrete, concrete, concrete, blocks, brick, natural stone, pipes (asbestos or plastic), and even wood. The depth of the pillars in the general case depends on the type of soil and groundwater level, and their material, number and cross section – of the total weight of the structure. 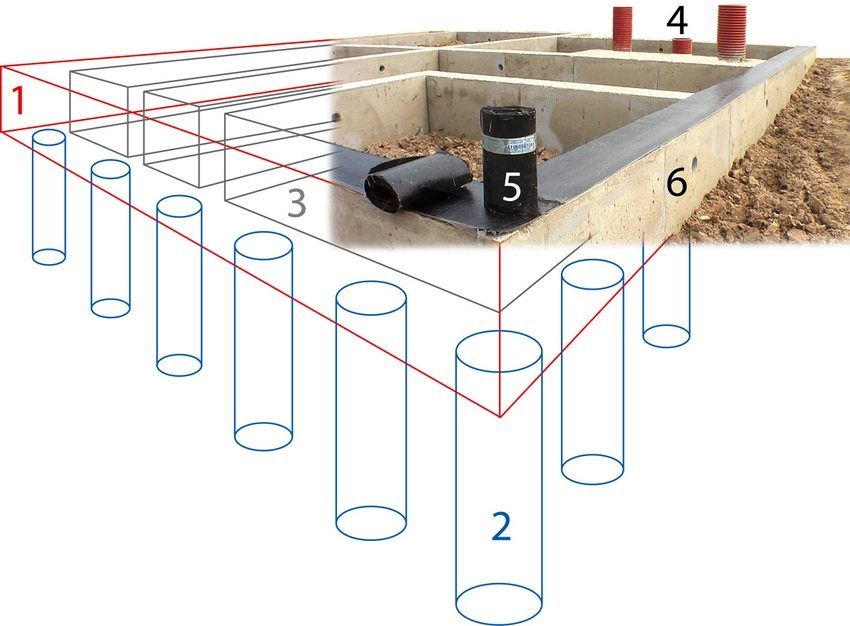 At construction it will not be required to dig out and level trenches. It will be sufficient to bring the columns under the points at which the load is concentrated: the corners of the building, the intersection of the walls and, for reliability, under the load-bearing walls. The undoubted advantage of columnar structures is their low cost, but it should be remembered that they are not intended for heavy structures and exclude the possibility of arranging basements.

The foundation of this type is able to withstand the load of a large and heavy structure, and in private construction it is used most often in the construction of cottages. 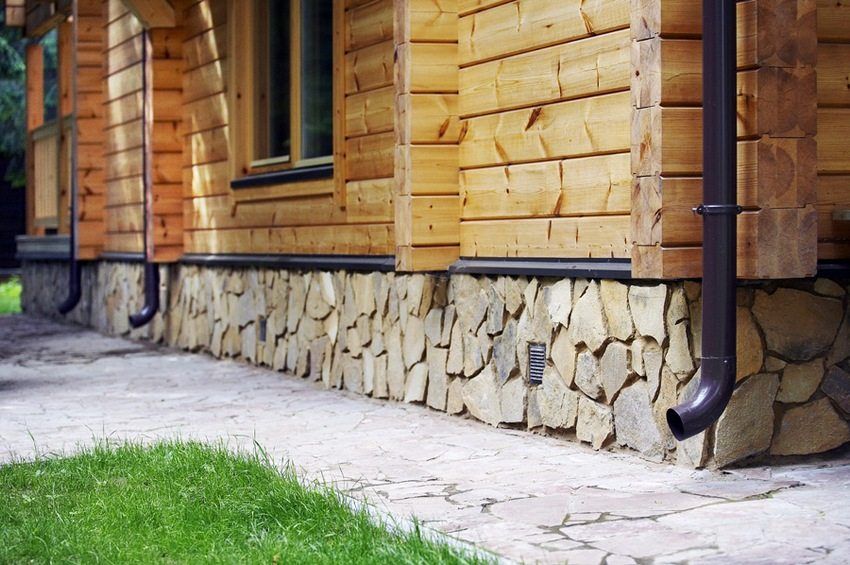 Helpful advice! The strip foundation is more functional than the columnar one, cheaper than the foundation of a solid construction, and is suitable for equipment under the structure of the basement used.

The strip foundation is assembled from brick or concrete tapes that are driven into the ground, with the option of a strip foundation based on concrete slabs: to distribute the load from the building over a large area. This type of foundation has several options for implementation: 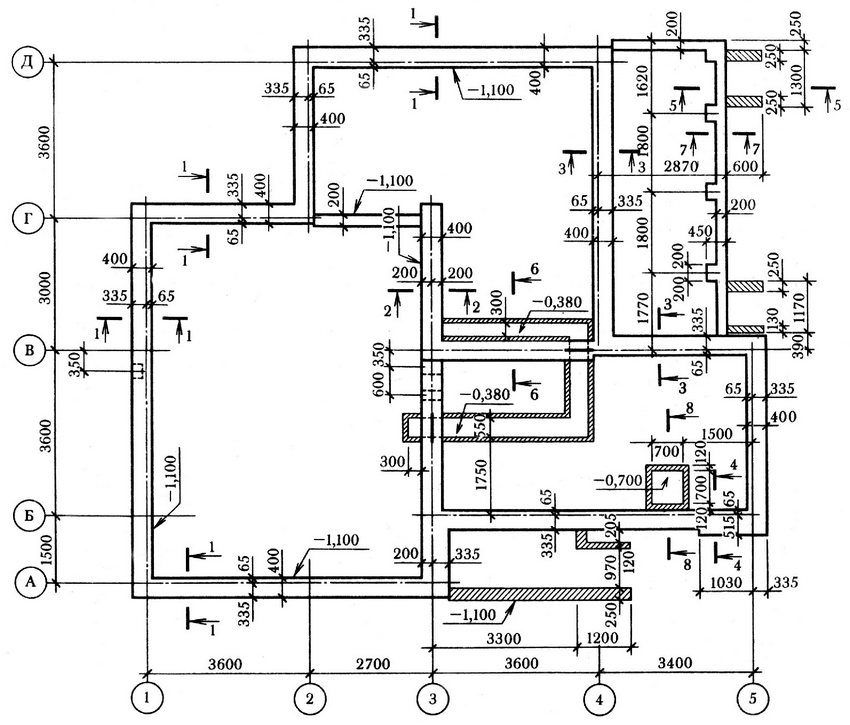 This option – one of the varieties of the monolithic basement – is suitable for unstable soils prone to heaving and movement: sandy, peatlands, saturated clays.

Interesting! During seasonal movements of soils, the slab foundation is evenly shifted along with them, therefore it is also called “floating”. 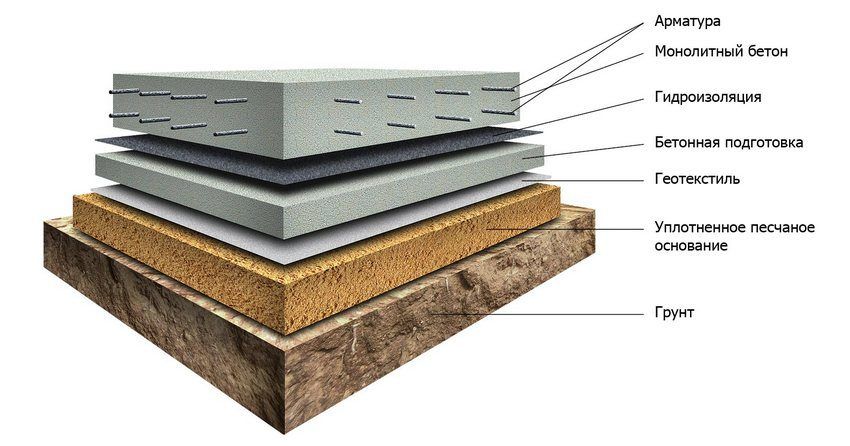 The basis of the design are concrete slabs with a thickness of 30 to 100 mm, which are laid on a prepared base of rubble and sand, poured on the most leveled soil.

Monolithic foundation is considered one of the most complex and expensive to install. It depends on the quality of the material, and its device requires specific knowledge: for example, at what temperature you can pour the foundation or determine the level of groundwater and the depth of freezing. Therefore, it is impossible to manage without the involvement of specialists: it is unlikely that you can get rid of only by independently calculating how much a foundation for a 10×10 house costs. The cost of the error may be too high. 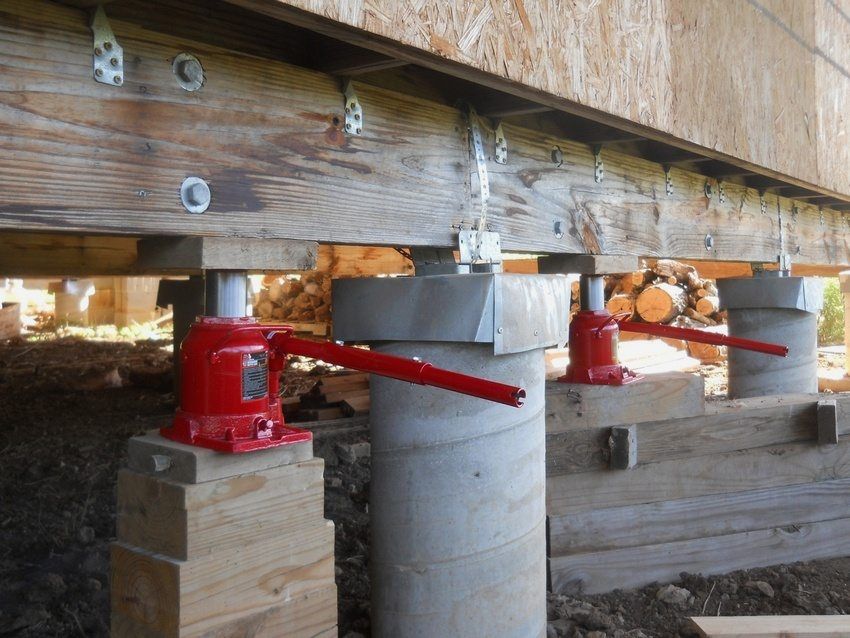 Pile foundation is different from the column in that the columns are driven in or screwed in as a drill. At the same time, the soil under the pillar turns into a tightly rammed cushion, which significantly adds to the reliability of the structure. Reinforced concrete beams and even slabs can be laid on the hammered pillars. The difficulty is that you need a scraper to drive in poles, but each of them will withstand a load of 5 tons, that is, the house can be quite large.

The simplest case is the adjustment of the column foundation. Pouring the foundation under the house with your own hands in this case is the easiest. It is enough to install additional pillars next to the unreliable ones, and then remove the ones that have served. The column foundation was not originally intended for heavy loads, so its deformations are usually associated with swelling of the soil. 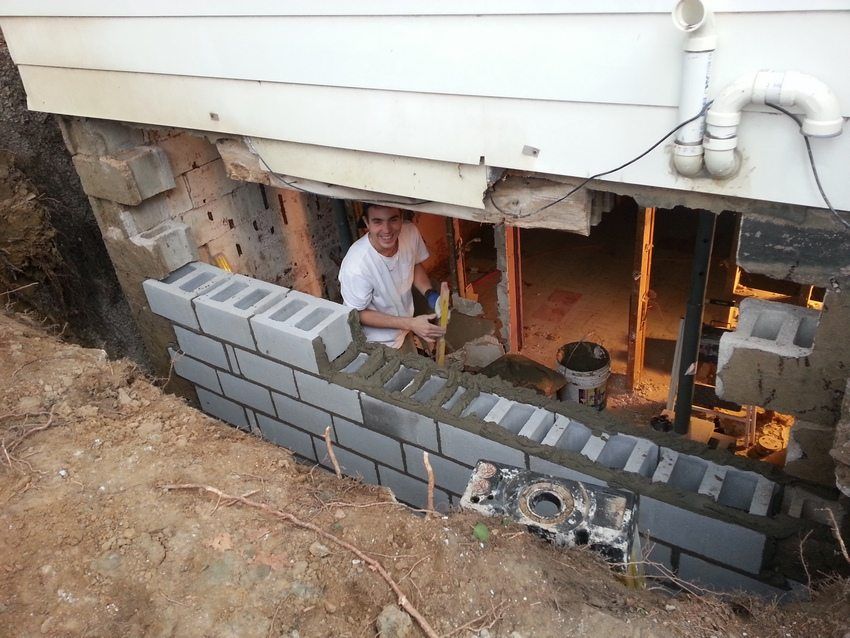 To strengthen the old brick foundation that began to break down, there are two main ways. The first is connected with gunning with concrete: a meter-long trench is dug around the entire house, the old foundation is cleaned of debris, and then cement mortar is applied to the surface of the old foundation using a special installation.

Interesting! Gunning – application under pressure of compressed air to the surface of a concrete or reinforced concrete structure a layer of concrete or other mortar.

The second method is more versatile. A trench is also dug around the perimeter of the house, holes are drilled at the base of the foundation, into which metal pins are inserted. Then the trench is partially covered with rubble, and the pins are welded together using metal beams. The resulting reinforcement is poured concrete.

If the foundation is not destroyed, but is “loosened” under the influence of dampness, then you can do with the device of a concrete shirt. In a shallow trench around the house, anchors are driven into the base of the foundation and are wrapped in a reinforcing mesh. The assembled structure is also poured with concrete.

Practically all the options for a global solution to a problem, how to pour a foundation for a house, boil down to a simple idea: raise the building to the height necessary for mounting the foundation, mount it, put the building on it. Theoretically, it looks very simple, in practice it may turn out that it will be possible on your own only to calculate how much the foundation for a standing house costs. 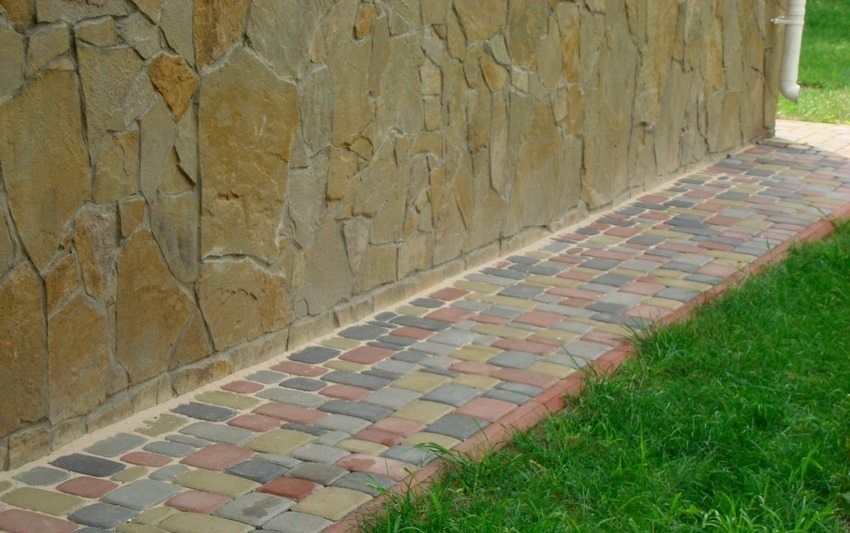 If it is necessary to raise a brick house, then special jacks with a load of 20-30 tons are used, but here one cannot do without a specialist, as the brickwork is not a monolithic object and can crack along the joints with the slightest mistake.

But in order to raise a log house, you need at least two jacks with a lifting capacity of 5 tons (optimal use of 4 jacks on a small house of 6×6 m). It is best to use specialized hydraulic equipment. It is more expensive, but at times faster. 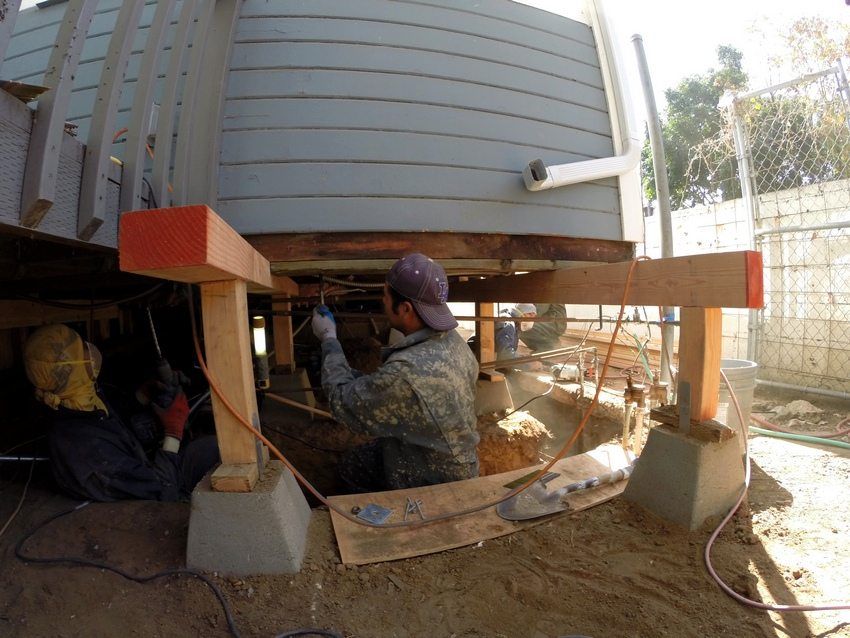 Under the house you need to put a couple of metal beams so that you can pick up the beam with a jack. To do this, trenches are dug along parallel walls, then using a jackhammer or a sledgehammer partially break through each other in the old foundation, into which the beams are slid so that they stick out at least half a meter on each side. It is necessary to lift a log house from the most sagging corner of the building, and every 5 mm of the ascent should be insured by erection of supports. In order for the jack itself not to go into the ground, it is enough to lay a thick sheet of tin up to 10 mm thick or a couple more bricks under it. Then, in turn, each jack lifts the house in increments of 5-10 mm.

However, there are other options to “raise” at home, if only a gap is formed between the ground and the base of the house, enough for a person to work lying down. But in any case for the preparation of cement-sand mixture will need Portland cement M400 or M500. 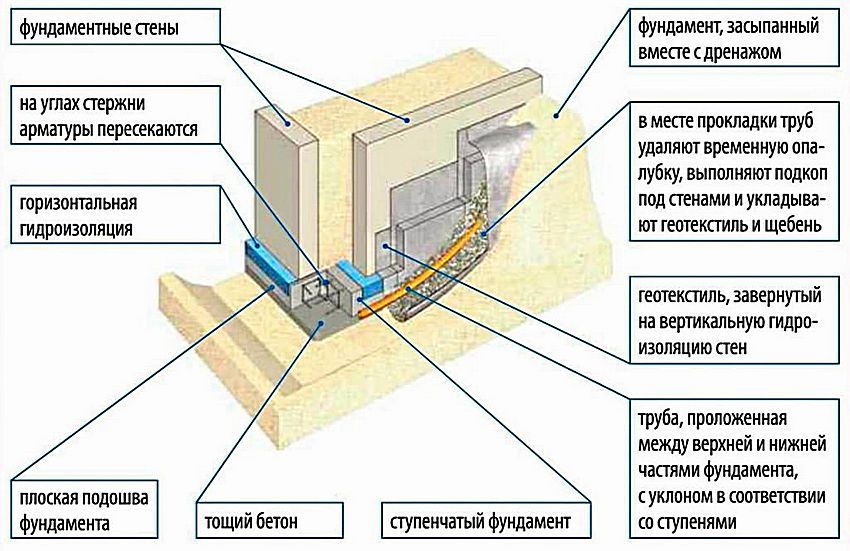 Another part of the foundation that can be done by yourself is formwork for the foundation. Photo instruction with step-by-step fixation process will help to understand this more thoroughly.

It is necessary to dig a trench around 30-40 cm deep around the house and, at some intervals, bring small pillars of concrete, brick or even wood under the gaps of the base of the house. After the operation is completed, you need to fall asleep a cushion of sand with a depth of 10-15 cm – this is enough for the future foundation to evenly distribute the weight pressure at home and not crack. 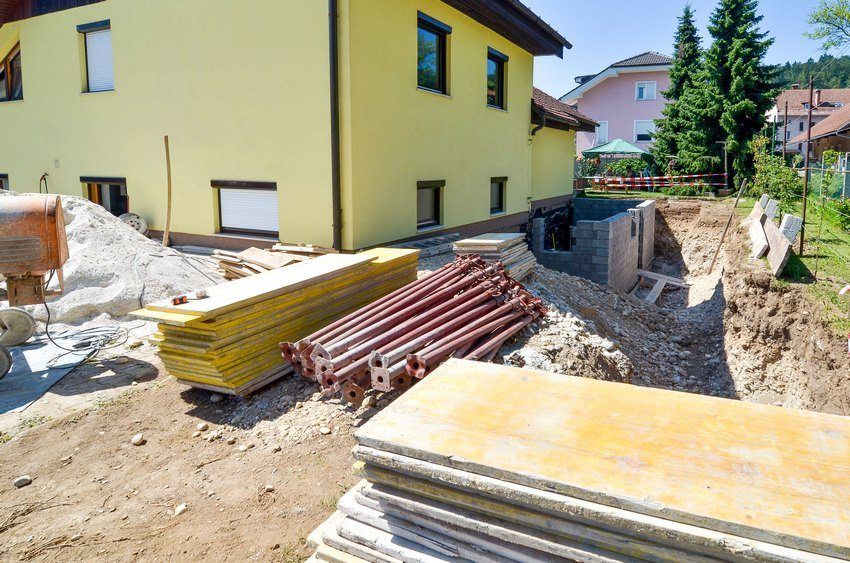 The next step is laying the formwork. From the inside of the future foundation, that is, directly under the house, you can use any boards with a thickness of no more than 2-2.5 cm. It is also possible to use chipboard or plywood. So that the concrete doesn’t bring down the formwork with its weight, you need to hammer a few racks under the house thoroughly with a sledgehammer, and connect the parts of the formwork in any convenient way, even with ordinary screws. And we must not forget to leave one hole for removal of formwork boards at the end of the work (they should not be left simply because the wood tends to absorb moisture).

It is necessary to bind the outer side of the formwork with metal, for which purpose anything metallic can be used: wire, rods, grids, nets or even any unnecessary trimming of reinforcement. 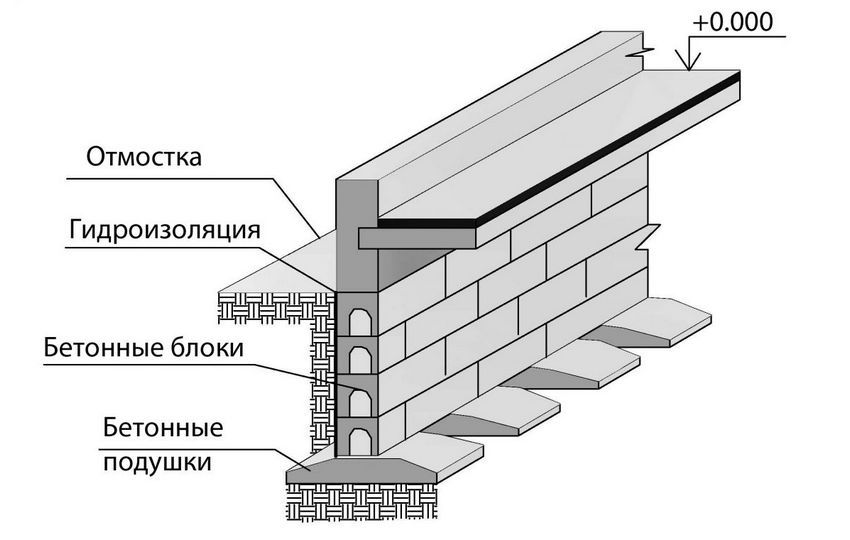 When installing the outer formwork of the foundation, you need to line it with dense polyethylene, attaching it for a snug fit to the boards with a construction stapler. A polyethylene gasket will also help to avoid over-consumption of cement mortar. The concrete mix must be viscous, so this will be more than enough. The optimum proportion for concrete is a mixture of 1 part cement, 3 parts sand and 2 parts fine gravel.

From this article, you can learn the features and nuances of the use of

Comfortable conditions for recreation at the dacha can be achieved in different ways. Along
A unique offer for you

How to build and insulate a garage?

Water boilers: a review of the best deals on the market today

Clinker tiles for interior walls. Types and features of installation

Submersible pump for a well with automatics: types and principles of operation

What is a counter grill for: device, installation and what to do if it is not there

Slopes on the installed plastic windows do it yourself: video and installation instructions

220V voltage stabilizer to give: how to choose a device to protect equipment