The classic version of the form for the foundation and walls in monolithic houses is a temporary structure that is made of wood and chipboard. Expanded polystyrene fixed formwork is an alternative construction method that does not require waste. This design increases the strength of the building and increases its energy efficiency, acting as thermal insulation. However, this material has some features that cannot be ignored. 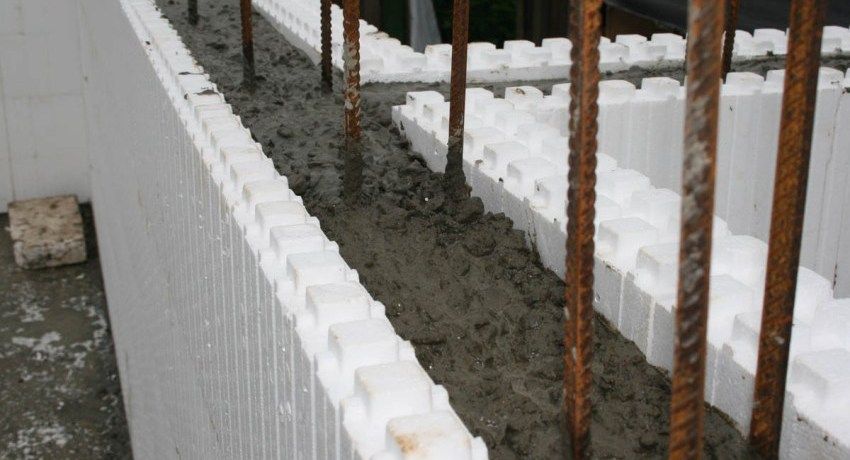 Manufacturers of this material point to many of its advantages compared with the standard options for construction formwork. These advantages need to know every person who has decided to use the fixed type of construction of expanded polystyrene.

The advantage of the permanent formwork of this material primarily lies in the fact that this design has auxiliary functions. The main one is the organization of forms for the walls and the foundation of a monolithic building. Due to its physical qualities, polystyrene foam is a good insulation. This is a very important property, since formwork of this type cannot be dismantled after the concrete has set.

If boards are used for formwork, they must be dismantled. Wood is not a heat insulator, therefore polystyrene foam blocks are considered a more profitable investment. Permanent formwork of this material allows you to build a lightweight concrete structure. Moreover, such a building retains by 30-35% more heat than a building with an analogue of red brick. Thus, the use of polystyrene reduces the cost of other materials from which the foundation or walls are made.

An alternative to polystyrene foam forms is plastic formwork. The price for such a construction is somewhat higher, but it is more durable. Non-removable plastic items can be purchased at the hardware store or place their order online. 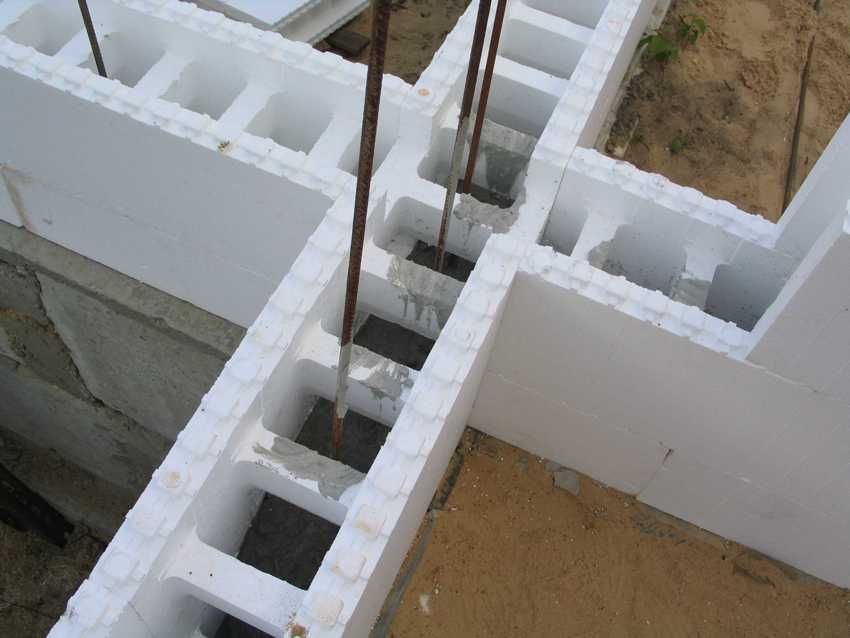 Another advantage of these forms is that they protect the reinforced concrete from moisture. In winter, this is especially important. As a result, due to polystyrene foam blocks, the operational life of the foundation and walls is increased by approximately 20%. Quite often, this fact pushes people to use such formwork for building a house. Expanded polystyrene is performed various (in shape and dimensions) elements.

The price of ceiling formwork made of expanded polystyrene is usually the determining factor in its selection. However, the most useful property of such forms is that their use allows maintaining the structure of concrete at low temperatures (but not below +5 ° C). Concrete in this case hardens in a normal mode, which has a positive effect on its qualities after solidification.

In turn, pouring concrete material into a wooden form gives a completely different result. In such formwork (at low temperatures) concrete hardens faster, and its structure is broken. 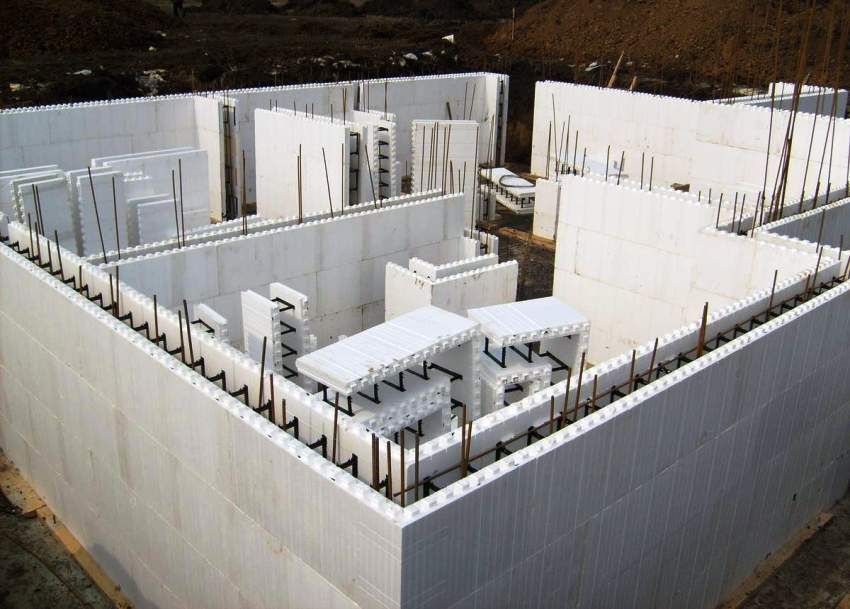 Such designs have their drawbacks. Some of them are quite substantial. For example, one of the most serious drawbacks is the fact that a building made with this formwork cannot be rebuilt. Therefore, its design is recommended to think in advance. In addition, all communications located in the building must be laid during the construction phase.

The house of permanent formwork is carried out according to certain rules, which are very important to observe in order to obtain a reliable construction that is resistant to adverse environmental factors. The blocks made of expanded polystyrene require careful installation. It is very important to observe tightness, because otherwise moisture will penetrate into the voids.

Another disadvantage of this technology for the construction of residential buildings is that foam polystyrene molds cannot be used at temperatures below 5 ° C. In this situation, the concrete simply will not harden. In hot weather, concrete requires additional moisture, as otherwise it will harden incorrectly. 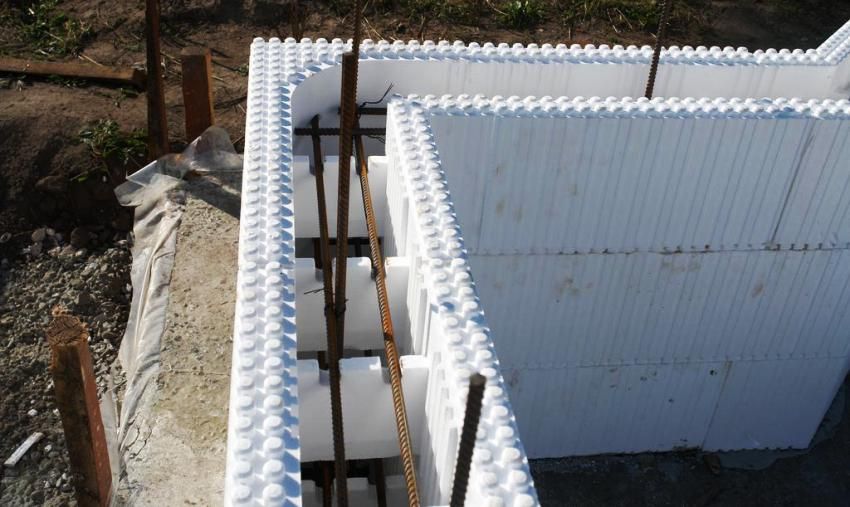 It is also worth noting that fixed formwork blocks made from expanded polystyrene prevent normal ventilation of the concrete structure. The solution to the problem in this case is the installation of ventilation communication. This compulsory system will provide the necessary ventilation, while maintaining the high efficiency of the non-detachable design.

Before installation, it is necessary to study various options for fixed formwork that can be purchased today in the construction market. The main attribute by which these products are classified is the material of manufacture. The choice of raw materials depends on the complexity of the future construction and its individual characteristics. Consider the raw materials from which forms are most often made for concrete.

Styrofoam. Many people are interested in the question of what is polystyrene foam. This material is a standard raw material used in the production of fixed formwork. The second name of polystyrene foam is gas filled foam. It is characterized by a number of positive qualities that determine the popularity of the use of molds made from it. 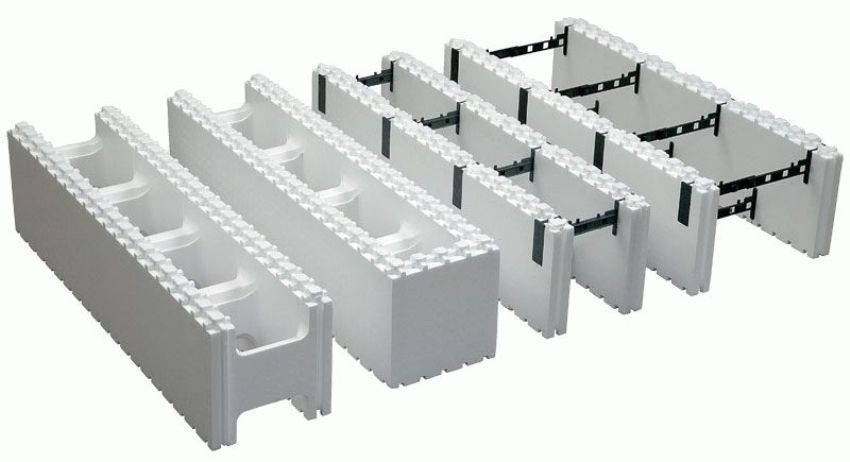 Wood concrete This material includes 2 main components: wood chips and concrete. Separate elements of a fixed timbering of wood concrete are presented by blocks. They have empty gaps, which are reinforced during installation and filled with mortar. The advantage of this raw material is that it has high strength. The soundproofing qualities of wood concrete are also its strength. Of the minuses of this material used for the manufacture of formwork, we can note the low thermal insulation and high cost.

Fiberboard. This raw material, like the previous one, consists of 2 components. The first of these is wood chips, which provides the fibrous structure of the individual elements of such formwork. The second component is an inorganic binder. The main advantage of this formwork – resistance to temperature fluctuations.

Chipocement. Such material is considered less popular than the above options for fixed formwork. The technology of chipocement has its own nuances. Of the advantages of this material is to provide a very good sound insulation and resistance to temperature fluctuations. 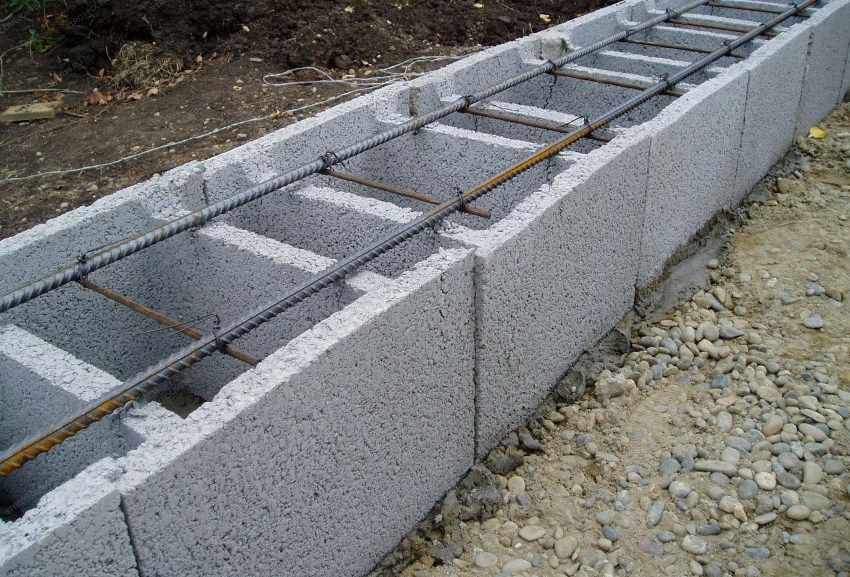 Today, there is the possibility of installing permanent formwork of foam panels. This option is quite common, as it can significantly save money when building a house. Penoplex is a material used for insulation and having good strength characteristics. This allows it to be used as concrete forms.

Penoplex slabs have dimensions of 60×100 cm. The dimensions of these products prevail over the parameters of standard structures made of expanded polystyrene. In order to install the formwork around the penoplex house, it is necessary to perform the correct calculation of the material. It is also important to understand that such products do not have their own locking elements. Thus, before purchasing the material, it is necessary to think over the system of fastening the individual parts together.

Using penoplex allows you to reduce financial costs to a minimum. This is especially felt when compared with the costs required to build a standard construction. Slab formwork on telescopic racks, wall panels and the use of plywood will be much more expensive. 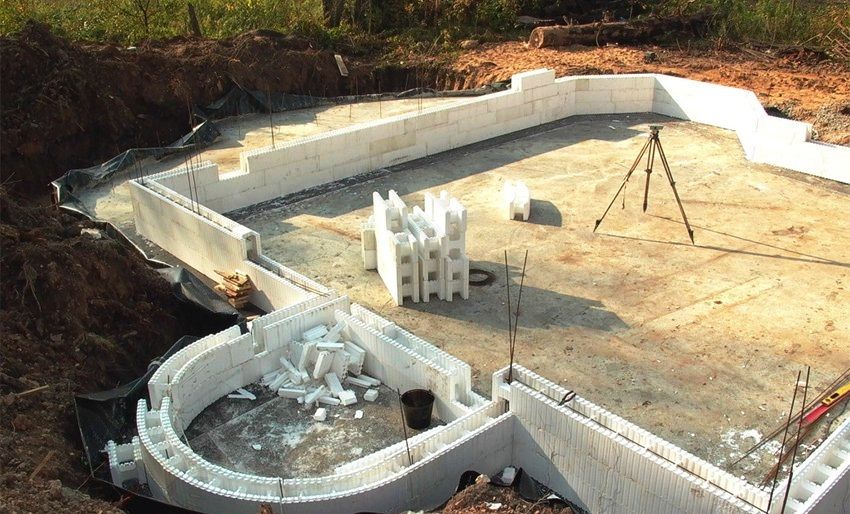 Useful information! A common variant of the organization of retainer parts – the use of special jumpers, which are equipped with thread on the edges. Such elements are made of reinforcement. The main thing you need to remember – the installation of such jumpers made between the plates of the penoplex.

A similar embodiment of the design is less expensive, but at the same time more complex due to the selection of fixers. The price of fixed formwork from expanded polystyrene is higher, but its installation does not require unnecessary actions. If necessary, clamps can be purchased for foam-foam slabs, which are used when mounting the polystyrene foam structure.

The formwork elements can have a different design, which is determined by their operational purpose. Today, there are such variants of these products made from expanded polystyrene: 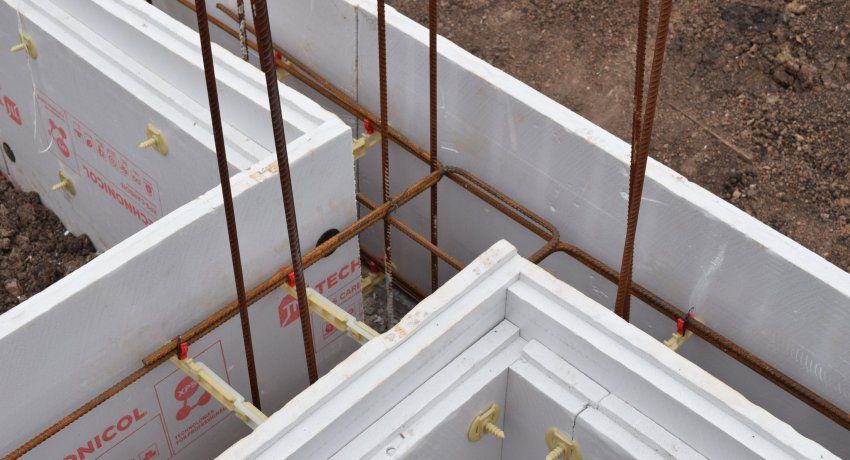 Systems related to frame, are dual-circuit structures, between the walls of which there is an empty space. When mounted inside such formwork reinforcement is laid and the solution is poured. If you make a section of the finished wall made according to this technology, then it will be possible to distinguish three layers: two outer ones represented by the formwork, and the middle one – from reinforced concrete.

The blocks of foam are divided into two large groups: cast and prefabricated. During the assembly of the formwork, these elements are arranged in such a way that they are located on top of each other. And for joining no adhesion mixtures (for example, glue) are used. Blocking is carried out in a staggered manner.

Cast products are also called thermoblock. This is due to the fact that they have a fairly high density (up to 40 kg / m?). Features of the structure have an impact on thermal insulation characteristics. A block of this type consists of 2 sheets, which are joined together by means of special jumpers. The assembly of such parts and the connection of their individual elements are carried out at the manufacturing stage. It is worth noting that such structures have one drawback: they warm up rather poorly. This is due to the location of the insulation from the inside of the cake wall. 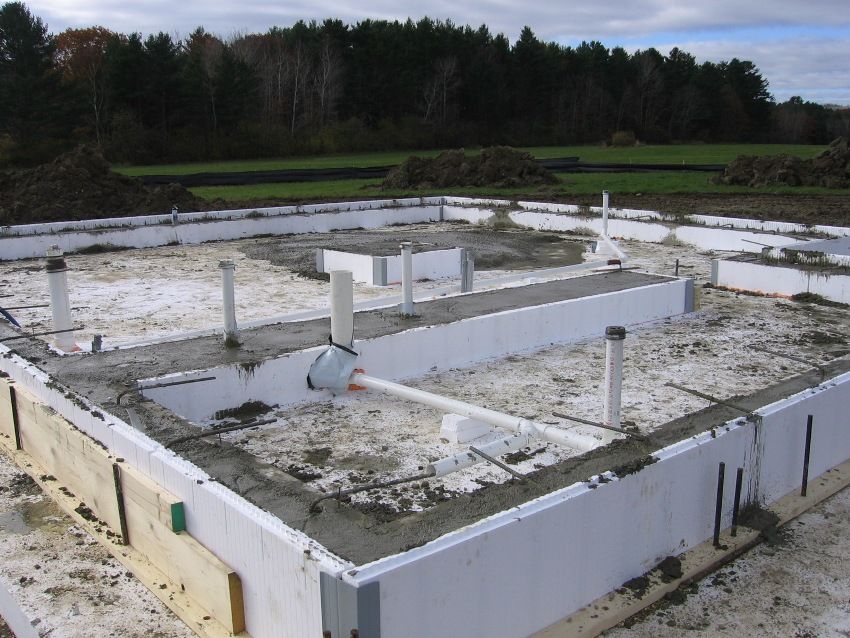 The sizes of blocks of molded formwork foam will vary. However, products with dimensions of 1000x250x250 mm are considered the standard version. The mass of such a block is usually about 1 kg. The thickness of the insulation located on both sides (outside) is 50 mm. Accordingly, the same indicator of the concrete layer will be 150 mm.

Supporting elements are used to hold the wooden structure, which is made of laminated plywood for formwork. The price of 1 sheet of this material varies from 600 to 3,000 rubles.

Fixed forms are a good alternative to standard designs that are made of wood and plywood. Such formwork allows not only to pour concrete, but also serves as a reliable heat-insulating material. It is actively used in private construction, but requires a study of the installation instructions and compliance with safety regulations.

Accommodation in country houses and cottages is accompanied by some difficulties with electrification, heating
A unique offer for you

What insulation is better for the roof of different designs

How to make a strip foundation from FBS blocks for a house correctly: construction technology

Waterproof laminate for the kitchen: all about quality coverage

Shelves in the bath with their own hands: step-by-step instructions for assembly and installation

Wear-resistant paint for concrete for outdoor use and its application